After a couple of planned and then aborted attempts to head down to Coulter, I finally managed it, forecast was good so in an effort to beat the 'commuters' heading into Edinburgh I left home just before 7am and even at that time both lanes over the Forth Road Bridge and beyond were nose to tail

Arrived in Coulter and the parking area at 8.15 so after kitting up I was off along the road at a nice brisk pace. I had the route programmed into my phone via Maverick and after about 10mins I suddenly realised I had left the spare phone battery in the car

So with that hiccup on my mind, I missed the turn off uphill, so I had to double back and decided to take a short cut up a steep snowy slope in an effort to get back on track The initial road before you head uphill ). Having said that it was still hard going, the surface was either soft snow, hard snow, ice or a combination of all three The first view of one of my favourite cash machines, even being almost the same whitish colour, they don't exactly blend in with the surroundings The first summit of the day Hudderstone has to be one of the least obvious, only when you look in every direction do you realise that "this is it" Looking across to Tinto A random mast, that I am reliably informed monitors the wind speed for the cash generators

After taking a few photo's near Hudderstone the going got really tough, the footprints I had been following were non existent, so it was now down to me to pick my way through the tufty terrain. There has been vehicular activity as the tracks were visible, however at times walking on the tracks was like being in Kirkcaldy Ice Rink (where Fife Flyers play) - sorry couldn't resist it

Most of the walk involves following what seems like never ending fences, however when you can see what looks like the the highest hump or better still a summit, why not take a short cut

I was also warned by Pete R (thanks)

to expect much bogginess, I did very well and only manage to find bog underneath the snow twice, so that was one good reason to do this round in the winter

The summit of Hillshaw Head was reached after what seemed like and was a real struggle, this is the most southerly part of the walk, but unfortunately the going didn't get any easier The summit of Hillshaw Head, enhanced by my poles and gloves (again) The way ahead to Gathersnow Hill Interesting snow formation, thought they were footprints until I got nearer

Once again I was having to trail blaze across to the next summit of Gathersnow Hill, it was a bit of slog uphill but I knew I was now past the halfway mark so psychologically it was a bit of a turning point Another underwhelming summit - Gathersnow Hill, interesting as it hasn't got that much snow on or near the summit The way up Culter Fell from the bottom of the glen The walk up from the bottom of the glen was really hard going, the good news was that there were a few foot steps to utilise, I have to confess I stopped plenty of times purely to take photo's

Eventually the summit of Culter Fell was reached and it was pretty cool, so after the usual photo's I was about to leave when a chap appeared, we had a brief chat and he told me he was just going to head down to the reservoir and back to the car, mainly due to the time

The descent of Culter was pretty steep in bits, it was also fairly slippy so I decided to create my own descent path

It was during the descent that I had an attack of cramp in my right thigh, I have never had that happen before certainly not whilst walking - I put it down to over exertion and hard going, maybe I need more practice in walking in winter conditions 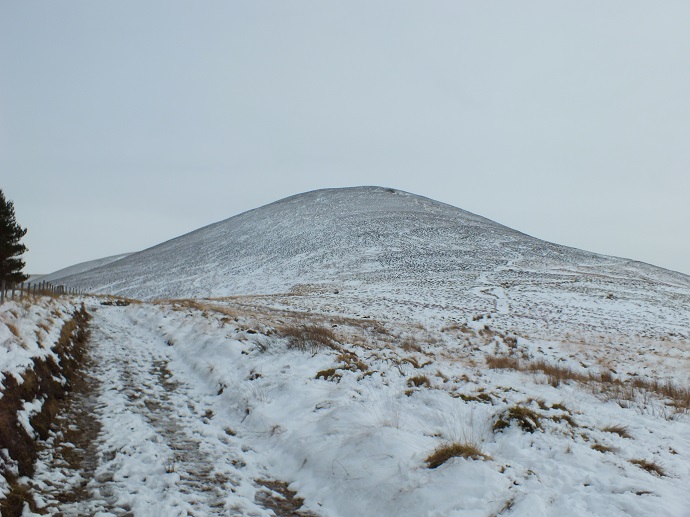 Final photo looking back at Culter, doesn't look that steep

Got home at 3.30 and getting out of the car, another bout of cramp which was not overly pleasant

Fantastic day, but I have to admit that was probably one of the hardest days I have out in the hills. It also highlights the fact that you don't need Munro's to have fun and a tough day

Nice report and a good hard day, I think you made very good time for the conditions. I agree that the route from Hudderstone to Hillshaw Head is a real slog and very hard work. I hope the random mast that you picture is not a precursor for more turbines, there are enough in the area already.

Tinto63 wrote:I hope the random mast that you picture is not a precursor for more turbines, there are enough in the area already.

Totally agree, they litter the Borders

I didn't realise you did this route in the reverse to me Martin. I did CT first and then endured the bog fest at the end

Still looks good in a coat of white, although I'm with you on the turbines

They are so huge you can lose the sense of scale sometimes when you see them next to the trees (which I used to think looked big). It just seems to be an ever increasing march of the Triffids and not wishing to start a whole debate going, I'm not convinced they generate sufficient in terms of power to warrant their destruction of the countryside

Good effort FF - looked like a tough but rewarding day.

I keep meaning to head to this part of the world at some point as my experience of Donalds is limited to the Perthshire/Stirlingshire one's - maybe give the satnav a shock one day in Spring.

Looks like a good day out! I think the "interesting snow formation" is indeed a set of footprints (possibly a fox) that have been left behind as the wind eroded the snow around them, and also protected the snow downwind of them, hence the long tails!