Ive always wanted to do some winter climbing by moon light. this week there was a full moon and a weather window that could not be missed. being mid week it had to be some where local so i choose the cobbler. a quick post on my climbing club website and i was soon joined by 4 other club members who wanted to join me,. Billy, Fraser, Peter and Jim. i originally wanted to do central gully, but i hadnt done this before and with it being a grade 2/3 and some recent snow fall me Billy and Fraser opted for chalkstone gully followed by great gully as we wanted something without a rope. Peter and Jim opted for south east ridge and arete which is grade 3 so they had ropes and gear with them.
We set of from the car park at 6.15pm and headed up the icy path, the full moon was out and there was no need for head torches. once out the forest the views were superb, the moon was lighting up everything and it was an unusuall experience heading up for a climb at this time. we split with Peter and Jim just after the dam, wished them luck and we headed up past the narnain boulders. ive not really got the words to describe the beauty of the views all around, all i can say is that what was to come ahead was one of my best times out on the hills. i wish i had a nice camera to capture what i was experiencing, but i didnt, i got a few shots from loads that i took but most where just blurred images. 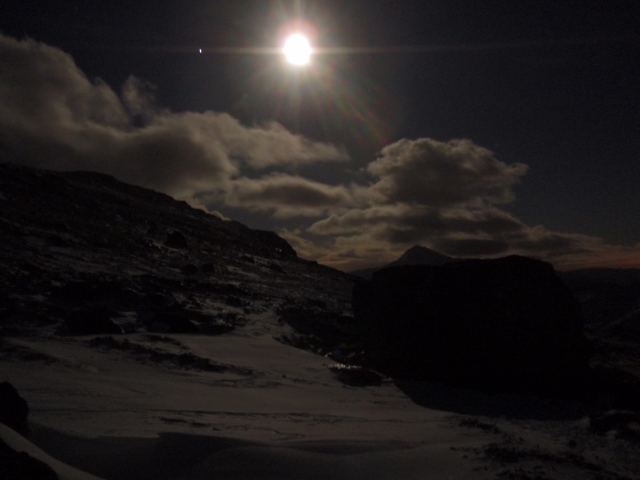 once past the boulders we cut of left up the climbers path, before the last little rise we traverssed right toward the start of chalkstone gully. 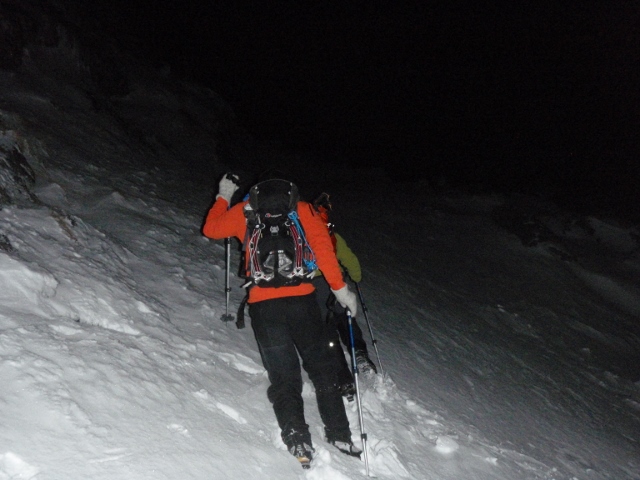 traversing over to the gully

snow was quite soft and the turf wasnt as frozen as i thought it would be, be we were soon in the gully and heading upwards. 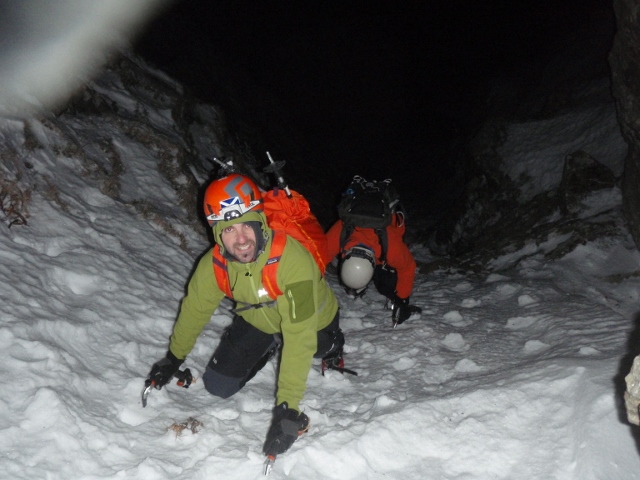 Billy and Fraser in the gully

we were soon at the chalkstone, 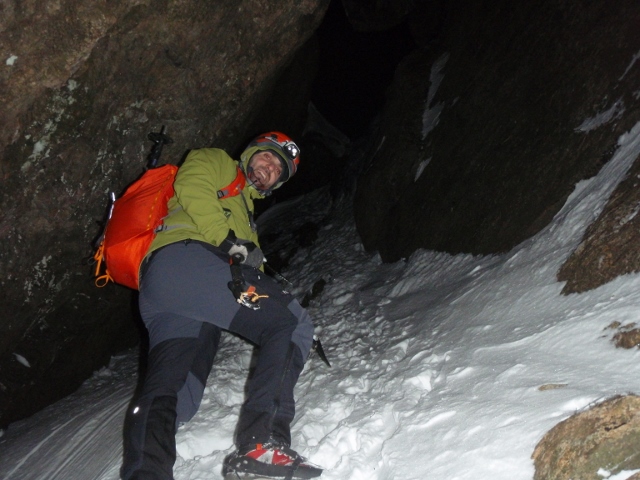 there was some good neve when needed at the step up and onto the wall above the chalkstone. the 3 of us were enjoying this strange but absorbing night. once over the little wall we were out of the gully. 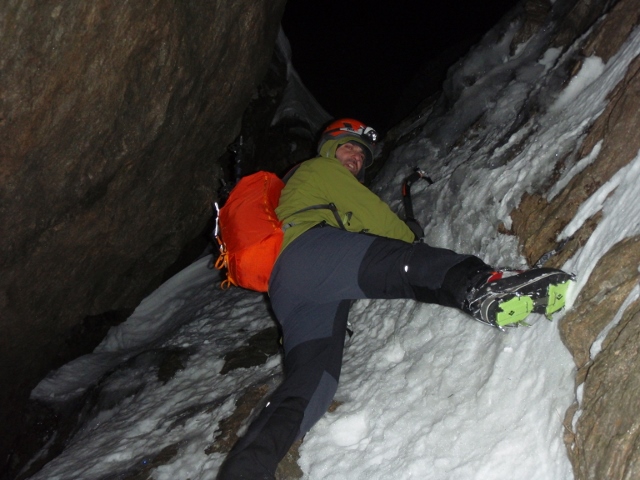 once out of the gully we walked round and up towards great gully. much the same as before with only one little move we were soon at the top of the gully and at the north summit. the views were fantastic, you could see for miles and seeing the light in the citys and town just topped everything off. view to summit from north summit

we then walked over to the summit. we sat and lapped up the moment, one of my best moments in the outdoors. we sat and had cuppa and a snack, we were hoping to meet the Peter and Jim, but headed down after our stop. we could see their head torches on the ridge so we headed down to the car park. im really sorry that my pictures and words don't do this trip the justice it deserves, all i would say is if you get the chance to go out on a similar night the don't miss it.
ps, got a txt at 2 am from the boys saying they were safely of the mountain.

Aye need to do this one day .... great stuff

I love being out in the snow at night.. although for us its usually walking up to a camp spot on a Friday night, there is just something special about it

Excellent stuff, thanks for sharing.

Great stuff, did the same route today in the sun - cheers for breaking trail!

And there is me thinking that a late afternoon was a late start up a mountain!

Great pictures in my opinion and what a great adventure!!

no , not a blatant attempt to plug my own trip report

the next full moon is next thursday 5th march, i will be keeping an eye on the weather, here is hoping for some clear skies

I feel an idea beginning to formulate in my mind!

Brilliant - always worth getting out on a clear night with sonw on the hills!

thanks spiderwebb, no tripod im afraid, just jammed the camera in the snow and thankfully a few came out. tripod is on the "need to get" list.