Fairfield.gpx Open full screen  NB: Walkhighlands is not responsible for the accuracy of gpx files in users posts
I hadn't done much walking in the Lake District or anywhere else for that matter, just some of the smaller Wainwrights, Binsey, Little and Great Mell Fells, Gowbarrow, etc, and a skirmish or two into the Howgills. Until I met Joe. I was introduced to Joe by my wife who was a friend of his wife's. Joe knew his way around the LD and I needed to.

The conversation turned to walking and a suggestion that we have a walk together. Joe was seventy years old at this time and although I'm no ageist I did wonder how this would pan out. I agreed and he asked me where I would like to go. "Don't know really" I replied, "not familiar with the hills and mountains" says I. "Okaay then, sort out a route, get back to me and we'll decide on a day to do it" he said.

The route shown in this report is the one that I chose after looking at the map and various walking books.

I set off from Glenridding car park with Joe at 08:45hrs whilst the weather was cool as it promised a very hot day ahead. And so it proved to be. The walk took us up to Greenside Mine and then along the path which runs under Glenridding Common and eventually reaches Kepple Cove and Brown Cove. We had a good look around the old mine workings and the dam at Kepple Cove before climbing the rather narrow and slippery scree like path up the northwest ridge of Catstycam at 889m. There was a very hard rainstorm in October 1927 which caused the dam to overflow causing considerable damage so it was decided to breach the dam to prevent such like occurrences in the future.

The weather was hot and sunny until we reached the top of Catstycam where the mist was down and the temperature much cooler. The mist cleared occasionally with the strong breezes until later in the day (just after noon) when the mist cleared and good views were seen all around.

We then took the obvious route along Swirral Edge to Helvellyn at 949metres to the summit and from there we then dropped down onto and along Striding Edge and then reversed the route back over the Edge and climbed back up to Helvellyn. This memorial plaque is situated on Striding Edge itself. This one is seen as you clamber over the top of the climb back onto Helvellyn. From where we then continued onto Nethermost Pike at 890m, High Crag at 884m, and Dollywagon Pike at 856m. I remember Joe looking across the valley at Fairfield, Cofa Pike etc, and asking me if I was feeling up to it as "there's a bit of a handful to go yet lad." I looked across at what was still to come, took a deep breath, said three Hail Mary's and put my life in Joe's hands. We then dropped down to Grisedale Tarn. Grisedale Tarn with Seat Sandal in the background.

From the Tarn we then ascended to Cofa Pike at 760m and then on to Fairfield - which was covered in mist - at 873m. Leaving Fairfield we then descended back along the ridge and over Cofa Pike once again to reach Deepdale Hause. 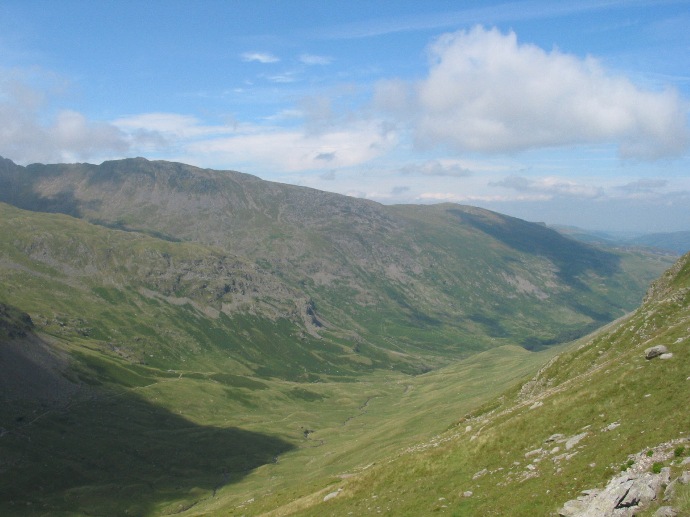 From the Hause we then went on to St. Sunday Crag at 840m. By the time we reached the summit I was flagging a bit whilst Joe the elder was 50 metres in front of me and going like Red Rum. So much for me wondering how this would 'pan out'. I needed a drink badly so got stuck into my water, ah! that's better now.

The temperature rose as the day went on and was very hot on the way down from St. Sunday Crag as we pulled in Birks before making our way back to the main path into Blind Cove, under Harrison Crag, and off down Thornhow End to reach Patterdale.

It was then a long weary walk back along the main road to Glenridding, but we did get an ice cream at Glenridding Boating Centre. We arrived back at the car park at 17:30hrs after having a brilliant day all round.

I walked with Joe for many years until illness stopped his gallop for quite a while. Boy could he walk. Only last week we went out together and took a stroll up Loadpot Hill and Wether Hill from Roehead just outside of Pooley Bridge. Pushing 80 years young and managing 17.5km and a height gain of 749 metres in 4hrs 17 minutes. There was snow at height, strong winds and stinging hailstone but never a murmer of complaint from him. A great inspiration to the young ones never mind the old 'uns.

Looking forward to the next one.

Lots of ups and downs on that trek!!
Great pics.

I hope I'm as sprightly as 'Joe the elder' when I get to his age !

onsen wrote:I hope I'm as sprightly as 'Joe the elder' when I get to his age !

Nice to hear from one of our antipodean friends. Spent some time in Queensland but mostly work. managed two little hills, Mt. Tambourine and Mt. Gravat.

colgregg wrote:Lots of ups and downs on that trek!!
Great pics.

Aye! Like Joe said, "a bit of a handful lad." Thanks for your comments.