With a mid week rest day due and the weather forecast looking good I set off for the hills around Loch Awe. I arrived in the layby just before 8am. the view from my car

The fist hour was spent walking up the track opening and closing the gates and avoiding the locals..until I reached the fork the road. 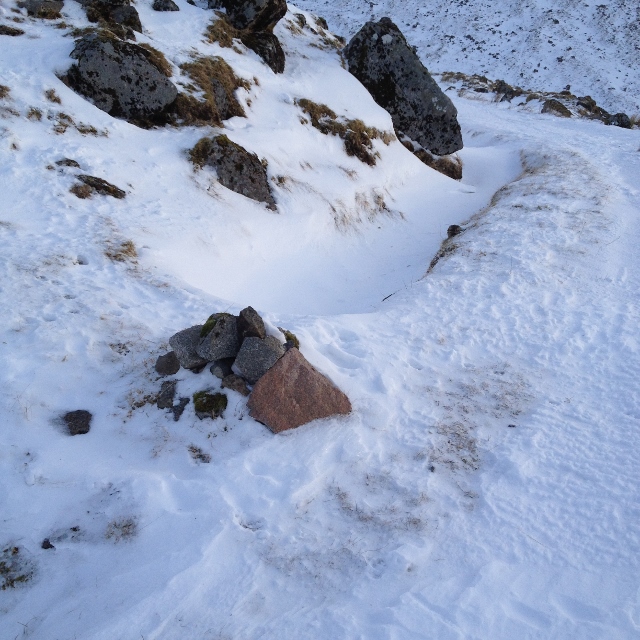 the small cairn marking the start of the assent .The snow at the start was firm and it was easy to kick steps into the snow but it wasn't till later on that the going got easier when I was able to reach the scoured section. Once on the ridge I put on my crampons as there was solid ice under the snow , the going was much easier now that the hard work had been done. I stayed well away from the edges at I made my way to the summit of the 1st Munro of the day. . I had been sheltered from any wind or wind chill on the way up but it had picked up as I'd walked along the ridge and I was now glad I'd put on a merino base layer under my trousers, on the way up they had felt a bit much and I had contemplated taking them off... glad I didn't. It was cold enough to freeze the water in my drinking water pipe within minutes but I realised later just to tuck the pipe away under my jacket to let my body heat defrost it. The view's from the top were fantastic and I guess that's why we're willing to walk in winter on days like these. 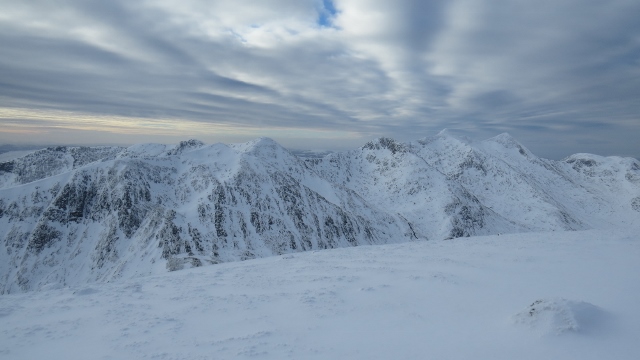 It was now 11:38am and after a quick txt to my wife to say I was moving off towards the next Munro ( good phone signal here all day

) I head off back along the ridge line. The snow had been shallow most of the day but this section at approx. 728mtres just above the bealach on the leeward side was knee deep. . Now it was time for another climb, I find it easier to break bits like this into section's in my head instead of one piece, aim for that bit..done..now the next bit..done.. almost there I'll tell myself each time a section is completed. This bit felt like the slowest part of the day but once on the top again it would be all down hill so to speak. the shoulder leading up to Beinn Eunaich On the summit of Beinn Eunaich

It was now about 1pm so a few more pictures and another txt with location was sent before I started heading down. The descent was a mixture of snow patches and scoured grass with solid ice on top so I decided to keep the crampons on for a bit longer. thick ice on top of the grass a faint "path" down the steep section which take you back down to the track.

. The snow on the path was knee deep in places so care was taken whilst I made my way down finally making back to the track,a bit relieved that it section was done. There is a cairn here to mark the end of the path, I managed to miss it somehow on the way up

, Now it was just a case of walking back down the farmers track passing all the highland cows "locals" in the field and back to the car.

. It's been one of my more enjoyable winter walks , I'd set a time of 7hrs to do this route based on my last few walks so I'm pleased I wasn't far off it.

Some great pix there...