After my exploits in the Borders earlier in the week I decided to make the most of the lingering high pressure and head south again. After studying the map I decided to go a bit further afield, thought about The Merrick but didn't want to travel all that way for a single Corbett. I noticed Corserine could be combined with a couple of Donalds so that was the plan.
Posted my intentions as usual and Jac (jac the lassie) popped up out of the woodwork and offered to keep me company. We arranged to meet at the car park intending to start walking by 9am, we were both early which is surprising because I had forgotten how bendy the A702 is once you leave the M74 and head SW, hardly got a chance to put my foot down

The drive wasn't made any more enjoyable by extensive fog patches The initial part of the walk is through the forest along forest tracks, care was needed as the were plenty of ice patches trying to entice you into a slip up

On reaching the edge of the forest you are confronted with a fence, not a problem for us humans, but Jac had to lift her 2 dogs over the fence, very carefully as barbed wire in situ to make it more challenging. The greyhound Bella wasn't too much of a problem for obvious reasons but Ben her Black Lab required a few more muscles.
Once across the fence the way ahead is fairly obvious and the way ahead was very spectacular, it reminded me of Corrie Fee Fantastic view of the way up Looking back down to the forest

The trudge up to the summit of Corserine was hard going, very similar to my tough day earlier in the week, every step was guess work, how far down would one's foot sink

Even when the snow was crisp and firm you were still prepared to be caught out with that sinking feeling. The ascent wasn't steep it just seemed to take a while but as we gained height the views started to open up behind us, so we had to stop fairly frequently purely to take photo's Looking back, interesting patterns in the sky After all the hard work we reached the large cairn on Corserine, however the Trig point was on the far side of the huge summit plateau which in clag could be a navigational challenge

I got the map out to see what the cairn was to the north and discovered it was Carlin's Cairn, had we known it was a recognised Corbett we would probably have nipped across to say hello, especially as it didn't look too far away with not too much descent/ascent 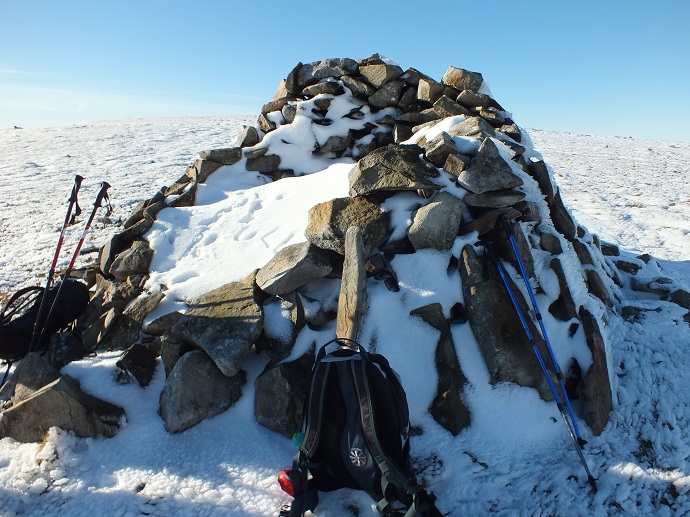 Corserine trig with Bella muscling in on the photo 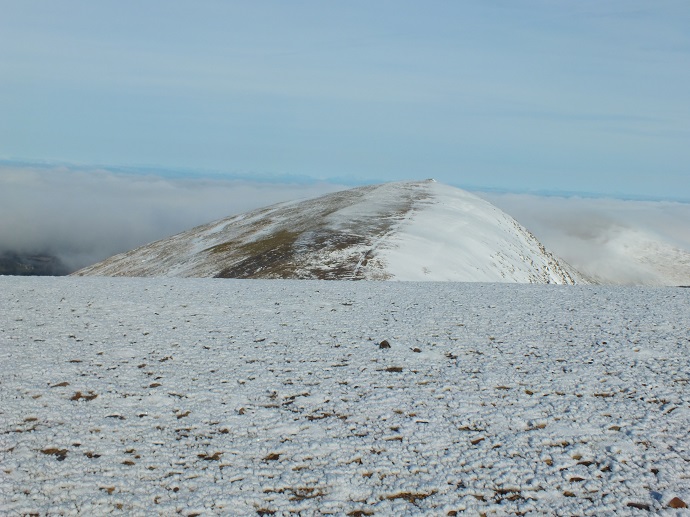 Jac and I were really surprised that we hadn't seen another human being yet, the weather was amazing, gloves weren't utilised all day and on the ascents fleeces were removed and the sun actually seemed to be generating some heat

We set off from the large summit of Corserine along a wide ridge which offered great views, but we couldn't really admire the views as we had to keep an eye on every single footstep. Some of the walk was made slightly easier by old/previous footsteps in the snow, unfortunately they were a bit random. A bit chilly on the feet The Merrick peeking up through the cloud On the final summit of Meikle Millyea (interesting name) because it was the most southerly part of the walk the view were outstanding, we could even see England The Solway Firth can just be seen

After reaching the final summit of the day we thought the descent would be straightforward, how wrong. Firstly the snow seemed to be even deeper and softer, both of us managed to find a hidden water hole

The descent follows a stane dyke wall, when we reached the edge of the forest we were confronted with a high deer fence. Jac had read previous reports and was expecting the fence, which had a style somewhere, so it was a matter of scanning the length of the fence and Jac spotted it

After crossing the style, the next task was to try and reach the track, that involved tackling an obstacle course

Fallen trees had to be clambered over prior to reaching the track that would take us back through the forest to the car park. A word of warning the track back to car did seem to take quite a long time and care should be taken to make sure you head in the right direction. The track back to the car park

A big thanks to Jac for her company, hope I didn't slow you down too much

If anyone hasn't been down this way you really should make an effort, you won't be disappointed

It would be interesting to see what these hills are like when all the white stuff has disappeared.
Next.

Braw pics Martin. You sure do get about

That's a fine day out

This lot and the Craignaw/Merrick/Shalloch on Minnoch area are much more fun than some of the flat boggy summits to the east. Some of them are very tough going too - the dreaded Galloway tussock will eventually have you screaming for mercy and wishing you were on something easier like Knoydart

Hi Martin, that looked a good day out, great weather and fantastic views, its a great part of Scotland and should be held in high regard by us all.
We have a weekend booked in Dumfries 7th and 8th of March and are hoping to do Hart Fell etc on the Saturday and something on the Sunday (don't know what yet), give m a shout If you fancy meeting up one of the days, it would be nice to have some company.

Well done on battling the soft snow. Great pictures -I can imagine being there. Any idea which hills those are above the cloud in your fifth and seventh pictures?

thank for letting us give u a chum. Was a good day out, those hills were a really pleasant surprise. Lovely photos!
Jac Great report and photos.
Shame about having to lift the dogs over the fence but there is a stile there.
It's easier to find both stiles by doing the walk clockwise and when descending from Corserine the stile can be seen about 100metres left of the burn.
I think the hills seen over the sea of cloud/fog in photos 5 and 7 are the hills of Dalbeattie forest as I had the same view last month when the sea of fog was more extensive and they cought my eye too.
We too struggled through the tree obstacle course where it is very easy to get a wet foot.

ridgerunner wrote:Great report and photos.
Shame about having to lift the dogs over the fence but there is a stile there.
It's easier to find both stiles by doing the walk clockwise and when descending from Corserine the stile can be seen about 100metres left of the burn.
I think the hills seen over the sea of cloud/fog in photos 5 and 7 are the hills of Dalbeattie forest as I had the same view last month when the sea of fog was more extensive and they cought my eye too.
We too struggled through the tree obstacle course where it is very easy to get a wet foot.

Yes, I was thinking Criffel and Screel.

You really did some great shots there Martin

In keeping with malky_c's comments all I have to say is "Shalloch on Minnoch!"

Lovely - a good walk at most times but looks even better in the snow.
Know what you mean about the obstacle course at the end

Yes, and the Lakes in the far distance, too.

We always seem to by pass the Galloway hills, after reading your report I may need to stop off for a visit, looks a very picturesque walk.

I won't thank you individually

Suffice to say, if you have never been to SW Scotland try & make an effort you won't be disappointed