Mount Battock (the most Easterly Corbett) had been on my radar for some time, that, the fact that the dogs were in need of a good run and the walk was mostly on tracks made this an easy decision for Sunday. I took the Cairn o’Mount road over to Glen Esk from Westhill which was a lovely drive. 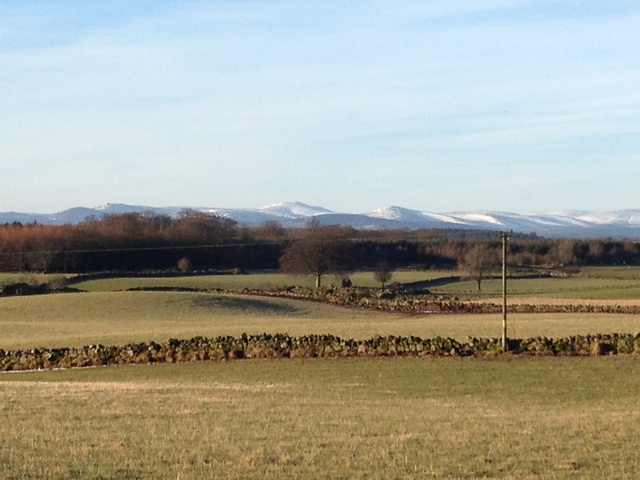 Mount Battock in centre of pic, Clachnaben on the left from my home in Westhill Aberdeenshire


our_route.gpx Open full screen  NB: Walkhighlands is not responsible for the accuracy of gpx files in users posts
I found the phone box as described in the WH route and parked up along with one other car and set off up the track towards the Mill of Aucheen. I passed a house with a mill wheel at the side of it and continued up the road to the farm buildings and took a right passing a cottage on my left with a black lab and cocker spaniel going mental. How dare we trespass on their watch? My dogs were still on their leads at this point as sheep were dotted around. I followed the track to some woodland and the track curves round to the left and follows just above the Burn of Turret below to the right. The dogs got off the leads here as no sign of sheep. We reached a gate and took a sharp right as we had to cross the Burn of Turret and the water was too deep to dance across so we crossed the two wooden bridges. 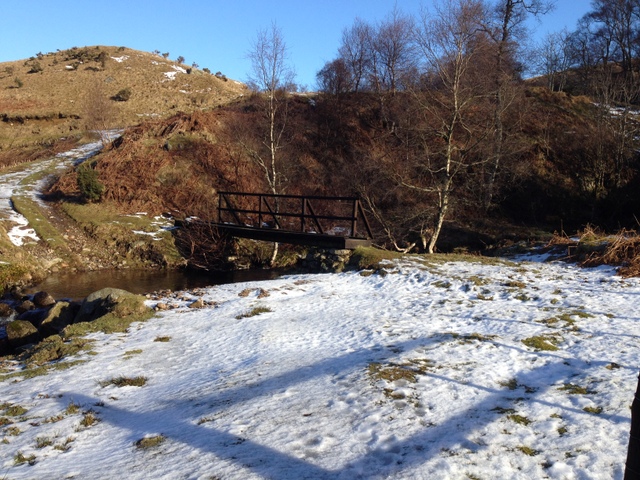 One of the two wooden bridges

We joined the track and climbed steeply after crossing the burn and ended up with our first sight up ahead to Mount Battock. 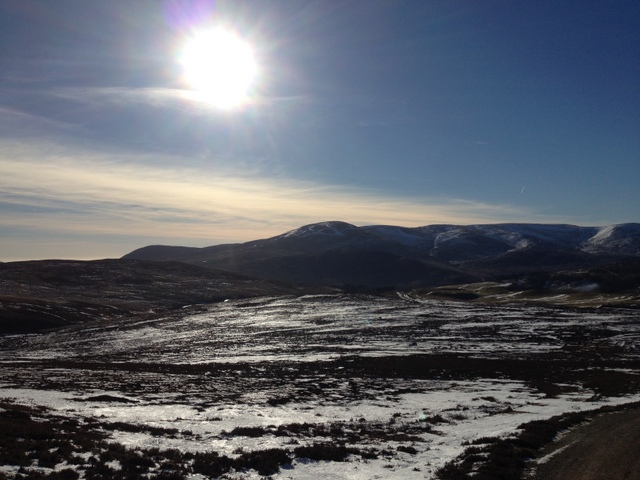 Looking back to Glen Esk

I decided on a clock wise route so we took a left at the junction where you would drop down to cross the Burn of Turret again. When I looked down into the burn I saw 2 x birds in a chase, I could not be sure but one was definitely a pigeon and the other I think was a peregrine, the wing shape, colour and speed made me think this. On seeing me it gave up the chase and the pigeon flew over my head and down the Glen. Did I save a pigeons life?

The going was really quite easy on the tracks, if a bit boring, but the weather, the views and seeing the dogs having so much fun quartering the moor really made it for me. This must be one of the most heavily stocked Grouse areas I’ve ever seen, the dogs were in their element doing as they were bred to do, scenting out grouse and sending them up all over the place. I am just glad we never came in nesting season as my shoulder would have been given a right going over with the dogs on leads all day! Up above me were at least half a dozen Buzzards circling the air, what a sight, I spent 15 minutes watching them while resting on one of the fancy shooting butts. These were built like WWII pill boxes. 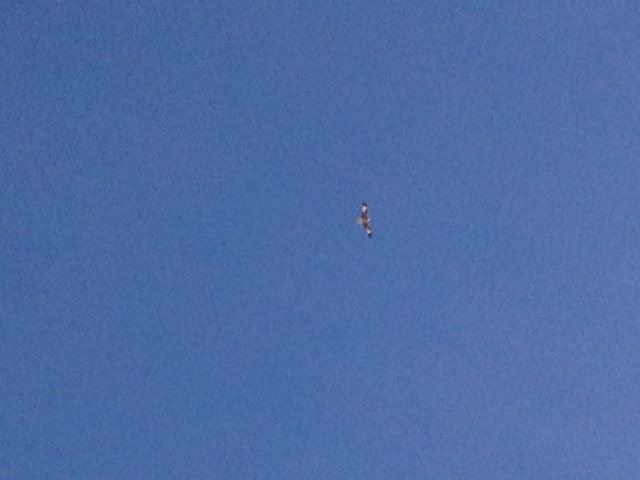 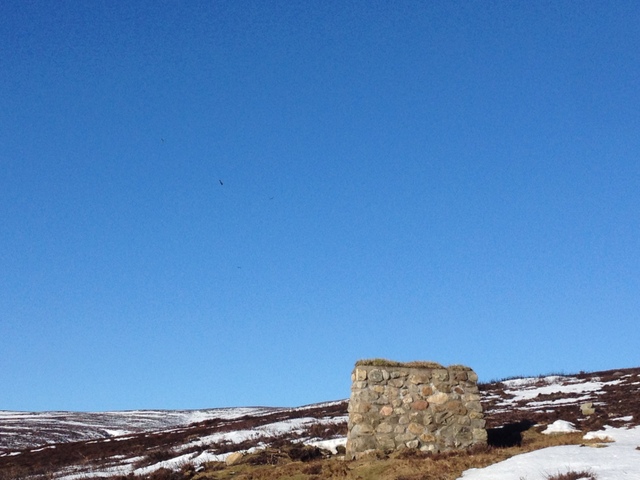 Half a dozen Buzzards above the Grouse Butt 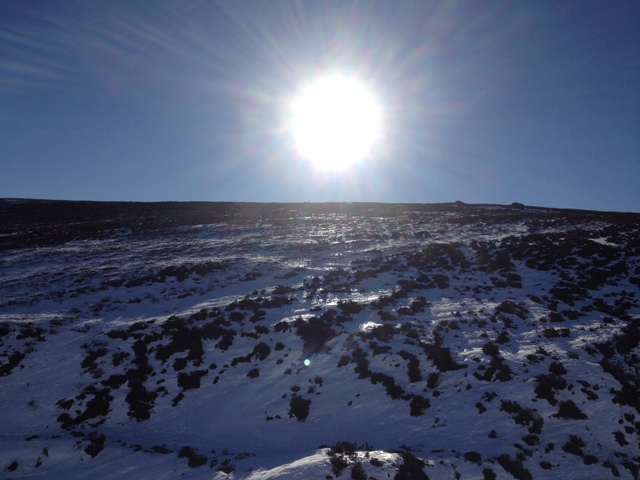 The track can be taken round to the right of this wee hill too but it looked bogged down with snow so I took the track up over the top. The only problem was that I had to descend back down slightly to cross the White Burn beside Millstone Crag. The snow had gathered in this hollow and was hard work to get up as we made the ascent up to meet the track again where the snow was not covering it. 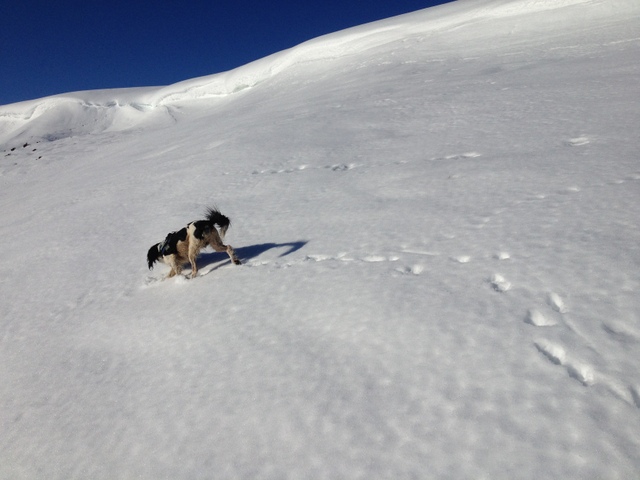 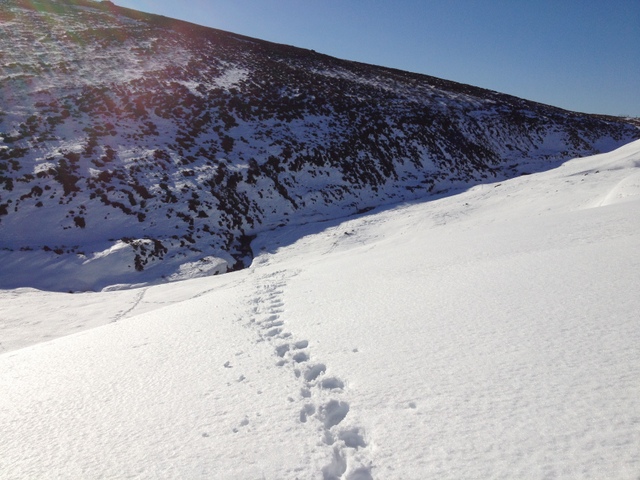 Tough going in deep snow, did not last long though 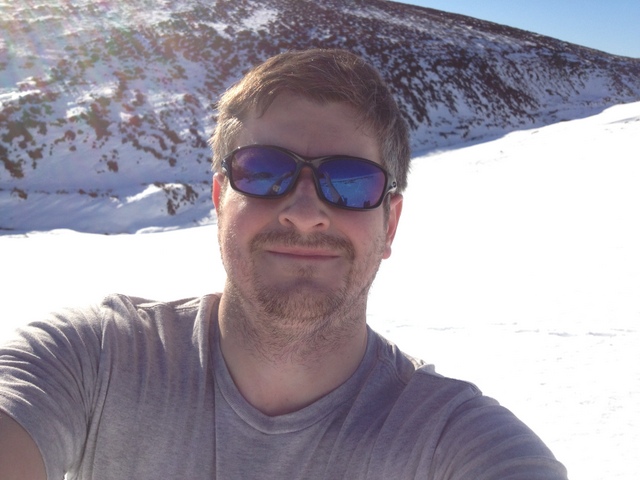 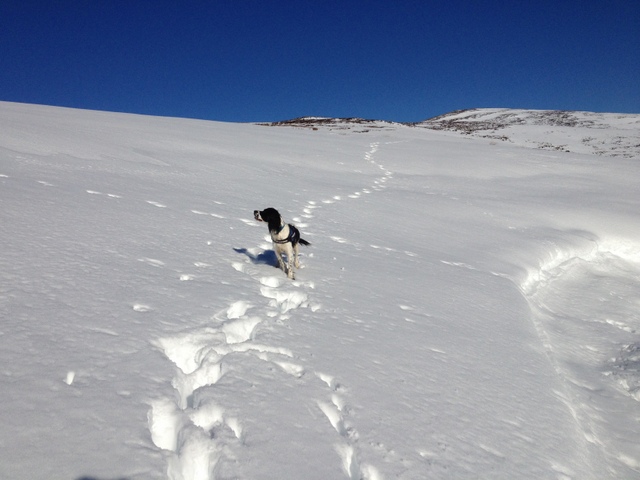 The snow disappeared from the track around Black Craig and we re-joined up to Wester Cairn. On top here the views were stunning but the lightweight top had to be donned as the wind was fierce. Up until then I had been in a t-shirt! We followed the grassy ATV track east parallel to the fence up to the summit dome of Mount Battock. 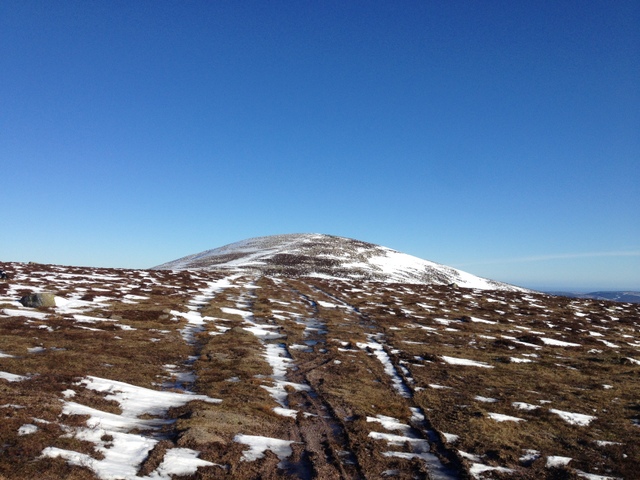 We reached the summit trig and took refuge from the wind in the summit shelter where the dogs got a hot dog sausage and a carrot and I got a hot brew and flap jack. I smarted at my luck with the weather which granted the stunning 360deg views and clear blue skies. Summit selfie, thin top on with hood and woolly hat due to wind Our return route was to be over the Hill of Saughs, I picked the dogs up and launched them over the fence and while I made my way to the style they had both jumped back over!! Sods. Back to the summit from other side of the fence Looking to track on the way down to Glen Esk

The route off towards the Hill of Saughs was really icy and I followed the deeper softer snow as I always find this easier when going downhill, also I did not want to have to wear the micro spikes. Over to my left the other side of the fence I could see a Mountain Hare, Lochy jumped up and rested his front paws onto the fence so head could get a better view of the magnificent animal. Once at the bottom before the rise to Hill of Saughs you cross back over the fence again and then through some terrain which in summer may be a bog fest. We passed through a gate and back onto a track and followed this all the way over the Hill of Turret. After this we descended to the right over some rough heather as I was a bit sick of the track, we headed to the crossing of the burn of Turret where we met the track again from our outward route. The track was really getting muddy and squelchy now with it being 2pm and the warmest time of the day. We retraced our steps all the way back passed the barking working dogs and through the farm. I sent the dogs into the Burn of Laurie to wash the mud off them from the tracks and they enjoyed their wee swim. Back at the car park at the Phone box

Back at the car in 4 hours 35 mins, while driving out Glen Esk I looked at the temp and it read 10 Degrees, it felt like there were signs of Spring and Bruce Springsteen ‘Dancing it the Dark’ came on the radio, windows down wow what a day. I’d say it was not the most exciting hill but when you add all the components together (weather, close proximity to home, seeing the dogs having so much fun, great views all day, feeling fitter, easier tracks aiding navigation) it made for a great day out. I feel winter will bite back but hopefully not too harshly as I look forward to the long days on the hill this Spring/Summer. The photo of your dog peeking over the cairn is my highlight, very cute

I have only been out in that area once to walk Clachnaben, it is a lovely area but I was almost blown off the top.

A good day a'bhalaich , aye Spring is in the air ....just

Sarah86 wrote:The photo of your dog peeking over the cairn is my highlight, very cute

I have only been out in that area once to walk Clachnaben, it is a lovely area but I was almost blown off the top.

It was quite windy on Mount Battock too, it really is a lovely walk Sarah. I just noticed my other dog is in the pic too, just peeping out the side between the cairn and trig point

An Cu would have loved the amount of Grouse Colla, he'd have had a field day!!

Probably a better route for Mount Battock than mine (from Clachnaben) as you don't see the mess they have made of the hill top between the two hills.

Another stunning day out for you Matthew and you're right about the feeling of spring, we were out in the lakes on Saturday, it was warm on the tops not a breath of wind and the views were extensive, like you, we're looking forward to spring and summer, not long now.

How lucky you were with the weather!

Lovely pictures of the dogs having fun.

Another great day with braw pics

Huff_n_Puff wrote:Missed this the first time round - now looking at the possibility of doing Mount Battock on a trip down to Dundee so thanks for showing it off so well

Nice easy day out, I'd recommend going outwith nesting season with the dogs as mine were all over the moor scenting grouse, they must have put up well over 50 throughout the day

Great report! Have to ask, as according to the WH route description there is an electric fence to cross, is there a way to get dogs across without having to lift them? I have no chance of being able to lift my two over a fence.

I think you buzzard in the photo may actually be a red kite too, bit hard to say as it isn't clear but the wing shape, underwing colours and a more reddish looking colour all make me think it is more likely to be a kite than a buzzard

KatTai wrote:Great report! Have to ask, as according to the WH route description there is an electric fence to cross, is there a way to get dogs across without having to lift them? I have no chance of being able to lift my two over a fence.

I think you buzzard in the photo may actually be a red kite too, bit hard to say as it isn't clear but the wing shape, underwing colours and a more reddish looking colour all make me think it is more likely to be a kite than a buzzard

I don't think the fence was electric tbh, you could just go down the other side of it till it ends, I.e. The Clachnaben side.....I thought I had read it was electric too but neither of mine got zapped off it

Cheers re the birds

Beaner001 wrote:
I don't think the fence was electric tbh, you could just go down the other side of it till it ends, I.e. The Clachnaben side.....I thought I had read it was electric too but neither of mine got zapped off it

Cheers re the birds

Thank you that saves a bit of wondering about the fence! If it isn't electric then they can usually find some way through themselves.