Aonach Eagach in the background

Great Day out with Andy Laughland and Kevin McBride. Parked up at the car park in Glen Nevis, the weather was just above freezing, and cloud base covered the summits. We set off at 09:28 up the normal route as describes, the going was okay although the soft snow was tricky in areas. We had a large group of 6 persons about a kilometre behind us, and they drifted further back as the day progressed. The steeper sections were okay , once up on the ridge to the summit the conditions improved with blue skies appearing. The ridge was heavy with cornice and care had to be taken. Andy & Kev on the final ascent to Stob Ban

We had a spot of lunch and donned ice axe and crampons, then tackled the final ascent of Stob Ban. Once at the summit around 1pm, the views were spectacular, and visibility was crystal clear. we did not stop for long and head off to bag Mullach Nan Coirean, en route we caught 2 other pairs of walkers, who were also enjoying this fantastic day. 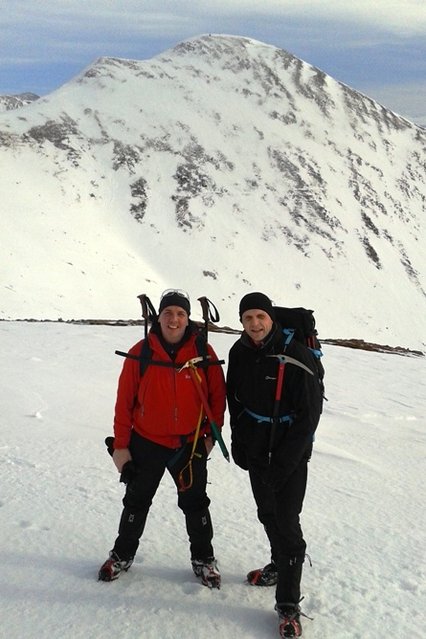 Shaun & Andy with Stob Ban summit in the background

The walk to Mullach Nan Coirean was deceptive as, it appeared closer than it actually was. We eventually arrived around 2pm and had another bite to eat, then descended down the ridge to the forest. The forest walk is relatively new, as the old path is forbidden and blocked off. The route through the forest was great, as the forestry commission have done a great job establishing a good path through. We arrive back at the car park at 16:19, and then headed back to Fort Bill. We had a table booked that night at the Ben Nevis Inn in Glen Nevis (check out my review on Trip Advisor of that exceptional bunkhouse and restaurant). Today took me to 99 Munros, on the Sunday we are heading to Loch Treig at Fersit to complete Stob Coire Sgriodain & Chno Dearg to complete 101 Munros Aonach Eagach in the distance

That looked an enjoyable day