Propelled by my injury clearing up, and the thirst for getting back into the old lifestyle of wandering the hills/mountains, has seen the start of 2015 laden with a bounty of glorious sunny winter walks. Today's little expedition would be no different

Munro compleatist, sooper dooper physio and rampant Corbett bagger Mountain Thyme (Theresa) contacted me midweek asking if I was up for walking Monday. "Do you fancy a Munro MT" ? "I only do Corbetts now" she sternly told me! "I'll help you bag a Corbett no problem", I'll walk any hills you see.

The weather gods predicted East was the place to be. A quick look at MT's Corbettt map provided guidance on our hill of choice - Ben Tirran it would be. Situated in Glen Cova Ben Tirran is 12k East of Munros Mayar & Driesh, sitting West of Tirran is Loch Wharral and the magnificent Loch Brandy which are both flanked by imposing Corries.

Picked up at 7am, arriving at Glen Cova 3 hours later. Been years since I'd been here doing M & D. I remember meeting another WH member, now also a Munro compleatist - Graham Slater, nice fella. Was looking forward to exploring the area. Just went with the trail runners for this walk due to the melting snow.

Walk past the hotel and head straight up North

A short pull up to the plateau is next, on arrival Loch Brandy looks stunning. 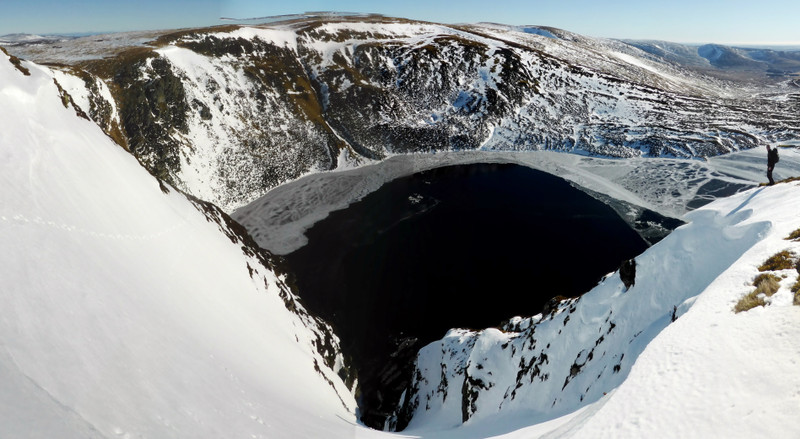 We decided to drop into the Ford at the Northern tip of Loch Brandy and just gazed in amazement at the view in front of us. The Loch itself was a mixture of dystopian greys with sections of ice surrounding its parameters. The sun was sitting high in the clear blue sky, its reflection beaming into the loch creating warmth, light and a touch of dazzlement! If I had a spacehopper I would bounce on down there, on the ice parts off course, and have me some fun 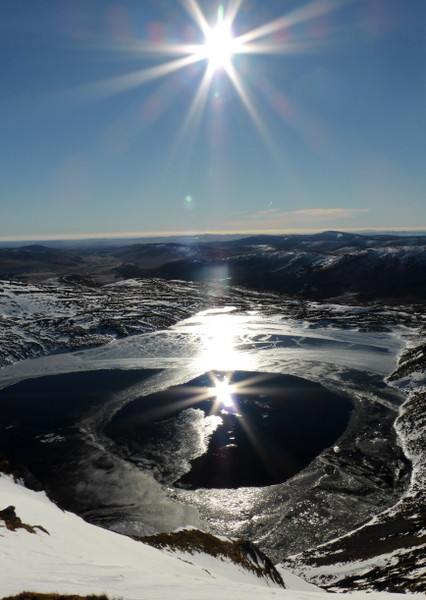 We sat here for a bite to eat whilst soaking up the hot rays and taking in the splendour in front of us. Felt really lucky to be out in such glorious conditions, with equally glorious views. Was now time for some action shots! 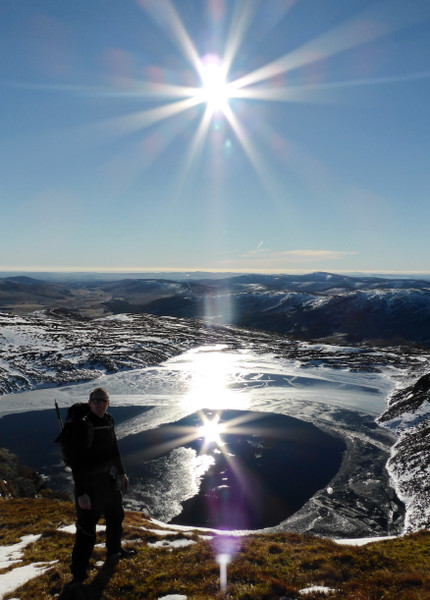 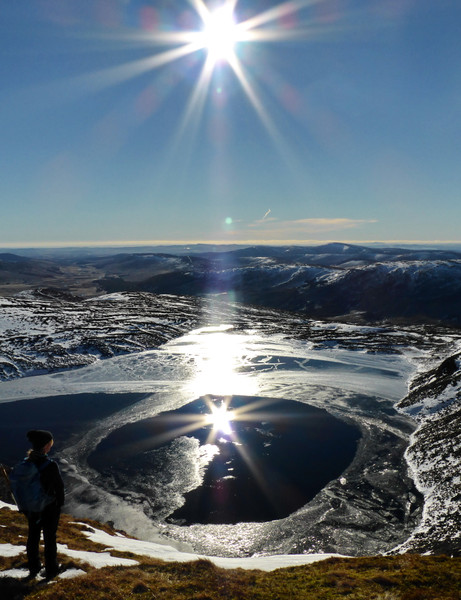 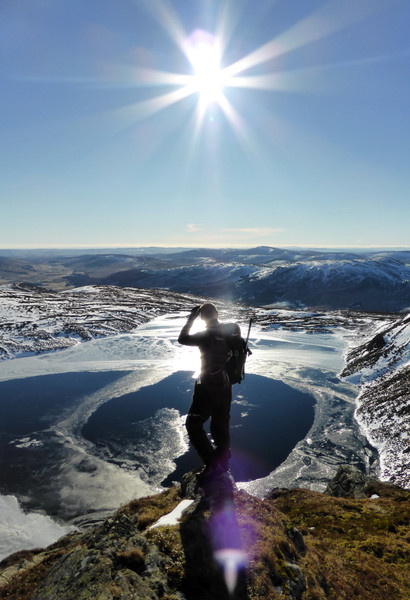 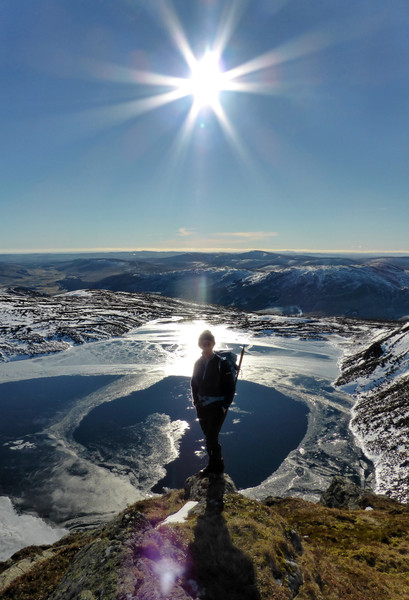 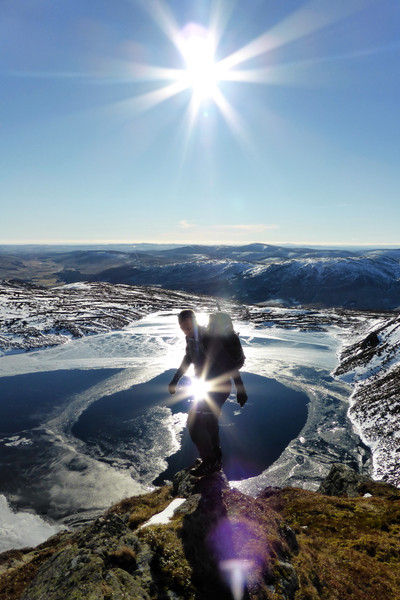 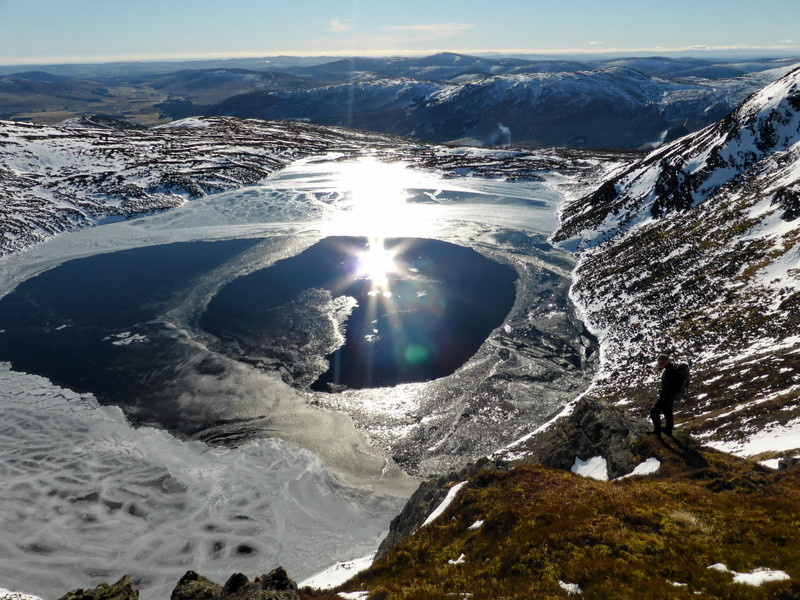 Could've sat here all day long but MT had a Corbett to bag! Made our way to Green Hill then followed the fence East for 4Km to Goet hill, from here it was 1KM SW to Tirran. This part of the walk was very pleasurable, the views NW to Lochnagar standing out. 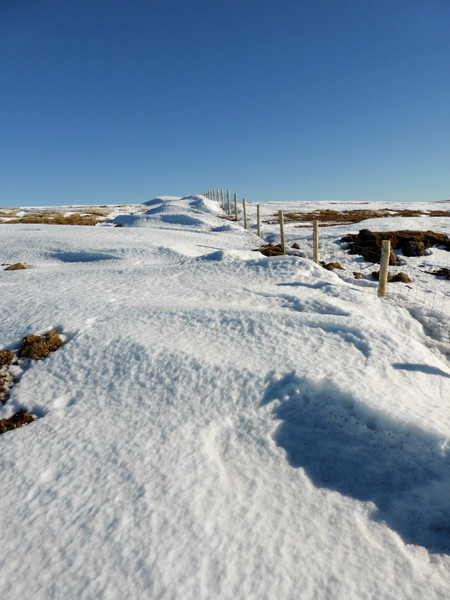 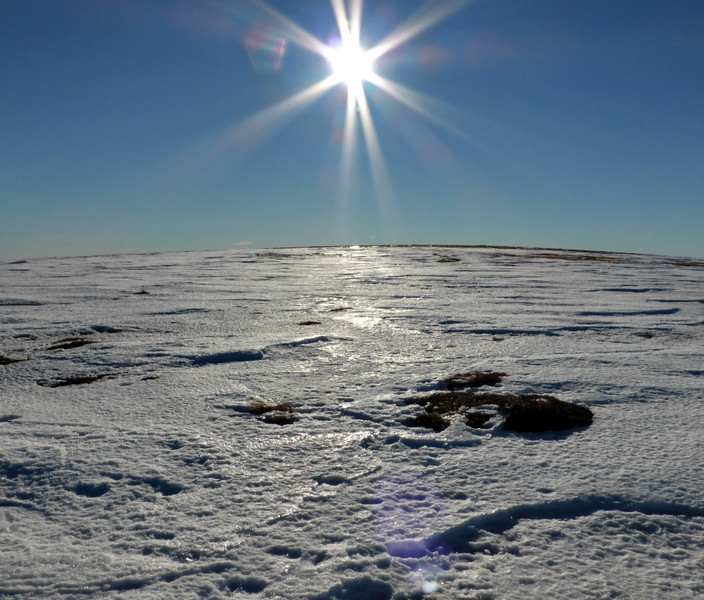 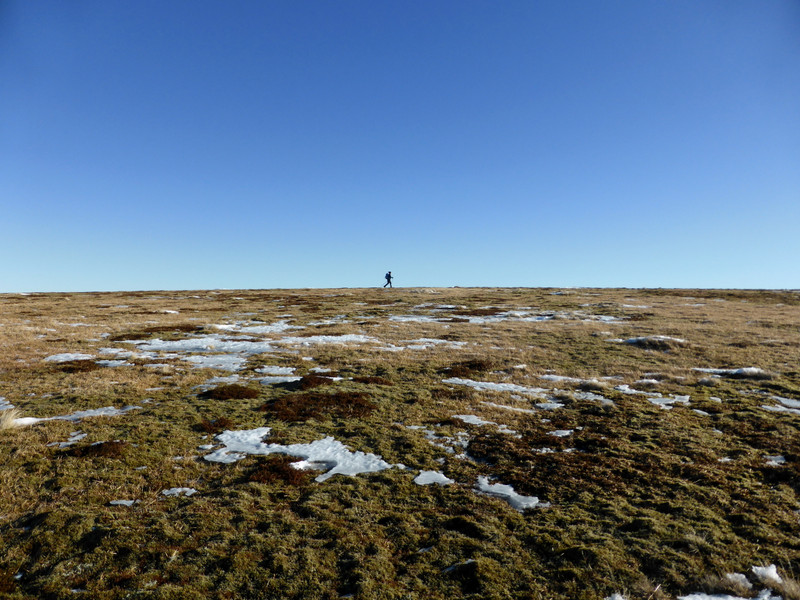 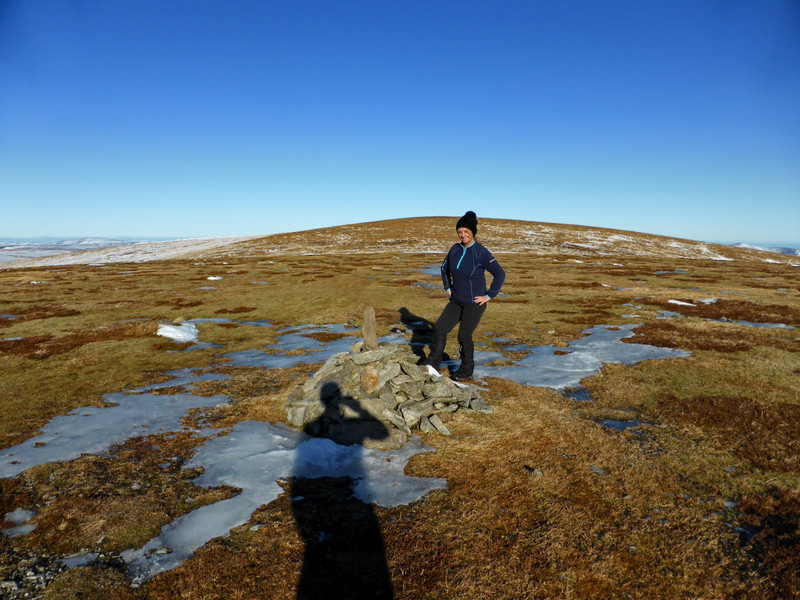 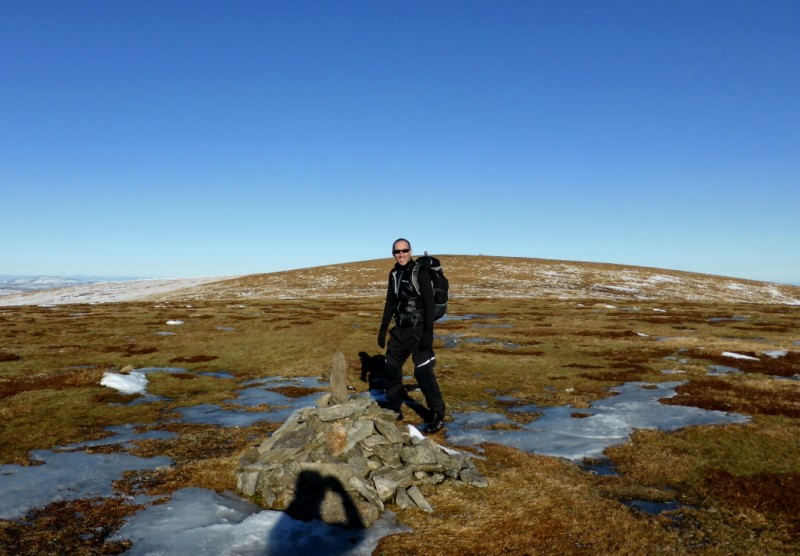 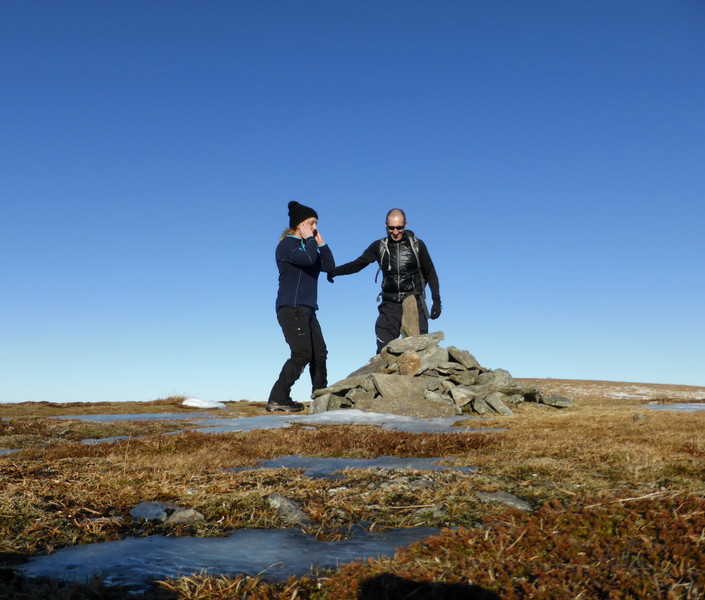 From Ben Tirran we headed SW for 4k which took us back to the start. This was mainly pathless, and wet in some areas. On route back we stopped at Loch Wharral. 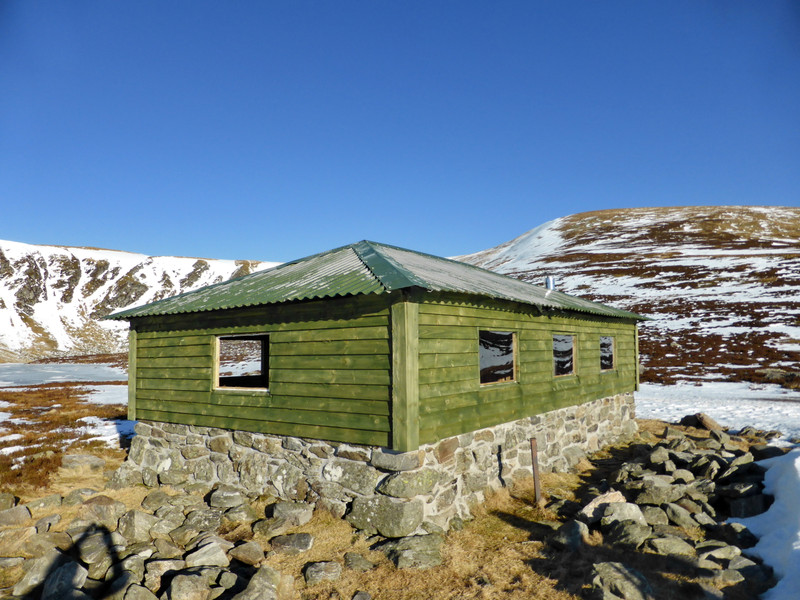 I was going to comment and describe this as a dooter snow angel but was advised any credibility I had would be shot to pieces. So, went for the "dooter snow warrior" instead 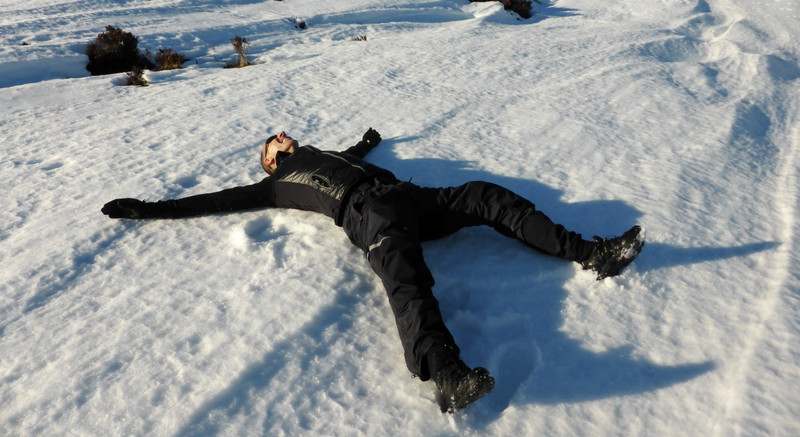 5 hours after leaving we arrived back at the car. My trail runners were soaked so I'd be walking up the stairs to my flat in the 4 season boots! Thankfully my feet were dry as I'd wore the waterproof socks

Thanks to Theresa for driving and being great company in the hills. I'm sure she'll complete these Corbetts soon, now she's her "mojo" back.

For me next, someone has offered to take me nightime walking...should be interesting

Another amazing winters day out on the hills

Those photos of Loch Brandy and that sharp sun are just amazing, this is on my to do list this year so thanks for posting

The mystery solved, the new track (scar) up Ben Tirran was built for this new hut ! Not been up there for a while now but had noticed this new track. Wonderful photographs of Loch Brandy, lucky you getting a day like that, superb

The route you took makes a wonderful winter walk, especially when you finish at the Hotel

Nice wee hill that, wish we had the same weather though

Good to see you back out and about

Grand pics and good to see you recovering from injury

It's a great little circuit.

I did this route the day before you, with similarly stunning weather and views

Loch Brandy looked great too, but I was caught unawares by how grand Loch Wharral and its corrie looked when I got there

Cheers everyone - was a grand day

Pete - had seen your photos before leaving so cheers.

rockhopper wrote:Nice to be able to get out on a Monday esp to make the best of days like this - good to see you getting out more regularly even if MT does have to support you

Someone has to help the aged

Dazzling pictures of the lochan but also really like the third one.

It was years ago I was up there and there was none of the white stuff around. Have to admit the combination of snow and sun notches up the photogenic factor and for somewhere in the Angus glens this looks quite spectacular!