I've been waiting for a reasonably favourable forecast to justify the 16 hours plus travel time to and from the Highlands. In the meantime I took a wander around some favourite hills in Snowdonia, mainly to get some walking and winter scrambling practice wearing crampons, to which I'm pretty new.

No real report: this is a very very well reported route, so nothing to add. I thought the pics might be useful to anyone wondering what conditions were like in Snowdonia.

- so maybe a bit out of date now as regards conditions! 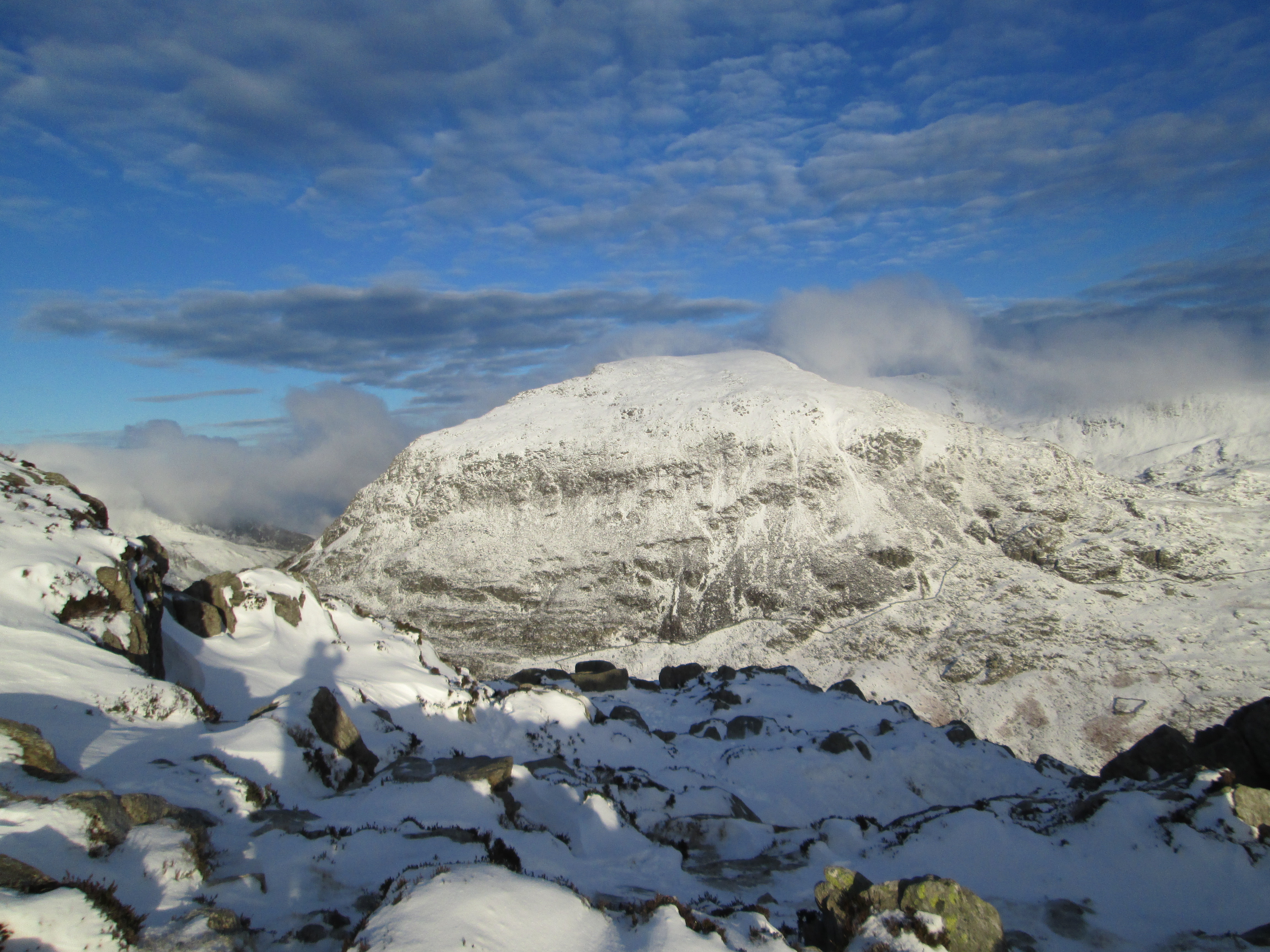 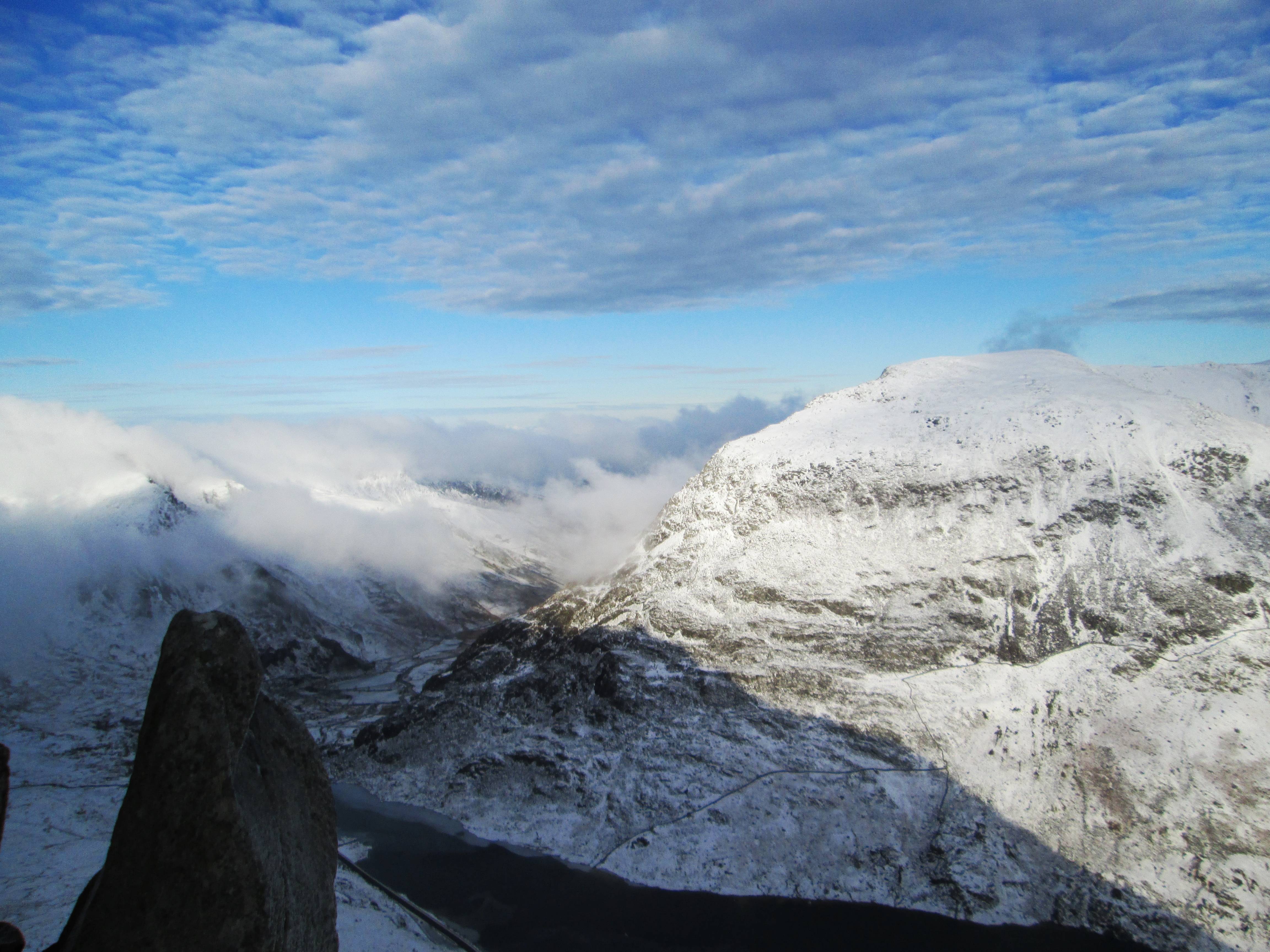 IMG_0868 Looking more or less North from about 2/3 of the way up Tryfan, Pen-Yr-Ole-Wen to the right, and Nant Ffrancon valley to the left. 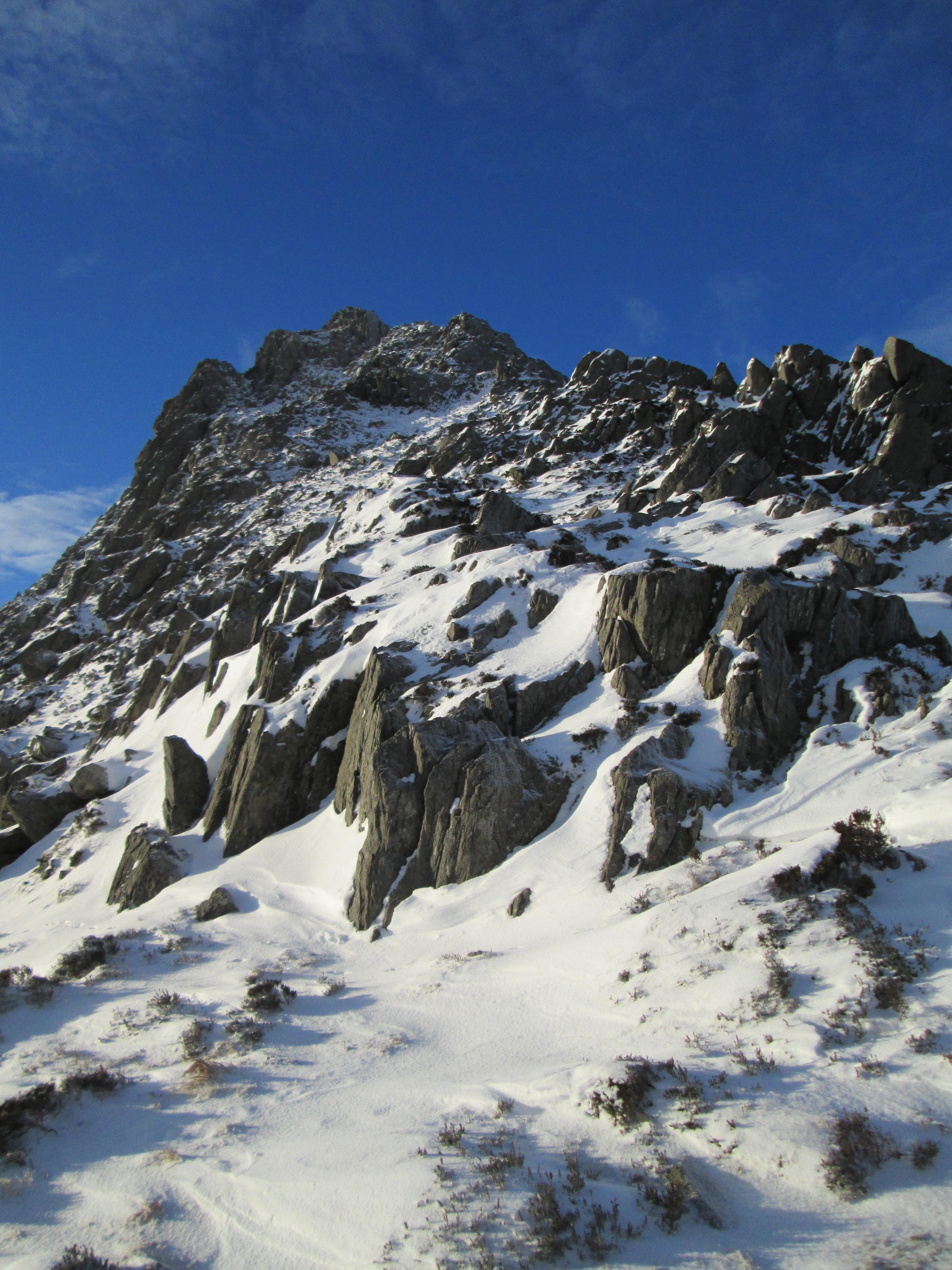 IMG_0865. The start of Tryfan scramble - much inviting rock!

Spend a couple of hours playing around on the scrambles on Tryfan North face, getting used to scrambling/climbing with crampons. It is very interesting to discover the extent to which, with crampons, one can exploit very tiny ledges and indents in the rock that one wouldn't dream of relying on with just walking shoes (albeit it takes a while to ensure the placement is good). On the other hand it takes ages to clear the snow from hand holds and ensure that they're sound, and "grippable" with gloves. Overall it seems to take much longer to scramble/climb in snow conditions, but it's a lot of fun!

Notwithstanding the temperature is around freezing and I'm quite lightly clad, I'm sweating cobs by the time I reach the summit. 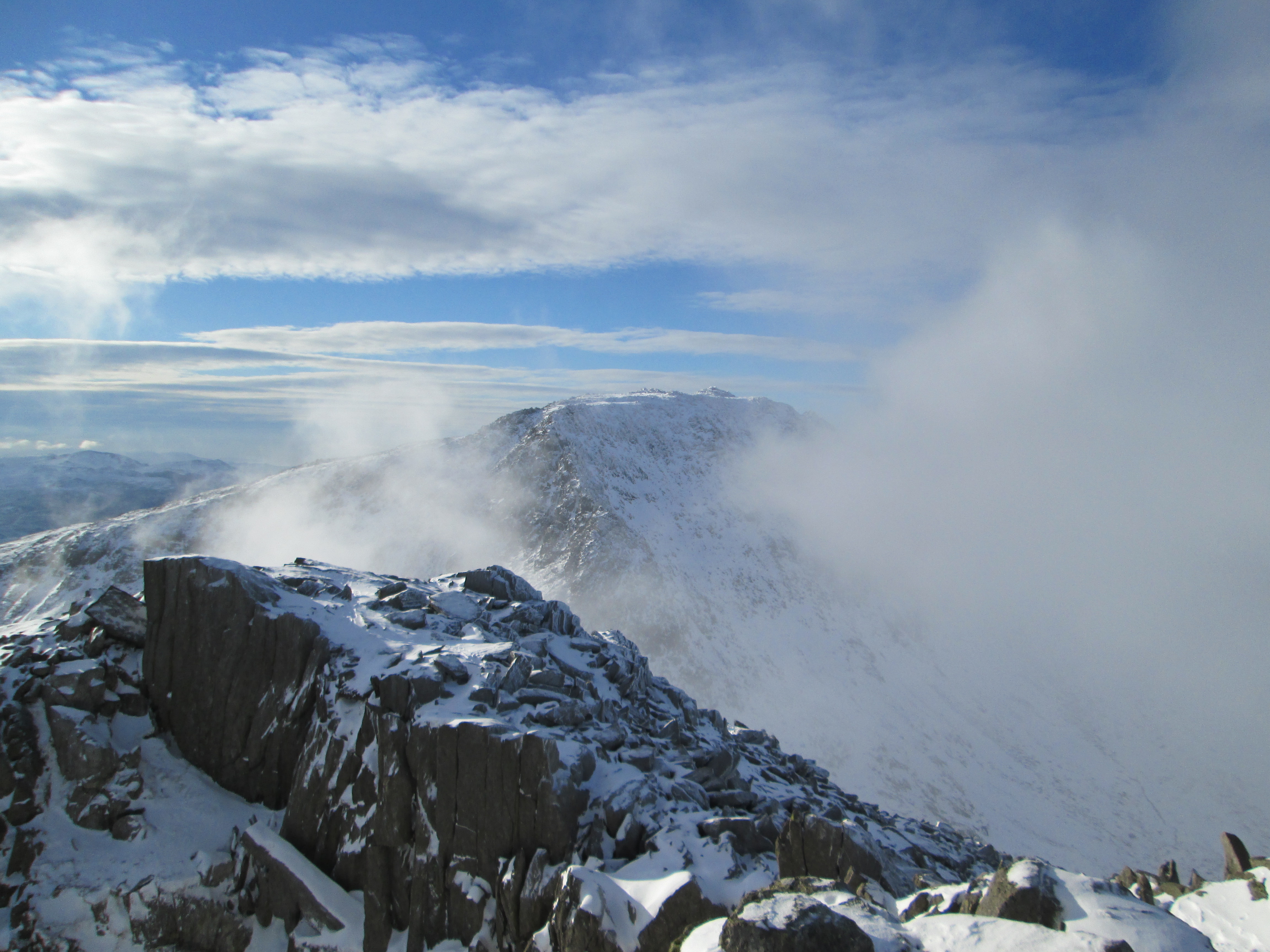 IMG_0871. Looking towards the Glyders and Bristly Ridge from the top of Tryfan. Alternating sun and cloud - but mainly sun. 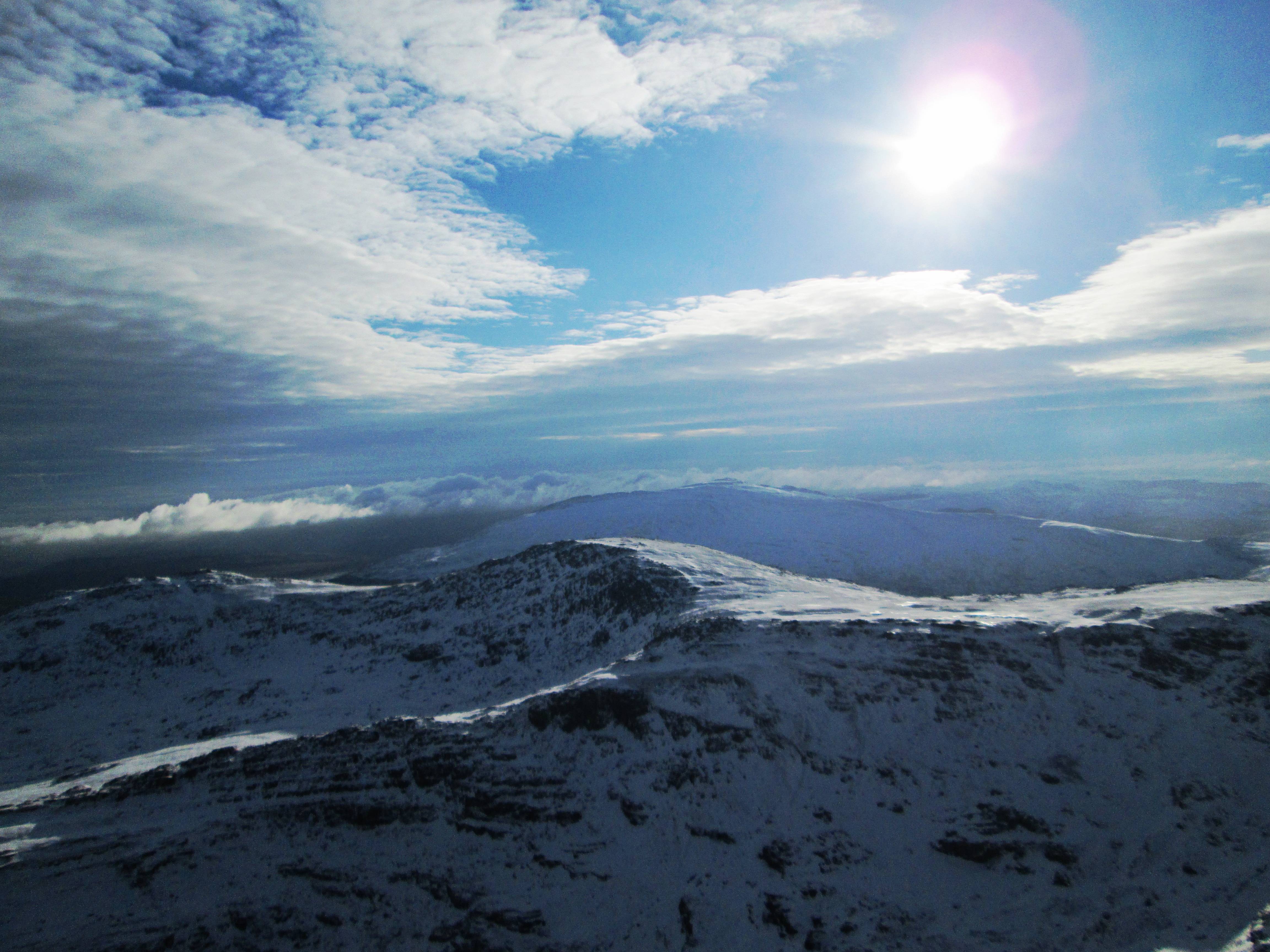 Descending Tryfan takes an age because the snow covers all the holes in the boulder fields, so a fair bit of care is called for. 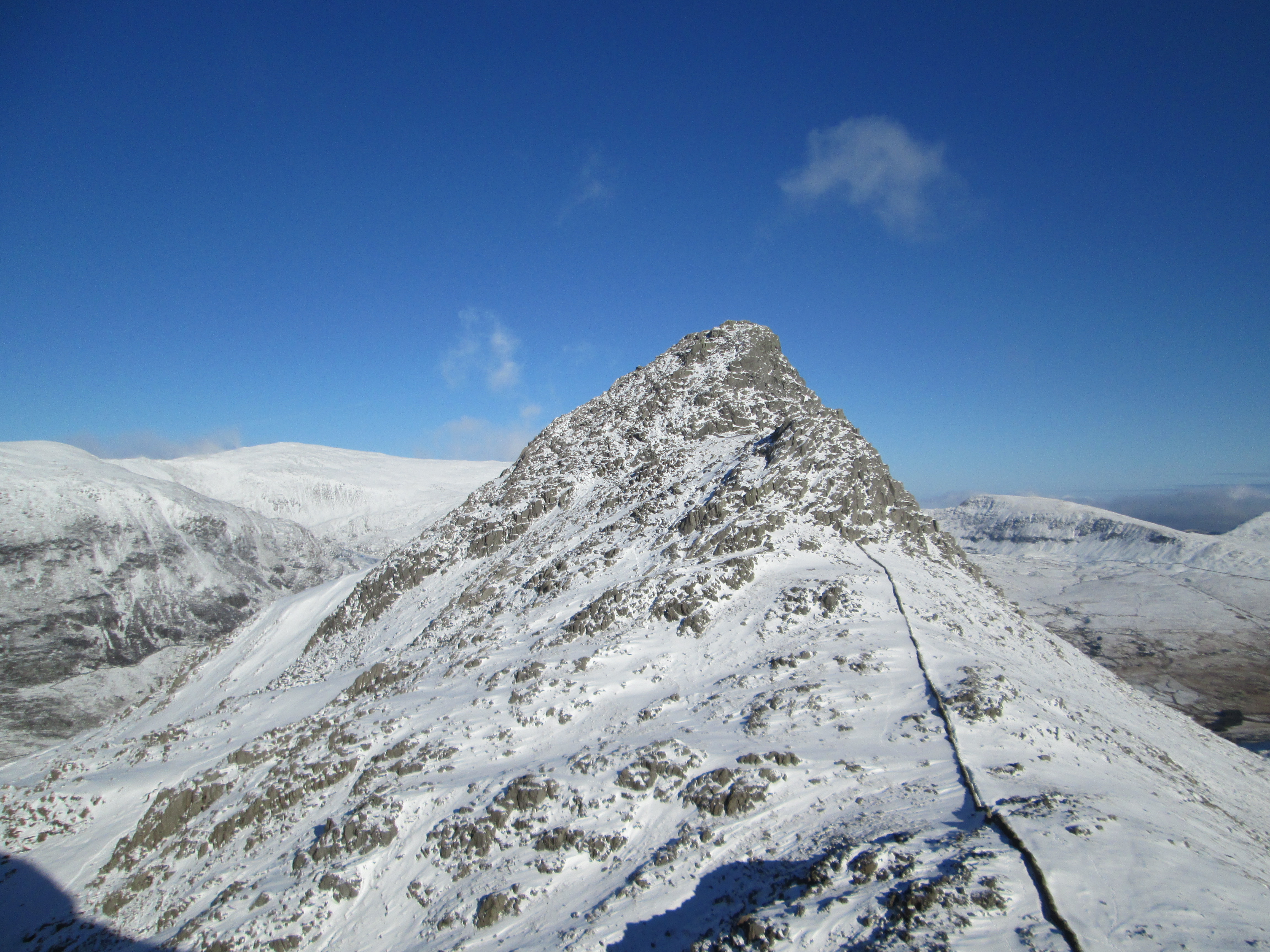 IMG_0873. Looking back at Tryfan from the start of Bristly Ridge. Beautiful! 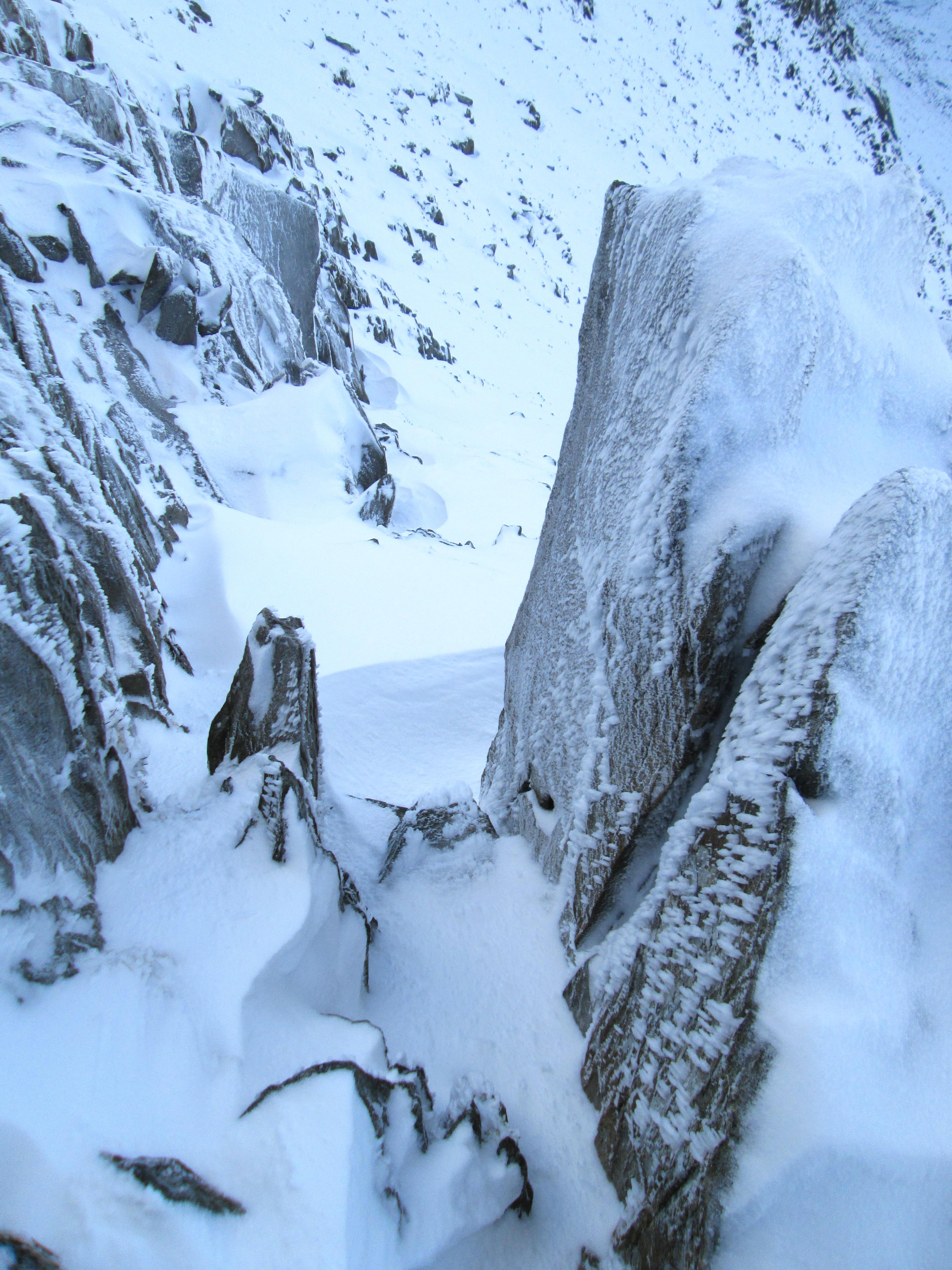 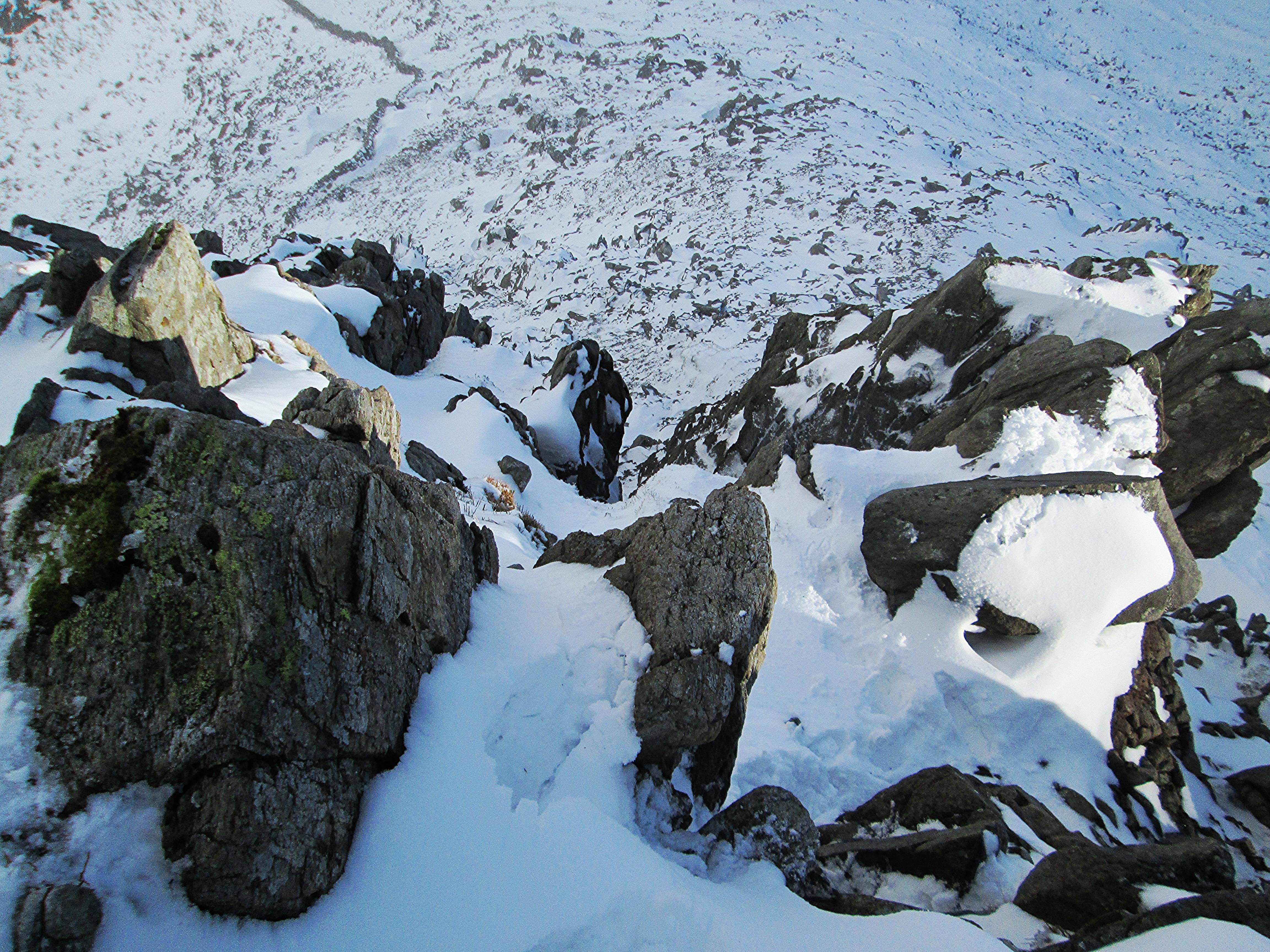 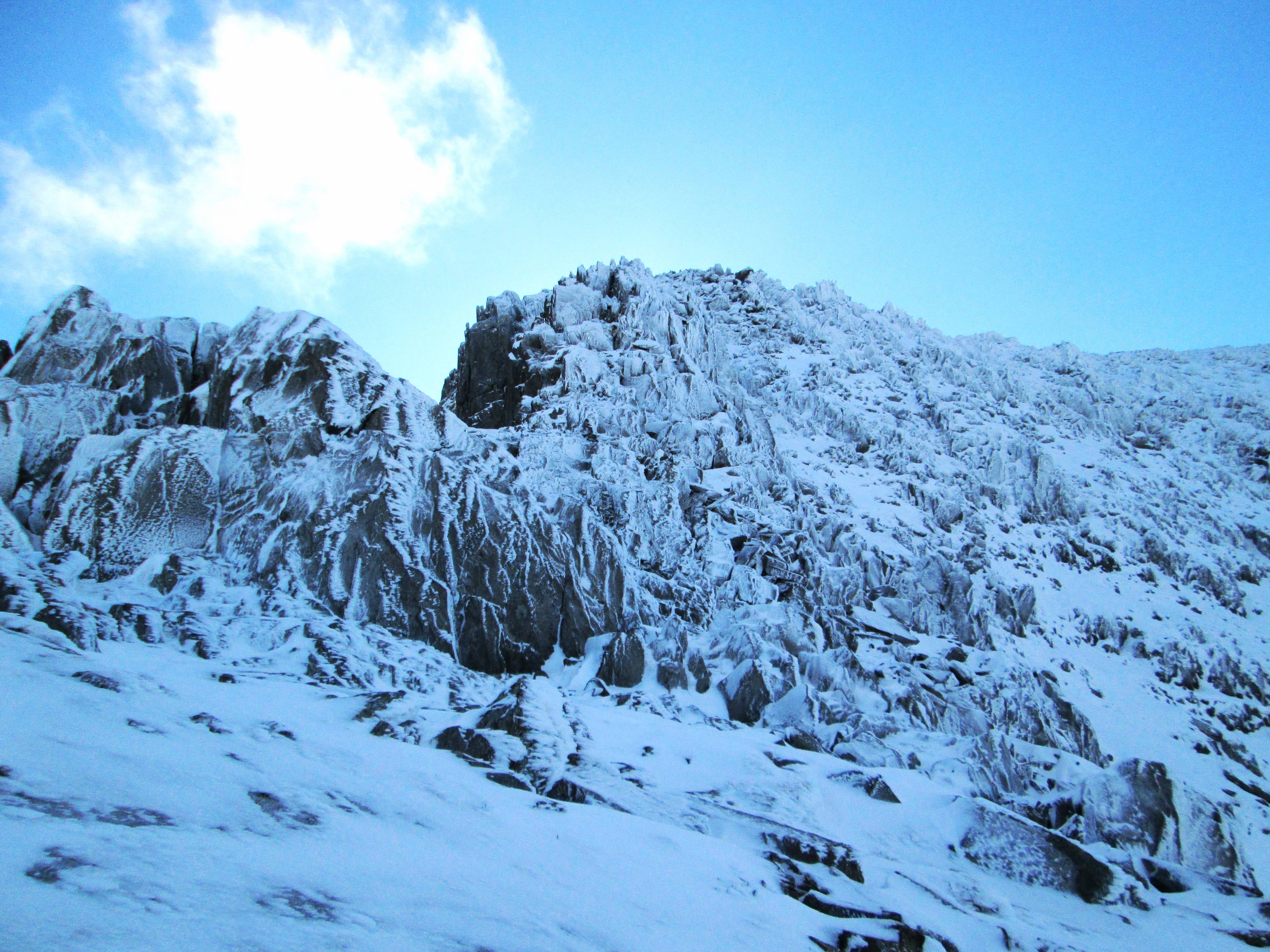 IMG_0876. Wild snow and ice patterns on the rock towards the top of Bristly Ridge. 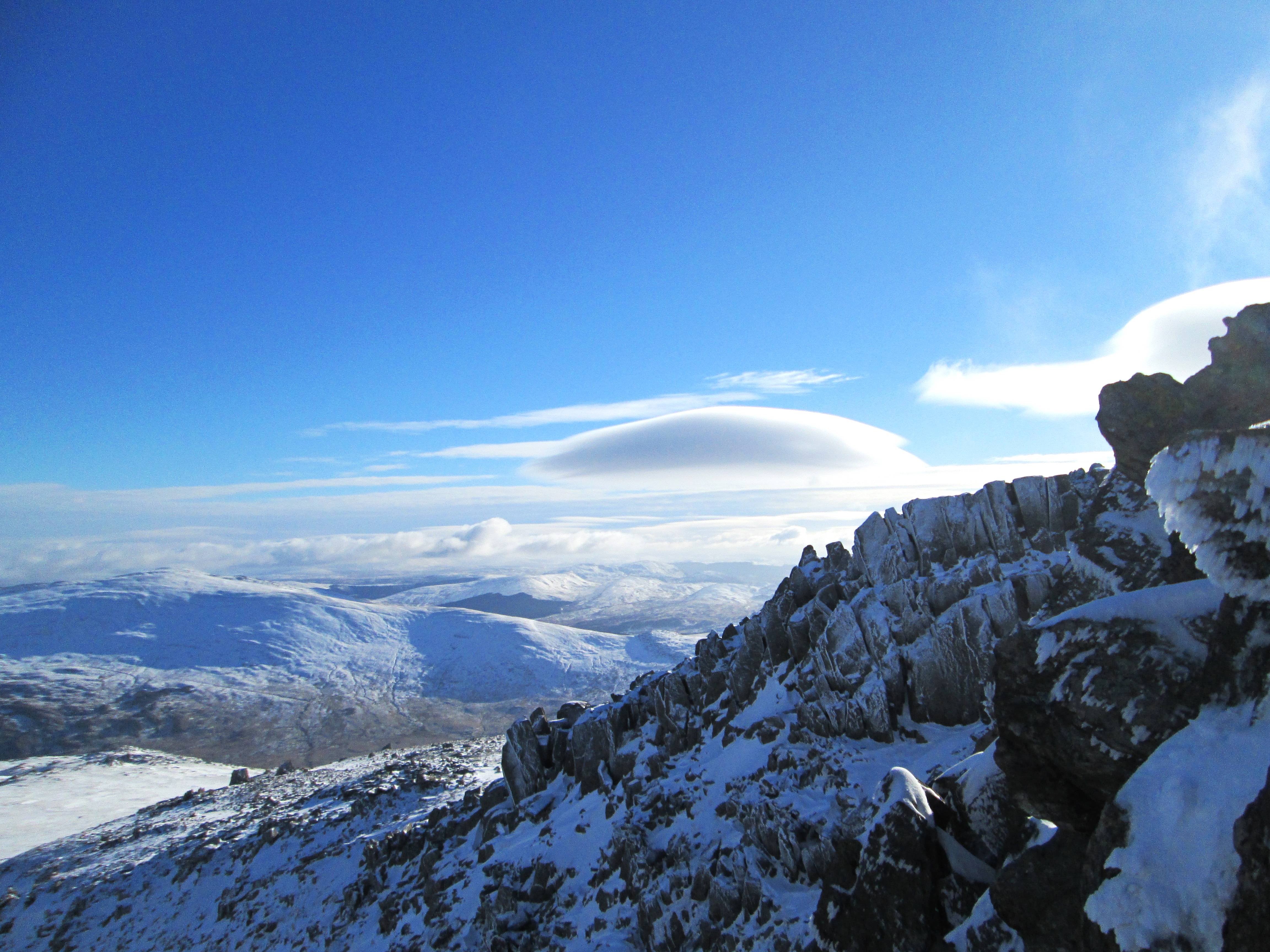 Alternating sun and cloud across the Glyders. I'm caught up by a young lad - about 20-ish - who's caught a 5.00am train from Widnes to Bangor, and then cycled up to Ogwen. He's apparently never done winter walking before, and has just bought all his gear (but no crampons or ice axe) to get started. He's relying on his smart phone for navigation.

I'm well impressed with his enterprise. Who says the yoof of today only want to party???

I tell him he's got a lot to look forward to, including the Welsh 3000ers if he's feeling fit; and he expresses a lot of interest in having a go. We discuss the logistics of doing it solo (it's a long way by road from Pen-y-Pass to Aber Falls - the taxi fare cost me £70 the last time I did it!!!).

We have to do a bit of careful navigating in the mist coming off Glyder Fawr, and I'm glad I have compass and map (I've gone astray here before through being over-confident). I recommend that he gets a map and compass as backup for future expeditions, telling him about some of the times I've got lost in spite of having them and knowing the ground I was on very well.

We part at Llyn y Cwn - he wants to be sure he catches his train back, and also he's a bit nervous about the possibility of there not being much of a path down from Y Garn, whereas the route down into Devil's Kitchen will be straightforward.

Y Garn is completely clag-bound as I head off towards it.

As it turns out, he's right: I can't find the path off Y Garn, so I just strike off down the side of the shoulder above Llyn Clyd, more or less where the path should be.

After a while I drop out of the cloud, and then the cloud start to lift quite rapidly. 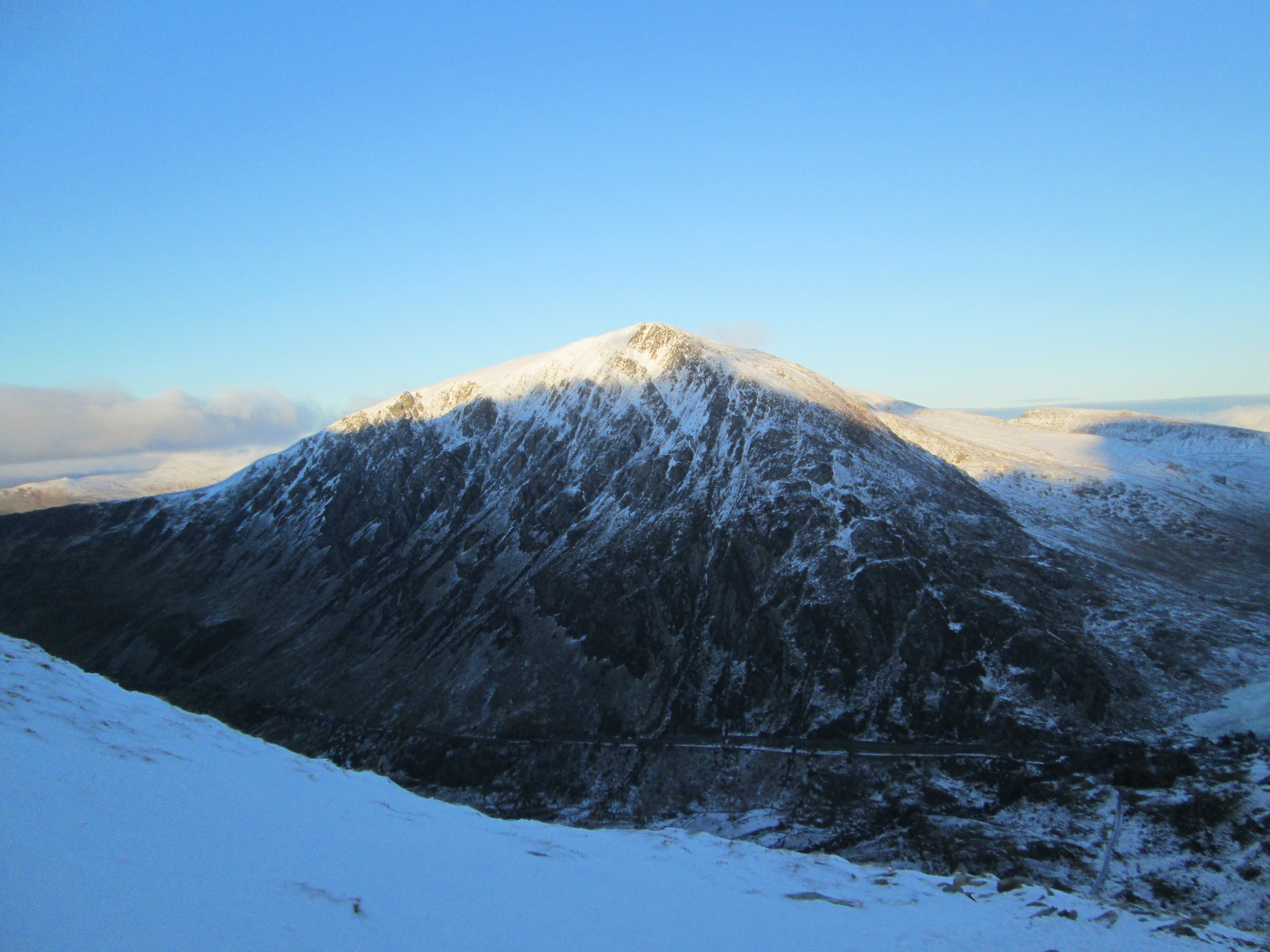 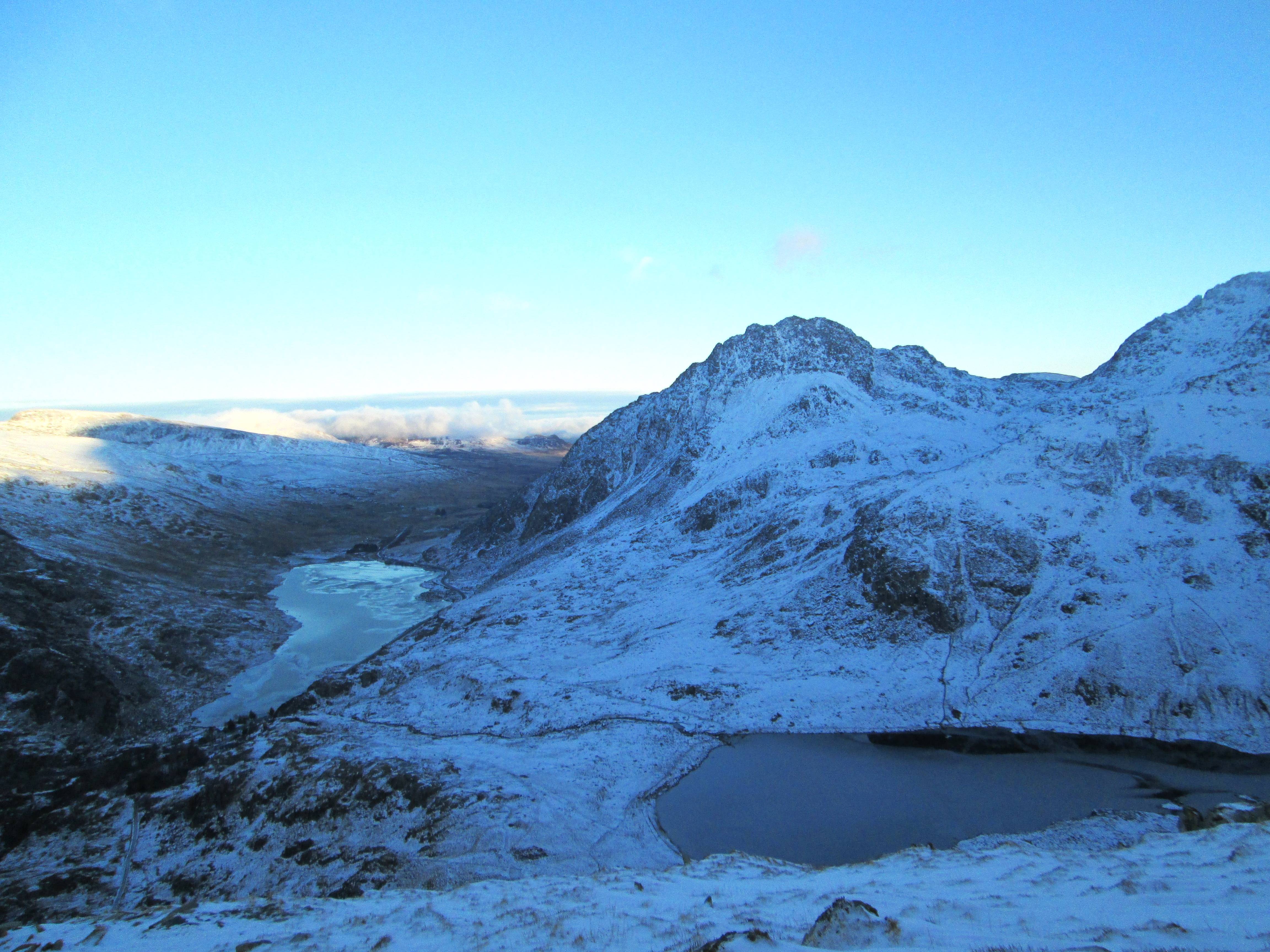 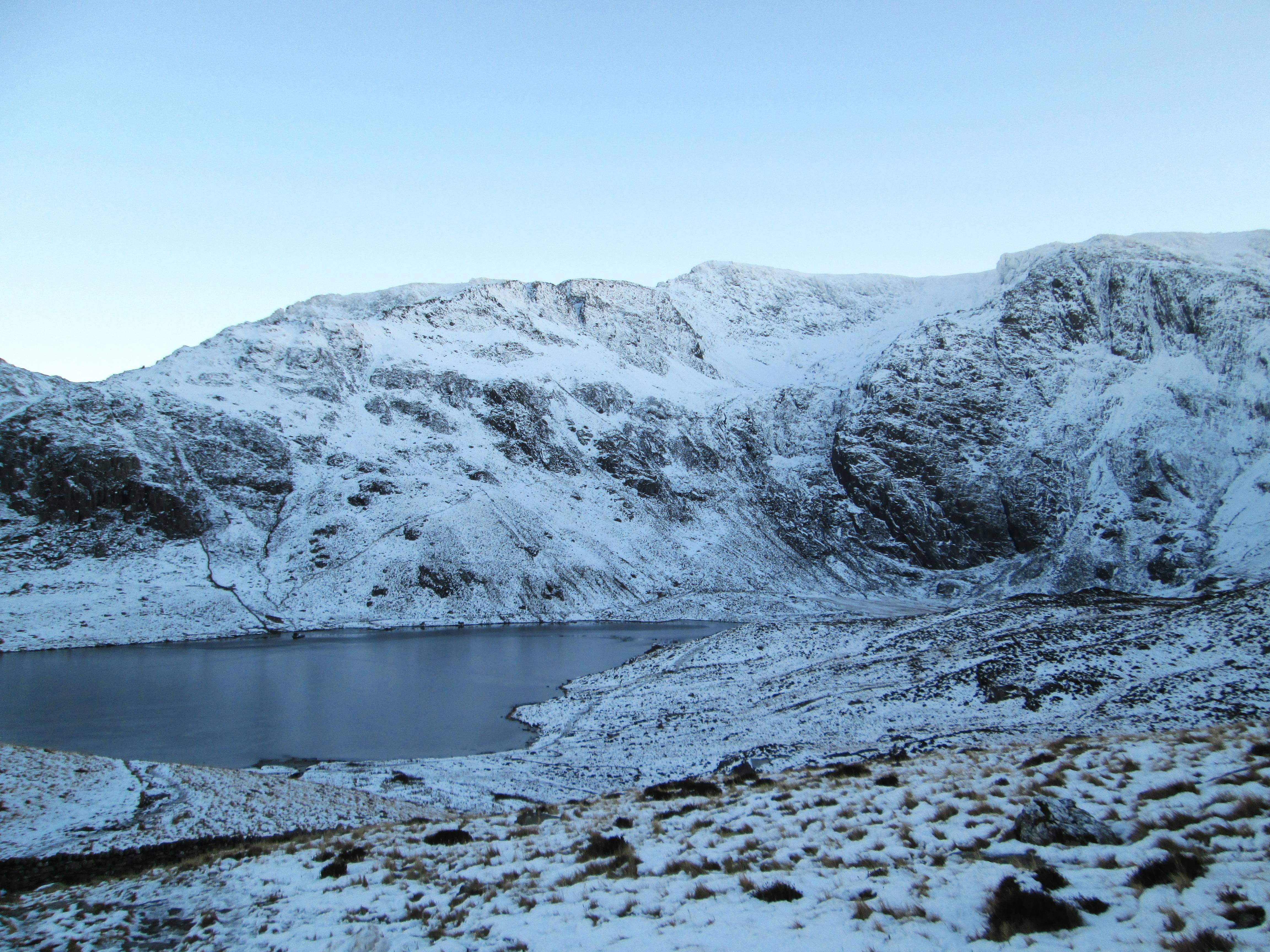 IMG_0883. Almost at Llyn Idwal level. Still quite a bit of snow. Glyders clear of cloud, and the Idwal Slabs look magnificent. 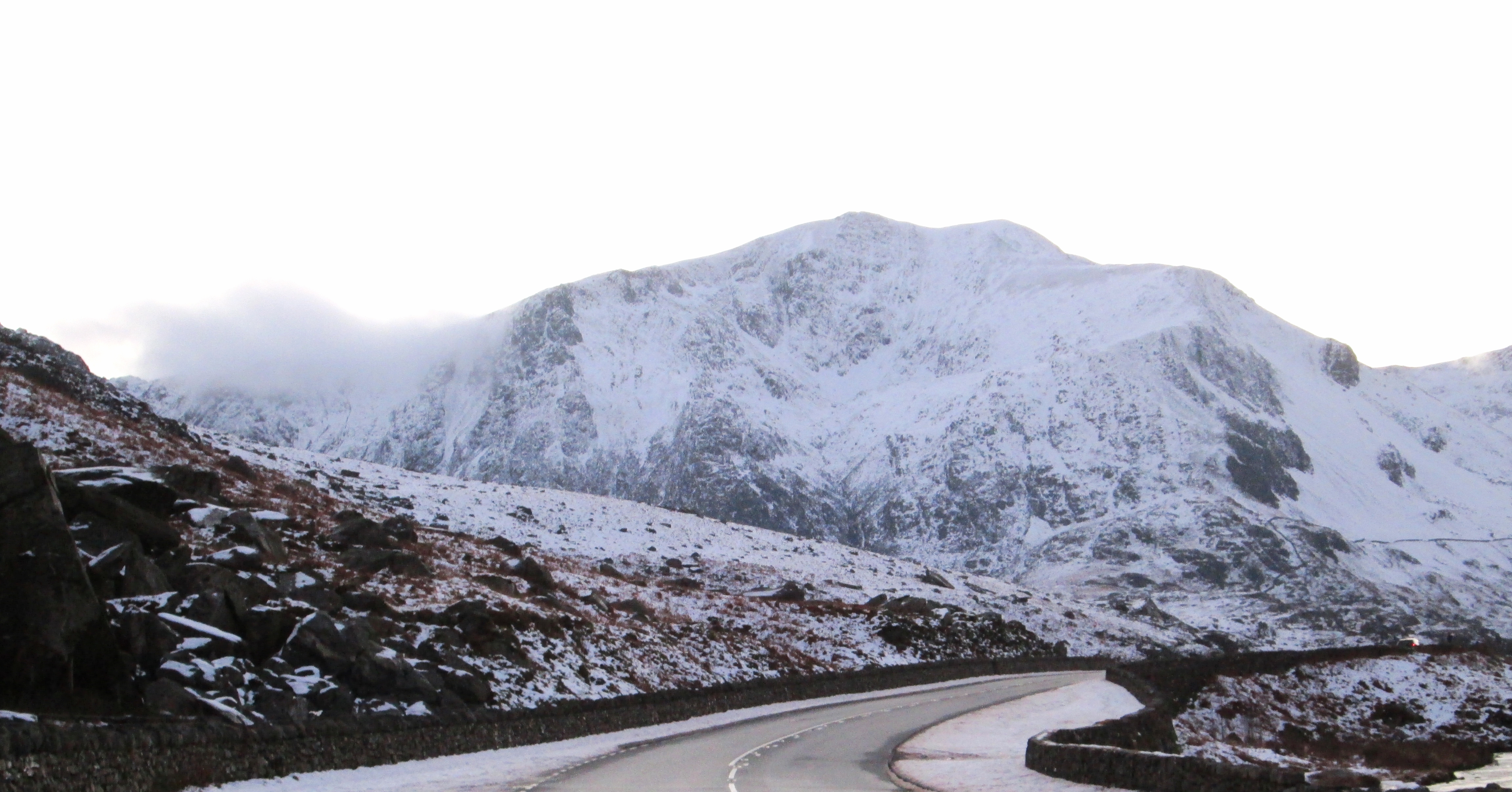 And finally, to round off the day, a quick stop-off at a building of cultural, architectural and historical interest, to imbibe a bit of culture.