On the drive up the A82 most hills looked bare so I was hoping Bidean would hold some snow. First time I've been up this path, it's not shown on the OS maps but I used Bing maps to view an arial photo and draw a gpx route.

View from the car park, from here it's back to the A82, across the road bridge and through a gate. The path is good, couple of wet scrambly bits though. 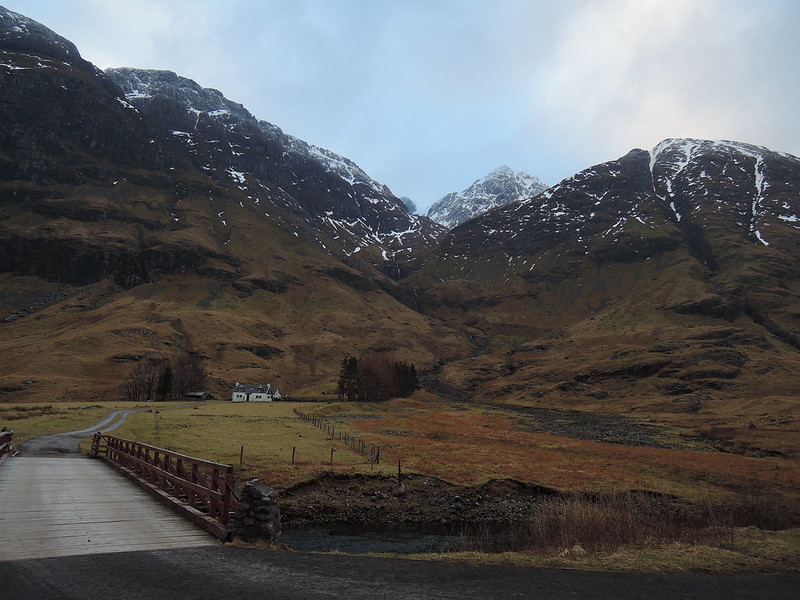 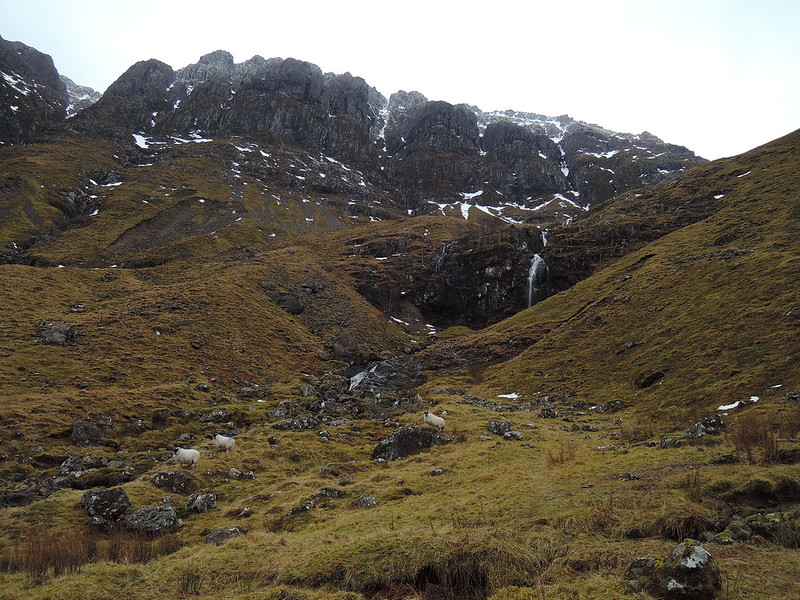 Back down to car park, path was fairly busy for a Saturday but the Stob Coire nan Lochan car parks were busier. 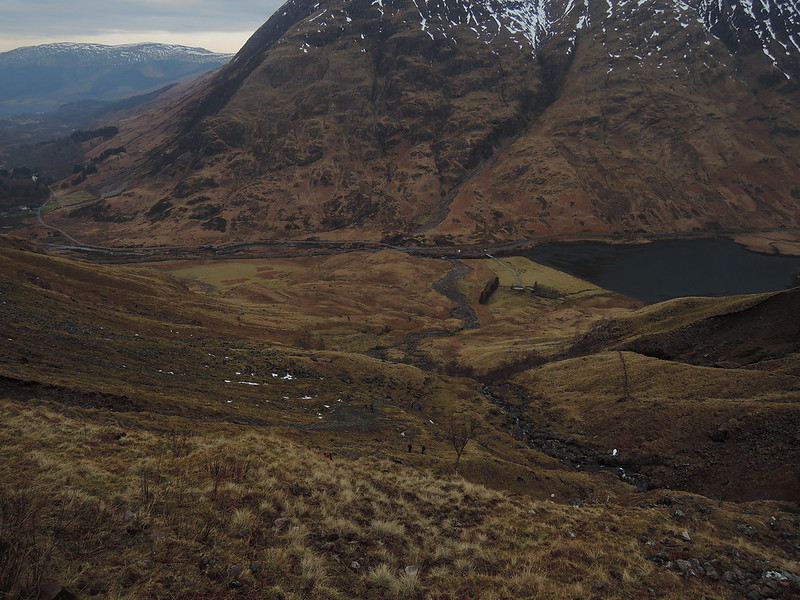 Further up, the path gets less easy to follow - it goes down to the burn for a couple of sections then back up. Stob Coire nam Beith ahead here - I was planning to go over it on the way back and descend the snow slopes at the col on its right. Bidean is on the left of SCNB: 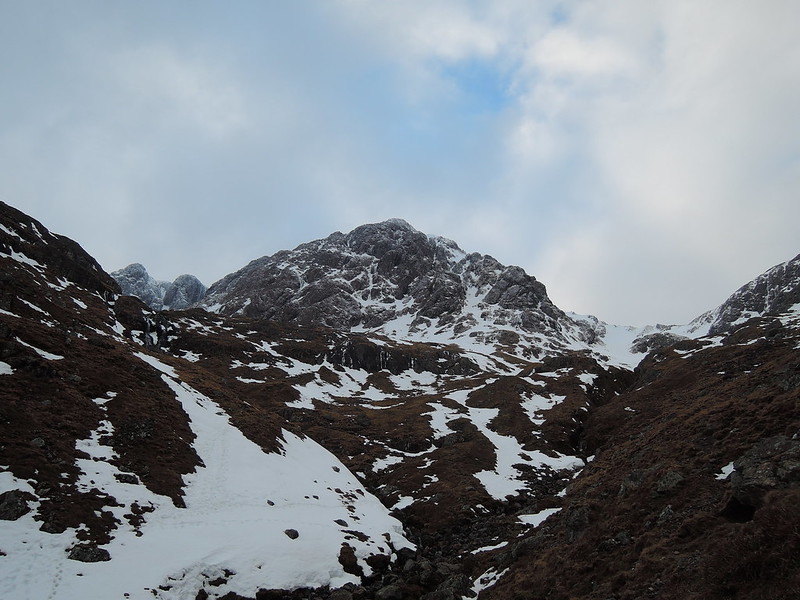 Back to Aonach Eagach: 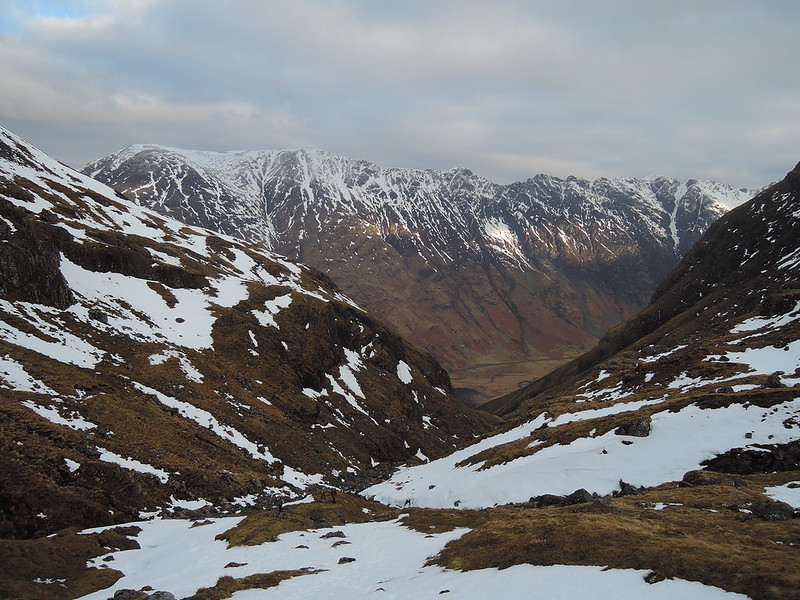 Couple of climbers make their way up Summit Gully on SCNB, met a few later who had been on it so it's possibly next on the list... 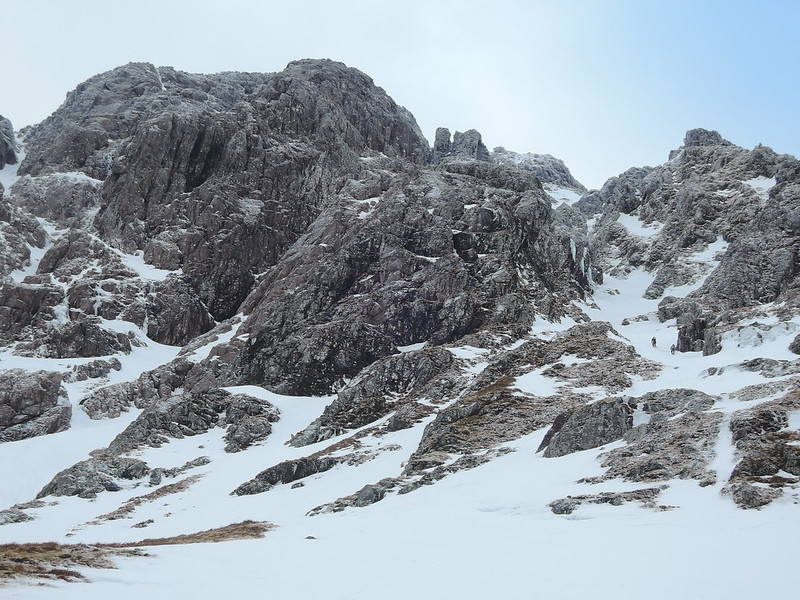 Probably came to far up towards SCNB so had to cross angled snow when I turned left for Bidean. 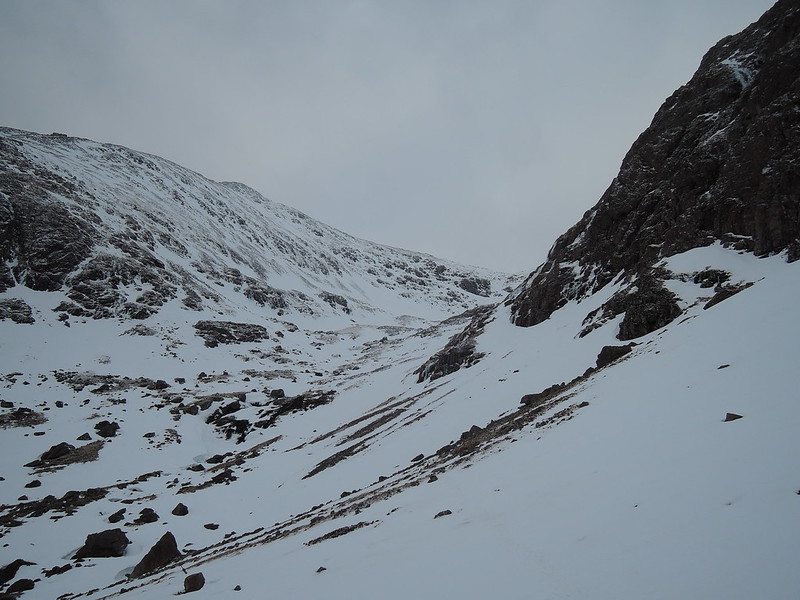 Round the corner and Bidean appears again. 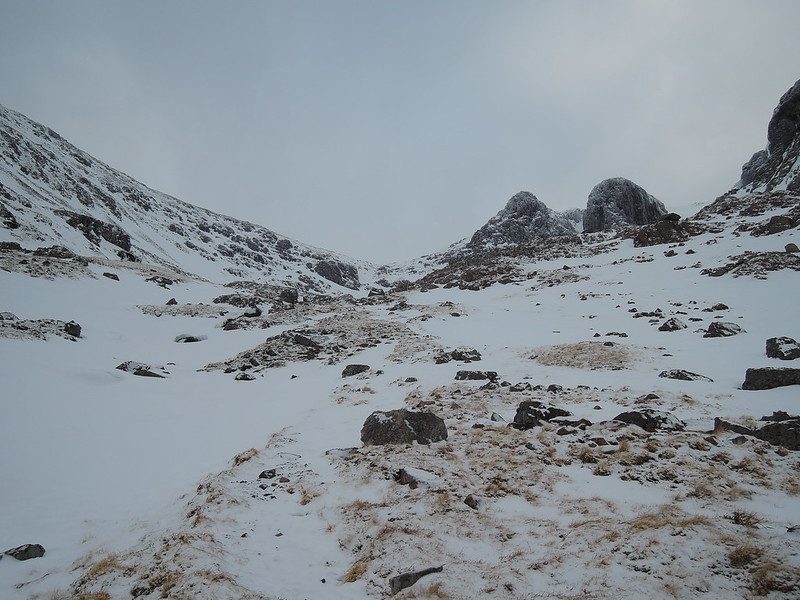 Last bit of the approach, the target is in the middle of the pic here. Diamond Buttress is on the left and Church Door Buttress on the right with Collie's Pinnacle in between. Central Gully goes up between the 2 buttresses so you have to head around Collies Pinnacle. Either way there's a step, Grade I on the right and Grade II on the left. 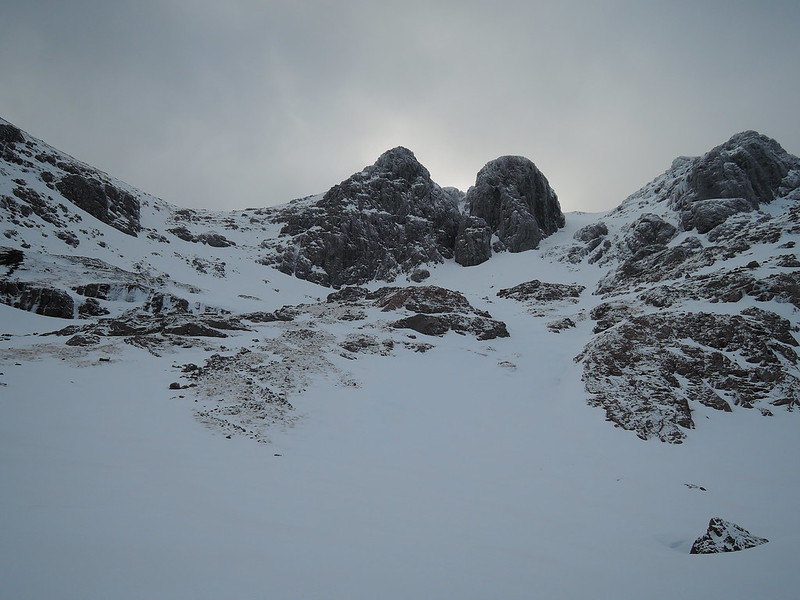 Getting closer, bit of clag coming in. 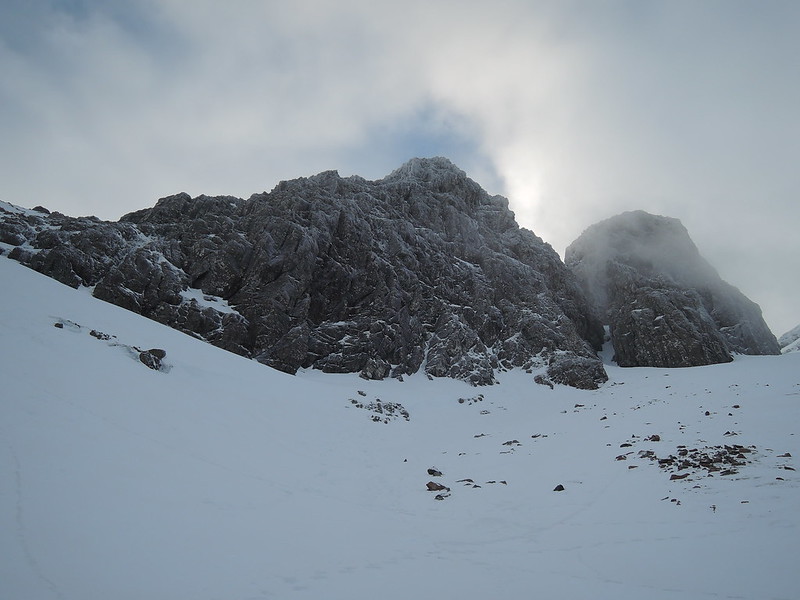 On the left of Collie's Pinnacle, thought I'd give this a try first. 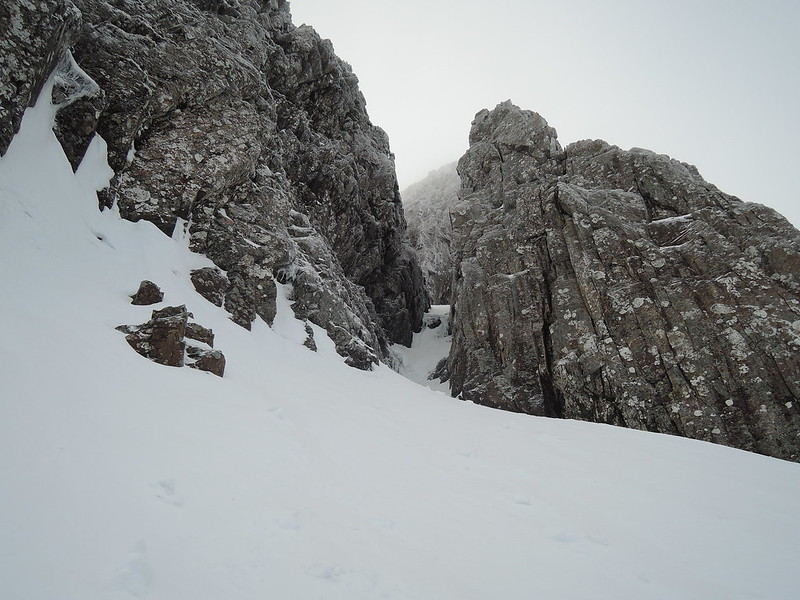 Snow was fairly firm, the tricky step was on ice though. All the winter stuff I've done so far has been on snow so I wasn't sure about the steep ice - decided to back off & go the easy way... 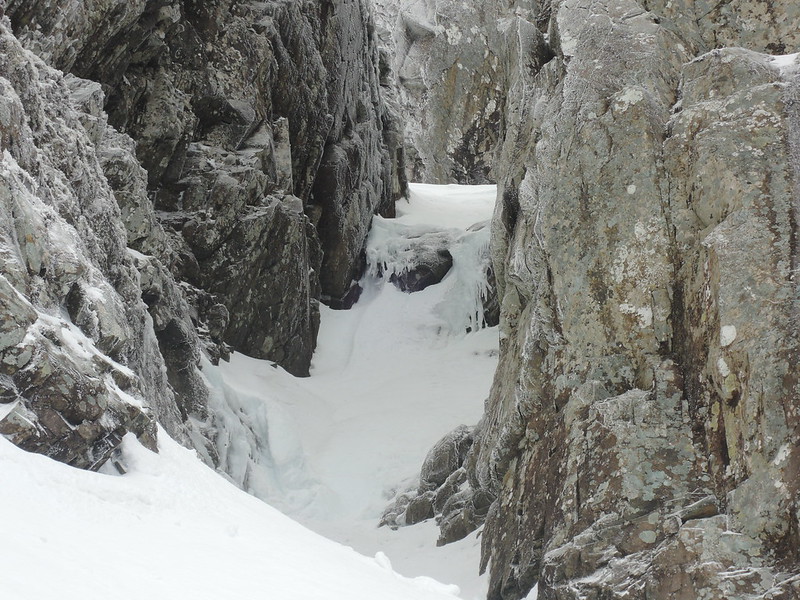 ...the step up on the other side was also ice so I got a bit of practise on it anyway. 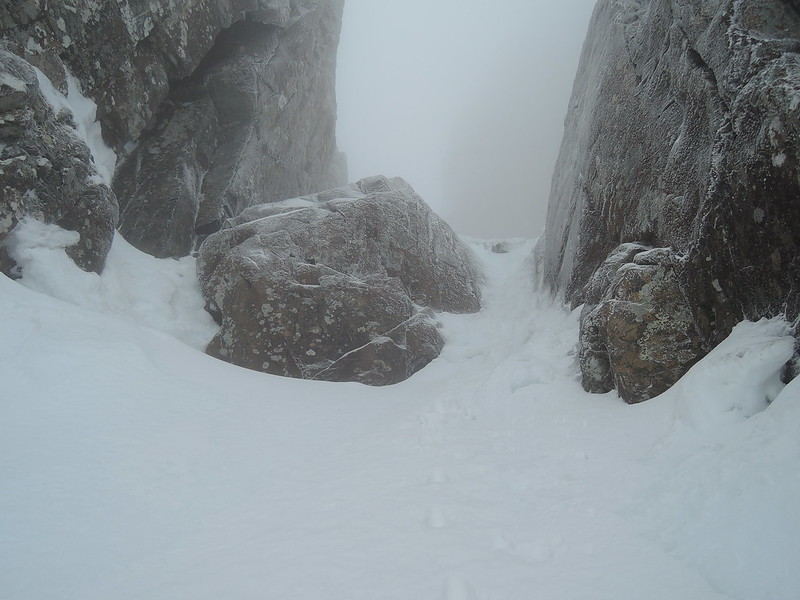 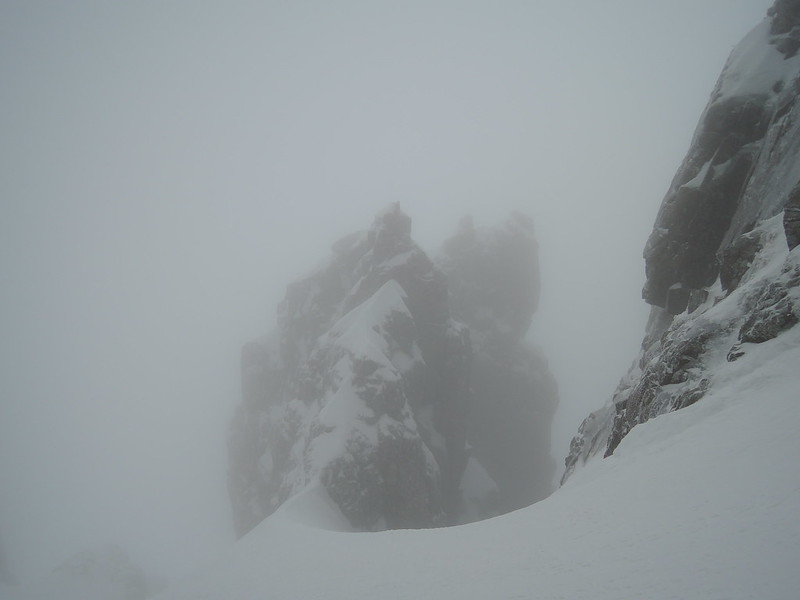 Nice snow on the way up, getting pretty exhaused after the steep walk in though and the calves were burning with all the front pointing. 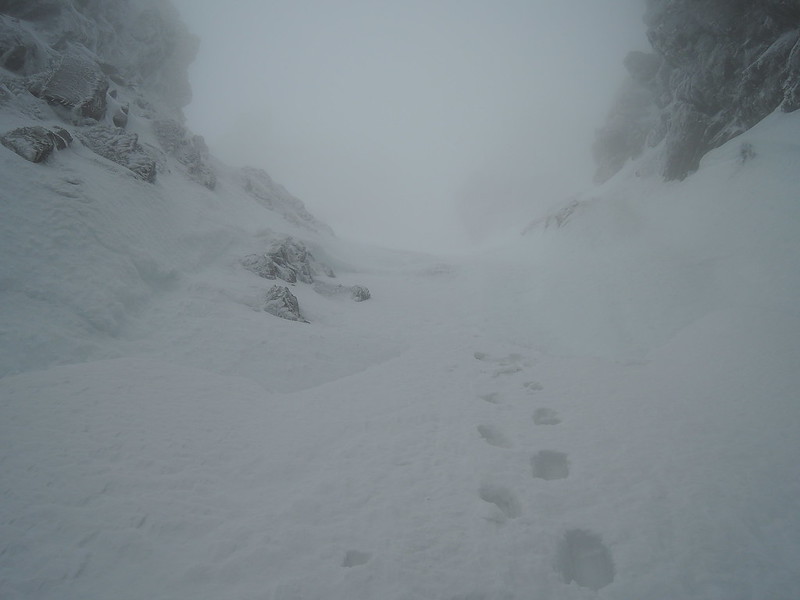 Higher up there's another fork, easy on the left and harder on the right this time. I went to the right since I'd bottled the earlier one. Again there was a steep icy step but I had more confidence that the crampons and axes would hold this time. 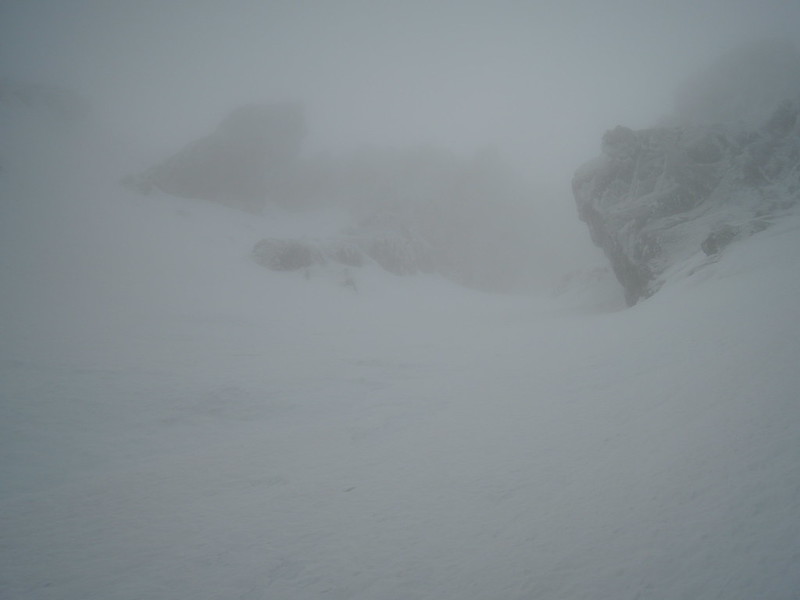 Looking back down the gully from the exit. Stuck a poly bag on a rock here & had a seat, completely knackered. 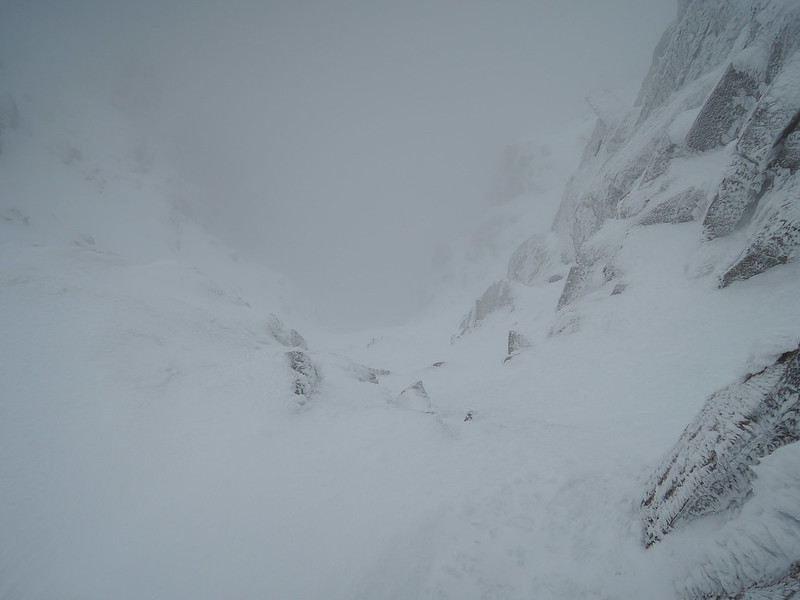 Turned left on a short, narrow rocky ridge then I was on the ridge between SCNL and Bidean. A few folk were making their way up from SCNL. 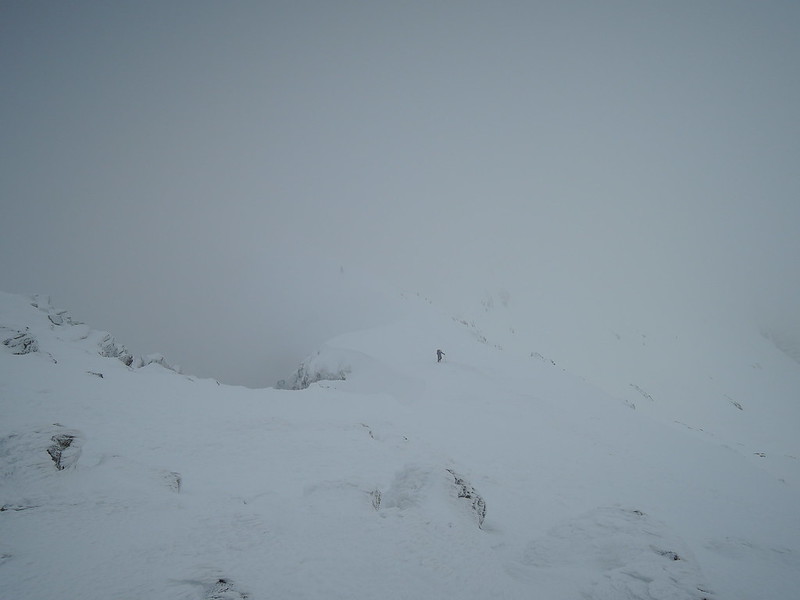 Short walk to the summit, tricky navigating off it in clag to Stob Coire nam Beith so the GPS was handy. Met a couple descending SCNB, they knew some of the climbers who died in an avalanche in Central Gully two years ago. Not much ascent to SCNB, again it was tricky finding the right descent ridge from the summit with poor visibility: 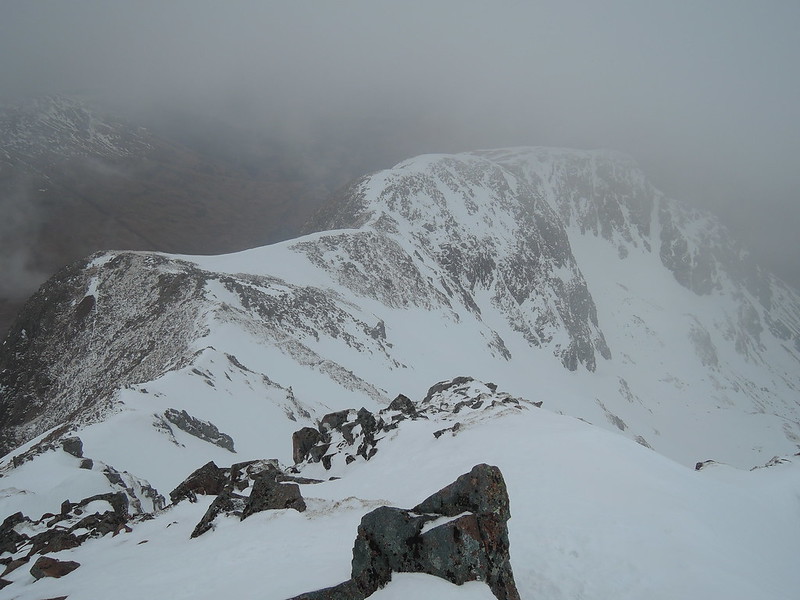 Back down towards the road. 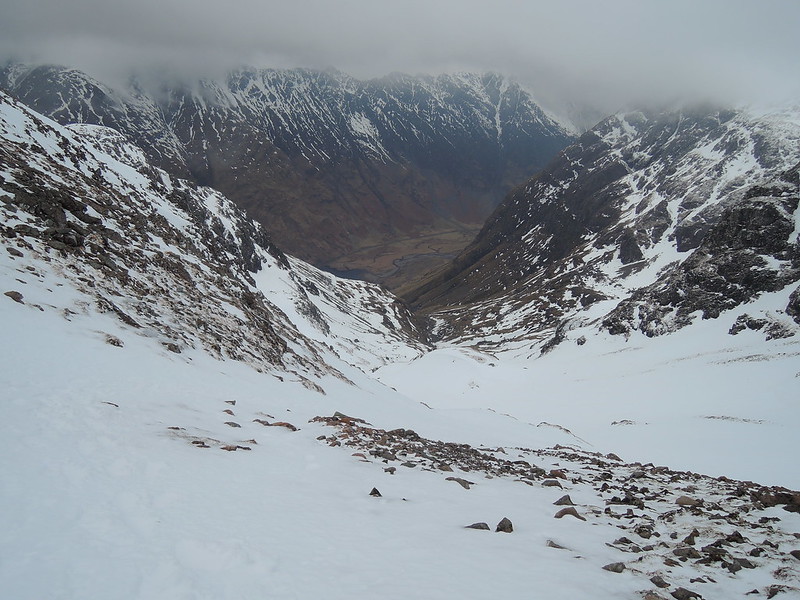 Descending from the col. 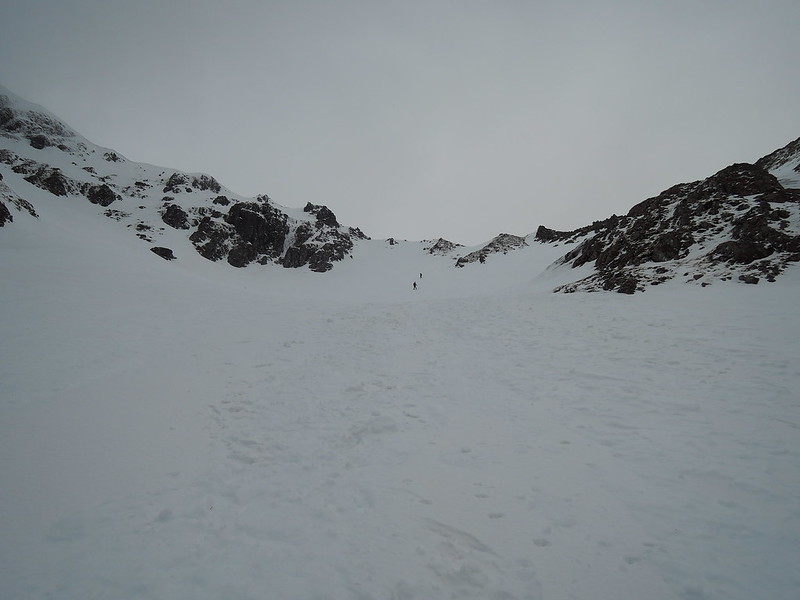 Path to the car park is a bit slippy but doesn't take long to get there, picked up a bottle of Highland Park on the way back to help with the calf pain

good report and pictures gman, not done anything on this side of bidean, deepcut chimney is high on the list. i managed crowberry gully on the buachaille on saturday, lots of snow in the gully and just enough ice for the crux. you look like your planning well , do you have the smc scottish winter climbs book ? great little book you can take with you for reference. i would look at stob coire nan lochan next time , you have broad and forked gullies at grade 1 and boomarang at grade 2, broad gully is the normal decent route, you could go up forked down broad and up boomerang in a day no problem and the path in although long is so much better than the one to stob coire nam beith.

Got the smc book last summer, handy for finding low grade climbs with stars. I'll give those ones on Stob Coire nan Lochan a go, met a guy on Bidean who had come up NC Gully and said that was worth a look too - just need to wait for the legs to recover!

Good report and some good pictures, I was in Kinlochleven the other week for an Ice climbing lesson and past Bidean nam Bian which looked stunning that day. Thanks for sharing

Not got the guides Gman, what's the grade?

Looks good, we were just round the corner on SCNL. Did SC Gully & Boomerang Gully.
Friends did summit gully yesterday.

That looked really fun.
Been up and done some routes on Beithe in the summer and the path up that way really is a leg wrecker!

prog99 wrote:Looks good, we were just round the corner on SCNL. Did SC Gully & Boomerang Gully.
Friends did summit gully yesterday.

Think I'll be heading to SCNL next for a look at Boomerang/Forked/NC. Summit Gully was popular with couples on Valentine's Day!

basscadet wrote:That looked really fun.
Been up and done some routes on Beithe in the summer and the path up that way really is a leg wrecker!

I can confirm this, and whisky only offers temporary relief