Yet another month when I only had one weekend day free for walking, and inevitably the weather forecast was dire

- wet and overcast all day, with upland gales coming in from the west during the afternoon. Not a day for the higher peaks, then, especially when I was out on my own... However, I thought it might be the ideal moment for a pet project I'd had in mind for a wee while, namely to try to bag the S2K Marilyn of Duncolm direct from my front door in Milngavie, without the use of any form of wheeled transport.

our_route.gpx Open full screen  NB: Walkhighlands is not responsible for the accuracy of gpx files in users posts
It would be a long walk at this time of year though, so I tried to get a fairly early start. The roads were quiet this early on a Sunday morning, and the short cut through Douglaston woods was already looking deceptively rural. 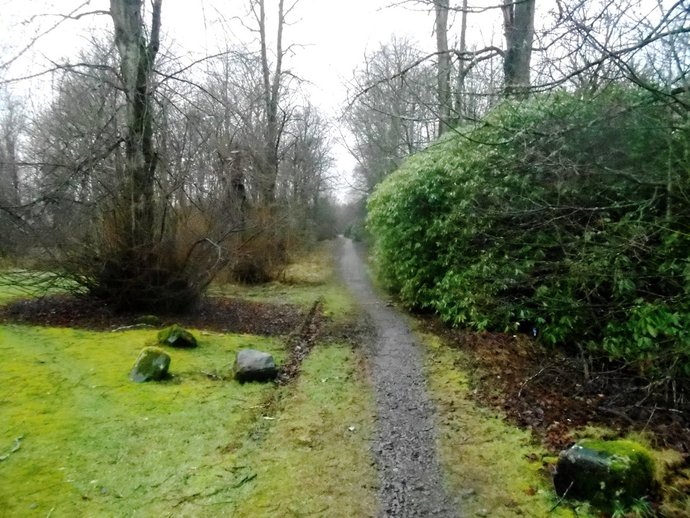 I then made use of a popular Cattle Creep under the Milngavie railway line... I zigzagged up through the streets of Milngavie in a northwesterly direction, cutting up to the roundabout on the B8050 to take Hunter Road on the right, and then Craigton road on the left at the north end of Hunter Road. I eventually left Milngavie village via the wee footpath towards the hamlet of Craigton that branches off on the right of Craigton Road. 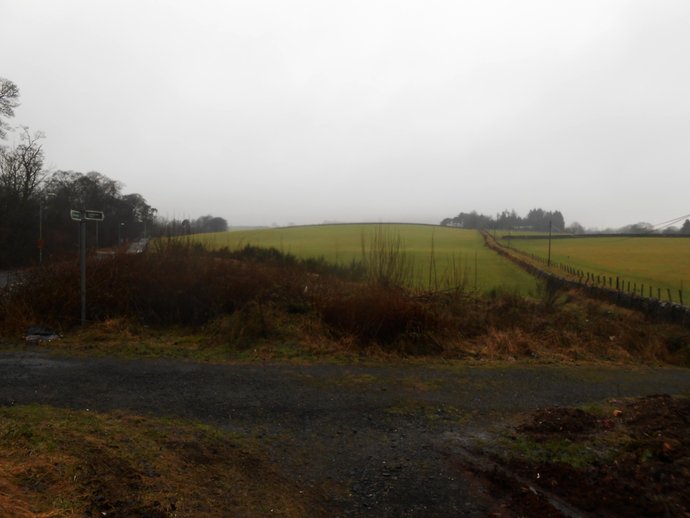 At Craigton itself, I cut across the minor road at a signed crossroads, to take the short path through Craigton Woods towards the A809. Craigton Woods were surprisingly scenic, considering that they are barely outside Glasgow. 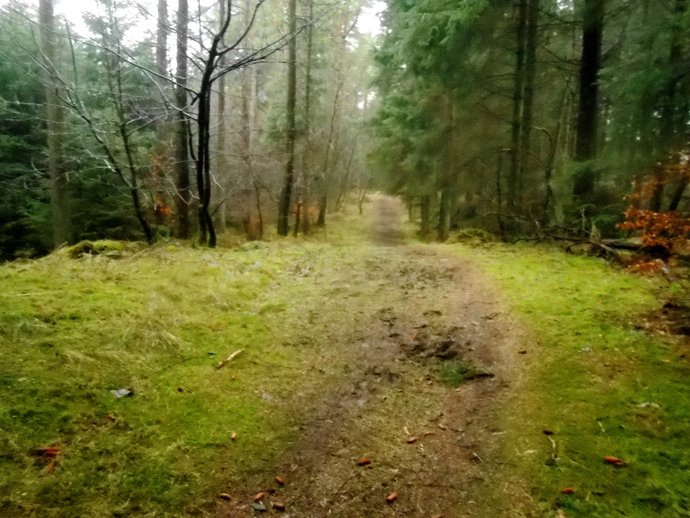 I soon came upon some impressive signage: it turns out that this short woodland walkway is part of the Clyde Coastal Path, no less! 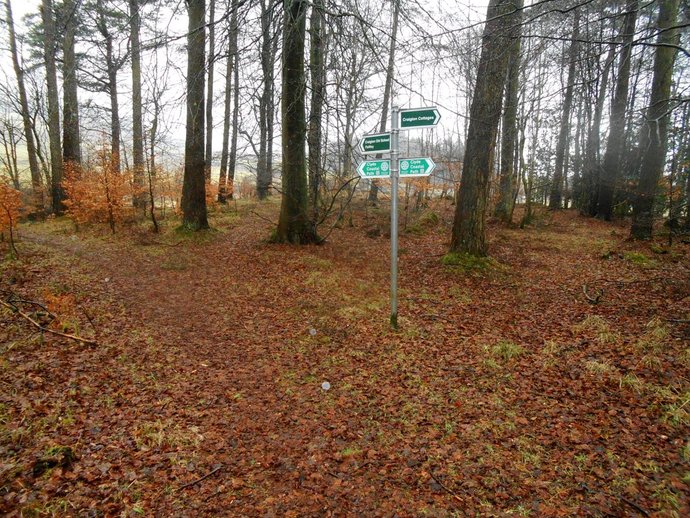 At the A809, another signed path cuts up (quite steeply initially) to the left-hand side of a burn, to join the western continuation of the Tambowie farm track, usefully skirting the farm buildings lower down the track. This wee path was very scenic lower down, where it climbed beside the tumbling burn, but I didn't stop for photography as there were several houses nearby. The Tambowie track eventually ended at a gate, just short of the second (westernmost) of two parallel lines of pylons running roughly north-south. Looking back to the north-east, Carneddans Wood was dimly visible uphill through the steady drizzle. Obviously I was about to disappear into the Clag for most of the rest of my day... ho hum I headed off uphill on a northerly bearing, passing under the pylons and crossing a wee stream. It was a surprisingly steep pull uphill at first, but I did find some sort of agricultural construction (sheep-related??) masquerading as a Neolithic burial mound

, which provided some distraction. 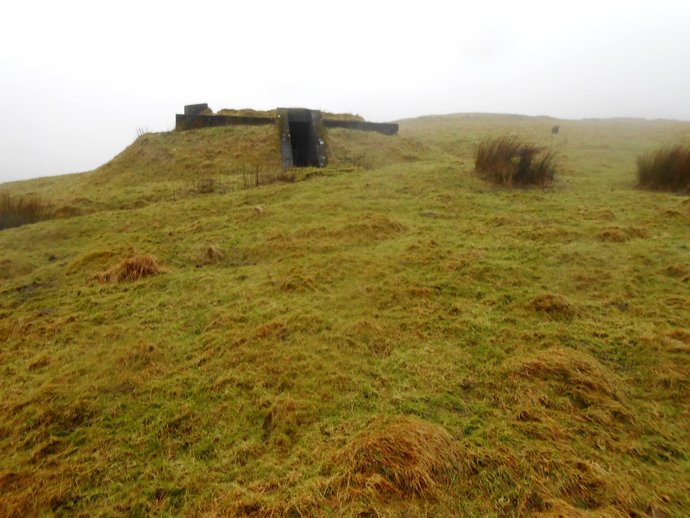 I was aiming for the eastern corner of the forestry above Muirhouses farm, but I went too far north initially (about zero visibility by now), and had to make use of my GPS to contour round to the west to find the forestry. Eventually it did come into sight, however: quite a relief, as there is a lot of flat, featureless and fairly squelchy moorland up that way There was a fairly ferocious barbed-wire fence along the south edge of the forestry, but fortunately there was just about enough of a gap between the trees and the fence that I didn't need to risk my anatomy crossing the barbed wire

. Eventually I reached the western end of the forestry's southern edge, and headed off westwards in the direction of Jaw Reservoir. There are a series of three rather strange wee hillocks around here, named on the map as "Maiden Paps". I only found one of them in the Clag, however. Soon after this, I found Jaw Reservoir, with its outflow weir looking unexpectedly impressive given today's lovely weather, plus all the meltwater from the recent snowfall as well, no doubt. It is interesting how very different Scotland's hill landscapes can be from one part of the country to another. Although most walkers are very familiar with the differences between the jaggy hills of the West Coast and the rolling upland plateaus of the Cairngorms, for instance, I'm beginning to realise that even lower hill ranges each have their own distinct ambience. There is a world of difference between the flat and fairly bleak moorland of the Campsies, fringed with impressive escarpment cliffs, and the more shapely forms of the Pentland Hills. This was my first outing in the Kilpatrick Hills, but they turn out to be quite different again, with water and forestry probably being their defining features. In fact, there are some eleven bodies of water (lochs and reservoirs) in just a few square kilometres of upland moor and forestry. On a day like today, the amount of water in the atmosphere (and by now on me) arguably added even more to the wetland ambience Soon a rather scenic boathouse emerged through the Clag, at the thin strip of land dividing Jaw Reservoir from Cochno Loch. Although not marked on the OS Landranger map, there is a fairly good ongoing path right round the southern and then western shores of Cochno Loch. I followed it until Cochno Loch's western shore curved eastwards again, and then headed off on a bearing in the general direction of Duncolm, on quite rough tussocky moorland over the intervening hump of Craighirst, and then onto the broad southern ridge of Duncolm itself. After a long trudge over the moorland, interspersed with wee clumps of birch trees and patches of bog, it was quite a relief to reach a fairly definite path heading northwards on the right-hand side of a line of drystane dyking, clearly heading towards Duncolm summit The path soon crossed the wall to make a zigzagging attack on Duncolm's unexpectedly steep summit cone. Before long, the trig point came into view 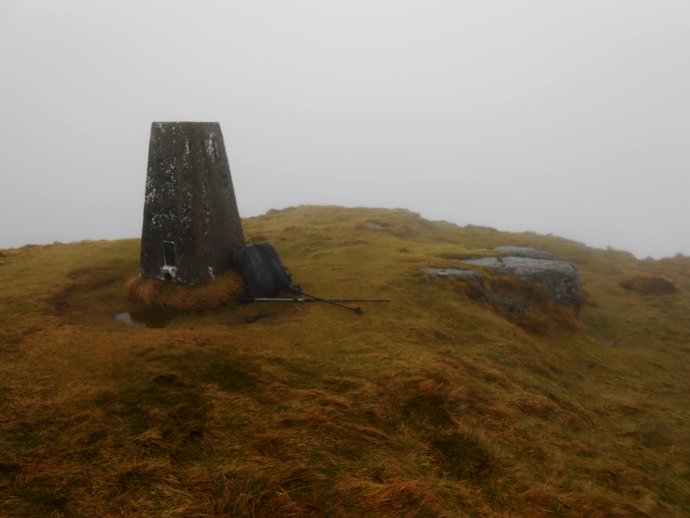 There was even a wee recalcitrant patch of snow just to the south. It would have to be said that it is remarkably satisfying, if you live in one of the cities of Scotland's central belt, to be able to set out from your own doorstep and climb something with a trig point and snow on the top, even if it is only a lowly 401 metres After stopping to eat my sandwiches and M&S wasabi peas (grand on a dreich day!), I headed off southwards again, hoping to find Greenside Reservoir and then cut down into Duntocher by the track beside the Loch Humphrey Burn. Luckily, I soon found another drystane dyke, complete with a big ladder style. I didn't have to cross the style however, because the continuing path southwards was actually on this side of the wall. Soon this led to the Greenside Reservoir, which had a surprisingly impressive waterfall today at the end of its northern feeder burn. 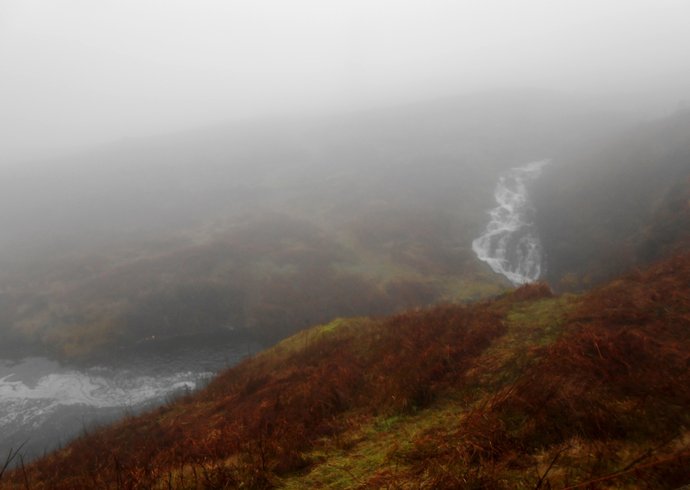 A good path led round the east side of the reservoir to join the track running along the north of the Loch Humphrey Burn, which was also in full spate today. 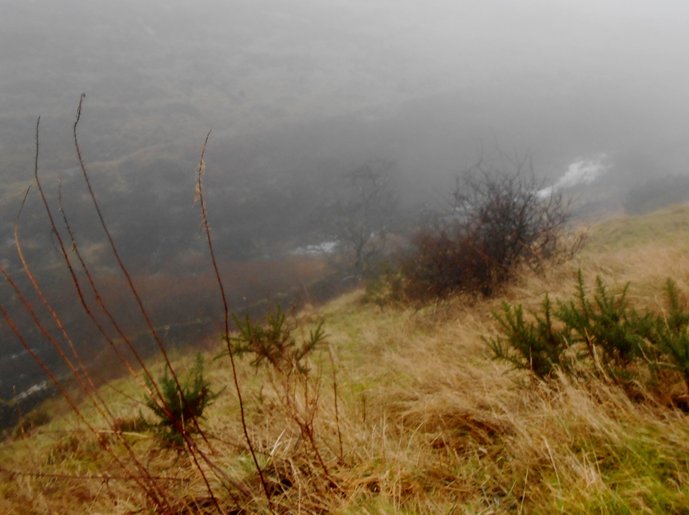 From here it was a straightforward schlep down into Duntocher, although I had to take a bit of a detour through a housing estate rather than risk a pavement-less section of the more direct road down towards the A810. This eventually brought me out a bit further west on the A810 than I'd ideally have liked, but on the bright side this route offered the unexpected advantage of passing O'Donnell's Bar, a fine establishment where of course I had to pop in for some very welcome liquid refreshment while I dried off a bit... another pleasure of hillwalking without a car, of course

!
I was fairly drookit by now, and I'd have to admit that the road walk back to Milngavie was a bit of a dreich plod through the roadside litter (mainly the predictable crisp pokes, plastic bottles and fast food refuse, but there were some unexpected offerings including a death metal CD and a Glasgow A to Z

...). Had I not stopped for a pint at Duntocher, I'd have managed my original objective of getting back to my front door without the use of wheels. In the event, however, my wife took pity on me and picked me up just after the "MILNGAVIE" sign on the B8050. All the same, I can say that I got from Milngavie to Duncolm and back without the use of wheels: an interesting wee walk for a very wet day, and definitely different to any that I've done before

My uncle keeps asking me to climb Duncolm. He walks it from Dumbarton and over to carbeth. Maybe one day

That's brilliant doing a hill from your front door. The only one I could do before it got dark is only 217 m even though I live in Section 26 which contains Duncolm. Must have done it in poor weather, as I don't seem to have wasted any film on it 11 years ago.

. Good effort though. I looked at going over to Duncolm from the Whangie about a year ago but all that bog in the poor weather put me off.

Surely the next logical challenge is Earl's Seat from your door? A little further but looks doable...

. Good effort though. I looked at going over to Duncolm from the Whangie about a year ago but all that bog in the poor weather put me off.

Surely the next logical challenge is Earl's Seat from your door? A little further but looks doable...

Aye, it was wet all right

- however, actually a lot more fun than the photos make it look! That pint in Duntocher certainly helped...
Yes, I reckon Earl's Seat would also be do-able direct from my hoose. The only thing is that I've already done that one, albeit from the Fintry side. I would like to have a look at it from the south via Dumgoyne, right enough ... definitely an interesting idea for the future, that.

Sgurr wrote:That's brilliant doing a hill from your front door. The only one I could do before it got dark is only 217 m even though I live in Section 26 which contains Duncolm. Must have done it in poor weather, as I don't seem to have wasted any film on it 11 years ago.

Ah well, they all count those Marilyns, even the lower ones!
It might not exactly be Glencoe, but I'm sure you'd agree that there's much more to do walking-wise in poor old Section 26 than might initially be expected