A Tale of 2 hills

A Tale of 2 hills

As we all know there was a nice little weather window forecast for the weekend, especially Saturday - the obvious problem for one or two of the males species was the date and only the brave would venture out leaving her indoors at home to amuse herself

I was fortunate in that Mrs F had marked on the calendar that she was going to a dog show, so I leapt into action and posted my intention to escape to the great outdoors

My initial thoughts were leaning towards a couple of Munro's near Kinlochleven, however no sooner had I posted and a PM appeared in my inbox. kmai1961 was keen to get outdoors but because she is far more sensible and studies every walk with a fine toothcomb, unlike most of us men we prefer to be gungho and jump in feet first

Karen was concerned about the possible conditions along with a ridge walk that could be tricky if covered with white stuff, which would be almost inevitible. So back to the drawing board, I was determined to get back into Munro mode as I was suffering withdrawl symptoms, about 3 months since I last ventured above 3000ft.
After searching for red balloons, preferably in the west as the forecast was better in that vicitinity, I knew wherever I picked it was going to involve a few hours in the car, which also means an early rise at silly o'clock

The plan was to start walking at 9am, Tommy elected to drive up on Friday evening and sleep in the back of his luxurious van, whereas the rest of us got our heads together as we were coming from 3 corners of Scotland. I met up with Karen near Spean Bridge with the intention of leaving my car in the car park at the Commando Memorial, we then met up with Evie in Invergarry and left her car there and headed west down the single track road. I knew parking was limited, so rather than take 4 vehicles we were considerate to our fellow walkers and just occupied 2 spaces

We met up with Tommy at 8.45 and set off just before 9am with the intention of following the WH route

The weather initially wasn't too clever, but we have faith in the forecasters who had stated that the big yellow thing would make an appearance at 9am for at least a couple of hours One of the problems I have is limiting the number of photo's I can post, I took over 180 so there will be a lot of dithering and head scratching

The initial part of the walk was uneventful, there is an excellent path to follow, once we reached the snow line at about 2000ft whatever that is new money, we stopped to alter our footwear. The snow on the ascent of Spidean was crisp and firm so crampons were the order of the day for 3 out 4. I decided to be different, I left my crampons in the car and elected to try out my recently purchased micro spikes. One thing that became very obvious, I was ready in a few seconds whereas putting on crampons is a bit of a faff Karen and Evie with a stunning backdrop Because the visibility was so good we made a bit of a fopar and headed a bit to far east to what we thought was 'the' summit, however when we looked west it was obvious we still had a bit of going up to contend with 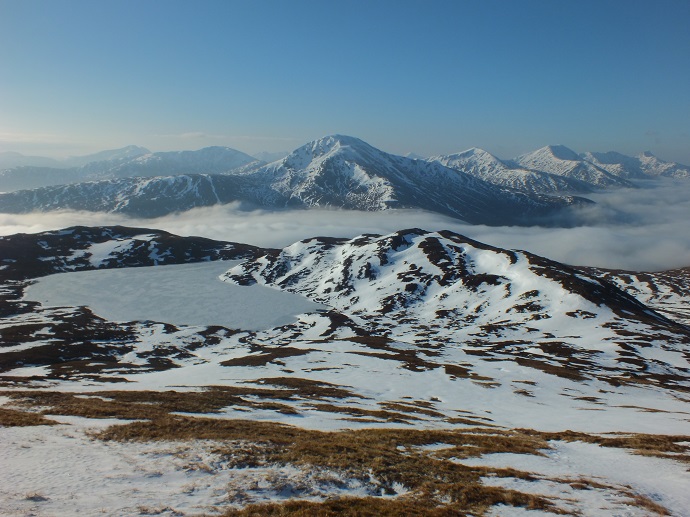 Loch Fearns with Gairich in the background Side on shot indicating the angle of ascent up Spidean, nice crisp snow Did Tommy manage to multi task? You decide Looking NE, cotton wool cloud was filling up all the glens Spidean Mialach summit, cornices in the foreground definitely not for walking on Gleouraich the highest point in the photo, looks fairly easy from there 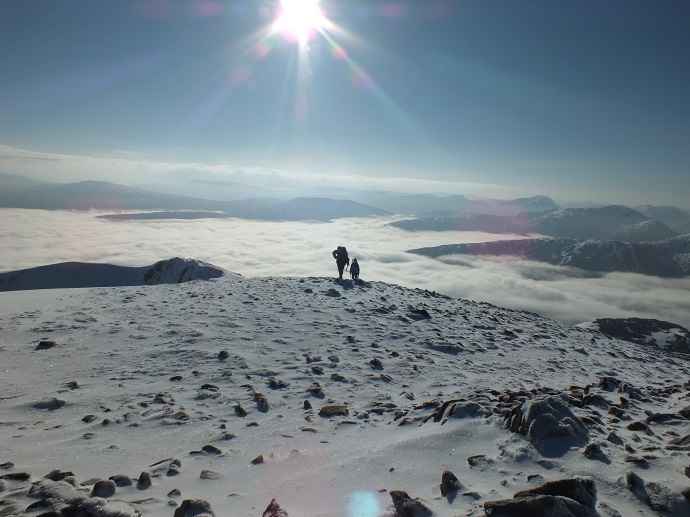 Karen & Evie appearing on the horizon

The summit of Spidean Mialach was reached and the views were out of this world, this is the reason we all soldier on in all sorts of conditions in the hope that we get views like we were honoured with

One of the problems with having such superb views is that one gets snap happy, not a problem for most folk but it does make it difficult to try and remember what direction the camera was pointing in Do views get better than this? The descent off Spidean was fairly straight forward, great care was needed on the crisp snow, little did we know everything was about to change on the ascent of Gleouraich

The biggest problem was the snow on the ascent, it was almost slushy and made for really hard going, there were foot steps in the snow but they were from a descending walker who had been taking much longer strides - as you do on the descent Side on shot indicating the angle of ascent The 'pauses' on the ascent were rather frequent and we were all struggling, Evie more than the rest of us as she has been struggling to get rid of bronchitis and found it especially tough with the extra weight on her feet with the crampons

About half way up we met 3 members of Perth Hillwalking Club who were slipping and sliding their way down Gleouraich, so we stopped for a well earned rest and a chat

Good to meet you guys, I checked out your website as requested and you never know I may even join you

Because we were concentrating on the ascent, we failed to notice the weather changing, low cloud was coming in from the west and that would mean no views from the summit of Gleouraich

The summit was reached and a disappointing small cairn marked the highest point, I won't post a photo of the cairn as there are much better photo's deserving to be seen Looking west along Loch Quoich on the descent below the cloud The descent off Gleouraich was interesting and challenging, there is a good zig zagging path leading you down, however the same slushy snow was covering parts of the path and on the higher slopes made for some 'fun' traversing/descending. Both Tommy and Karen opted for a "bum slide", whereas Evie and I are far too sensible, mainly because we didn't want a wet backside

The views on the descent were awesome, the cloud that covered Loch Quoich earlier had disappeared, which begs the question where did it all go

Eventually after 6 and half hours we arrived tired and weary back at the small car park, however we were all buzzing having experienced one of those rare days in Scotland

Hopefully the photo's do this superb area of Scotland justice

Many thanks to my colleagues for making the day really memorable, hopefully a few more photo's will follow

The good news is that weather permitting I will be able to head for the hills next Saturday, as the dog show is definitely on He wasn't scared of us, obviously sussed out we weren't carrying guns The ladies appearing out of the "bracken substitute", smiling because the cars are in sight

Smashing report - we obviously need to revisit these hills in winter conditions. Stunning area - thanks to you all for letting us share your adventures!

I know what you mean about constant picture taking, Martin. Editing then becomes very time consuming when you get home and ready to post!

I'd been looking forward to this report when you announced that you were climbing these two. For the three nights before we arrive on Skye, I'm staying by Loch Garry and these hills are definitely on the radar, so this is very timely. If the views are anything like those you got when you weren't in the cloud, I'll be happy. It looks like a magnificent mountain walk.

Fantastic views and pictures, pity about the clouding over.

The last time I had crampons on was on the 840m top south west of Gleouraich. I stopped there and just admired the view and/or chickened out of the continuation which I thought I would struggle with.

Cracking report as always martin,was a great day out with good company.

Nice to meet Karen and Evie. Hope to do more walks with yous in the future.

Ohh and of course I didn't multitask, I'm a man its apparently impossible

Oh, yeah....it was an incredible day. Amusing and informative recap of the day, Martin, as always, and great photos, too. Thank you, thank you, thank you all, for the one of most amazing days I've ever had in the hills. (I seem to keep saying that, but I'm fortunate to keep having them.)

Here are a couple more photos showing the contrast between the two summits: Still smiling, but no' so much sunshine

I stopped there and just admired the view and/or chickened

These two are brilliant hills, and you got such a brilliant day

Thanks for all the kind comments, that was one those memorable days Micro spikes selfie, they are idiot proof as they have 'front' written on them!!

I noticed that weather window too and the date but in a stand off worthy of Sergio Leone, my wife managed to get in "not another day at home alone" just after my "oh the weather looks nice" before finishing me off with her lengthy, decisive and obviously pre-planned two page "things we could do" list.

litljortindan wrote:my wife managed to get in "not another day at home alone" just after my "oh the weather looks nice" before finishing me off with her lengthy, decisive and obviously pre-planned two page "things we could do" list.

But we love them