Hmmm...Valentine's day again. I had decided it wouldn't be appropriate to spend it out on the hills, so stayed at home. Unfortunately a certain other person was so hung over that she didn't emerge from bed until 6pm. When the photos of inversions and sunshine on the hills started flooding in, I kicked myself for not heading out at the last minute, particularly as it had been grey and misty in Inverness all day

. Although the best weather may have passed, I decided I wouldn't be caught out on Sunday in the same way

Abriachan.gpx Open full screen  NB: Walkhighlands is not responsible for the accuracy of gpx files in users posts
With the weather very breezy but promising patches of sunshine at least, I set of for the Abriachan nursery car park on the A82. Last time I went up Meall na h-Eilrig, I had cycled up the Great Glen Way from Inverness and taken the shortest route from there to the summit on foot, which had been very boggy. Having been introduced to the lower trails at Abriachan (not accurately shown on the OS maps) by my parents at Christmas, I decided to use them as the start of a longer walk. The lower bits are better described and pictured in my christmas report. 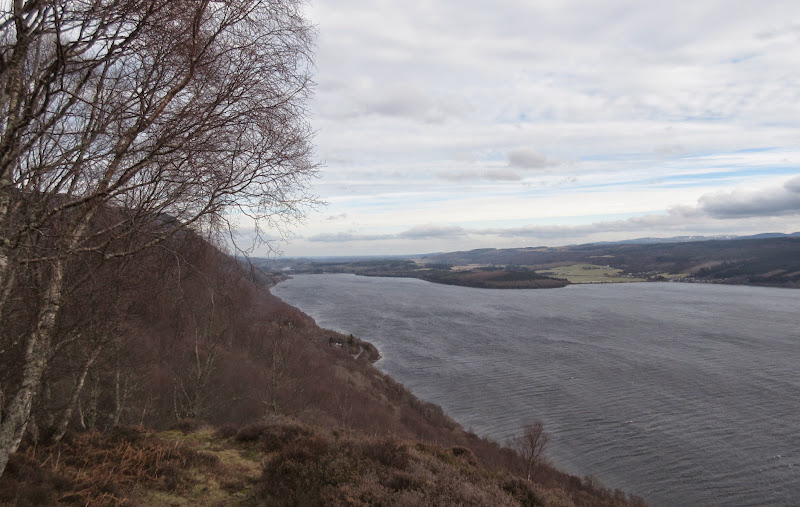 Once above the steepest slopes, I followed the main forestry track SW to Corryfoyness. This house doesn't look occupied, but it must have been until recently as it has uPVC double glazing. I then popped out on the Great Glen Way and followed it in the Drumnadrochit direction for a minute or so. 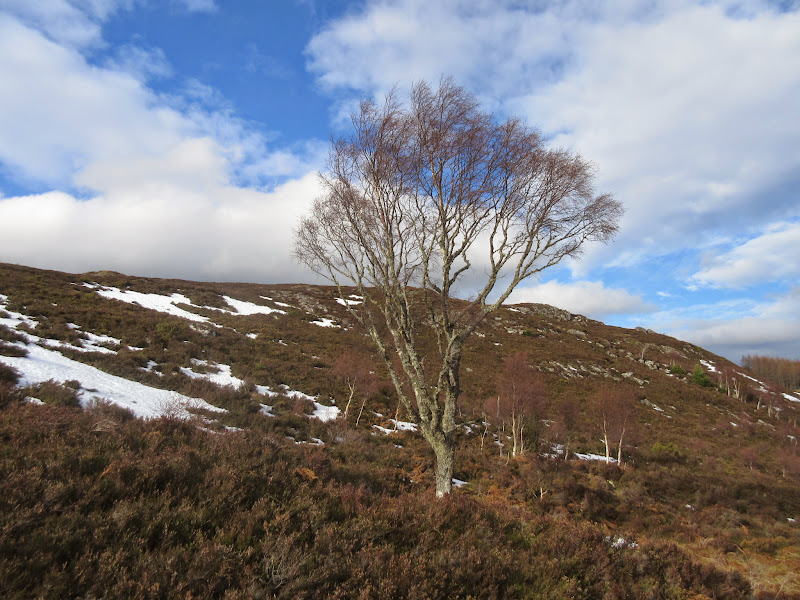 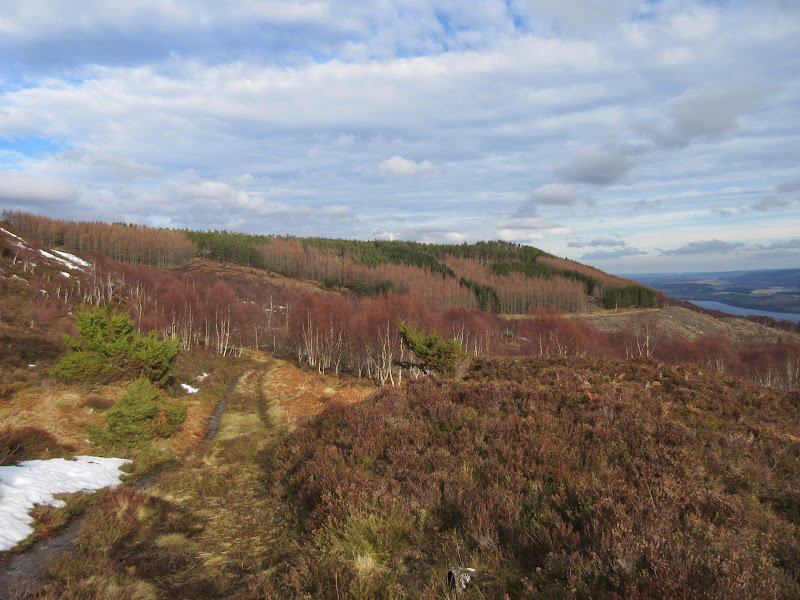 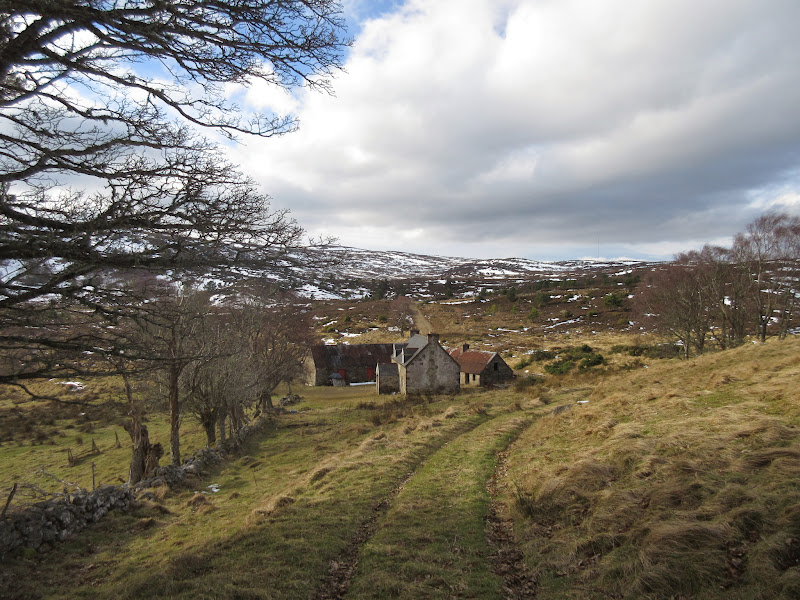 Then it was time to leave the good paths and hit the heathery hillside. There are quite a few saplings and small trees dotted about on this. Although typically pathless heather, the going wasn't too upnleasant apart from a short flat area just before the summit. There was also a barbed wire fence to cross there. 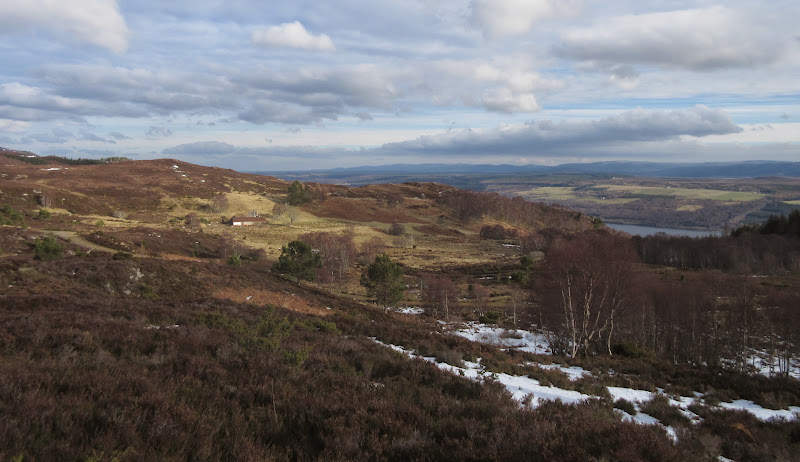 Across Loch Ness and Loch Duntelchaig to Carn na h-Easgainn: 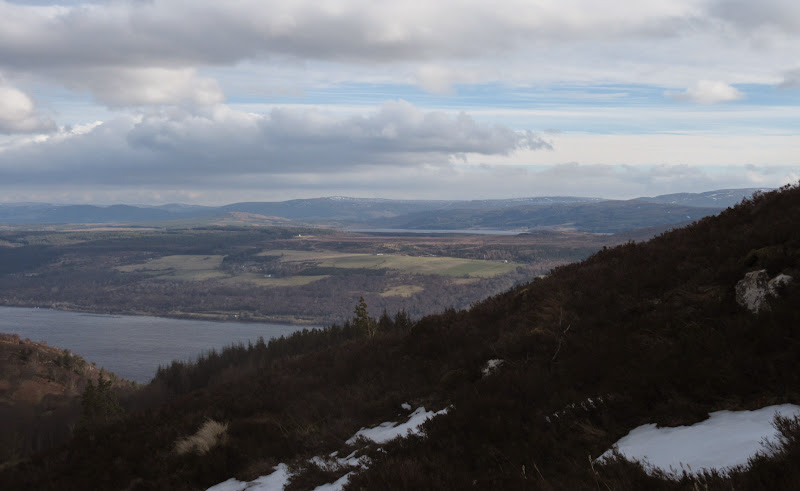 There are good views of Glen Urquhart and Meall Fuar Mhonaidh from the summit, but as the wind was coming in strong gusts, I didn't hang about. 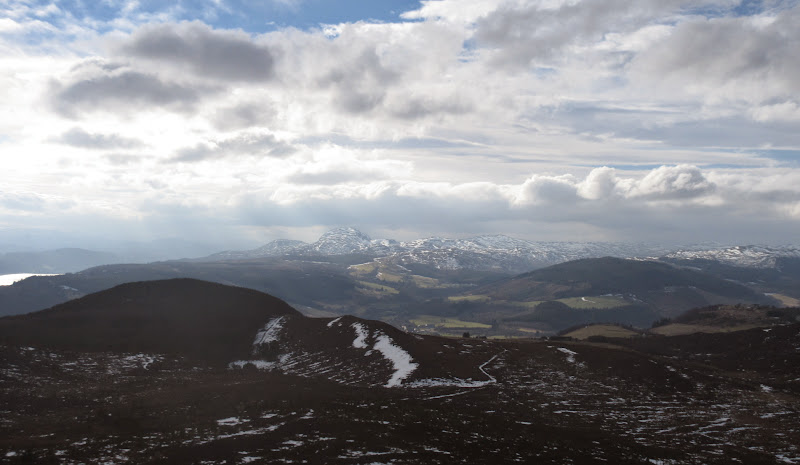 Hills at the head of Loch Monar: 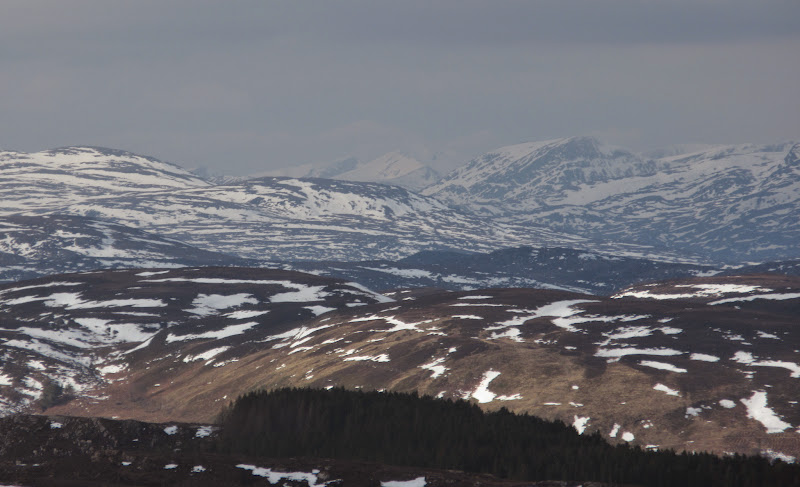 Unfortunately my route back to the Great Glen Way was the same as my previous ascent route. Towards the edge of the forest, the going is very wet and tussocky - more of a soup with grass and heather tussocks floating in it than firm ground. Another couple of fences (including the barbed wire one again) led to the Great Glen Way. Despite most of the surrounding snow having melted, this was still holding quite a bit.

Great Glen Way holds most of the snow in the area: 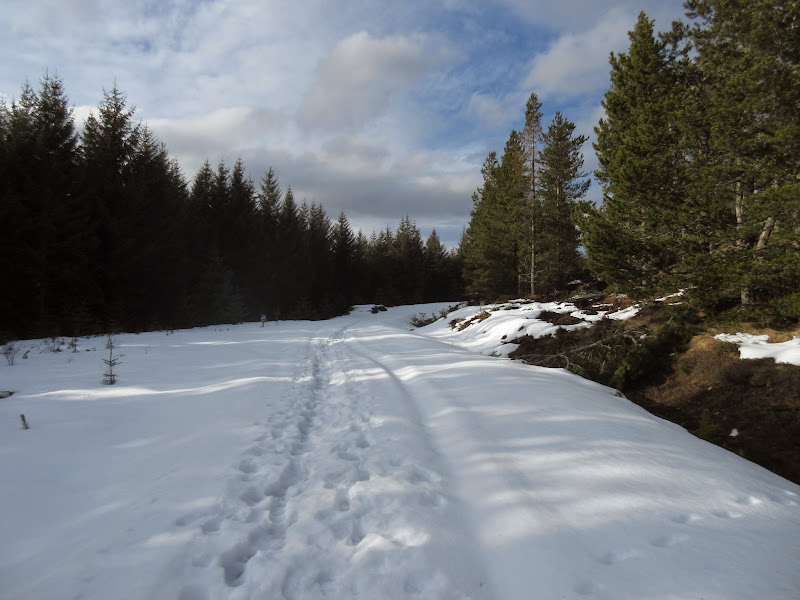 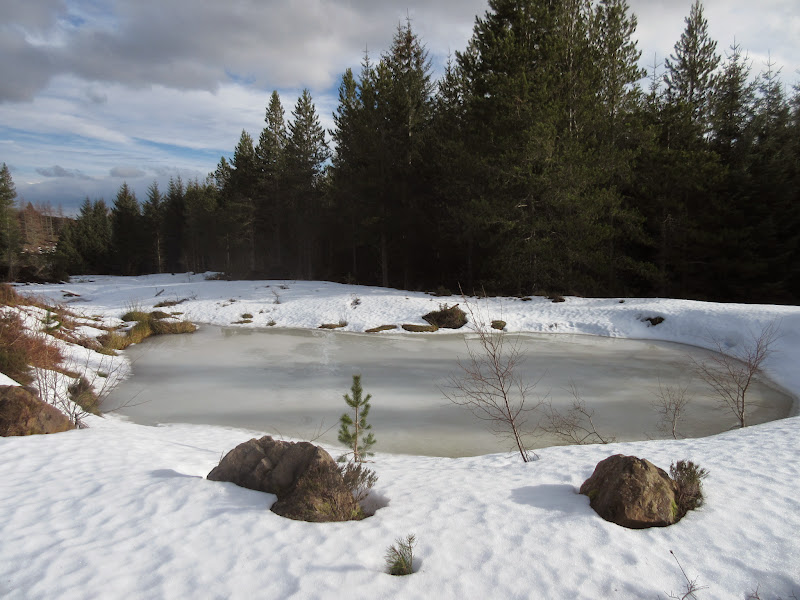 To lengthen the day I decided to throw in Carn na Leitire, which has a number of made trails over it. I should have turned back towards Inverness to join one of these but went downhill towards Drumnadrochit instead. A bit of hacking through forest rides and felled trees was required to meet the good path. 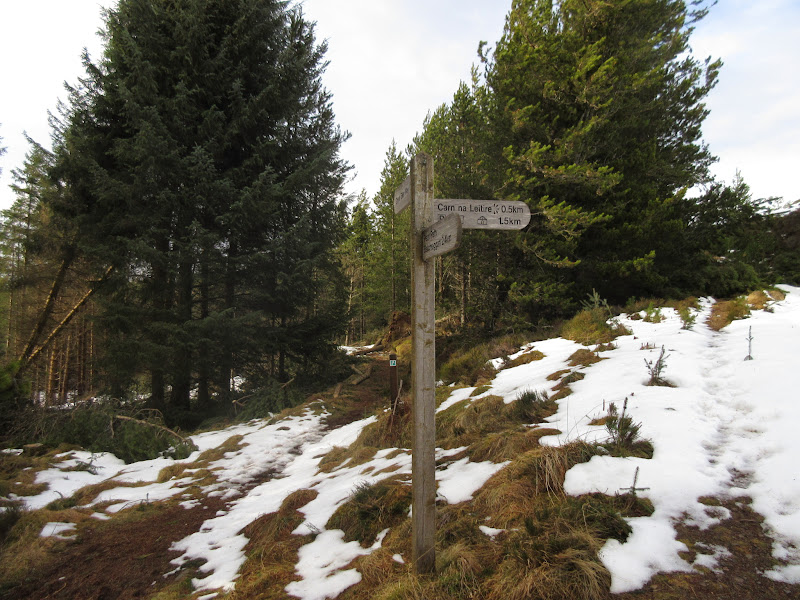 Near the summit of Carn na Leitire: 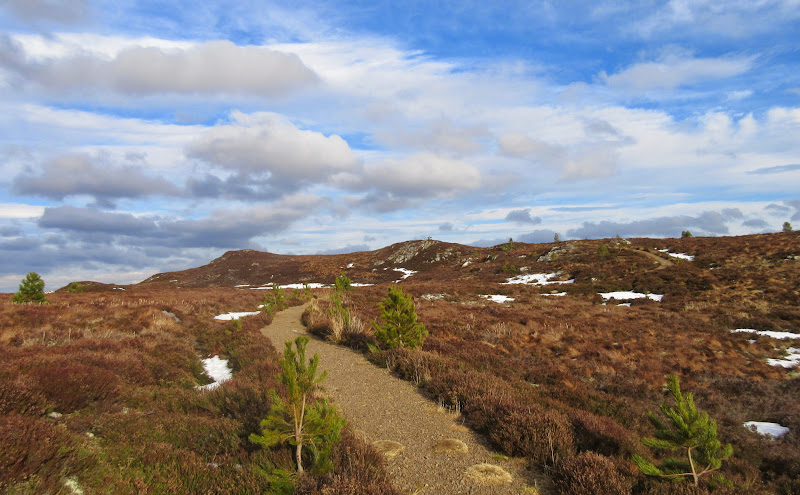 The summit has a nice feeling of being away from civilisation, but it is set too far back from Loch Ness to have good views of the Great Glen. The path back down to Abriachan is good, splitting into a number of options lower down. I mostly followed the Peat road which took me to the edge of Abriachan and back onto the route we had done at Christmas. 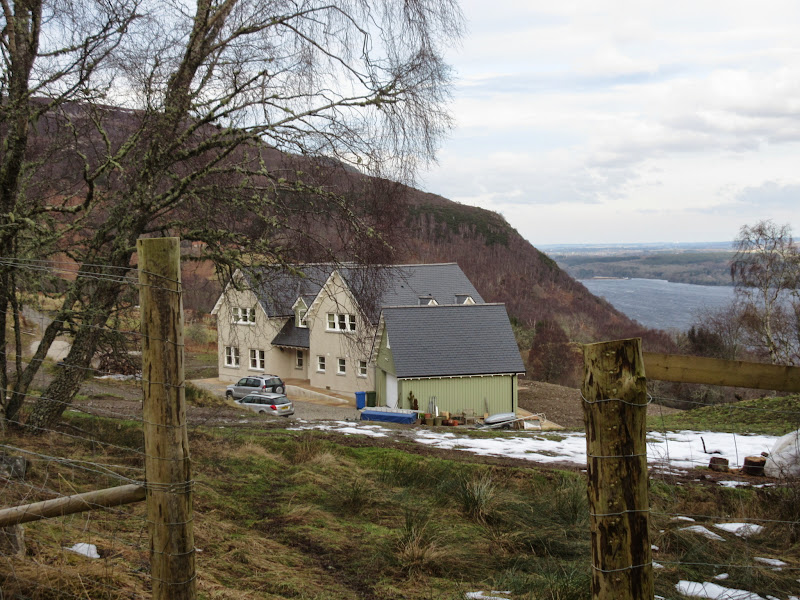 Lots of sculpture in the Abriachan woods: 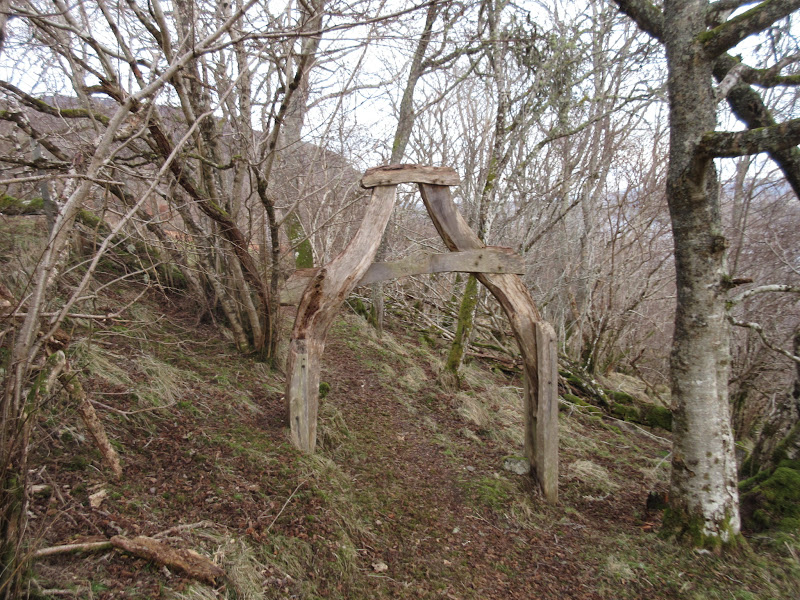 Lower down, I tried to get a good view of the large waterfalls on the Allt Killianan. The top section was visible, but like so many of the best falls, the lower cascade was hidden from view by trees and the steepness of the gully. A 20 minute drive took me home.

This looks a very pleasant walk, I know the feeling of missed opportunities - I am forever kicking myself.

Nice consolation for missing out the previous day - interesting route with the sculptures even if it did involve getting through the trees.
Know what you mean about waterfalls and often not being able to get a complete view

This looks a good wander which I must keep in mind for one of those days we don't want to drive too far!

beautiful day, report is spot on about route, unfortunately the new (looked new) barb wire fence is almost head height for me (5'2), so I just stared lovingly at the trig 200m away & called it a day ... Hunger had set in.