Sometimes a short easy hill is precisely what fills the need. After a couple of months lay off, including an enforced restriction to walking on the flat because of a back problem, it was great for me to be let off the lead, but I needed a gentle day out. The weather looked promising – although MWIS's wind forecast (at 50-60mph on the tops) wasn't that encouraging, both the Met Office and yr.no were more hopeful (only about 20mph at Loch Glasscarnoch).

Beinn Liath Mhor a'Ghiubhais Li is just a short drive from the Black Isle so we had a leisurely start and got to the parking spot by Loch Glasscarnoch about 10:30. Already the views were worth getting up for ...

Looking across Loch Glascarnoch to the Beinn Dearg Quartet 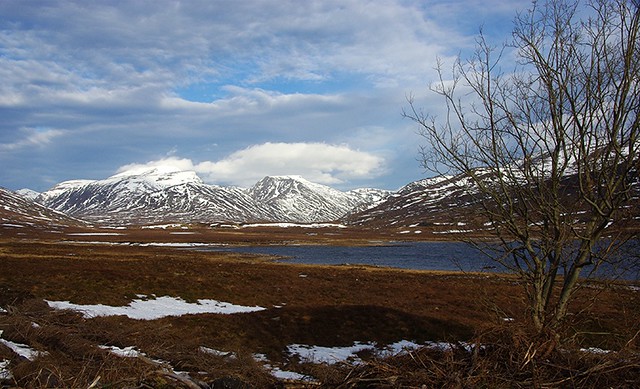 Once booted up and across the road we set off for what another Walk Highlander has described as 'a tilted bog'. Well an advantage of walking in winter was that the bog was frozen – just enough to make the ground firm without requiring skates – or even crampons. We followed the WH route up onto the plateau of Meall Daimh, with beautiful views opening up around us. It was wonderful to be out and heading up again – hill withdrawal symptoms leave me exceedingly grumpy.

An Teallach dominating the west 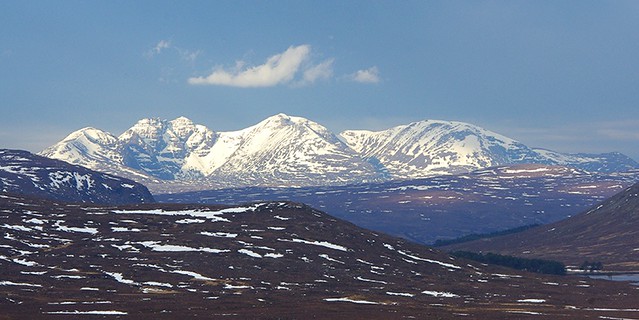 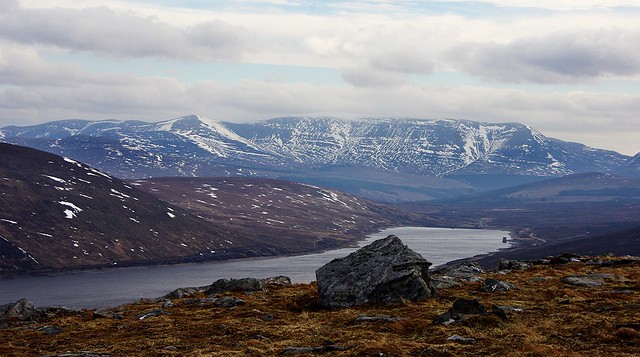 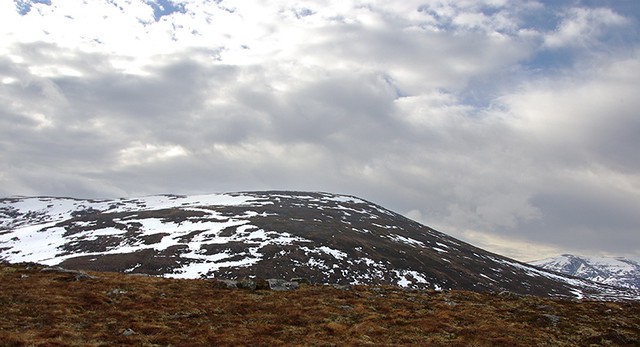 Once onto Meall Daimh we were more aware of the wind.
Bertie using his ears to demonstrate that it's windy ... 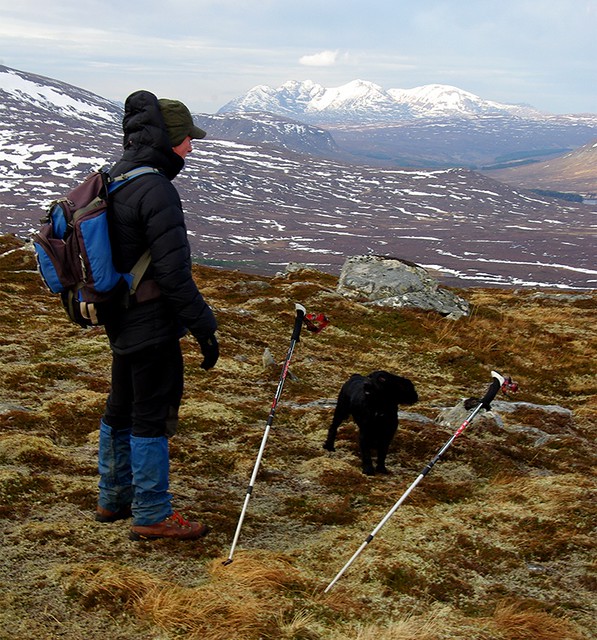 Up to this point we'd had no signs of any wildlife (apart from grouse droppings) but on a snow slick before us we spotted tracks – not other walkers that we could see – no they were deer tracks, Roger followed the deer. 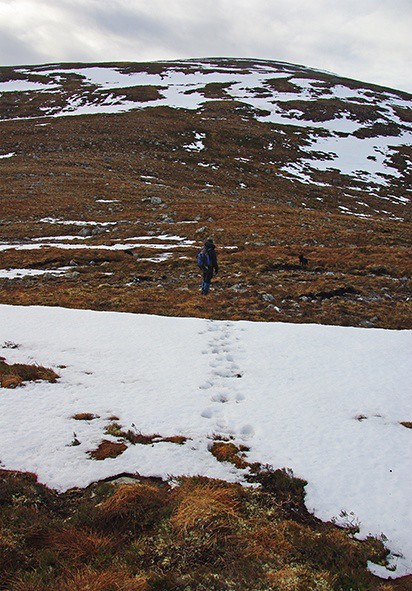 A short while later we saw the only live wildlife of the day – a mountain hare, which Bertie tried to encourage to stay and play – the hare was far too clever for that

More shots north and east as the views opened up 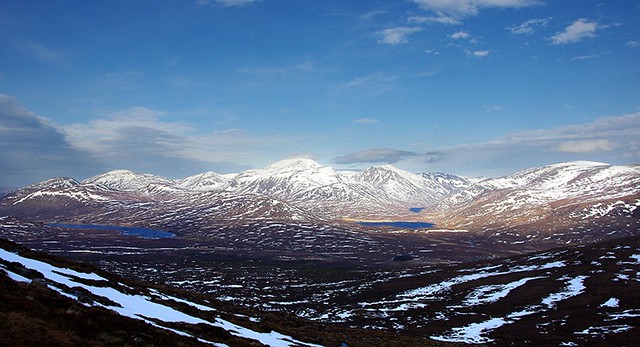 Then on to the summit. Two things struck us with force – the stunning views of the eastern Fannaichs, and the full strength of the southerly wind. It took several goes to hold the camera steady enough in the wind to get this shot of Roger sheltering with the Fannaichs behind him. 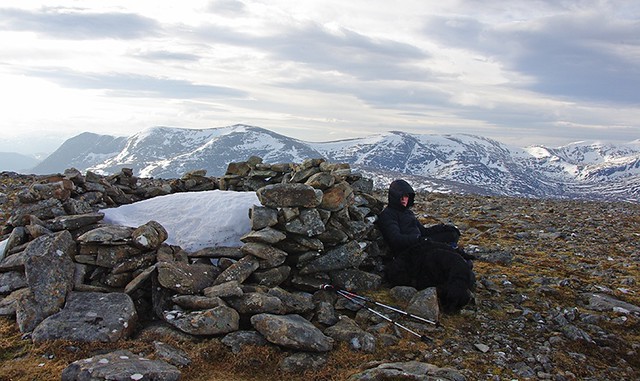 Cowering away from the wind 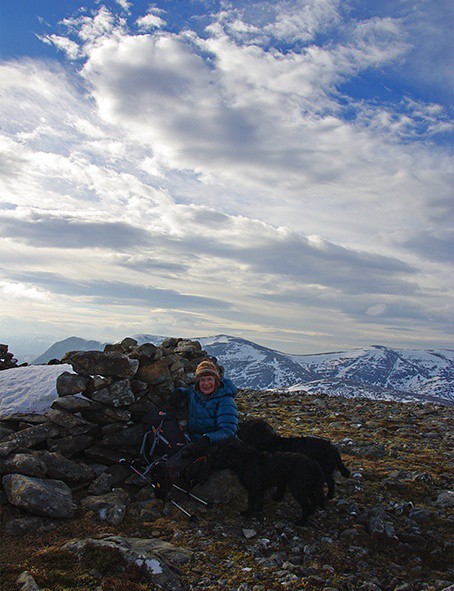 (Thanks to WebTogs for the new backpack - a great improvement weight-wise on my old one, which was good for the back.)

The wall of the shelter gave enough protection to have lunch facing the Beinn Dearg group with Seana Bhraigh away in the background.

Over to the east we got a good look at the Easter Ross Corbetts, with Carn Chuinneag on the right. 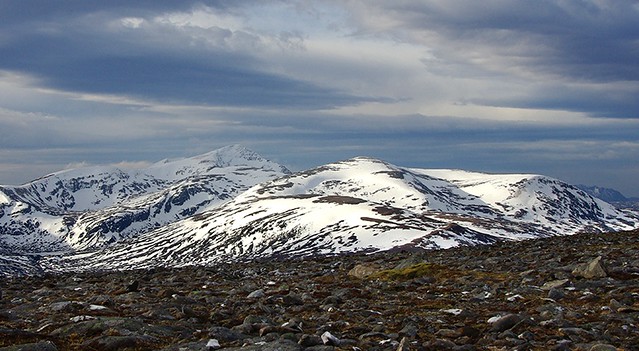 The view south to the Strath Connon Corbetts and beyond 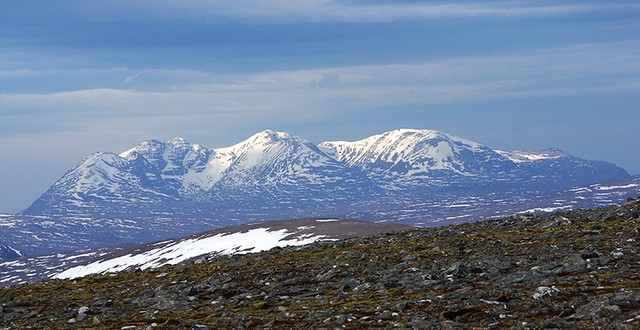 we headed off – given the wind we decided not to head west along the ridge, or even back the way we'd come, instead we dropped of the hill and headed for the fence around the new plantation.
Looking back at Beinn Liath Mhor a'Ghiubhais Li near the plantation fence. 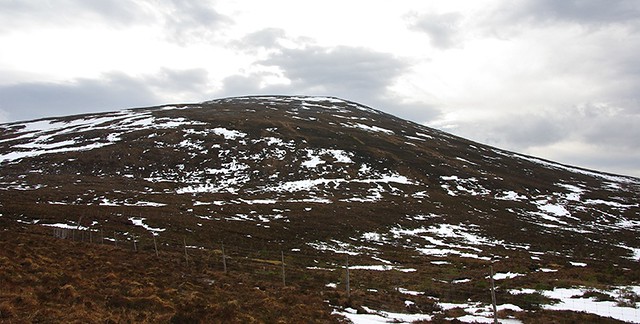 and we did get out of the wind. The steep bit didn't last long then we were back in sight of the road, and heading back to the makeshift gate in the fence around the plantation.

Just before reaching the gate there was lots of hair on the heather – neatly cut deer hair. Then a couple of metres away a dead deer. We were too concerned to make sure the dogs didn't decide to take a free lunch to investigate, but we'd passed through the gate only 3 hrs earlier and neither we nor the dogs had noticed it. Deer stalking on a Sunday in February?? Awfully close to the road for a bit of speculative hunting?? Whatever had cut the hair had been sharp and cut straight – not done by teeth or claws.

By the time we'd got back to the car the wind had dropped and both the Met Office and yo.nr had got their forecasts right too.

On reflection I can recommend this hill for its views and sense of space, a very effective pick-me-up, and of course another blue balloon.

Nice photos over to the Deargs and Fannichs, glad your back is better, returning to full fitness just as the season starts

Was looking forward to seeing this and it looks better than it sounds. Good it was firmer going with the frost - M and I must do it soon! Glad the back held up.

What type of rucksack did you get ?

I always feel sentimental about this one, it was my very first Corbett and my first winter climb as well

It seems it's still as boggy as I remember...

Great hill for a comeback and a cracking viewpoint, too!

Thanks for the comments everyone. I'm on the look out for more easy 'back strengthening trips' - so open to suggestions

MT - the back is a Lowe Alpine AirZone Quest 27 - very neat and light, I hadn't realised how heavy my old one was - I thought it was just that I took too much stuff with me

Great views of the hills around. Glad to hear you're recovering.

Nice one. This is a good wee hill (albeit one with an unfeasibly long name), just right for occasions such as this. And a brilliant location as well with great views to some iconic peas of the NW Highlands.