Camping it up on Creag nan Gabhar

Camping it up on Creag nan Gabhar

This was done overnight Monday 24th to Tuesday 25th May with a high camp near the summit cairn.

I was leading a Bronze Duke of Edinburgh assessment group from Linn of Quoich up into Glen Derry on the Tuesday morning and decided to head north after work on the Monday and get a hill and an overnight high camp in. I fancied Creag nan Gabhar as depending on how the timings went, I could potentially fit in a circuit of Loch Callater as well and it only left me a short drive down Glen Clunie to Braemar and round the loop via the Linn of Dee in the morning.

I was later away from Perth than expected, having somewhat neglected to remember that there was a whole staff meeting scheduled for the end of the school day on Monday. I was also scandalously disorganised for the two day D of E expedition to come, so by the time I had got home, collected all my gear and the dog, and stopped off at both the little Tesco in Scone and the Scotmid in Coupar Angus for supplies, it was 7.30 before I was leaving the parking area by the bridge at Auchallater. Sron Dubh from the car park

The lowering sun was casting long shadows and a warm lookng light bathed the ground but the distinct nip of the last few days was still in the air and I needed my gloves on and my gilet zipped tight up under my chin. Gate just beyond the car park 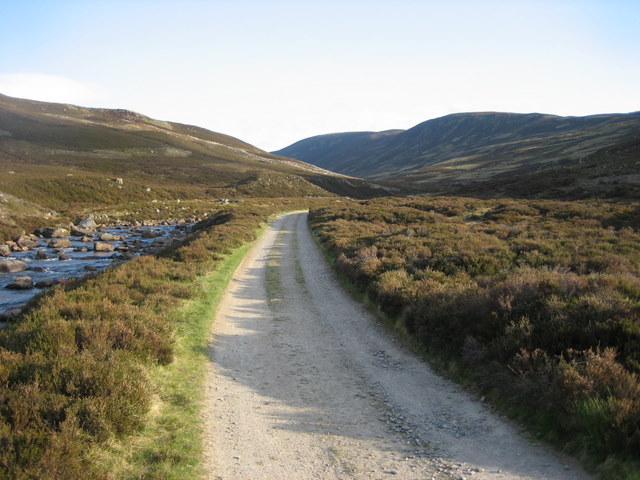 At the sharp bend in the track, Sron nan Gabhar ridge to the right About 800 or so metres after the track takes a sharp right into Glen Callater, a much rougher track cuts off to the right and starts to weave it's way up onto the ridge behind the crags of Sron Dubh, with views soon opening up across to Morrone to the west, down Glen Clunie towards Braemar to the north and south east down into Glen Callater. The route ahead along the ridge over Sron nan Gabhar also stretches out before us. North down Glen Clunie to Braemar Down Glen Callater to Tolmount (L) and Carn an Tuirc (R) 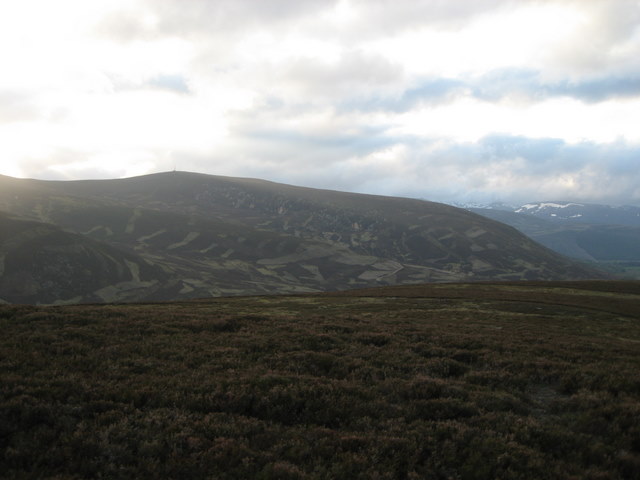 We continue south along the broad ridge with the temperature dropping and the shadows lengthening, descending slightly to a broad shoulder above the Coire an Laoigh. North back along the ridge I decide to press on the the Corbett summit before finding a place to pitch the tent and cook dinner. As we approach the final little pull up onto the plateau the views south open up down to the Glenshee hills. Carn an Tuirc and Glas Maol I quickly found a decent flat patch of grass amidst the rocks and pitched the tent before cracking open a beer and cooking dinner. From the look of the sky, we were in for a chilly night so it was soon into the sleeping bag and off to sleep. Camping under the moon

I awoke just before 5am having spent a remarkably good night of fairly sound, warm sleep, but to find a light dusting of snow covering the tent. I quickly dressed and with Lucy in tow, headed out to take some quick sunrise shots before heading south west to the end of the ridge where Creag nan Gabhar ends in steep crags above the little clump of forestry at Baddoch. Sun rising in the east #1 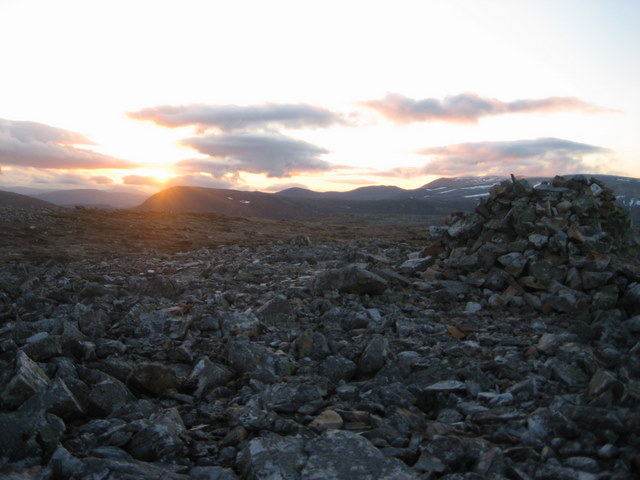 Sun rising in the east #2 Morning sun on the cairn, looking south to Glenshee Munros Then it was back to pack up and shake the snow dusting from the tent before heading off at 6.20 down the heathery slopes to the Bealach Buidhe to pick up the landrover track that curves north into Glen Callater. I decided to give the full circuit of Loch Callater a miss today and head back to the car (maybe just as well, cos when I got there about 8.15 a bloke in a little digger was digging a trench across the exit, with just about enough space left for a car to squeeze out!)

The walk back was certainly spiced up by the problematic river crossing at 167853 - I must have spent a good 20 minutes of checking for a suitable place before finally deciding there was nothing else for it but to choose the narrowest, shallowest, least fast flowing spot I could find, take a deep breath, plant my best foot firmly forward and go for it. I suppose I could have just kept left of the river and picked the track up beyond the bridge but I had had enough heather whacking for one morning and just wanted the solidity of the track for the last few kilometres. 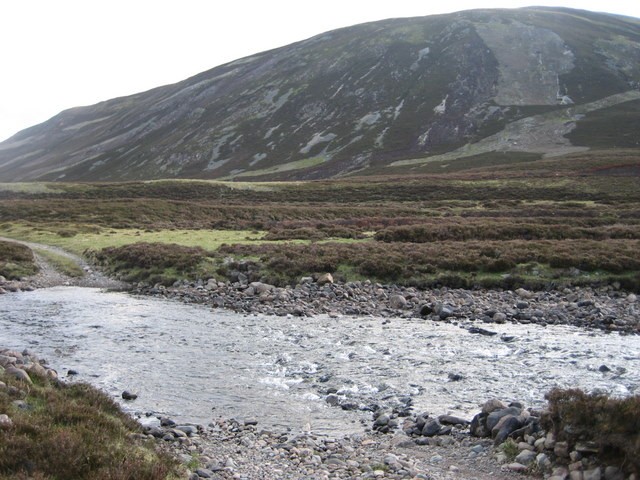 A much more civilised means of crossing a river

The 2 photos with your shadow in them are brilliant.

Nice one G. Glad to see you got some nice weather for the overnighter. I love Glen Callater - don't recall any issues with the burn when I did it last summer - must be the global warming....