Scandale - and the return of the sweaty season

Scandale - and the return of the sweaty season


Scandale – and the return of the sweaty season

The question of the day was what would run out first – my energy, my water or my factor 25? The previous week ice had been scraped off the car and shaken from the flysheet: this week the temperature took a lurch upwards and suddenly shorts were the order of the day.

The need to be in Bo’ness for Saturday morning meant a clear day on Friday and the chance to acquaint myself with half a dozen Wainwrights I’d not visited before. The western arm of the Fairfield Horseshoe had been frequently visited, but never the east. So, the tour of Scandale beckoned.

I quickly, if painfully, adjusted to the £6 parking fee and crowds of Ambleside. Then, in my haste to get away up the hill, and on getting above Low Sweden Bridge towards Low and High Pikes, realised I’d forgotten my camera. Still, some spotty youth in a phone shop had previously introduced me to the delights of the Bluetooth dongle, so the camera on the phone would have to suffice. That’s my excuse for the dodgy photos this time.

The constant companionship of the wall up the spine of the ridge means that views can be a bit restricted, but there are plenty of places to swap from one side to the other to add a little variety. AW likens the view up the ridge to that of the north ridge of Everest. I can only conclude that he must have had some whacky baccy in his pipe that day – otherwise he’d have also described the little scramble half way up Low Pike as the Hilary Step. 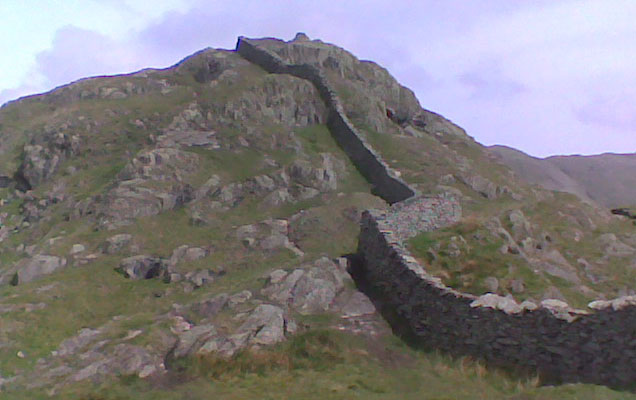 Anyway, Dove Crag was reached within a couple of sauntering hours and the chance to turn right and leave the crowds behind was welcome. Once over the little double humps of Little Hart Crag I had the bizarre experience of climbing down to my next unvisited Wainwright, then back up again afterwards. High Hartsop Dodd was an idyllic and solitary little spot from where I could watch the bristles moving across the skyline over to the west. The short climb back up and over Little Hart Crag was far preferable to the direct slog straight up from Hartsop and Brothers Water, and the saving in effort made the view down the valley and over to Angletarn Pikes and Place Fell all the more rewarding. 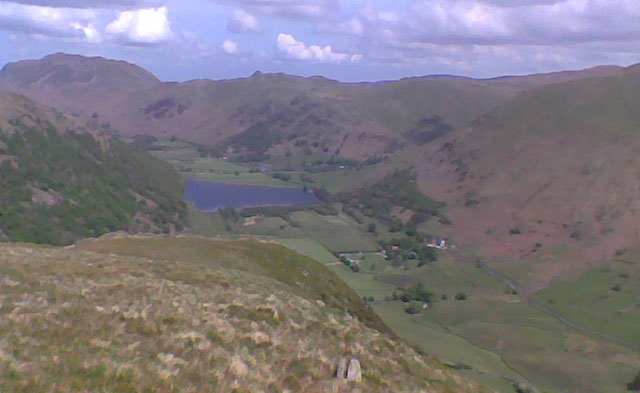 A rising traverse from the Scandale Pass over to Middle Dodd then meant I didn’t have to ascend Red Screes twice to capture another unvisited off-shoot. Again, a soft grassy top could be enjoyed alone for a while, until a trio from the RAF decided to do two laps of the Lake District in the time it took me to get to the trig point on Red Screes. Here I was on familiar ground, or as familiar as it can be after some forty years: Red Screes was the first Lakeland hill I climbed on my own as a very young teenager. But this Yorkshireman had more pressing things on his mind than emotive reminiscences. I had an hour and fifteen minutes before my parking ticket expired. The final half mile or so on the road back down into Ambleside were the worst part of the day, but with six minutes to spare the spectre of penalty charges faded, leaving just the recollection of another enjoyable horseshoe route, and the prospect of summer to come.

Re: Scandale - and the return of the sweaty season

Aye and what a bloody price that carpark in Ambleside is!! Richard and I spent the whole walk we did from there a couple of years ago exclaiming "6 quid??!!" in outraged voices to each other all the way round! We were lucky in getting back a few hours early (think we were only doing the round of Wansfell/Troutbeck) and selling our ticket of for a couple of quid...

But I had a similar walk when I first did Birks, St. Sunday Crag and the Grisedale Valley from Glenridding once - I had 4 hours to get round and ended up running the last few miles over Keldas - and I'm no runner!

Great to see those photos anyway as I haven't managed to get to that area for years now and it's one of my favourites - I particularly like High Hartop Dodd, Red Screes & Middle Dodd and am missing them like mad, so thanks for that