I had walked out from my overnight camp high on Creag nan Gabhar and driven on to Braemar, stopping at the little Alldays store to buy a couple of jam pastries before continuing round via the Linn of Dee to the parking area at the Linn of Quoich. I had at least an hour until the bus turned up with the Duke of Edinburgh groups and the other staff and it was a pleasant Tuesday morning, so I got some water on to boil and settled down for a cup of coffee and my pastries. Bridge at the Linn of Quoich

As I waited, a steady stream of cars turned up and walkers piled out and got suited and booted. Some said they were just going for a leisurely stroll a short way up Glen Quoich and back, others had loftier ambitions, including three guys heading off for Beinn a'Bhuird. Lucky them - here was me off on the well known Bronze Assessment route up to Glen Derry via the Clais Fhearnaig for the umpteenth time. I really fancied a quick dash up Carn na Drochaide, and had studied the route options. I would set off well ahead of the rest, and take the track a short distance up the north-east side of the Quoich before making a bee line up and over the shoulder of Carn Dearg and onto the summit of Carn na Drochaide. The walkhighlands route advises continuing along the valley of the river Dee towards Allanmore and picking up an ascent path that climbs to the west of Creag a' Chleirich. I knew this might be easier going but didn't want to go that far "off piste" so to speak. Instead I thought I'd just take a direct line to the summit before bearing north west over Carn na Criche and then west over Carn Elrig Mor to pick up the track that follows the Quoich Water round in a bend through the plantation.

When the bus turned up, we were awash with Leaders and Tony, who was technically in overall charge, said that he was quite happy for some of us to take more circuitous routes. We agreed that my route would help mop up any group who missed the Clais Fhearnaig turn and ended up heading towards Beinn a' Bhuird or even Ben Avon (it's been done before!). And so I set off at a cracking pace to get a good head start. Quoich Water with slopes of Carn na Drochaide in background Quoich Water from the bridge just below the Punch Bowl Morrone from the track before the heather whack 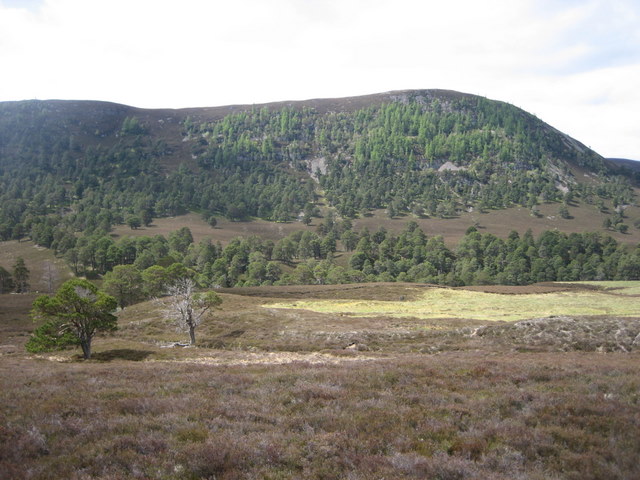 Well, this might have been the most direct line of assault, but I would certainly not recommend it to anyone else. The views might have been decent enough but it was a real Eastenders character of an ascent - a real Heather Trot! Approaching one of the bumps of Carn Dearg Lochnagar and neighbouring hills from just below the summit

Once over the twin bumps of Carn Dearg, the heather at least became short and scubby, and there was even a track heading down over Carn na Criche, but then we were back into the knee deep heather again until we emerged onto the track just before the bend, by which point I was beginning to feel the effects of my early rise on Creag nan Gabhar. This was when I realised that I had been very sloppy and hasty in my route planning and had made an unforgivable schoolboy error! I had simply taken a cursory glance at the map and somehow assumed that there was a bridge across the Quoich Water at 092952! What an assumption to make - and indeed, there weren't no bridge!

I knew that I'd be able to cross the Allt an Dubh-ghlinne about 1km north of the Clais Fhearnaig junction, having made this crossing about the same time of year previously, but crossing the Quoich was another matter. It even made my exploits crossing the Callater Burn earlier that day look quite tame by comparison. I had opted to leave my poles in the car, but even if I'd had them for some support, this looked like an impossible, even suicidal task. I walked upstream for ages, losing track of distance covered, trying several times to spy a possible way across, but it was just too wide and deep and far too fast flowing. I tried a couple of times and managed to get to some rocks protruding from shallow water about half way across before being forced into retreat. Eventually I came across an old fallen tree which completely bridged the river, but after climbing onto it, I decided that even that was too dodgy with the weight of my big pack on my back. I ventured further upstream before concluding that it was either across the tree trunk, or else I faced going back almost to the Linn of Quoich. I very gingerly eased myself onto the well polished trunk and gently edged across, very relieved when I eventually reached the safety of the other side. It was then just a case of trudging wearily back around and over the Allt an Dubh-ghlinne before hauling my aching limbs over the Clais Fhearnaig and up into camp in Glen Derry!

I toyed with the idea of taking another direct line over Meall an Lundain rather than the long way round, but concluded that given the events of the day so far, it was a case of "better the devil you know". At least I knew exactly what I was getting by going over the Clais Fhearnaig. North from summit cairn towards Beinn a'Bhuird and Ben Avon East from summit cairn towards Lochnagar Certainly not a vintage Corbett experience by any means, but it certainly made for a sound night's sleep in Glen Derry for both myself and the dog!

I don't think this will win WOTM. At least it's a tick though!

A good wee area for the 'little chaps' to test out their navigation!
You mentioned the slot of Clais Fhearnaig.....quite a spooky place in the dark on a December night with the light fading fast!! Tiredness after a day out on Bhuird and Avon returning to Derry Lodge, thinking possibly only of dinner, hair up on the back of the neck stuff....the memories of this doesn't fade. Maybe there had been some sort of tribal skirmish in this area?

Or maybe I had just read of an account of something that Frank Smythe had seen relived in the Bealach an Sgairne region. Maybe he was just tired too. Anyway at that time the Lodge, early sixties, was available for clubs to use.....metal army type beds...but a fine old range/stove downstairs.