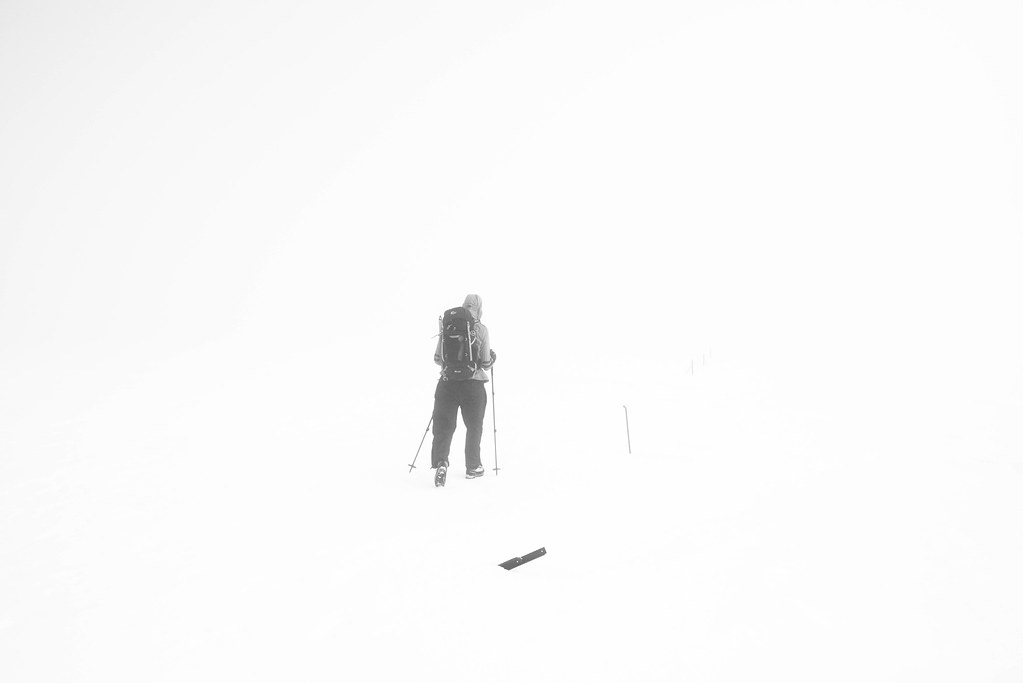 The weather looked lovely from the A9 with blue sky and sun but this wasn’t going to be the story of the day.

once again we left the parked van in a layby on the A9 and set off.

The way up was a snow covered land rover track so it was easier going in the early morning. We reached the plateau in no time where the weather was a white out, wind and clag, so that set the theme for the rest of the day.

The first goal of the day was Carn na Caim to the north of where we came up. it was a mix of walking on bearings and following the remains of a fence line when it was above the snow. Good bit of fun following the disappearing fence line. Lucky for us the snow underfoot was hard and the wind was pretty low.

We made the Carn na Caim without issue and then heading back for the top of the land rover track to start the southern route to A'Bhuidheanach Bheag, this is went the wind picked up and made the day more interesting.

The fence lines mostly disappeared so it was time to some proper nav, after an hour and bit we found the summit of A'Bhuidheanach Bheag and its tig point. However since this summit is 936m and another summit 500m away is also 936m which one is the true munro summit. well since we were there we might as well get in the other one as well.

from the other summit we decided it maybe a better idea to take a different route off as we didnt have to back track along the plateau. So from the other 936m we set a north westerly bearing to take up straight line down out of the clag toward the A9, it was fun to be able to slide down after we were out of the clag.

It didnt take us long to hit the access road for the power line construction along the A9 which we followed until getting back the starting point.

hope you have enjoyed this report.

Well done for finding both summits. I was up there 2 weeks ago and tried to do these 2 as an unplanned Plan B to the Drumochter 4. Sadly I only found the southern summit after some calamitous navigation. The visibility was awful and I ended up giving up. According to previous reports, these 2 appear to have a claggy reputation.

Good effort under those conditions

not the best hills to be caught in a whiteout

I did A'Bhuideanach Bheag as part of a group of six on 13th Feb this year. It was the most difficult navigation I've ever known. There was dense white out all the way along the plateau, the track was completely obliterated by the snow most of the way, fence posts were rare, plus it was windy and cold. So we split into two groups of three and the groups leap frogged all the way on a bearing. We got to within about 50 metres of the trig point and figured we must be near it as the ground had levelled off, but still took several minutes to find it, but it was tremendously satisfying to have made it. We managed to follow our footsteps most of the way back but had to play leap frog again where we lost them. We ran out of time for Carn na Caim.

I had a real navigational challenge up here several years ago in my early days of Munroing. Complete whiteout and really only found the summit of A'BB by complete accident. Not an easy proposition in these conditions.

Thanks for all the comments. I can understand the nav comments, you could get lost up there in a whiteout easily. For me it was great training for my WML assessment.