The fells at the top of Wasdale Head have been described innumerable times, so I don't intend to give any detailed walkreport (not least because on both occasions I did this route, it was either all, or mainly in clag with about 50m visibility or less.

But it's a fine route, and, as Guinnessman's recent report shows ( http://www.walkhighlands.co.uk/Forum/viewtopic.php?f=16&t=49469&p=268886&hilit=pillar#p268886 ), should afford some of the best views in the Lake District; and I haven't seen it described or even outlined anywhere else.

So this is a mini-report to highlight a great and reasonably challenging round.

Coming up Wasdale, it looked reasonable if MWIS was correct in forecasting that it should clear on the tops towards midday. 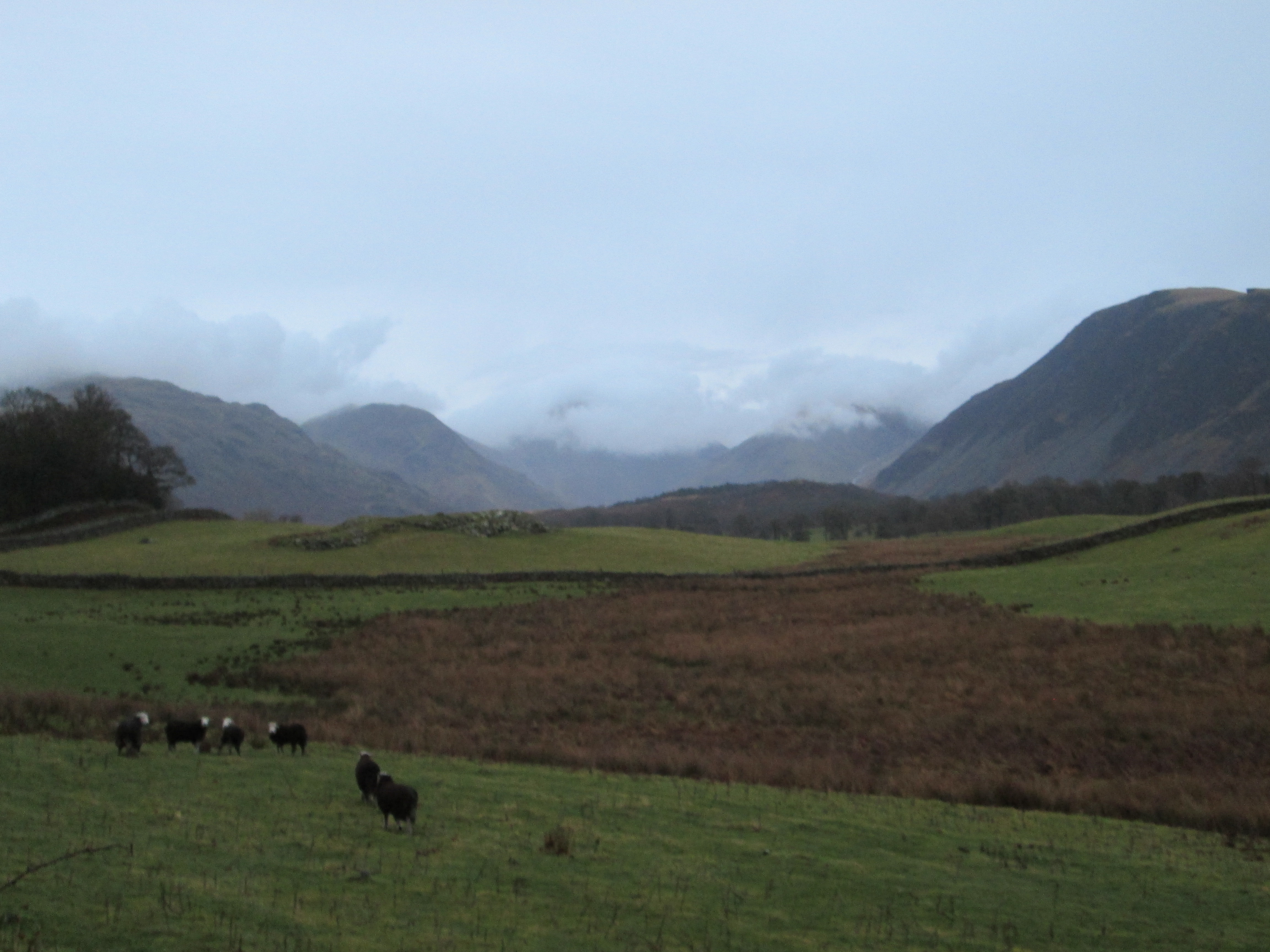 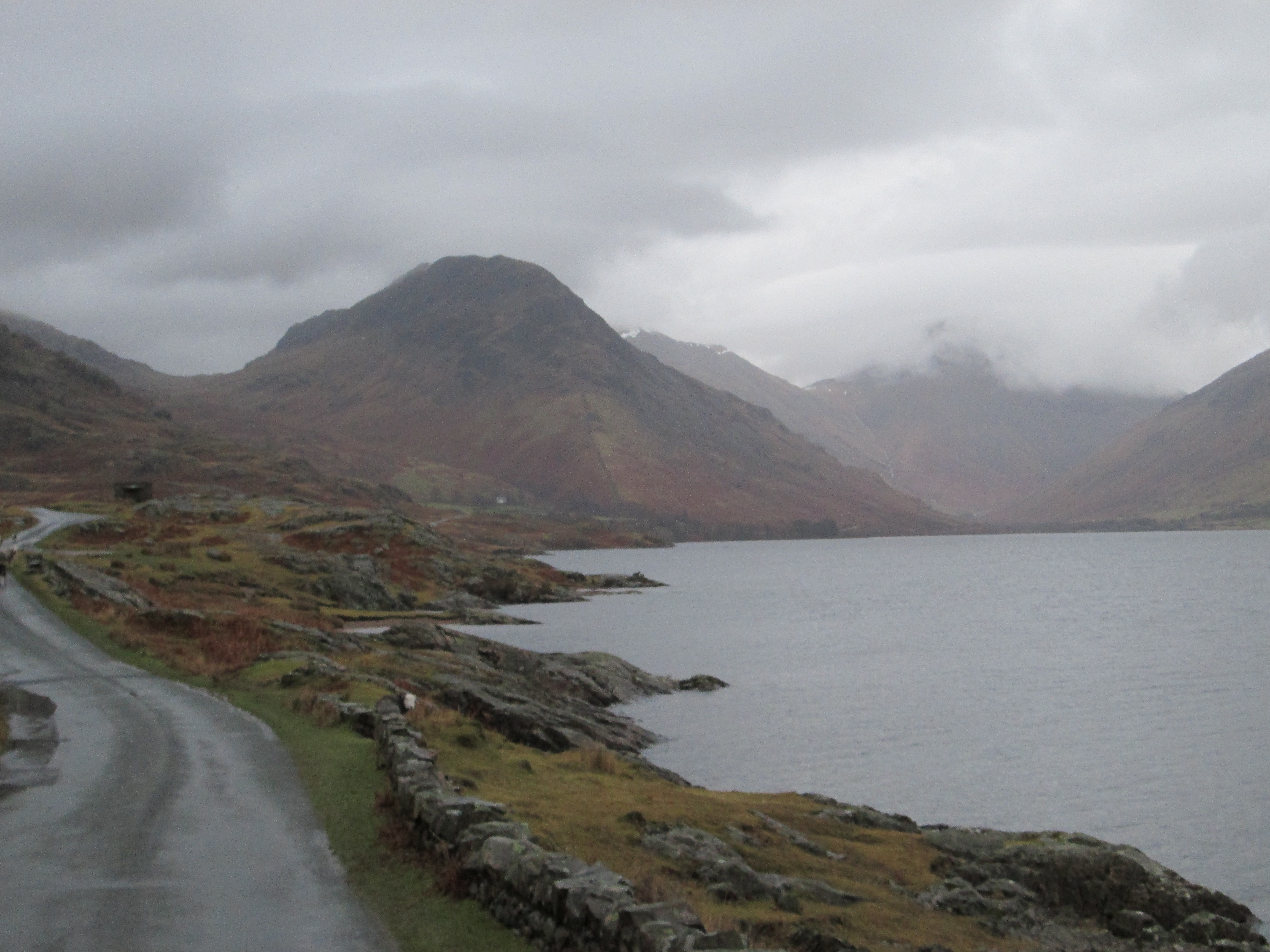 IMG_0888. Looks auspicious: Yewbarrow in the foreground, and the top is more or less clear. Kirk Fell and Great Gable tops in cloud though. 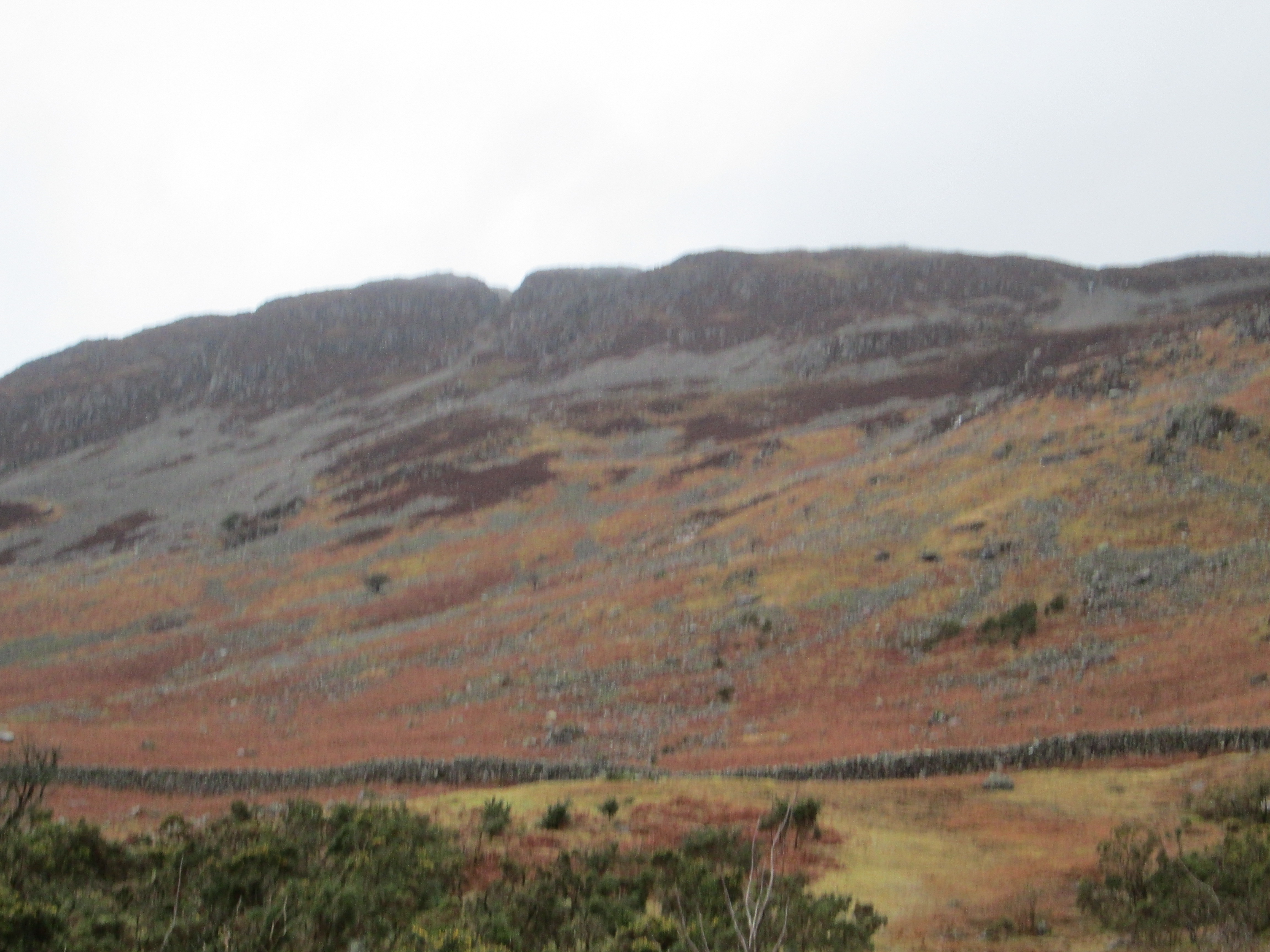 IMG_0889. The start of the ascent of Yewbarrow. If it's going to get clearer during the day, this looks OK... 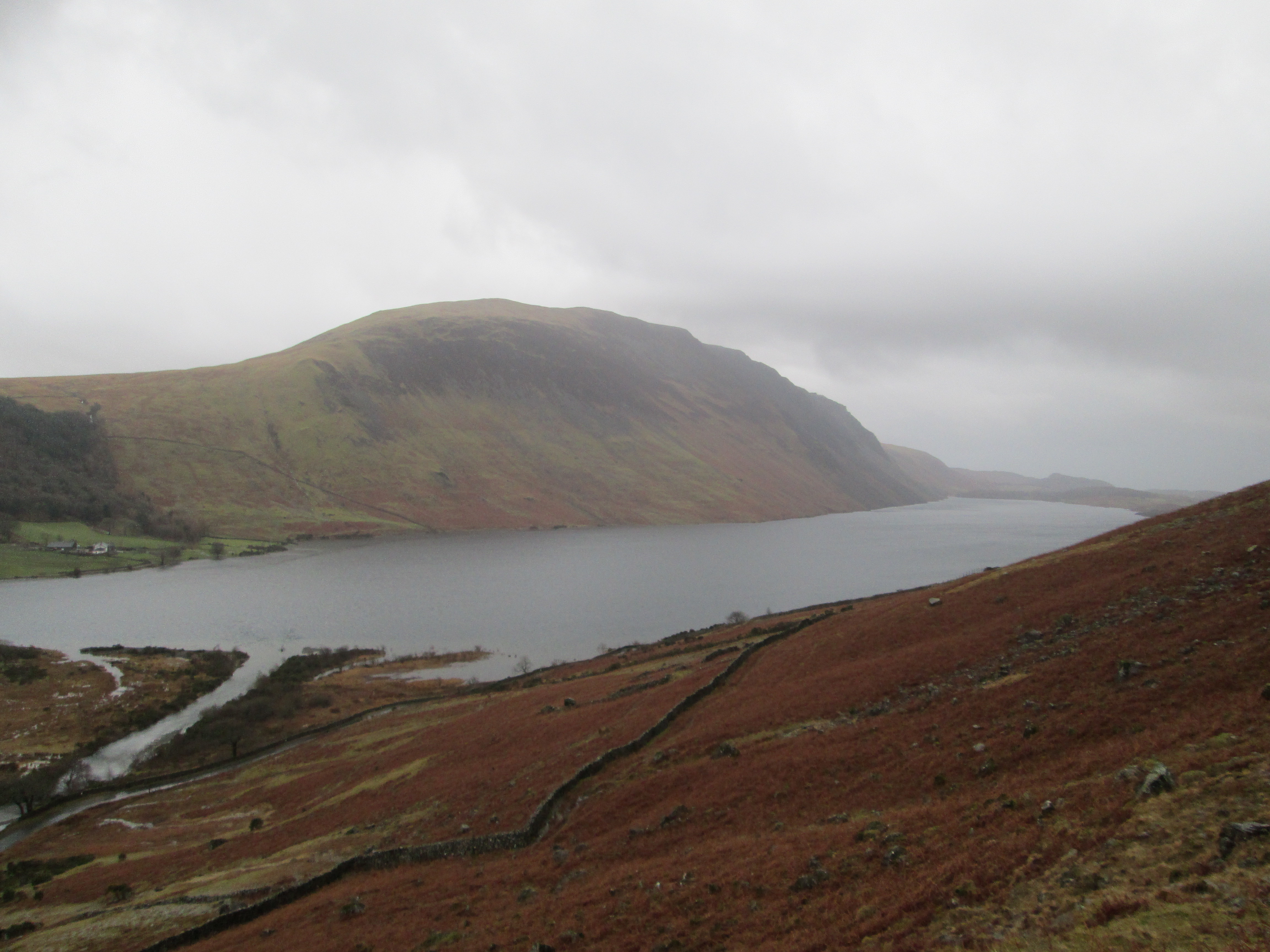 IMG_0890 Looking back to the Wastwater screes from the start of the Yewbarrow slope. It gets steeper. 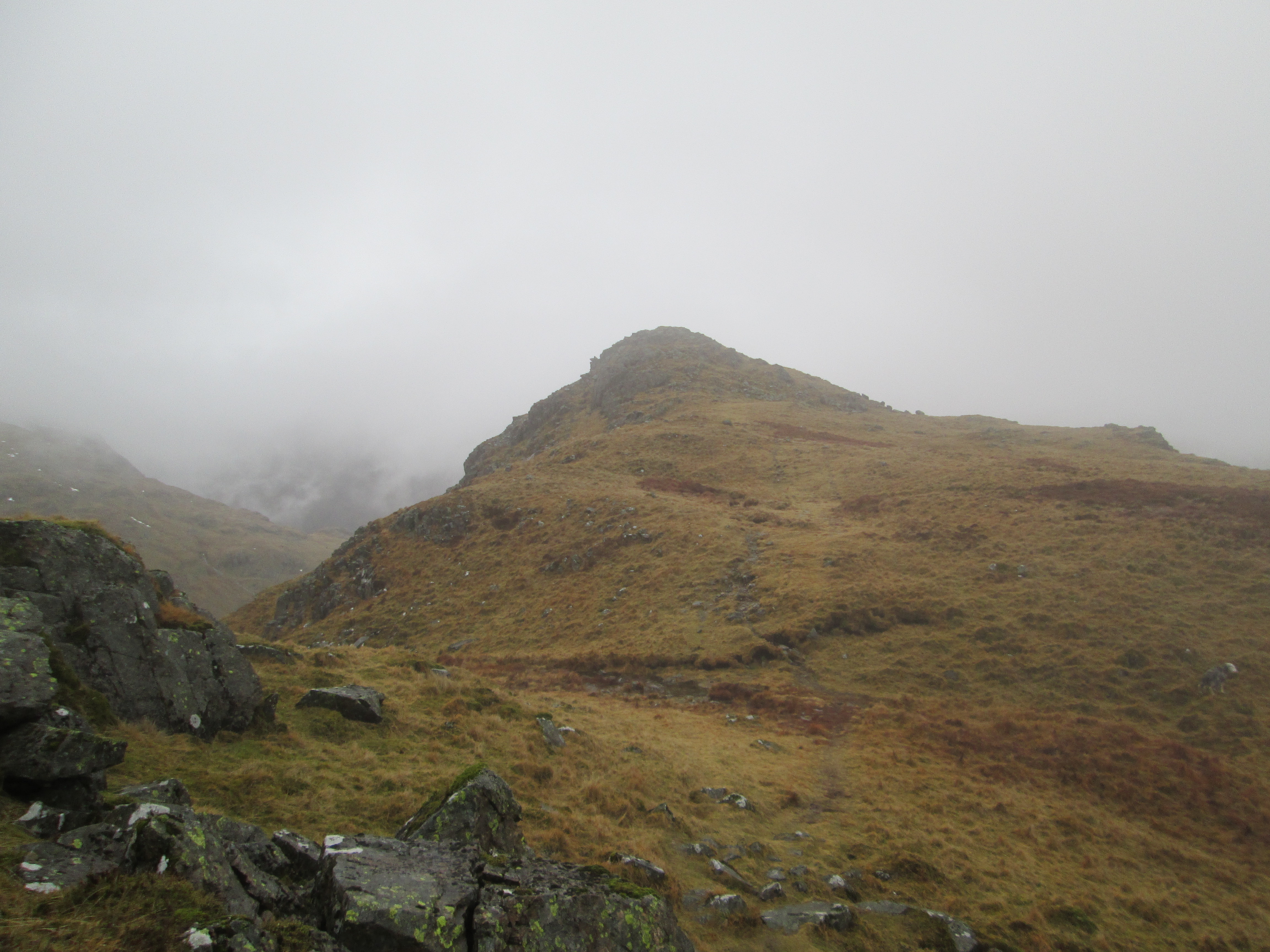 IMG_0891 The top of Yewbarrow. A clear path can be seen: navigation is straightforward, even in mist; anyway, there's only one ridge here! There are some great panoramic views from here when it's not clag-bound! 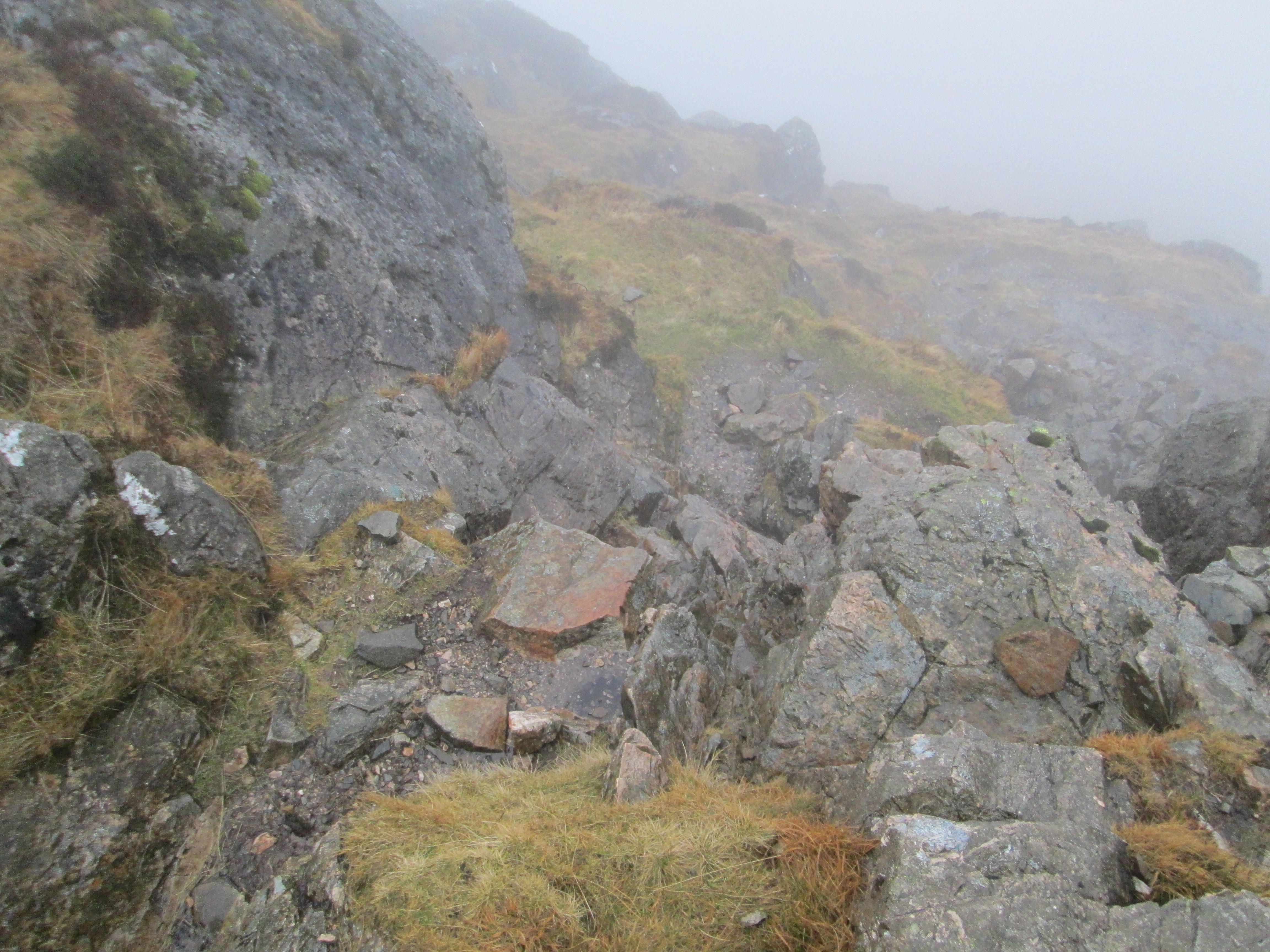 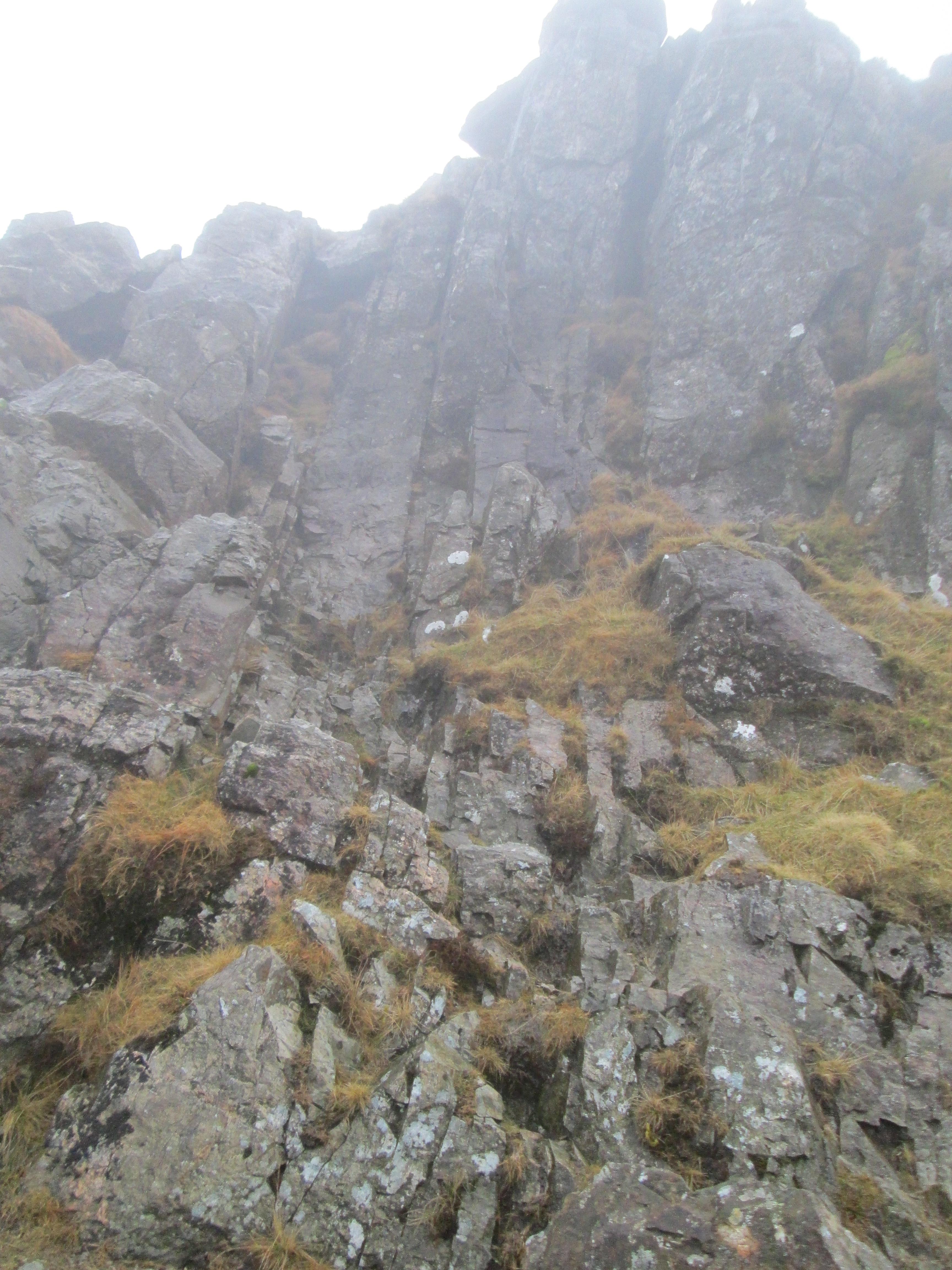 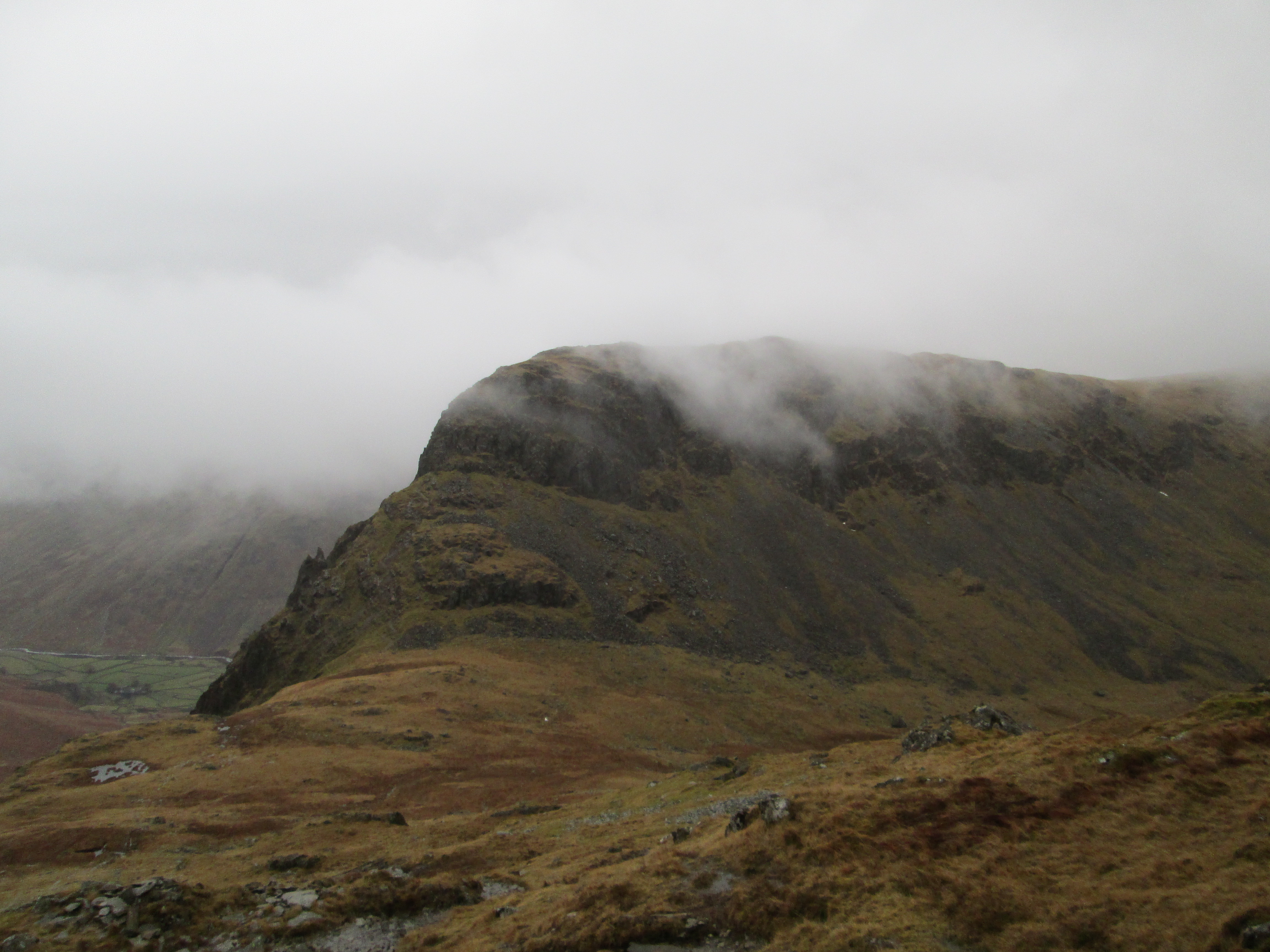 IMG_0903. Looking back on the North side, showing the scramble descent. 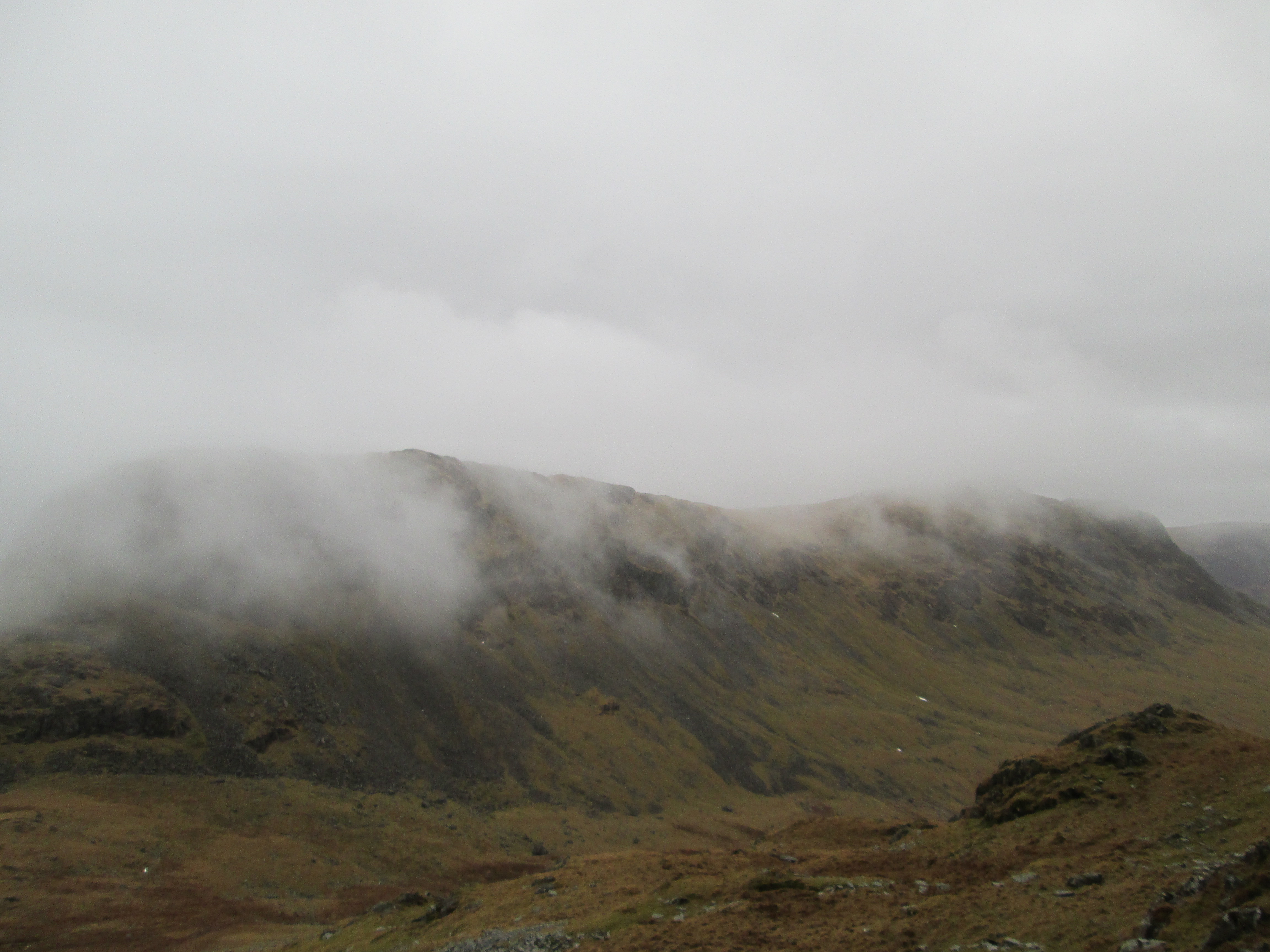 IMG_0900. For a brief moment the wind clears the cloud, and just about the whole of Yewbarrow is visible from the ascent to Red Pike.

Then a long period in cloud, taking in Great Scoat Fell and the Pillar. The path is reasonable straightforward. Navigation on Scoat Fell requires real concentration in clag, because the change in direction on the top is quite small: you need to trust the compass implicitly.

The ascent of the Pillar is clag-bound also, but, notwithstanding all the dramatic pictures, pretty straightforward - not even a scamble really. But again a bit of care wayfinding is necessary on the top to be sure of heading in the right direction. Then down towards Looking Stead. 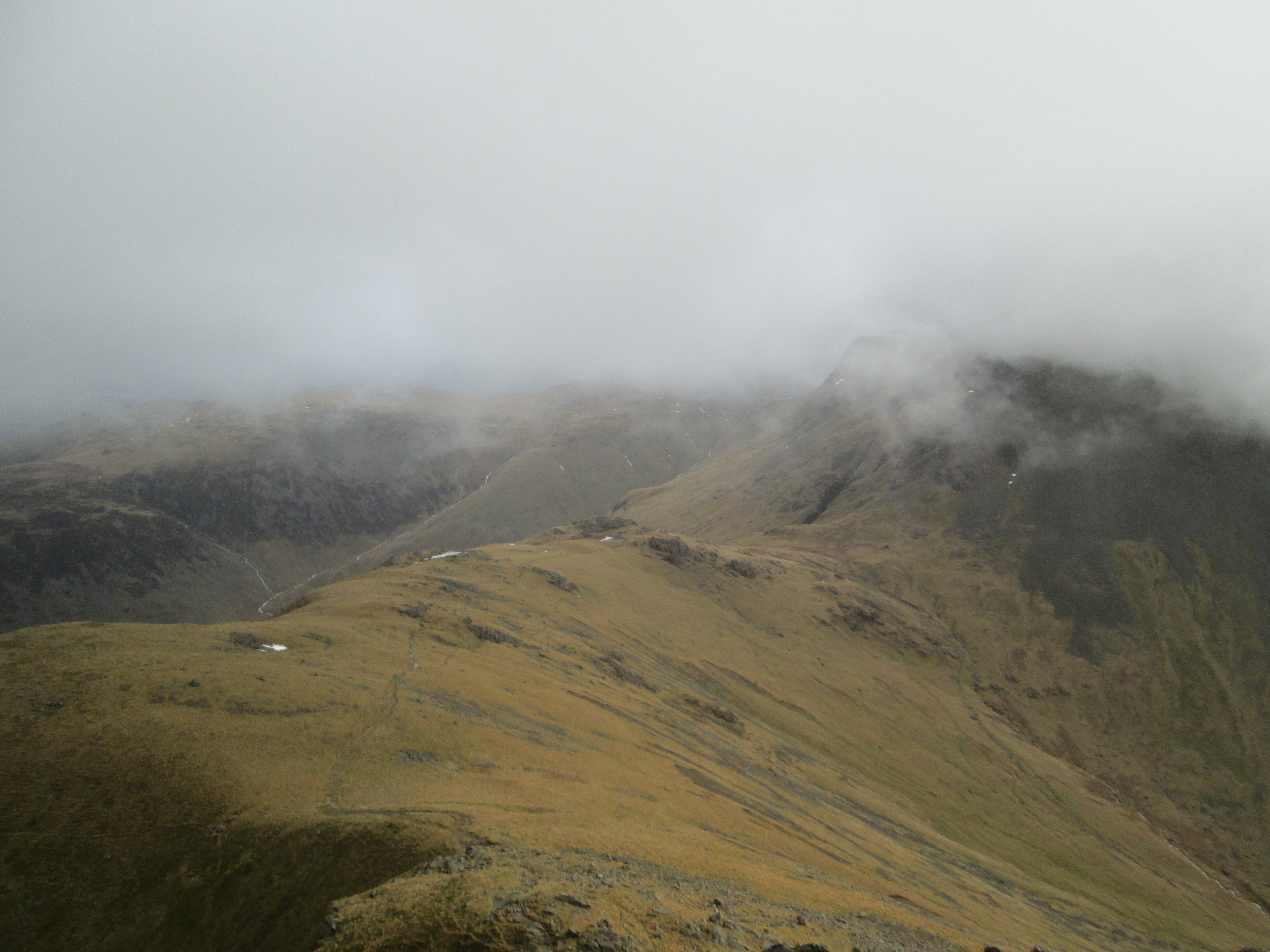 IMG_0912. A short break in the cloud begins to show Kirk Fell Crags ahead. 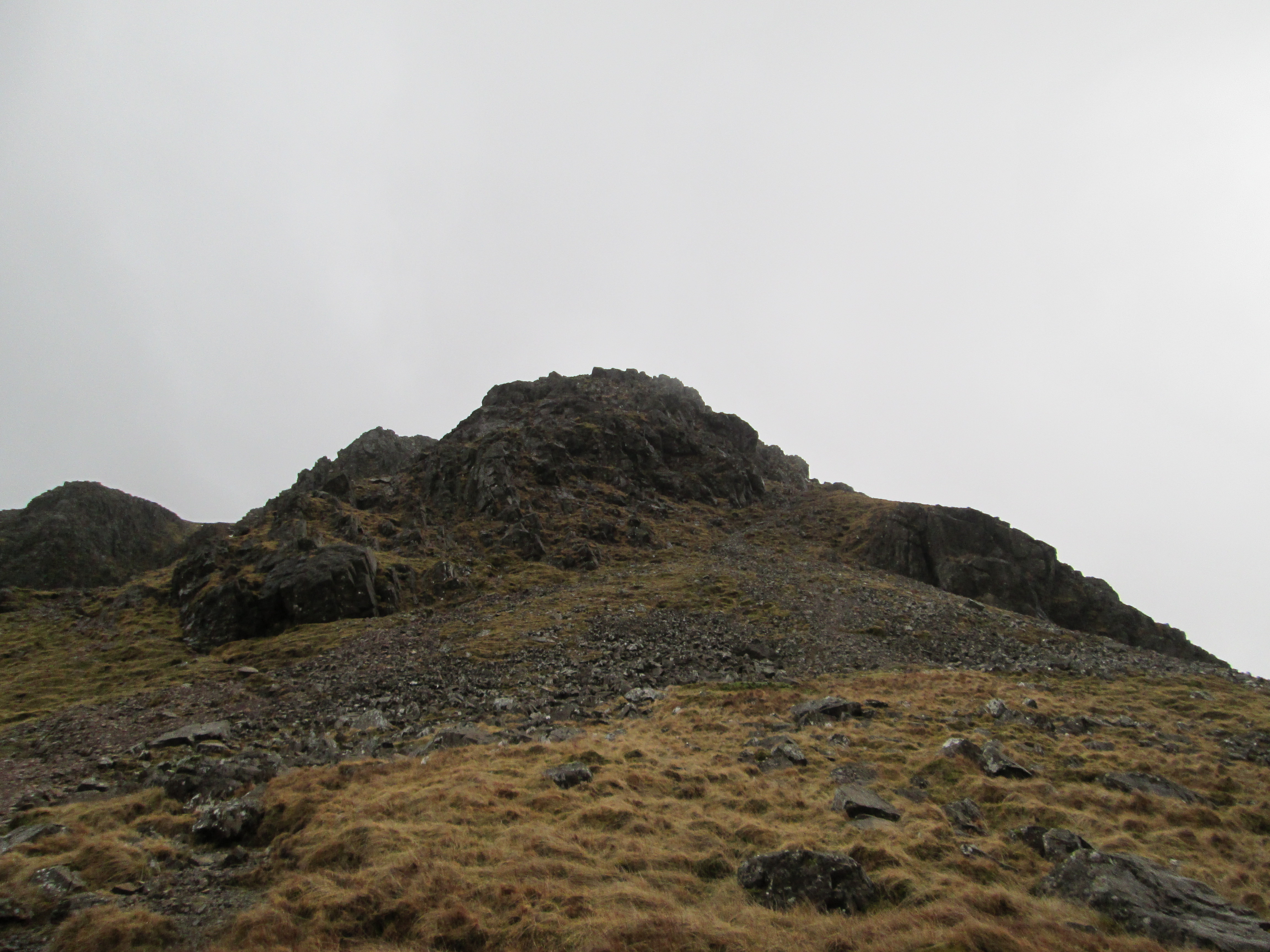 IMG_0918. The crags look a bit intimidating, but aren't in reality. I did this bit the last time in 20m visibility, and all that was necessary was attention to the compass, and a bit of traversing around obvious rock faces.

I'm now hopeful that the cloud will clear, as promised, and I'll get to see the famous views.... 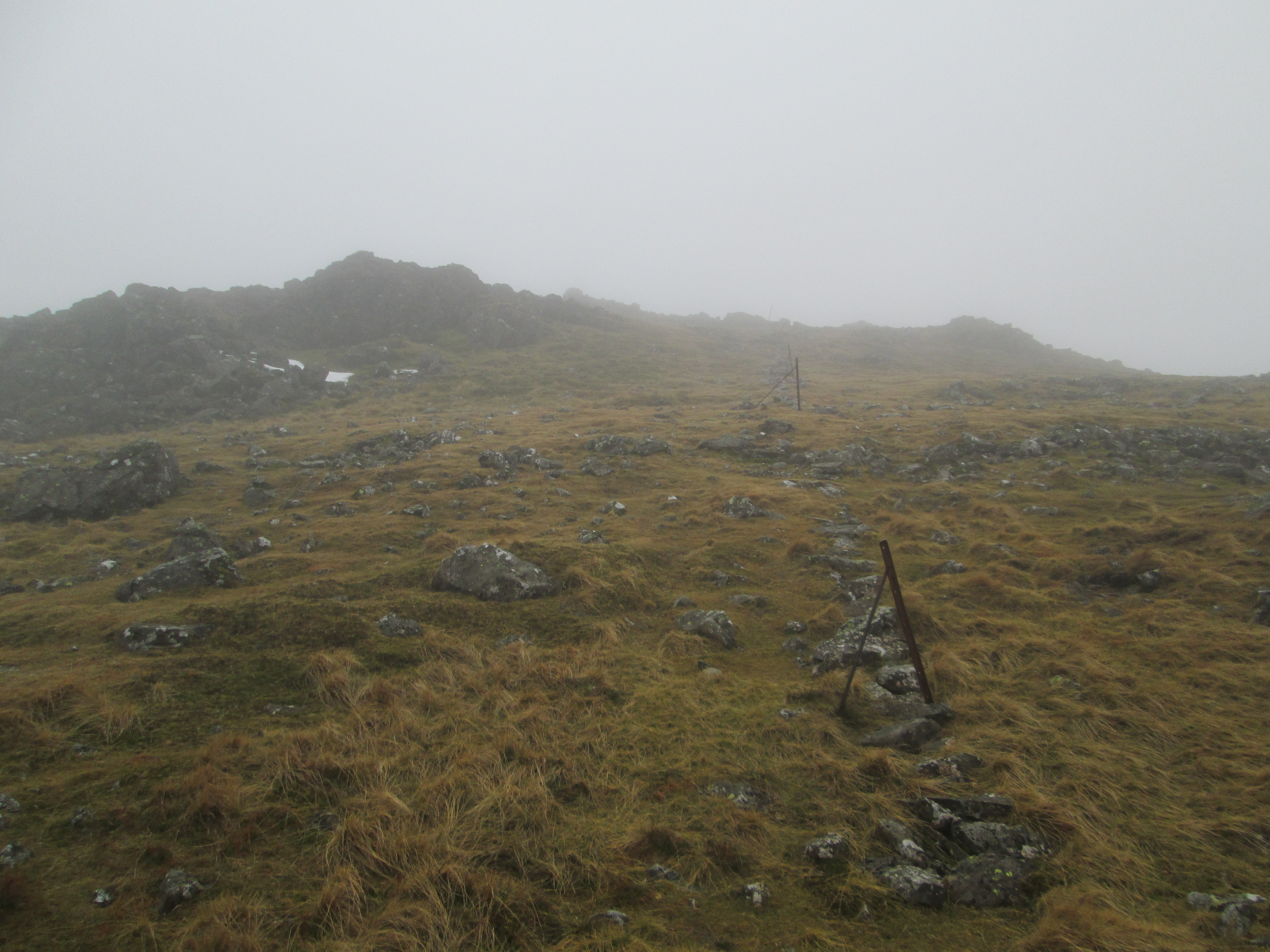 IMG_0919. No such luck. But the fence posts here mean that the route is clear; and a bit of careful compass work on the summit means it's reasonably straightforward getting to the base of Great Gable.

The best ascent of Great Gable is to keep to the left and go up Beck Head first: straight up GG - which I did once - was an energy sapping scramble up a loose large rock scree face. 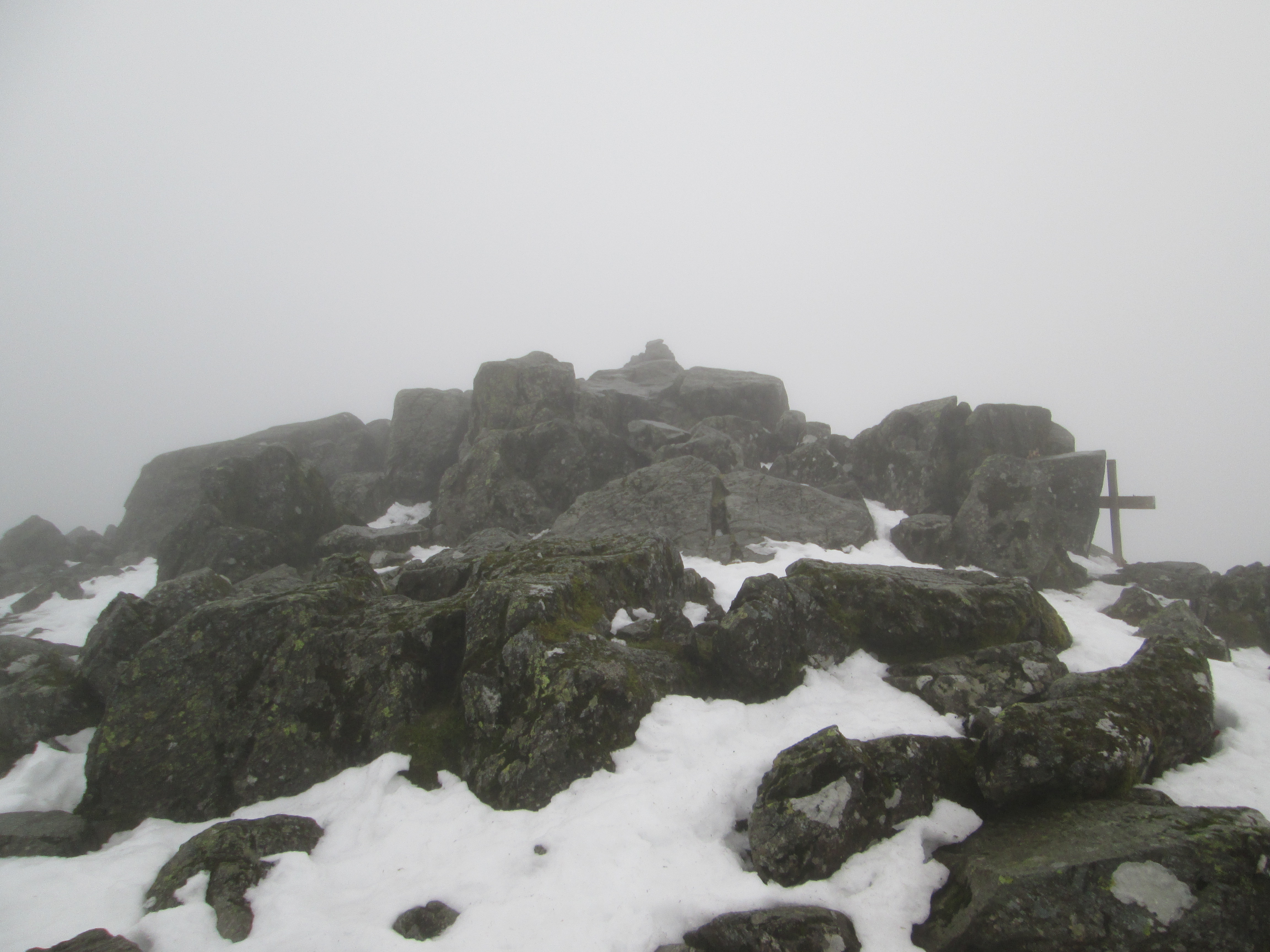 IMG_0920. Sadly, yet another clag-bound summit

. Great Gable if I remember correctly - I'm not sure: I've only ever seen it in mist. 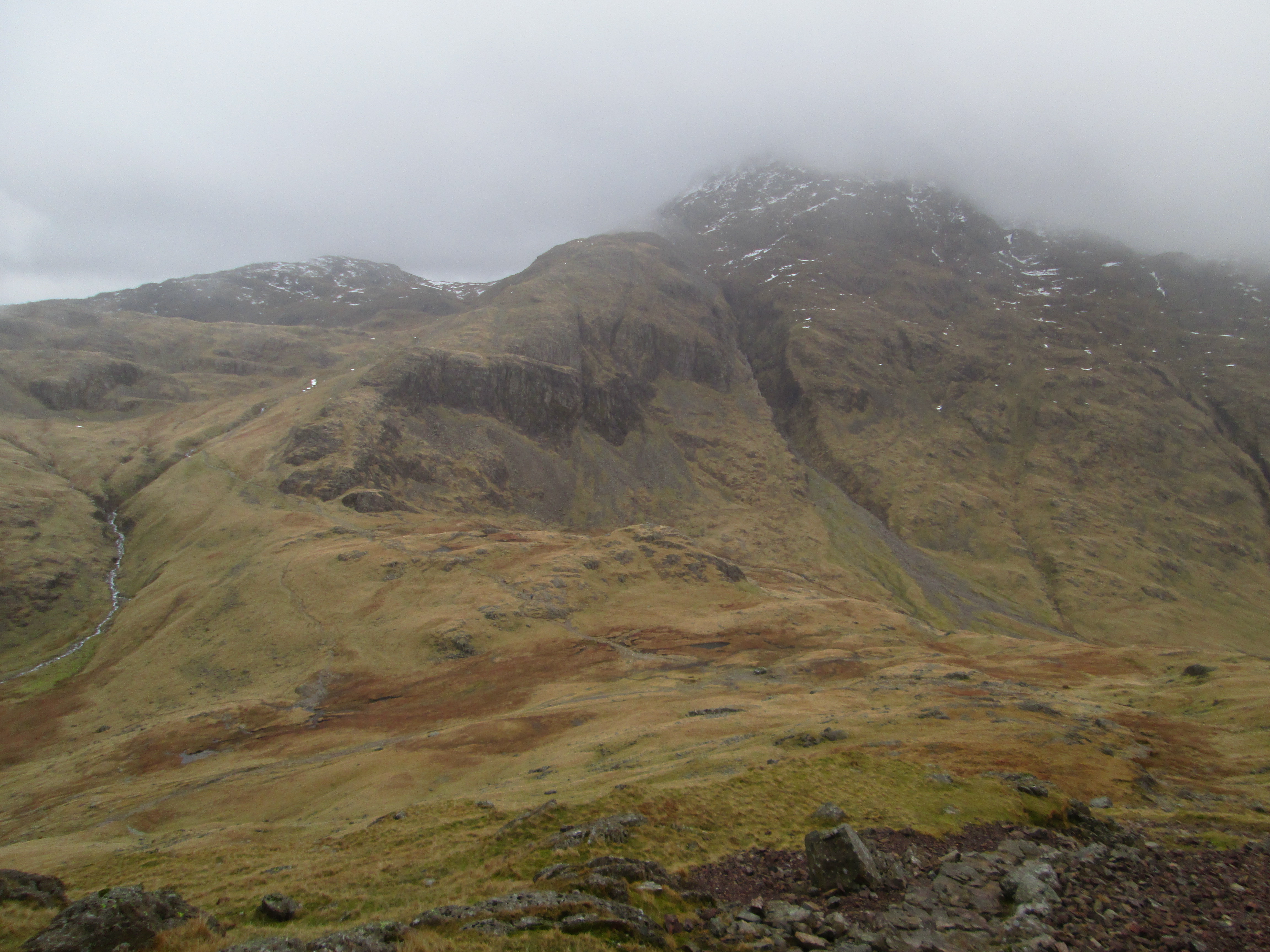 IMG_0921. Both the paths down from GG are pretty easy to see. I take the Northernmost one to get out of the wind a bit - it's quite fierce now, and keeps unbalancing me. This view is looking towards Styhead during a short break in the could. 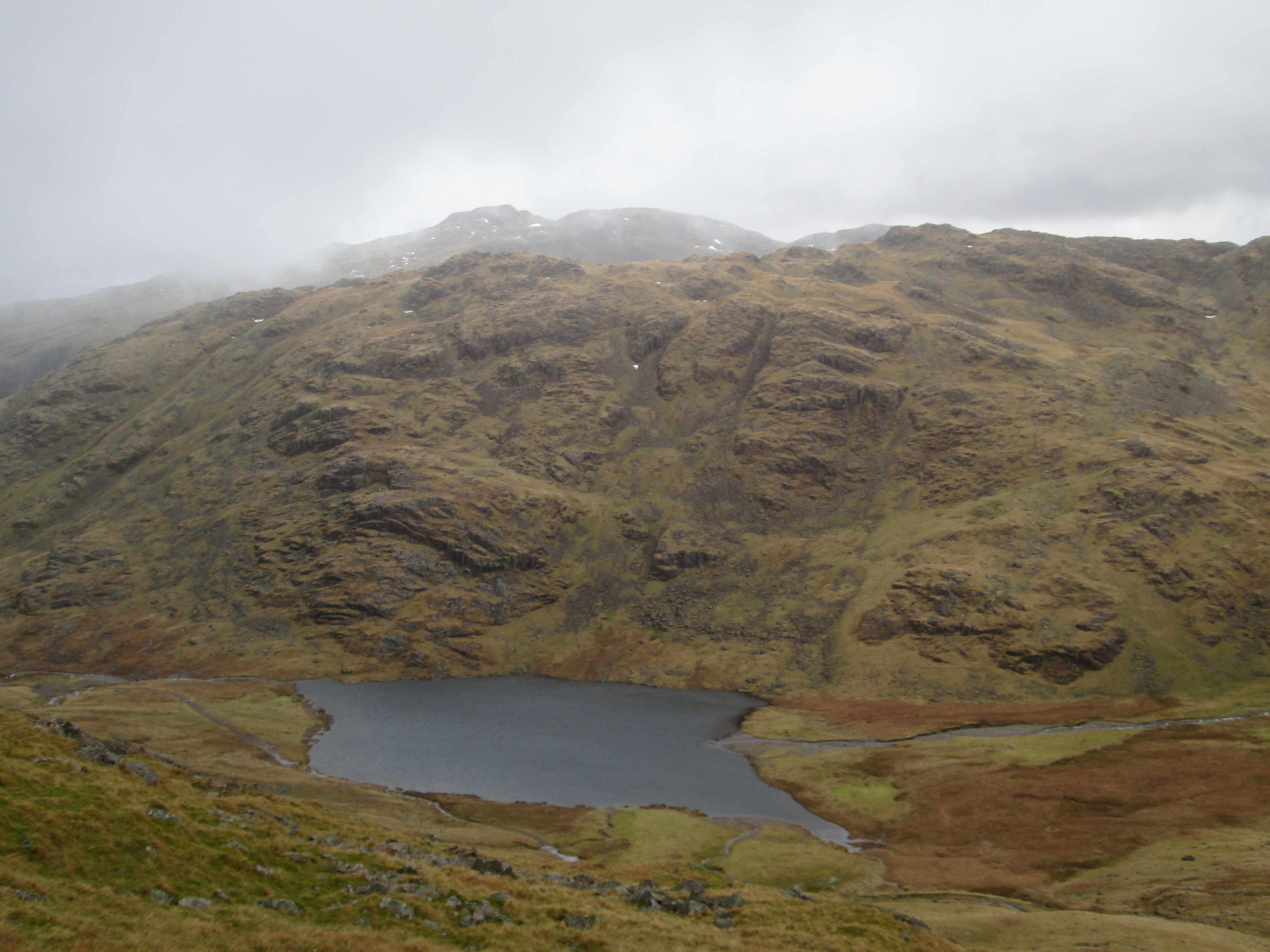 After this I give up on pics because the cloud closes in.

The only additional point to make for the benefit of those who might want to do this route is that, although the path over to Broad Crag is clear up to around the watershed, it's unmarked after that, and you need to be very precise with the compass to find your way, otherwise you can go very wrong and end up with a very long walk back to Wasdale Head.

Scafell Pike is very straightforward from the confluence of the paths, although care is needed again with the compass. I went a good way wrong the first time, thinking I knew where I was going.

To ascend Scafell, I avoided Lord's Rake because of falling rock stories, and took the route up the stream that flows from Foxes Tarn. It's a little bit of a scramble, but quite straightforward if there isn't too much flow in the stream. And then the descent off the back of Scafell down to Wasdale Head is simple: just take a WSW bearing and go.

Finally, don't forget to complete with a visit to a place of cultural, architectural and historical interest... Hi Alteknacker,
I did this with a friend way back in 1978 in good visibility, after this fine report its inspired me to have another go at it with Denise and give her a chance to do some new Wainwrights, its a great route and, I hope, if you have another go, you get the views.
Thanks for jogging my memory.

Fantastic effort, 9000ft in ascent, in old money and in the clag too.

Now that's what I call a good day out. Shame about the clag but good pics all the same. Well done you.

That's a pretty impressive round, a bit harder than Wainwright's Wasdale Horseshoe (around the other Wasdale near Shap). Stirrup Crag on Yewbarrow's north end does give a nice little scramble.

martin.h wrote:Hi Alteknacker,
I did this with a friend way back in 1978 in good visibility, after this fine report its inspired me to have another go at it with Denise and give her a chance to do some new Wainwrights, its a great route and, I hope, if you have another go, you get the views.
Thanks for jogging my memory.

Thanks. I certainly intend to have another go, but I won't let impatience get the better of me this time: I'll wait for a really good forecast!! The plan had always been to explore some scrambles around Pillar, so I hope to do that also. Who knows - may meet you on the round.
The one good thing about doing it this time was that I met not a single soul!!

simon-b wrote:That's a pretty impressive round, a bit harder than Wainwright's Wasdale Horseshoe (around the other Wasdale near Shap). Stirrup Crag on Yewbarrow's north end does give a nice little scramble.

Yes, it was reasonably hard work, particularly this time because of the effort of maintaining one's balance in the strong wind.

trailmasher wrote:Now that's what I call a good day out. Shame about the clag but good pics all the same. Well done you.

Yes, although I'm not really one for trudging through clag. The trouble is, it's a 4 hour drive, so once you're committed to driving there, you might as well do it.

Thanks for the kind words, but I think you're being rather charitable about the pics....

All the pics I've seen of this area in fine weather are really brilliant, so I'm determined to do it at least once in clear weather.

You were robbed Atleknaker, all that graft and the damn clag closes you out....that's just not right

it did make for some pretty dramatic photos though and as you say in the comment above, once you've made the 4 hour drive what else could you do....next time mate....next time

Users browsing this forum: past my sell by date and 12 guests