This was my first opportunity to escape to the great outdoors after the recent inclement weather, as usual I have been watching the weather forecast

I was hoping to tackle some new Munro's and my plan was to head NW again, however after the recent snow and wind, I was reluctant to drive 3 hours each way only to end up disappointed

The forecast for the NW was a 70% chance of precipitation, whereas if I headed into the borders the forecast was 5% so decision made

After reading Scoob's recent trip down to White Coomb I decided to head down to a part of Scotland I am not very familiar with. I have been through Peebles but never driven down the A708 which runs alongside Loch of the Lowes. As I wasn't familiar with the road I took things a wee bit easier, especially as there were a few patches of ice and snow at the road side

Arrived at the well sign posted car park at 9am, only a couple of vehicles parked one was a National Trust Path Repair vehicle and I would meet the 4 workers on the initial ascent as they were placing/re-arranging stones on the path.
Decision time, I had my crampons in the car, which I had adjusted and even watched a "you tube" on how to put them on and tie them - decided to leave them in the car as I would carry my spikes and use them if things were to get a bit dodgy higher up Looking back down onto the car park Out of the car park I took the left hand path which took me up to the viewing point for the waterfall, so I took a few photo's and headed back down and crossed the bridge and up the path that was being maintained.
The path that runs up the east side of the waterfall was excellent, kind of reminded me of the "wee bookill", as a result good initial progress was made.
Confession time (again), it wasn't until I was struggling up the steep slopes of Rough Crags, that I got out my printed copy of the WH route, next time I will prepare better before heading out. As soon as I starting reading the route description I realised I was going in the opposite direction

Back to the walk, as I wrongly assumed that White Coomb was the first hill I had to find somewhere to cross the Tail Burn, before I could start the serious climbing

However, as usual me and crossing burns have history, I seem to walk along the banks dithering and hesitating instead of just going for it 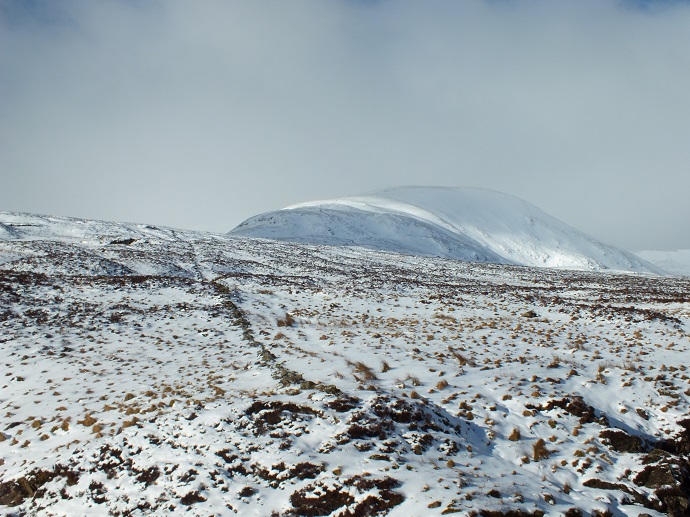 First glimpse of what lies ahead

As I was now way off the beaten track I had to wade through snow covered heather which was really tough going. The path that heads uphill was completely invisible, so I was navigating solely by using Maverick on my phone. The forecast suggested that there would be wall to wall sunshine, however I was in clag for the final 300m of ascent, which also meant I couldn't see where I was going or the summit Rough Crags ahead, note the stone wall and no footprints to follow, clag also developing That is the handle of one of my poles, snow about 3ft deep Angle of ascent up Rough Crags

The climb up Rough Crags was tough, the snow depth varied from an inch to a couple of feet and it was soft. After struggling for what seemed like ages I reached the top of the crags, the surface was now starting to firm up so it was time to get my trusty spikes out again

According to my phone the route to the summit of White Coomb seemed to follow an old stone wall and a nice straight wooden fence, which resulted in a style to save clambering over the fence They do like the fence posts in a nice straight line in the Borders, note the wall on the left and the lack of visibility The views from White Coomb were almost non existent so I didn't hang around and set off following the nice straight wooden fence north, after about half a mile the clag lifted and I could see the way ahead to Lochcraig Head - it does make navigating so much easier - especially when the path is covered in snow and there are no footprints to follow

The walk across to Firthbrig Head was easy, no deep snow and quite a few icy patches that enabled me to make good use of the spikes The descent, then ascent up to Lochcraig Head The bigger of the cairns on Lochcraig Head Loch Skeen, note the cornice in the foreground

Next stage was the descent down on the deep smooth snow to the bealach before the torture of the final ascent up the same deep snow up to Lochcraig Head, once again there was an old stone ramshackle wall to follow uphill. I really did struggle going up and lost count of the number of times I stopped to admire the views

Finally the terrain levelled out and I could see a cairn in the distance and a couple of guys were taking photo's. After a brief chat I headed north as my phone indicated the true summit was about 400yds away and didn't want to put in all that effort only to find I had missed the summit. The walk across to the couple of stones that is the summit was directly into the wind and after a couple of photo's I quickly headed back to take a few photo's of Loch Skeen. Loch Skeen from my lunch spot out of the wind

The initial descent off Lochcraig Head was good fun, going downhill on a large snow field makes for an easy descent, unfortunately once that bit of fun was over, the snow became soft and slushy and was sticking to the bottom of my boots/spikes. When snow covers the heather and peat hags you tend to forget what you are trampling over, it is not until your boots sink and come up all muddy you can then visualise how boggy it would be without the snow Always a nice sight on the descent

The path seemed to follow the wall downhill, however this time I was able to follow the footprints of the 2 guys I met on the summit. All was going fairly well until the footprints seemed to head off towards the Loch, I opted for what I hoped would be the direct route (again). Once again I am not sure it was such a good idea as there were plenty of hillocks to either go over or round, eventually I picked up the path as the melting snow revealed it. The descent then was easy and in no time I was back at the car.

5 hours of almost non stop battling with hard snow, soft snow, slushy snow, deep snow and any other sort of snow you can think of was tough but very enjoyable.
Next

All these commenst about enjoying struggling through this white stuff makes me feel like you're longer the "fair weather walking", i'm sure you once claimed to be.
A good few reports recently FF; keeping me going until work relents and I can get back out there.
I think the April meet is gonna be my first outing since the last one.
Tough times.

Nice one Martin. Good little circuit this one

Grey Mares tail looked good. I must admit I didn't obey the sign at the viewpoint when I paid a visit a few weeks back

MG1976 wrote:All these comments about enjoying struggling through this white stuff makes me feel like you're longer the "fair weather walking", i'm sure you once claimed to be.
A good few reports recently FF; keeping me going until work relents and I can get back out there.
I think the April meet is gonna be my first outing since the last one.
Tough times. M

Not easy being you

One of these days you may get to walk on white stuff, but being made of tough stuff you wouldn't struggle

I will be in touch regarding departure time for heading way up north. Hope to get my new car within the next couple of weeks

PeteR wrote:Nice one Martin. Good little circuit this one

Grey Mares tail looked good. I must admit I didn't obey the sign at the viewpoint when I paid a visit a few weeks back 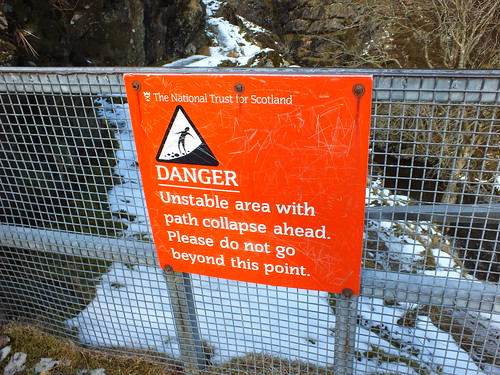 Nice one deep snow in places and some good photos

Tried to get onto Beinn Bhuidhe (Inveraray) same day via South gully ...waist deep snow and only got to 400m before bailing ...

Very under-rated part of the world. It's a lovely walk isn't it?

kevsbald wrote:Very under-rated part of the world. It's a lovely walk isn't it?

Great report and fantastic photos. Having just completed the route (minus white coomb) in Easter sunshine and a lot less snow, I can confirm that under that snow was a lot of boggy ground - especially lochside east

Missed thsi first time round - would agree it's certainly a nice walk and looks even better in the snow. Had a similar problem when trying to find a way across the burn