Yet another month when I only had one weekend day free for walking, and yet another dodgy weather forecast

: however, at least this time I was in Arran, which always helps

.
I was over for a long weekend with family and friends, and I'd negotiated the Saturday free for a walk. I have been on a bit of a side project to climb all of Arran's S2K Marilyns over the past two or three years, and I thought this might be a good opportunity to have a look at Beinn Bhreac, a fairly obscure hill that sits tucked away up at the head of Gleann Easan Biorach, behind Lochranza in the north-west of the island.

our_route.gpx Open full screen  NB: Walkhighlands is not responsible for the accuracy of gpx files in users posts
There was a grand view of Arran on the ferry over from Ardrossan on the Friday, with quite a bit of snow still on the higher peaks, but a bit of sunshine too. By Saturday, however, it had clouded over quite a bit

: the forecaast was also for stormy weather coming in from the west towards the end of the day, so an early start was in order. I left the car at the parking area near the pier at the western end of Lochranza, to reduce the amount of road walking I'd have to do at the end of the day a wee bit. I was very glad of this later! The village was looking rather scenic despite the grey weather: the prominent hill just behind Lochranza here is not Beinn Bhreac of course, but an outlier of the main Arran Corbetts range known as Torr Nead an Eoin. It didn't take long to get to the other end of Lochranza village, where the Arran distillery enjoys a scenic location just before the bridge over the Allt a'Mhuilin burn. The well-trodden path starts out in grand manner, ascending gently up the very scenic glen. Higher up, however, it gets much rougher and significantly boggier, with a fair proportion of the path actually being underwater at this time of year

, presumably from all the snow-melt. Despite the increasing roughness and squelchiness of the path, the scenery remained impressive, and the recent snow-melt (plus patchy showers) certainly made for some impressive waterfalls on all the burns. The path continues to the west side of the Allt a'Mhuilin, and there are two entertainingly scrambly crossings of major tributary burns, the Allt a'Chrithich and the Allt Dubh, to be crossed on the way up the glen. These both had impressive waterfalls too: these ones were on the Allt a'Chrithich. A view back down Gleann Easan Biorach, with the craggy Torr Nead an Eoin ("The tor of Ewan the ned", possibly

?) towards the right-hand side: Higher up, the path makes a long, slow climb up into the Steppes of Central Arran, and I started to worry whether the advertised Loch na Davie was ever going to appear, or whether I had somehow managed to wander off-piste. The path was getting increasingly indistinct too, and unfortunately I was starting to ascend into the Clag . This small body of water has apparently been declared to the "the purest water in the UK" by the University of Glasgow, no less, and it is the ultimate source of the Arran Distillery's water. It also sports two exit burns, one at each end: as well as the northern branch that descends to Lochranza to supply the distillery, the southern exit burn forms the headwaters of the Iorsa Water, Arran's largest river. Given all this, I had expected Loch na Davie to be bigger, but in fact it is just a fairly tiny upland lochan. Just a wee bit past the loch, I left the path (which continues on into the top of Gleann Diomhan) to make a rising traverse through the Clag onto Beinn Bhreac's southwest ridge. This was a straightforward enough ascent, although impressively bouldery. Beinn Bhreac turns out to sport an impressive summit cairn for such an obscure hill, but then there's no shortage of construction material I suppose

! In better weather there would have been impressive views from here (see Johnny Corbett's WR on this hill), but there was nothing to see today apart from Clag and boulders. As I descended roughly northwest from the summit, I encountered some fairly large lingering snow patches on the north-facing slopes. Unfortunately I managed to drift a bit too far to the north on descent, meaning that I emerged from the Clag to realise that I was on the wrong side of the bealach between Beinn Bhreac and its craggy northern outlier, Beinn Bhiorach: I therefore gave myself some completely unnecessary re-ascent to gain the bealach again and descend westwards into Gleann Diomhan. However, when I eventually emerged again through the Clag on the correct (west) side of the bealach, there was a pleasantly hazy view right down Gleann Diomhan and on into Glen Catacol: 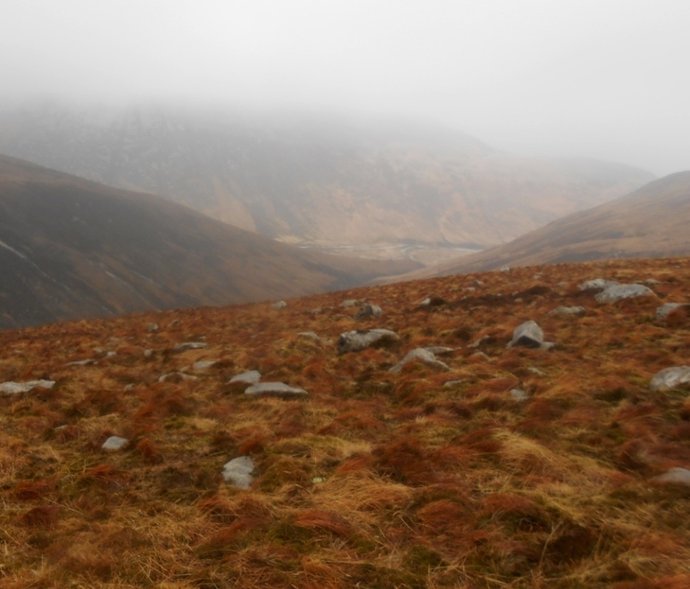 Soon I was down at another rough path, the one that descends Gleann Diomhan into Glen Catacol, and I stopped at this point for some lunch, enjoying the attractively brooding landscape of Gleann Diomhan below me. Now I was about to reach the real highlight of this walk: the Gleann Diomhan National Nature Reserve. This slightly unexpected fenced-off area in the back of beyond, protected from North Arran's numerous red deer by a high deer fence, has been created mainly to protect three separate species of very rare trees that only grow in this mid-section of Gleann Diomhan, and nowhere else in the world. The trees in question, for those who need to know these things, are the Arran Whitebeam (Sorbus arranensis), the Arran Split-Leaved Whitebeam (Sorbus pseudofennica) and the Catacol Whitebeam (Sorbus pseudomeinichii). Sorbus arranensis and Sorbus pseudofennica are on the Red List of endangered species; the third species (pseudomeinichii) consists of two remaining living trees - it was only discovered a few years ago and seems to be so rare that the Red List hasn't even heard of it yet. These are all relatives of the rowan, and they are very attractive when in leaf (back in the 1960s it was apparently possible to buy saplings, and I have been shown some examples in locals' back gardens down in Brodick), but at this time of the year they were bare of course. The Gleann Diomhan path goes through a gate in the deer fence and right through the middle of the Nature Reserve, giving plenty of opportunity for Rare Tree Spotting. The trees have certainly found an incredibly scenic spot to hang on in there on the verge of extinction: Gleann Diomhan is quite spectacular. Descending towards the bottom of Gleann Diomhan, there was an intriguing view of the awesomely bouldery eastern face of Meall nan Damh, another of Arran's S2K Marilyns and a fine wee hill. I climbed it from the other side a couple of years ago, and I hadn't realised it was as steep as this on its eastern flank At this point, the weather deteriorated rapidly, with the promised Stormy Weather From The West hitting quite suddenly. A bit of a shame, as Glen Catacol would have been really scenic in fine weather. In fact, even in near-horizontal sleet, it was still rather pretty. The Abhainn Mor (the Catacol Burn) was in full spate by now, and looking quite impressive. All the same, it was something of a relief to emerge onto the main A841 road near Fairhaven, a wee bit south of Catacol. The road walk back through Catacol and eventually into Lochranza was a bit of an adventure, as the weather had really turned nasty: I didn't stop for any photos, not even at Catacol's scenic row of fishermen's cottages known as the Twelve Apostles, but just hot-footed it back to the car. Ah well, you get the weather you get

. On a better day, this could have been a real wee gem of a walk, but even on a dreich day like this, it was a grand outing

Really enjoyed this report - good to read about hills I've never heard of before.