Windy but safe on Broad Law

Windy but safe on Broad Law


A fairly short report on our first trip to Scotland 2015.
A planned weekend away, we were hoping for settled weather and plenty of time in the hills, two days of new Corbetts and Donalds with uninterupted views etc etc, well, Saturday was a complete washout with heavy rain and very strong winds around Hart Fell and Under Saddle Yoke so we opted for Broad Law to Dollar Law as a fairly straight forward alternative until we arrived at the Megget Stone and were met with horizontal rain and knock you over wind, that put paid to any enjoyment in the hills so we went away and decided to play at tourists, looked around Dumfries and then went to have a look at the abbey at New Abbey down the A710 from Dumfries.

Sunday was meant to be better according to the forecast, so we would give Broad Law etc a go bearing in mind the time needed to get home as to how far we would go.

We arrived at the Megget Stone early, 8.45am and actually got the space by the stone, got out of the car, got thrown about a bit by the wind, then got soaked by a squally shower as we were getting ready for the off, second thought time, mmmm.
After a very quick second thought the decision was made to go to the trig pillar on the summit and take it from there, we were off from the car at 9.15 after much swearing at the wind with most things intact apart from our sanity.

After the initial steep bit up Fans Law it was a pleasant walk following the fence all the way to the summit, the discussion on the way was would the weather improve enough to stay out longer and manage Dollar Law?after all, the fence stays with you all the way, an easy navigational aid. As we were going over Cairn Law the clouds blew over bringing with them the rain, it was like walking through a car wash and thats how it stayed all the way to the summit.

We took shelter behind the U.F.O on the top in the vain hope conditions would improve but by this time we were a bit miserable and the wind made it hard to walk, we resorted to wearing goggles to continue because the rain had turned to hail,we set off with the intention of Dollar Law but the decision was soon made to go back down because it was simply 'orrible weatherwise, but at least we had something achieved to go home with.
So thats how it was and by the time we were back at the car we were uncomfortably damp to say the least, we took our gear off in another brilliantly timed shower, sat in the car and had lunch realising we were out for less than three hours,a very short day and not the busy weekend we anticipated.

Fledgling plans are already being made to have another go during the summer, we feel that it must be a nice walk over to Dollar Law but would much prefer to be warm and dry on the next attempt.

A few photos of our time out, a bit limited on interest mainly down to the weather. Looking back to the start. The way forward, fence for company all the way. Back the way we came. Looking west, rain on the way. Last lump to walk over before the top. Trig and a damp Denise I wonder if Richard Dreyfuss is in there? Ever present fence, follow this and you eventually arrive on Dollar Law via Cramalt Craig, Dun Law and Fifescar knowe. 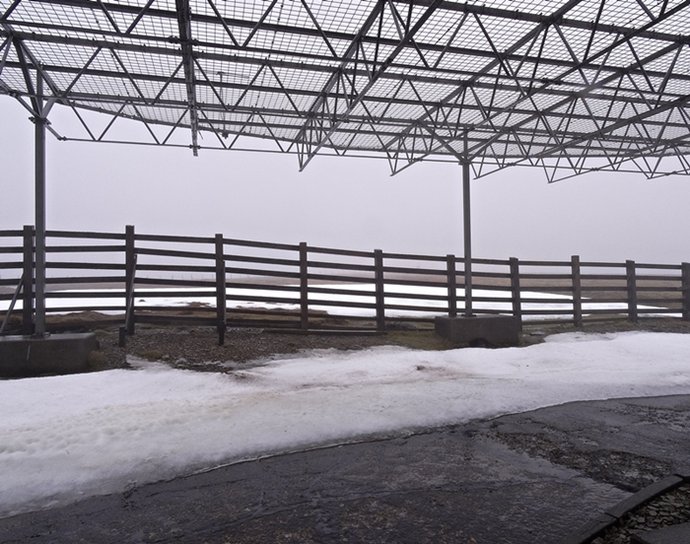 Looking into the gloom from the U.F.O. It's easy to stay in the car and turn round in that weather.

The walk to Dollar Law is indeed a good one.......on a nice day. You'll enjoy it all the more when you return

It's easy to stay in the car and turn round in that weather.

The walk to Dollar Law is indeed a good one.......on a nice day. You'll enjoy it all the more when you return

Thank you Pete, it was tempting not to bother but we couldn't allow the weather to get the better of us the entire weekend and Broad Law is a good 'un to do in such conditions, easy navigation etc.
We'll get another chance at it soon enough on one of those fine warm days we get plenty of

Aye well done you two, coorse conditions that. I've never walked in the border lands, need to rectify that