scnl gullies actual.gpx Open full screen  NB: Walkhighlands is not responsible for the accuracy of gpx files in users posts

Avalanche/weather forecasts haven't been great recently so I took advantage of the hopefully good conditions yesterday & tried to get a few easy gullies done on SCNL.

View from car park, most of the path clear of snow. 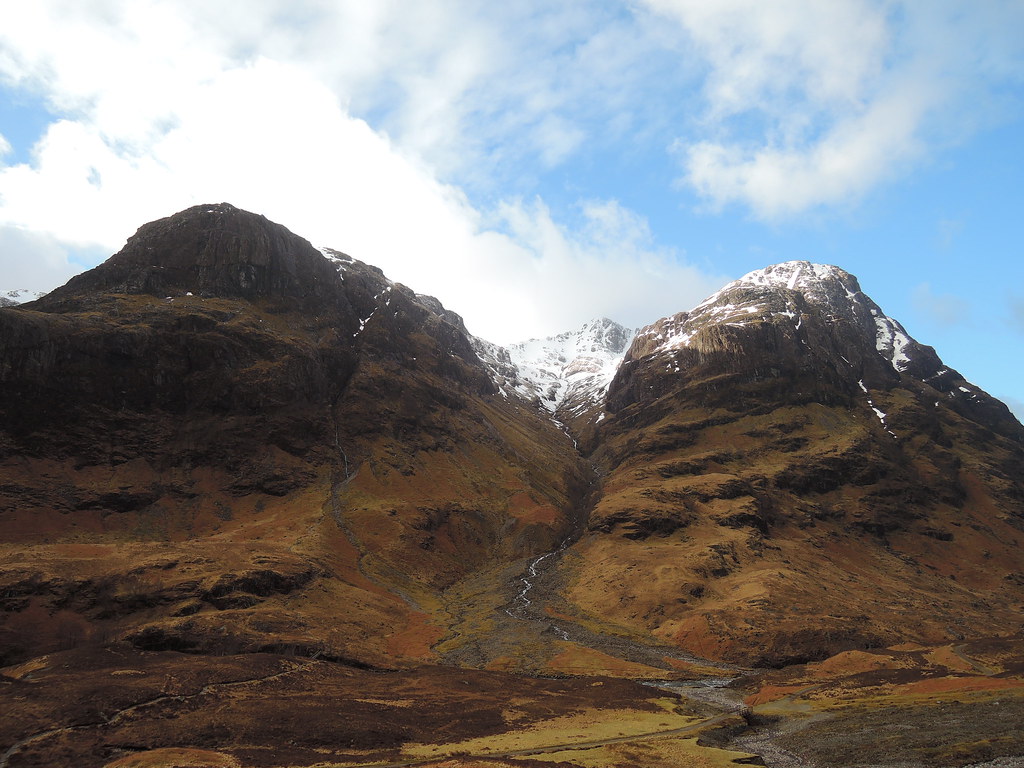 Zoomed in routes, mgmt on here had suggested going up Boomerang Gully (left) down Broad Gully (centre) and up Forked Gully (right). There were a few teams roped up for the harder stuff. Boomerang Gully looked obvious from the path coming up, but as I got closer the route seemed harder to follow. 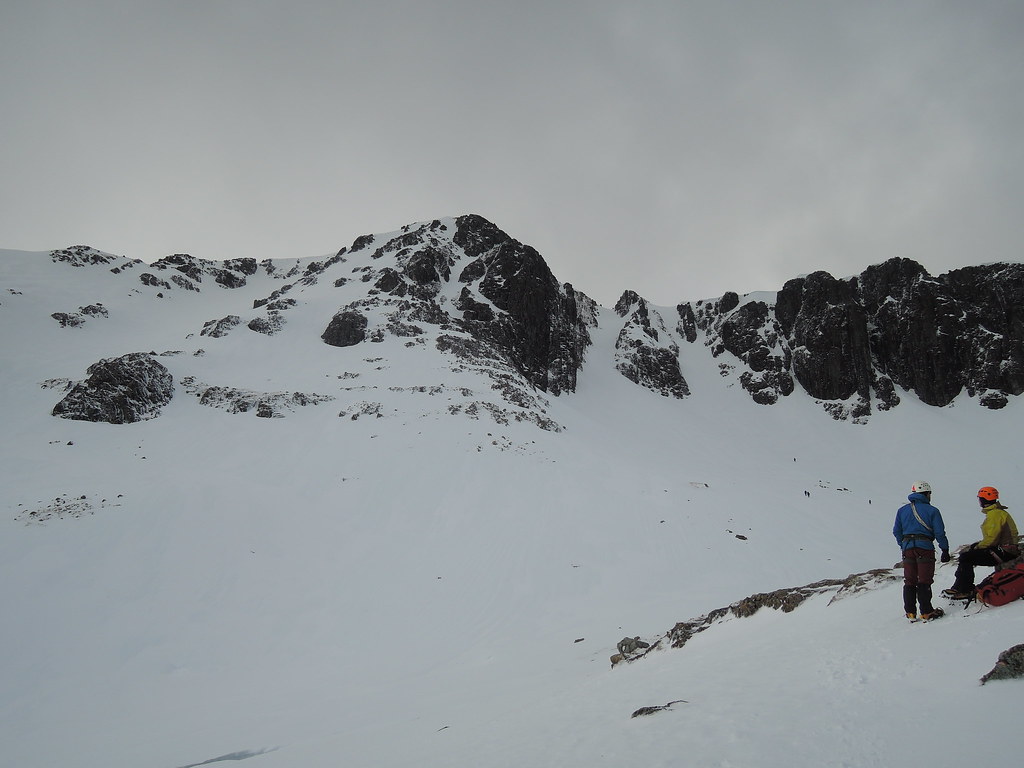 Dorsal Arete is the big rock rib in the middle here, with Broad Gully on its left and Forked Gully on the right. There's a smaller rock spur towards the top of Forked Gully, the easy way is to go round this to the left as the right hand fork is Grade III. I somehow ended up scrambling up the rock spur itself, it looks like there's a mini-gully at the left of it which seemed more interesting than a snow plod. 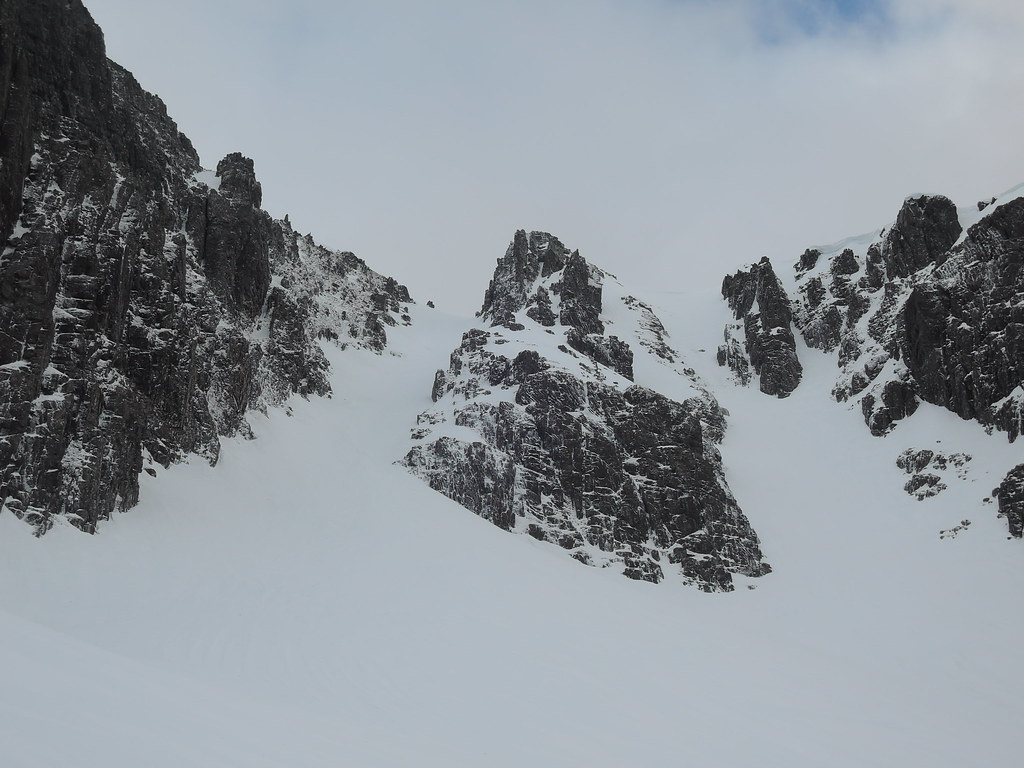 First, it's Boomerang Gully and route finding does seem trickier closer up. 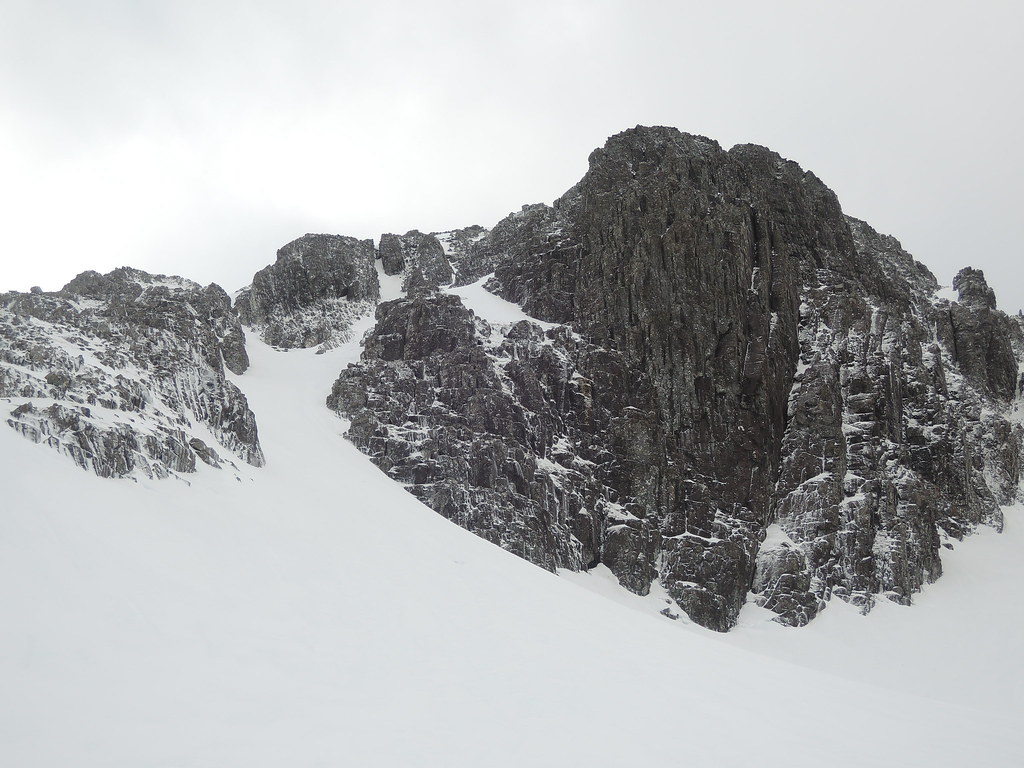 View down with a backdrop of Aonach Eagach. 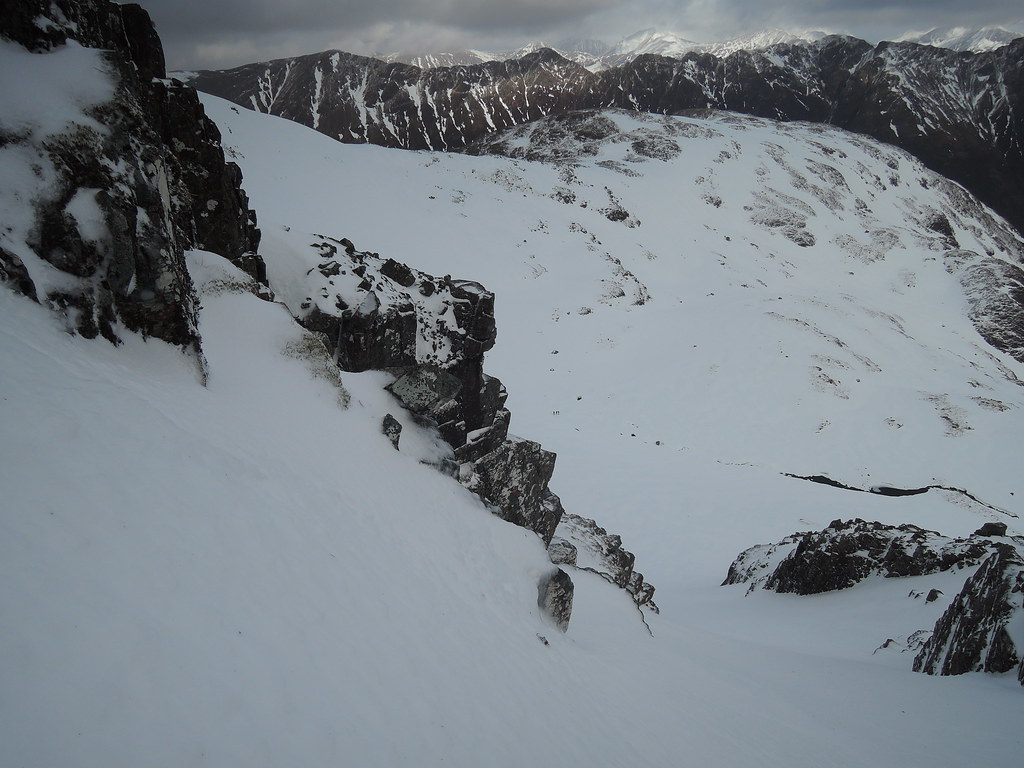 The gully curves round to the right, I'd read that a few people missed the right turn so I took an early branch and went up a narrow gully with an easy scramble on icy rock higher up. the clag was down by now so I wasn't sure if this was the right way. 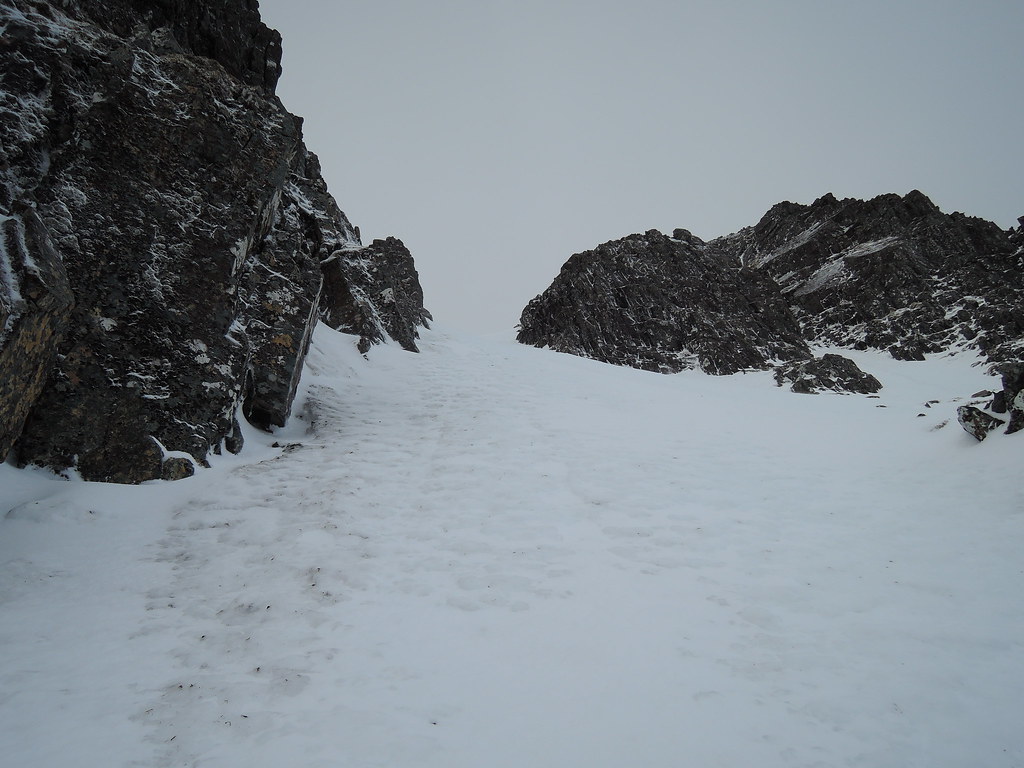 Anyway, made it to the cairn and the cloud was intermittently clearing - maybe this is the real top of Boomerang? 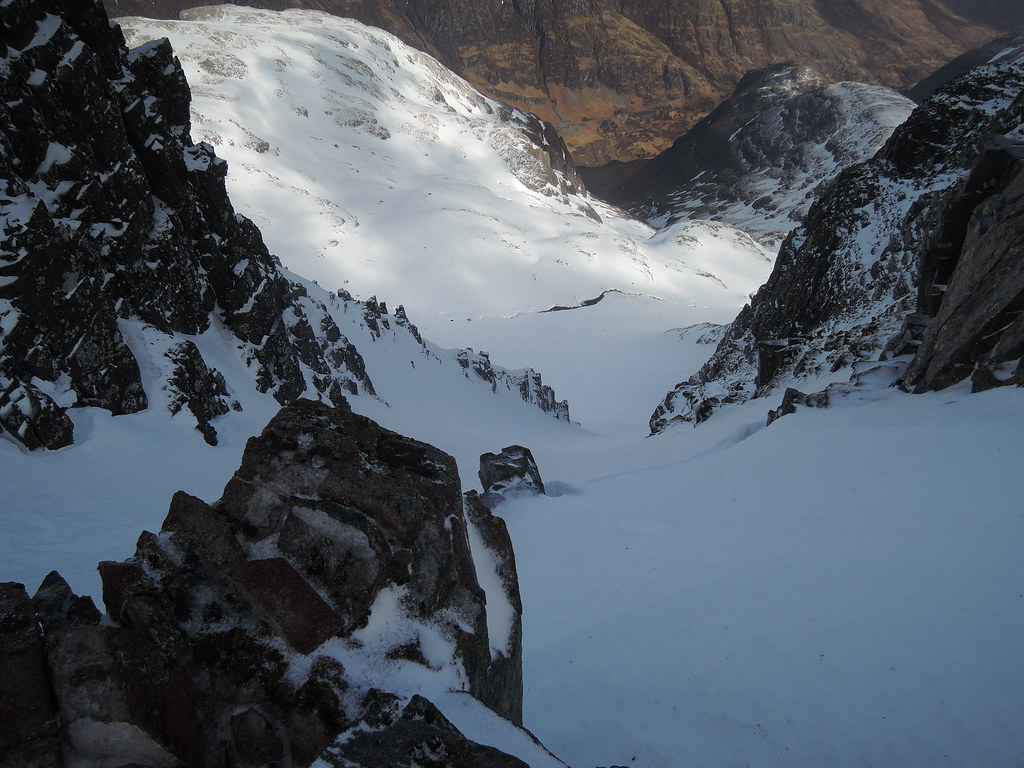 Wandered down to Broad Gully with view of Bidean & Stob Coire nam Beith: 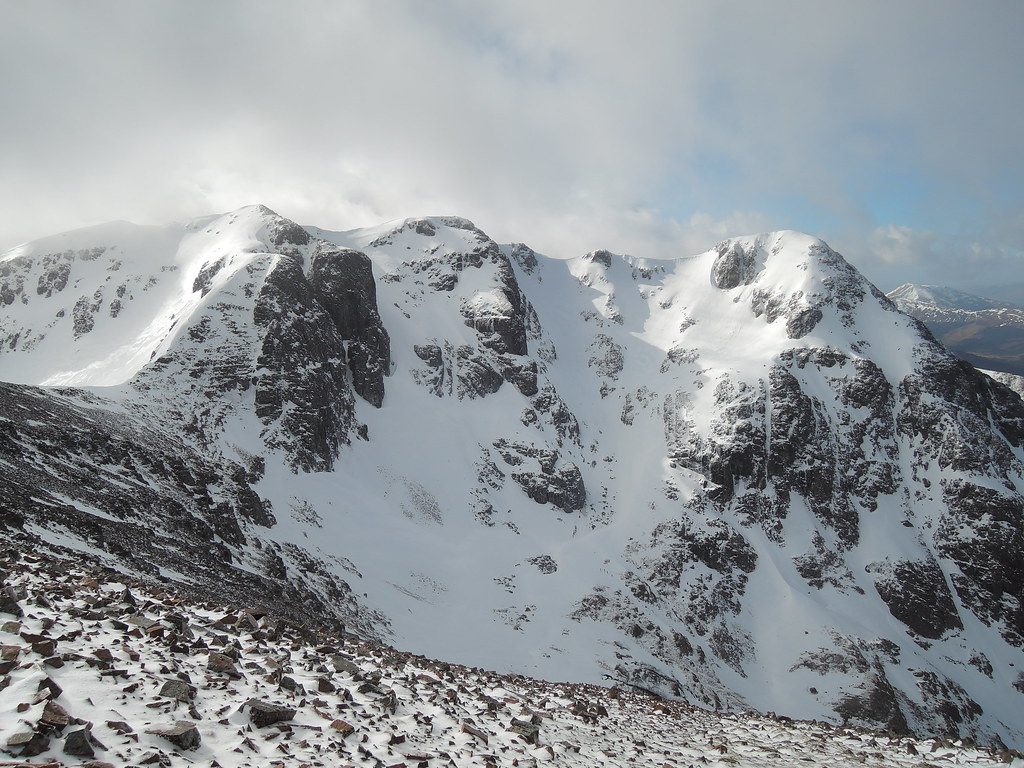 View down Broad Gully, Dorsal Arete on the left looking down... 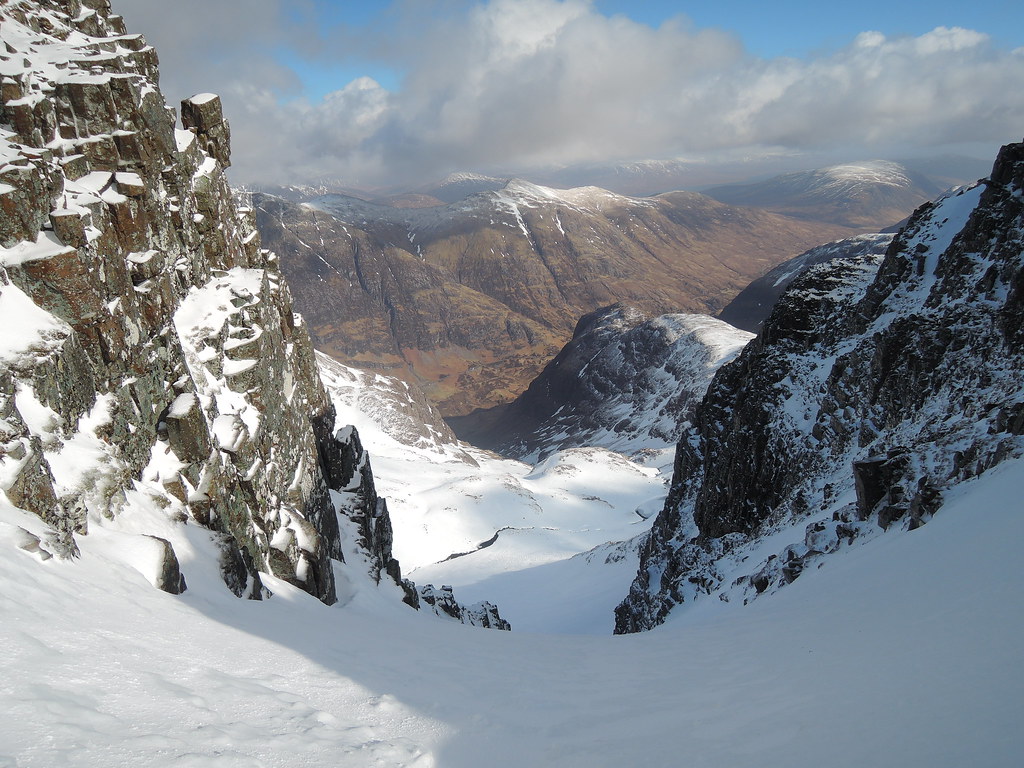 ...and on the right looking up. 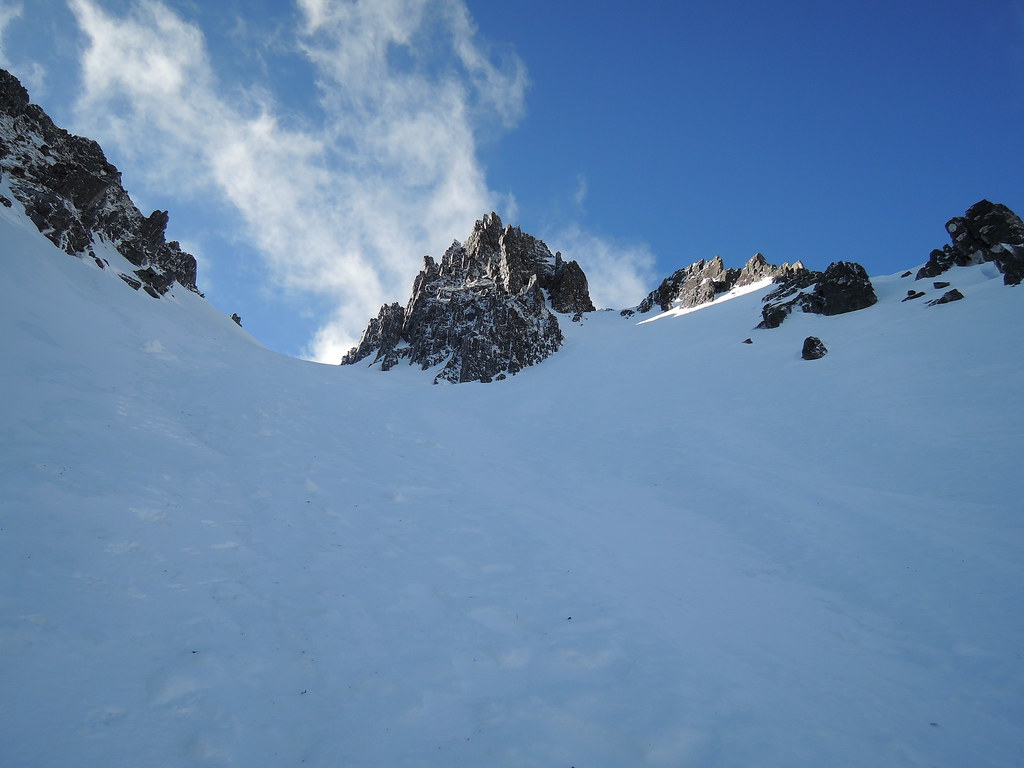 There was a team of 3 on the arete, had a chat with the guy at the bottom while he waited for the other 2 to finish climbing - think they had forgotten about him. Arete looked pretty good, there was an easy scramble on Boomerang and these 2 gullies looked a bit boring with all the snow on them so... 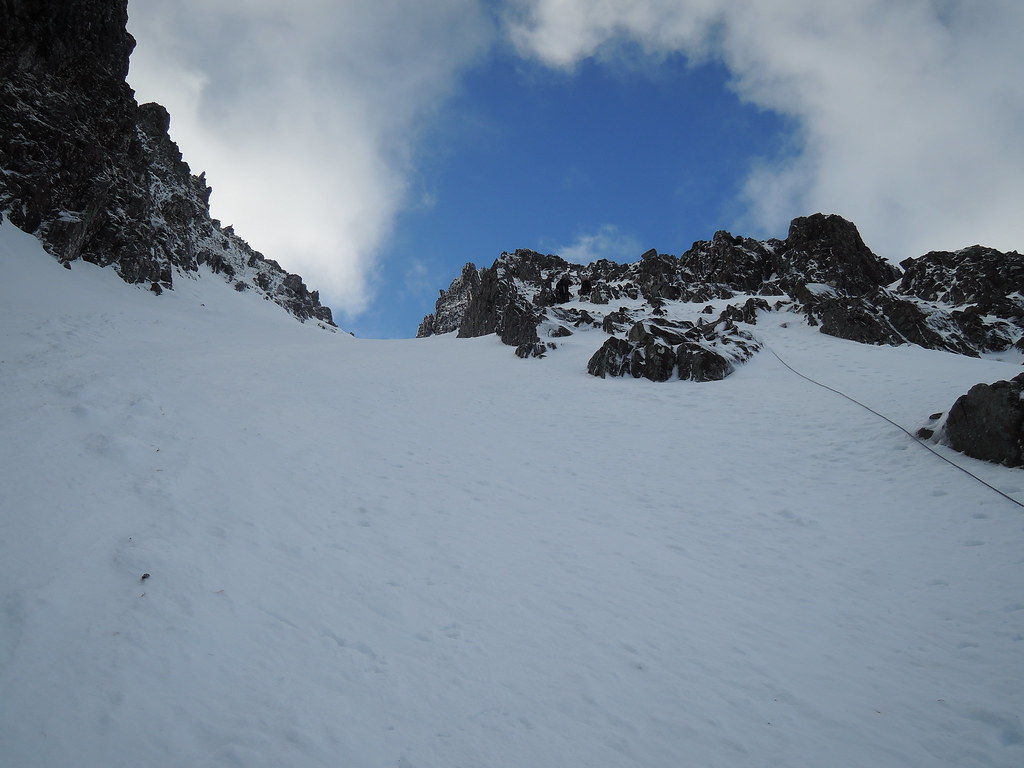 Climber on a narrow route at the right of Forked Gully. 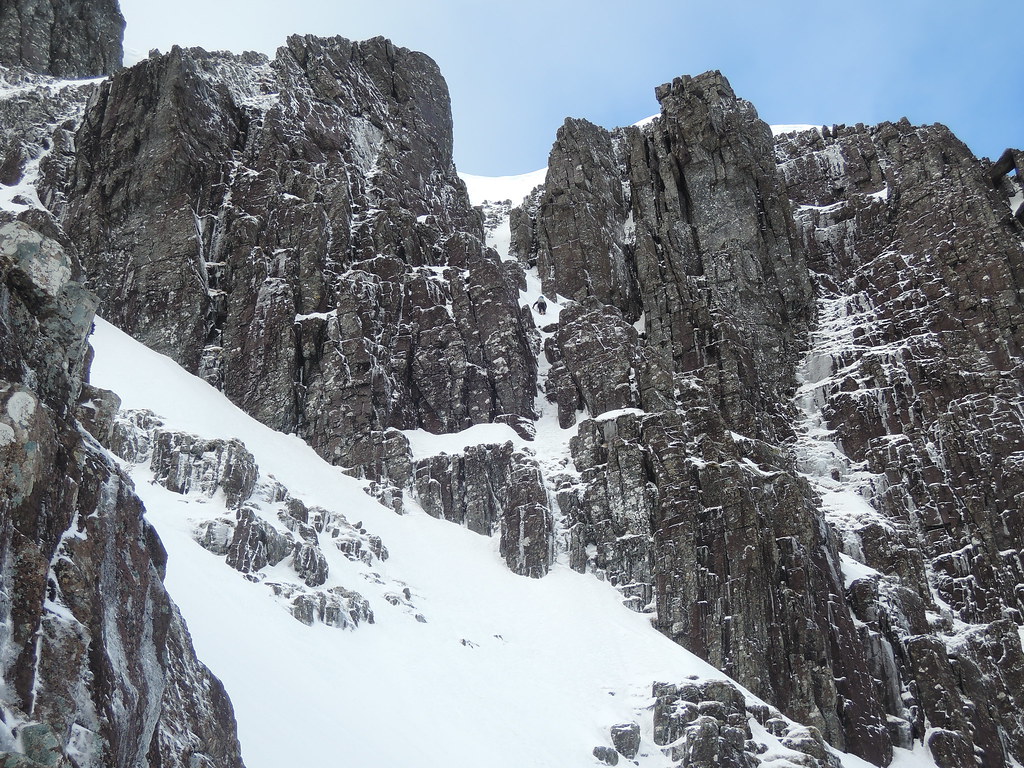 Up Forked Gully with the rock spur in the middle, easy to the left and too difficult to the right but there looks like a steeper mini-gully at the left side of the spur, thought I'd give this a go and back off to the gully if it got too dodgy. 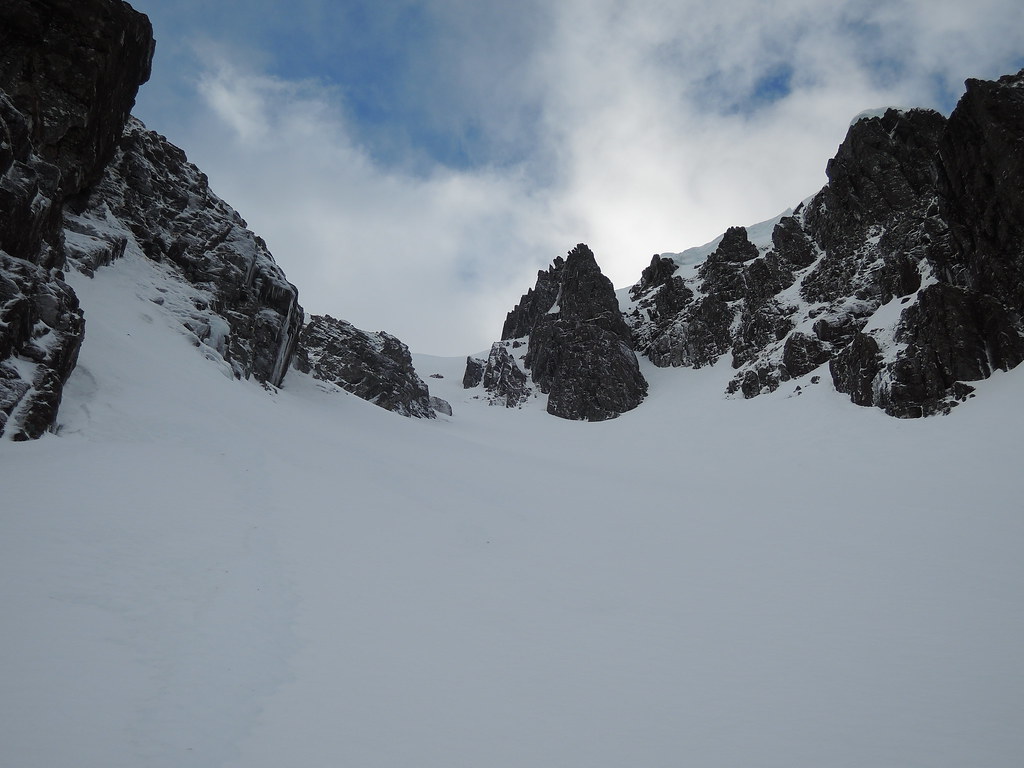 Somehow ended up at the top of the rock, there was a narrow snow ridge at the end which I went over 'au cheval' - one leg either side and a bum shuffle (fortunately there were no witnesses). Narrow ridge from the top: 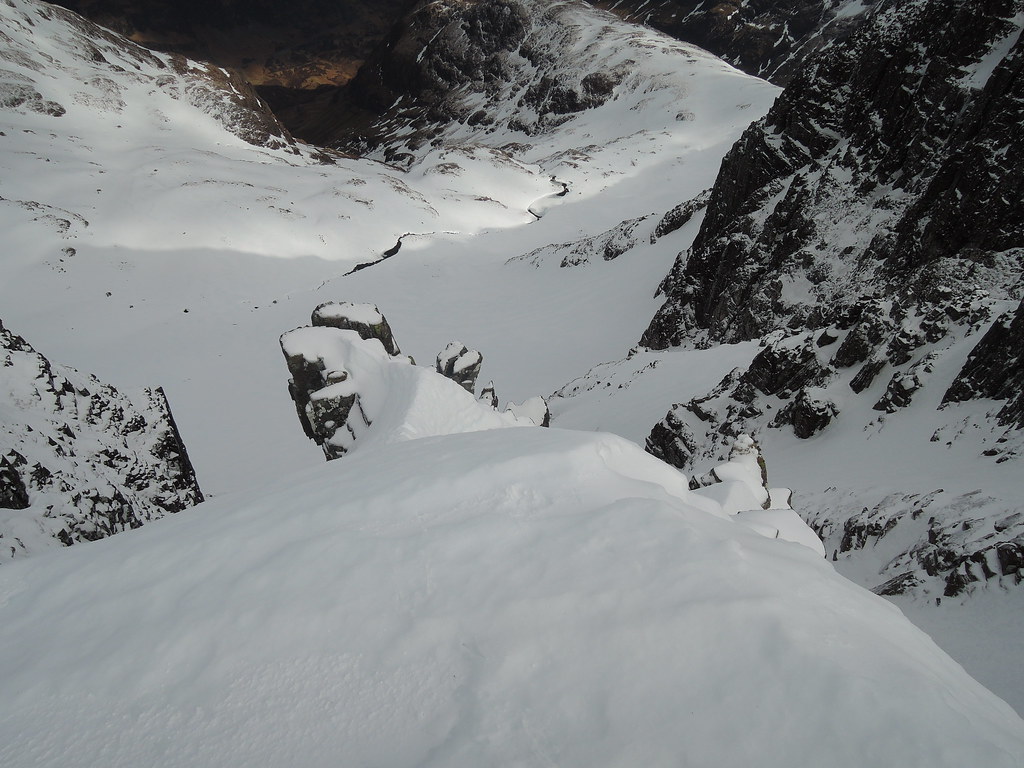 And from the side: 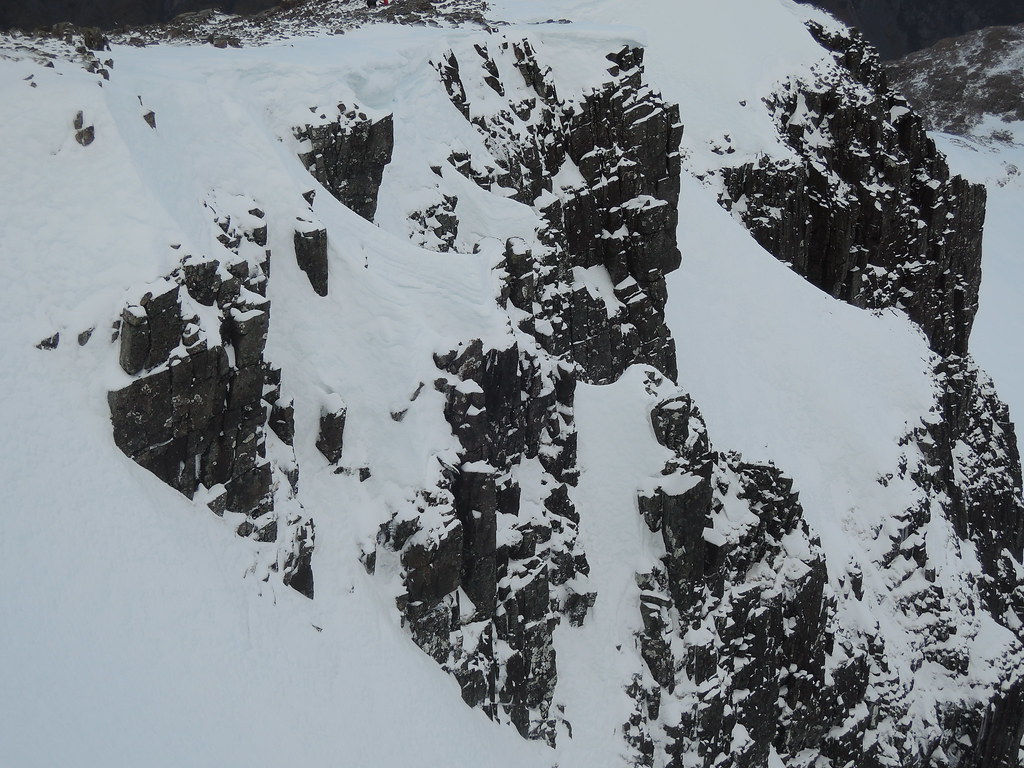 Central Gully on Bidean, group of 3 going to the left of Collie's Pinnacle and one to the right. Did this a couple of weeks ago and met someone who'd come up NC Gully on SCNL and and said it was pretty good, it was in the back of my mind to give it a try today but I was pretty exhausted after the 3. Had a look at the top of NC Gully anyway: 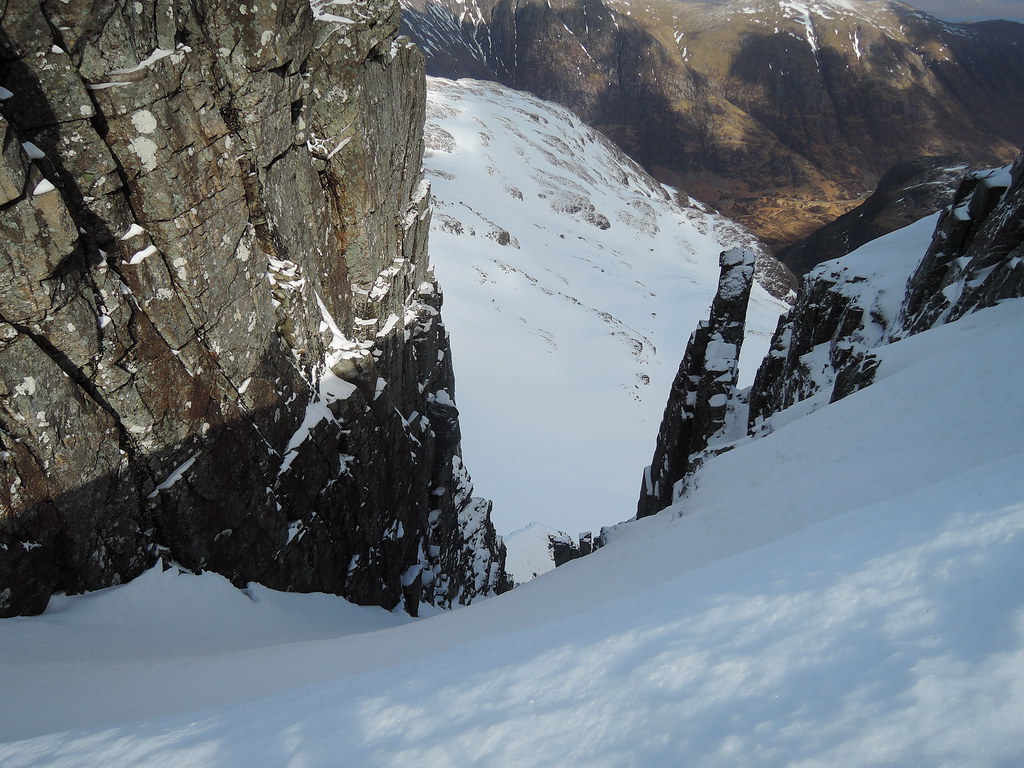 Had a rest & food then decided to give NC a go, descended off the ridge then traversed across steep snow to the start. I could see someone on the ridge but he wasn't moving so I knew there was a team already on it. 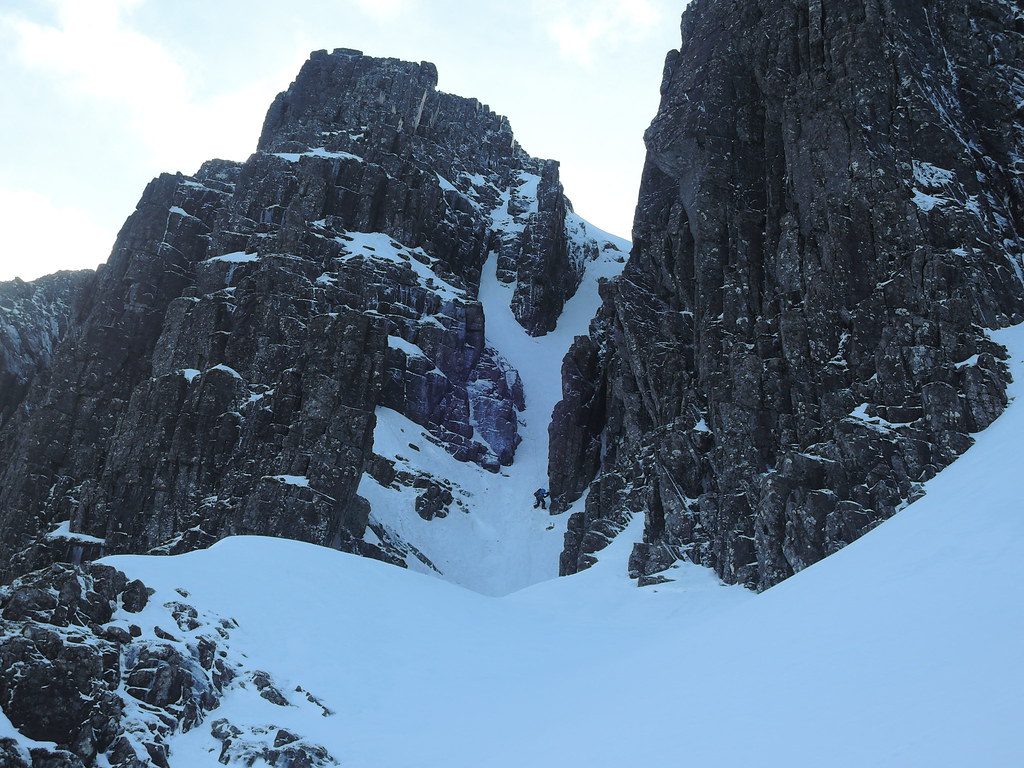 First shared gully of the day, it was stepped out by the group above and I got the occasional shower of dislodged snow. 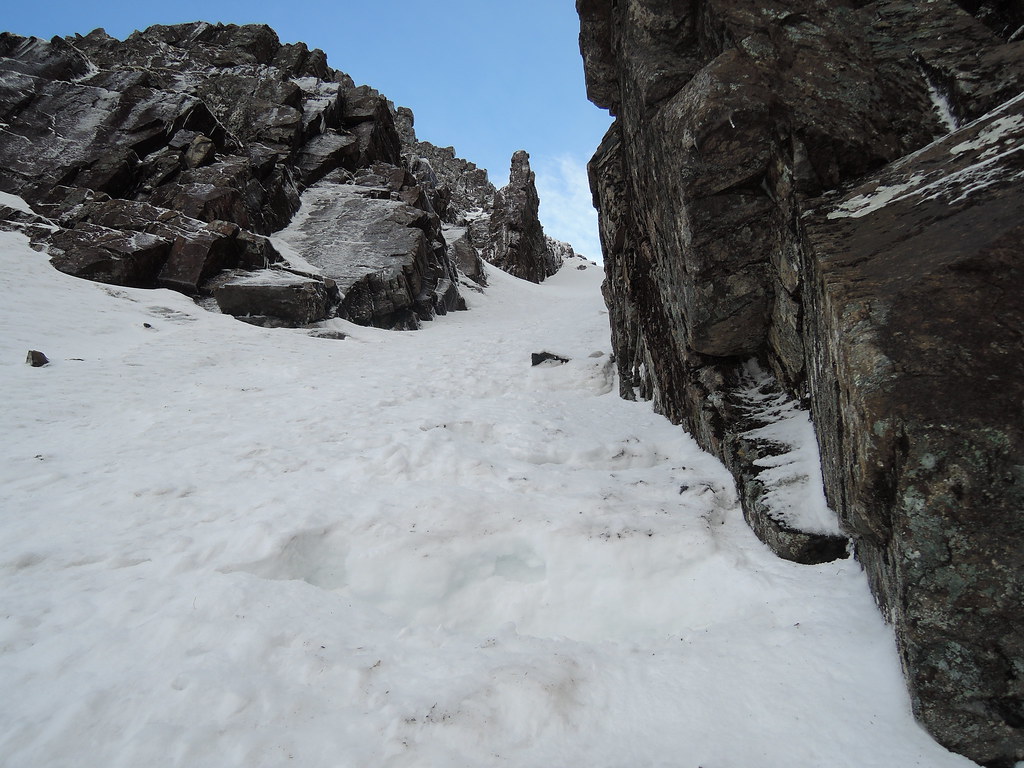 It was a group of 3 and the first winter climb for one of them. Had a chat with them as we waited to move, it gets cold standing still so I could see the advantage of warm belay jackets. View down: 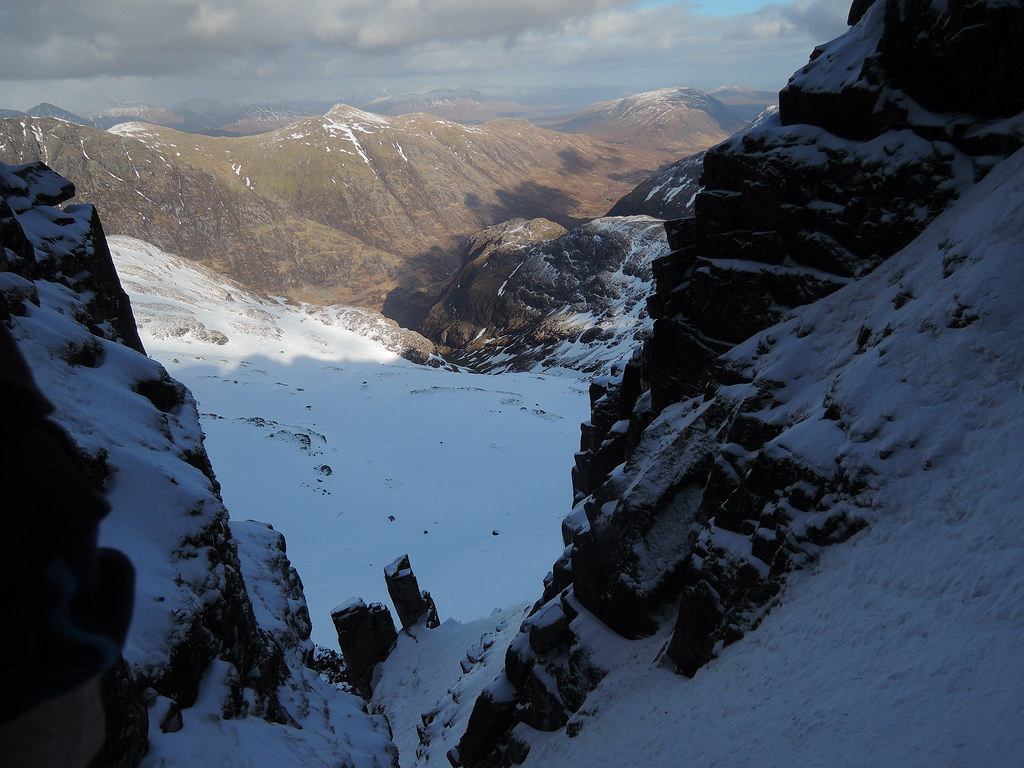 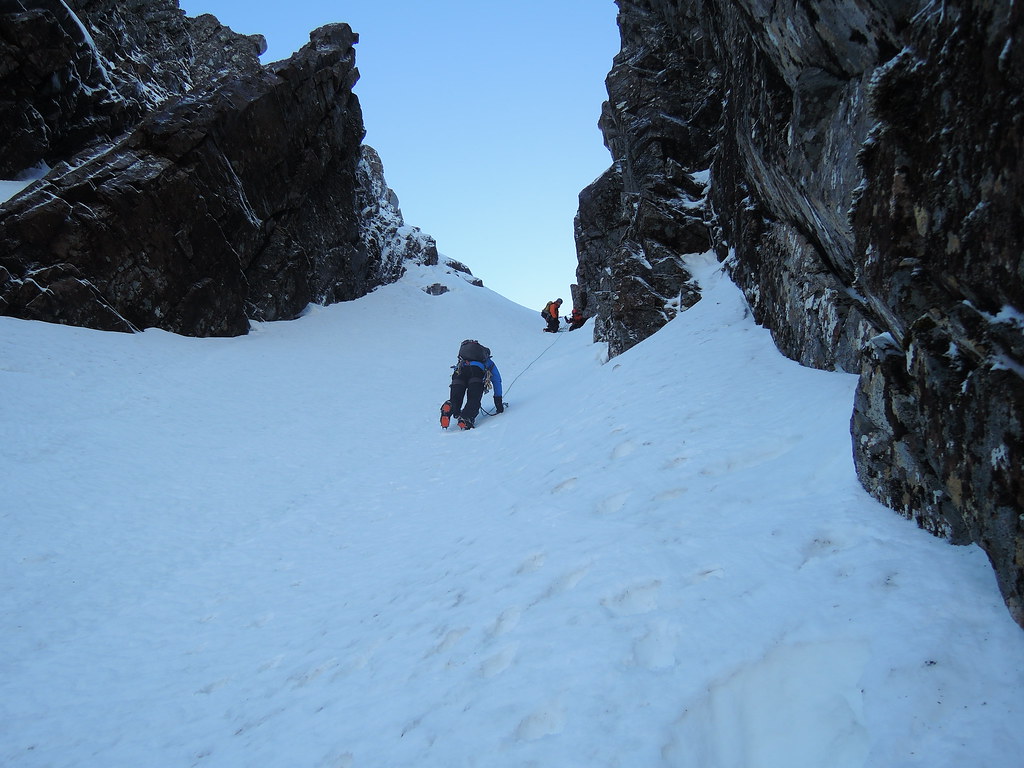 They eventually got fed up listening to me & let me past, nice view down to Glencoe: 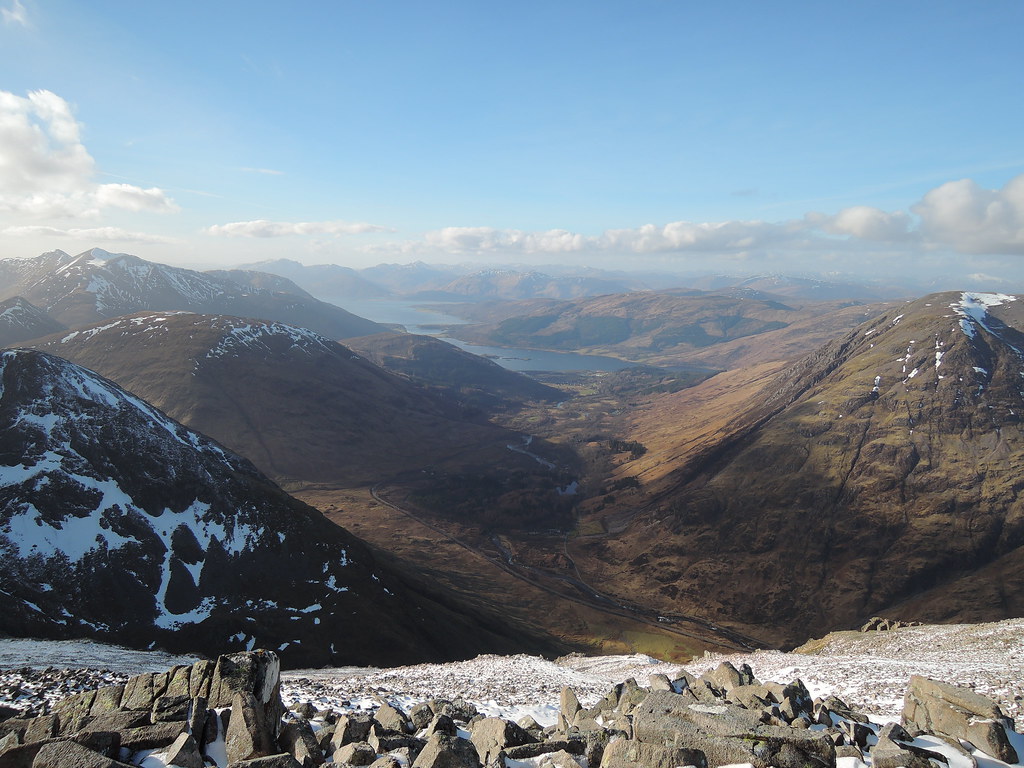 Central Buttress in the middle here, SC Gully on its left & NC Gully on the right: 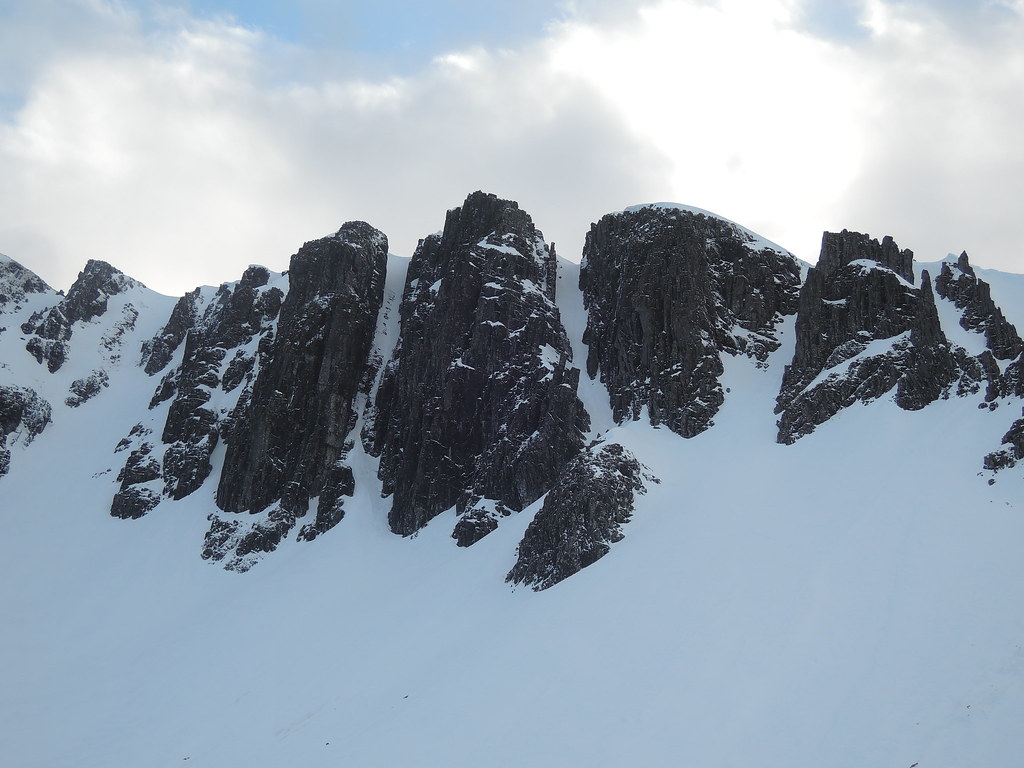 Last look at Boomerang, still confused about which route I took 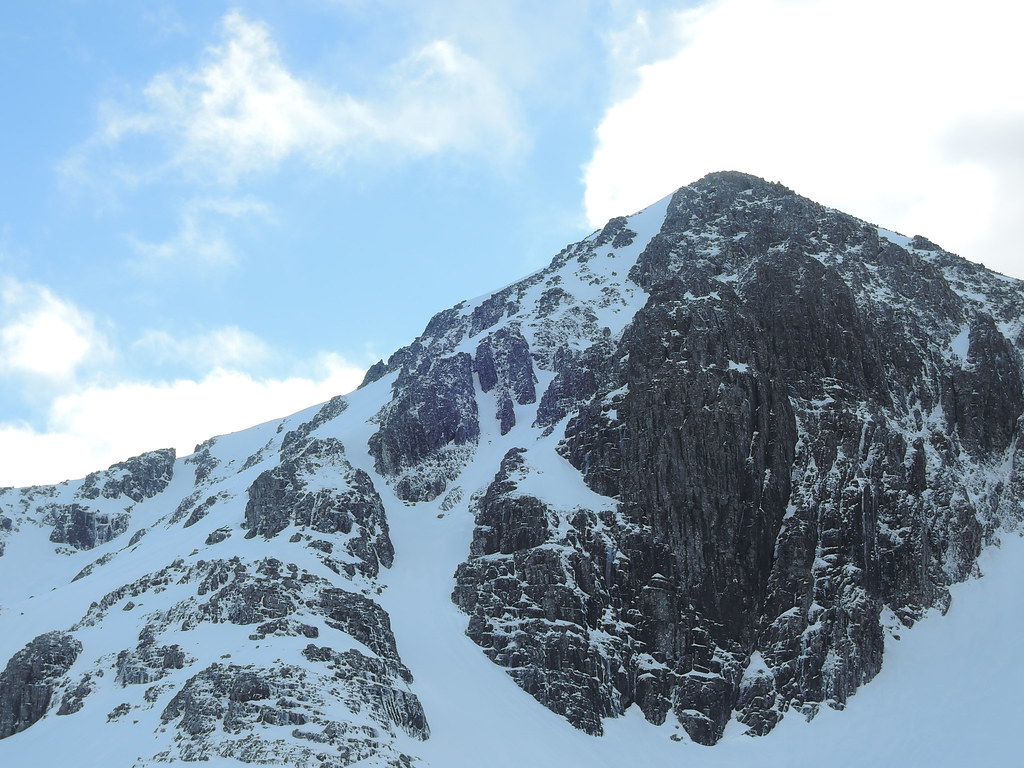 well done gman, i a bit envious you got out, weekend have been rotten last few. the gullies obviously change with snow build up but route finding isnt normally a problem.a few pictures fro when we did boomerang in january last year steep step at the bend right aproaching the top after the bend top of the gully

Cheers, there's still plenty of snow on SCNL, Bidean & Stob Coire nam Beith so there could be queues on Saturday. Central Gully on Ben Lui also looked good good - hopefully get a few more routes in this year.

I don't even want to admit to enjoying reading this - I just feel envious!!

You got some great pics there, that really capture the atmosphere.

I fear that by the time I'm back in blighty, all the white stuff will be gone. Winter gear used once this year...

Alteknacker wrote:I fear that by the time I'm back in blighty, all the white stuff will be gone. Winter gear used once this year...

I could see loads of snow on the Ben so hopefully you'll get a chance to dust the gear off.

Fantastic gman - your reports are making me envious

another grand day out. Great pictures and report

Brilliant report, looks amazing, excellent pictures , I know have a route to go by from your drawings on the photo, thanks for that. Been watching videos on scnl in winter, looks an amazing experience. I've been up in summer and it was good enough, still had snow on it last week when we done the a.e.. itl be bombarded now though, imagine the temps will be too high for any gully climbing though.

summitchaser wrote:imagine the temps will be too high for any gully climbing though.

Yeah, the winter fun seems to be over for this year. Stob Coire nam Beith and Bidean are also worth a look for good easy routes.

Thanks for that, I will look into them. You done aonach dubh yet ? It looks pretty wild

winter isnt over yet gman, was up the ben last saturday, done tower scoop and smiths route, descended tower gully looking for a dropped jacket. tempted to head up this weekend , forcast isnt too bad

mgmt! wrote:winter isnt over yet gman, was up the ben last saturday, done tower scoop and smiths route, descended tower gully looking for a dropped jacket. tempted to head up this weekend , forcast isnt too bad

I'm going for easier stuff and was having a look at number 2 gully the last time I was there but ended up doing Ledge Route. Won't make it up this weekend but sounds like a return could be on the cards, cheers