cruachan route.gpx Open full screen  NB: Walkhighlands is not responsible for the accuracy of gpx files in users posts

I read a report on these hills by Graeme Dewar recently with the title nemesis nailed and i cant think of a better title for this walk today as i have planned this route so many times and always cancelled due to poor weather so was really chuffed to get this done today and glad i did as it was a cracker.
Followed the walkhighlands route starting from the layby and crossing under the railway to follow the path through the woods, i actually found this pretty hard going to start with as it was really warm in the trees but its not long until you are out in the clear and heading for the dam.
Really enjoyed the walk round the reservoir to start the climb up to ben cruachan and found it didnt offer to much difficulties.
We reached the top of Ben Cruachan in around 2hrs 45mins which was covered in cloud but it was slowly burning away and we were getting glimpes of the cracking views i had heard so much about.We sat at the top for around 20 mins and decided to head down to start the great ridge walk to Stob Diamh we couldnt have been 5 mins off the top when the cloud disapeared from the summit and we seen the rest of the route for the day,the weather stayed the same for the rest of the day with the odd biting wind on the ridge.
The views back to Ben Cruachan from here are something else and the walk to Drochaid Ghlas was brilliant,probably the best part of the day.
Found the Climb to Stob Diamh fairly straightforward and was surprised to pass so many walkers doing the route in reverse as im not sure going this way would be as good a walk.
I had really fancied trying to add in the corbett Beinn a' Bhuiridh as it looked so close but on the approach there seemed to be a lot of loose scree on the steep slopes so we decided against it and seen as james was now choking for a pint after going on about it for most of the way down and i had to be forced into heading down:lol:

A really enjoyable day and well worth another visit 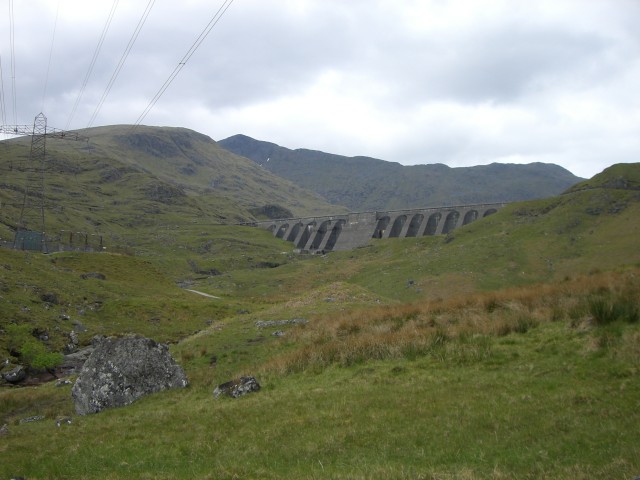 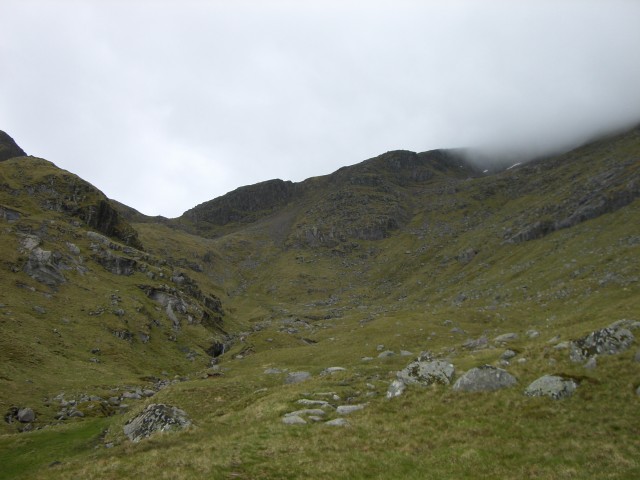 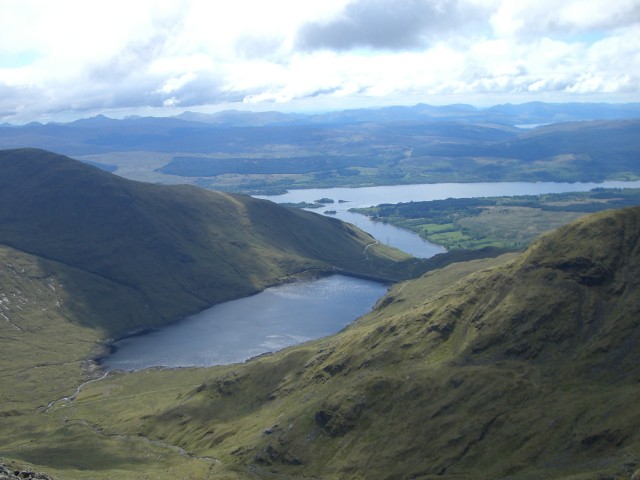 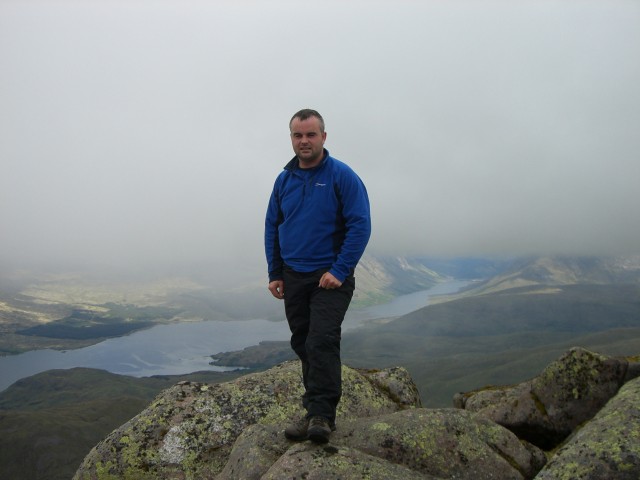 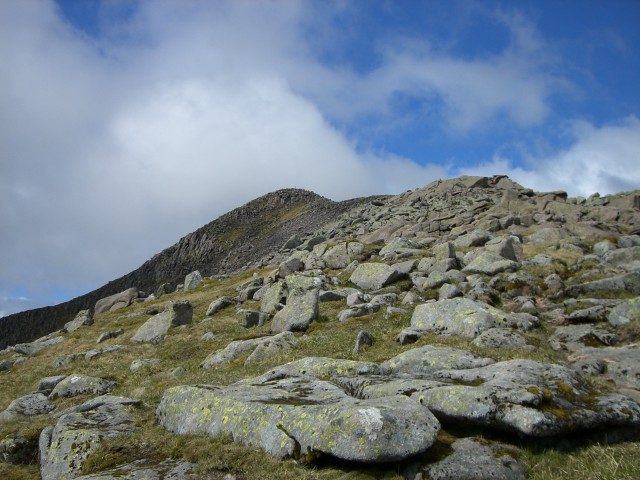 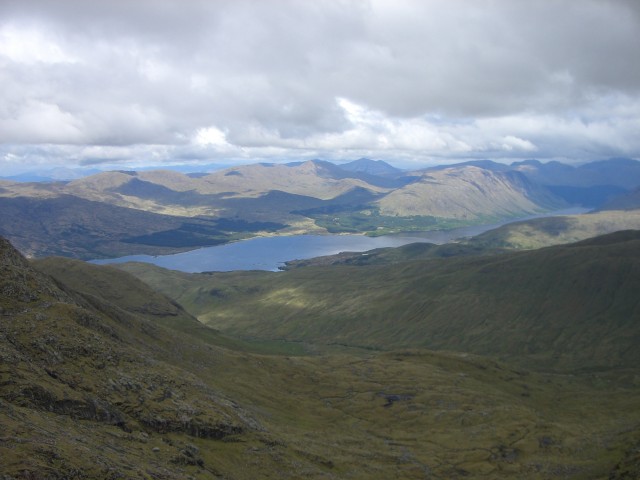 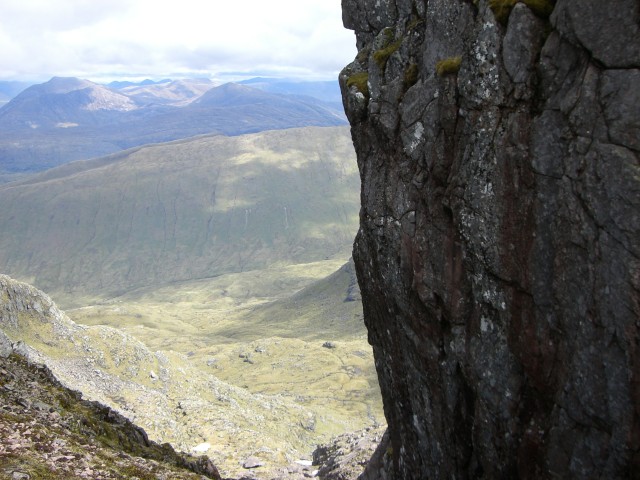 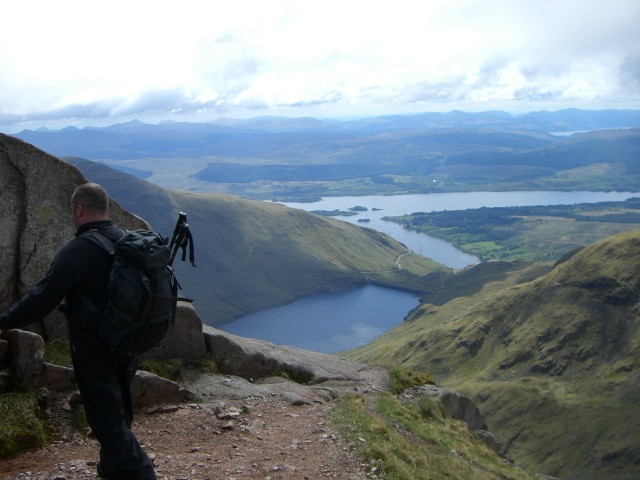 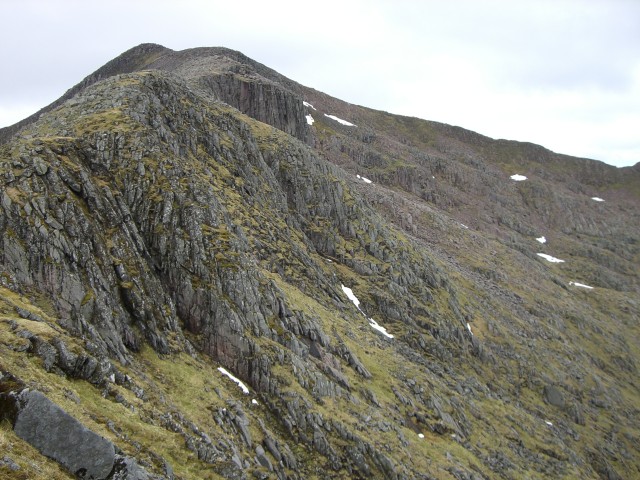 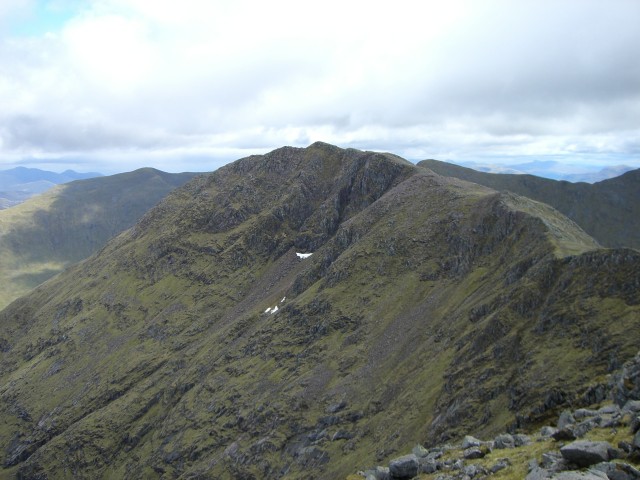 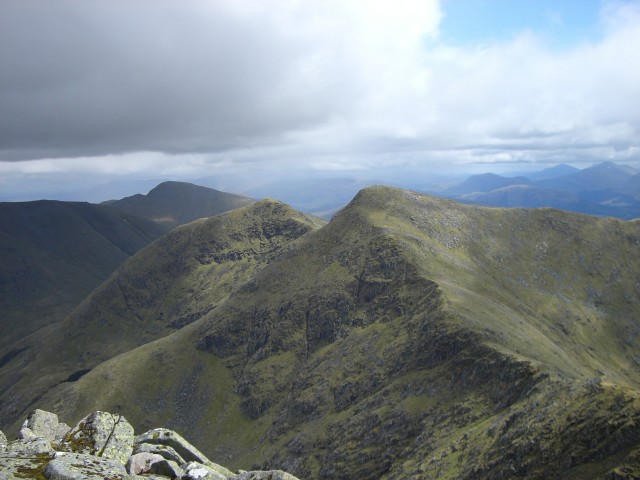 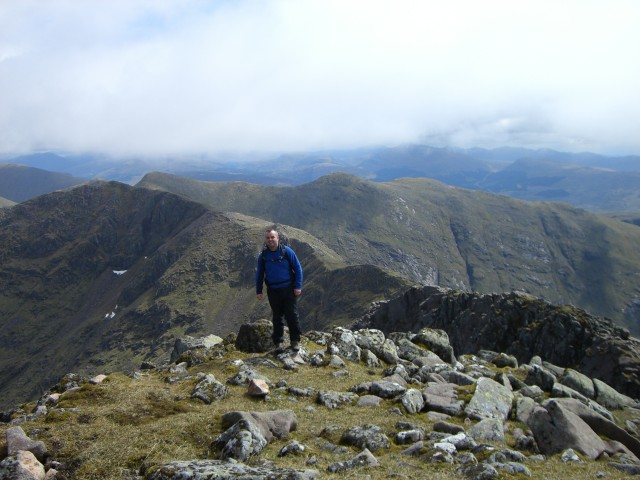 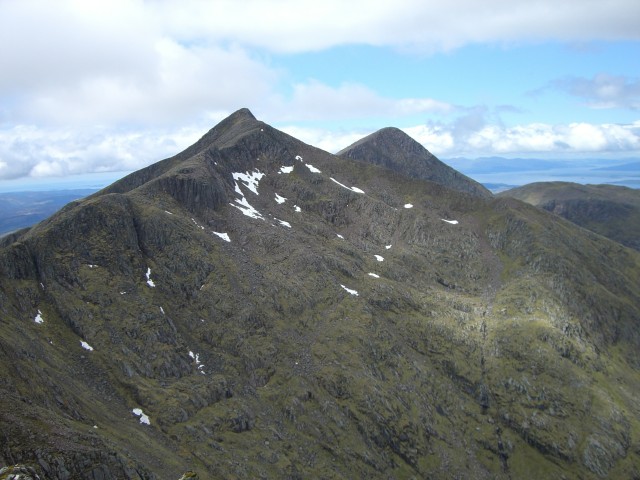 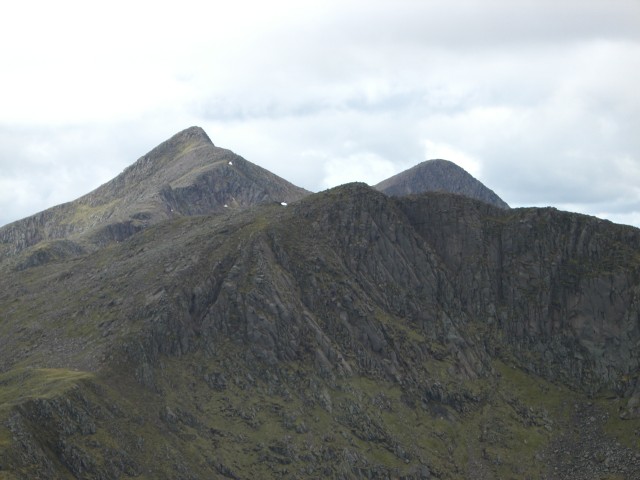 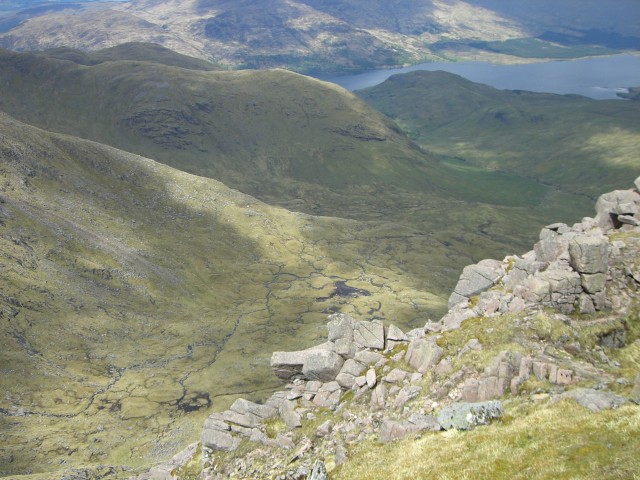 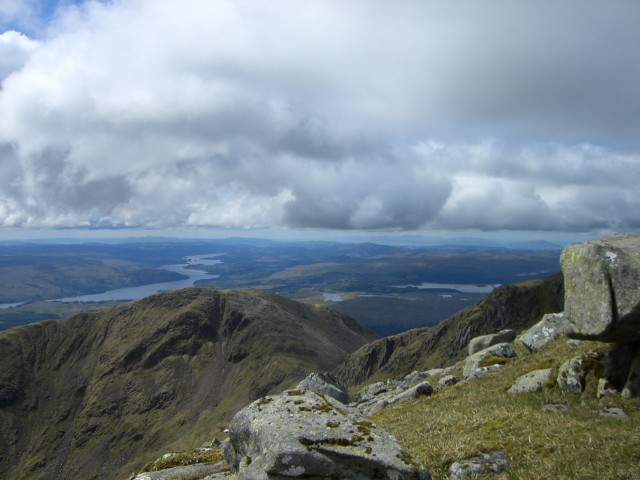 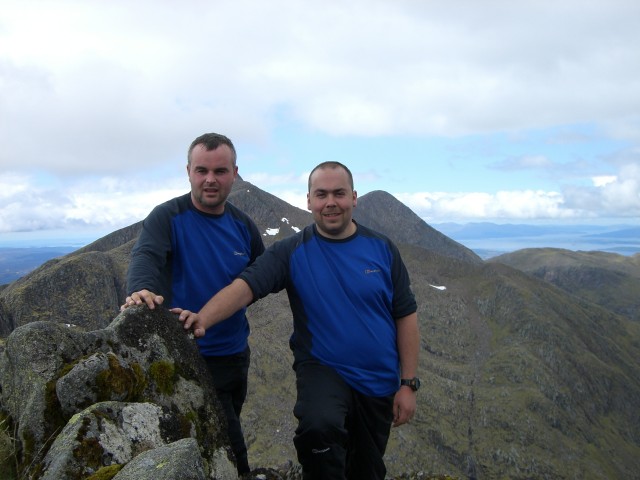 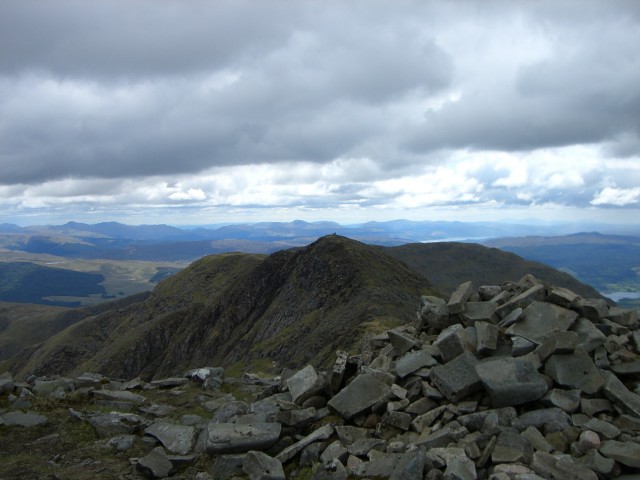 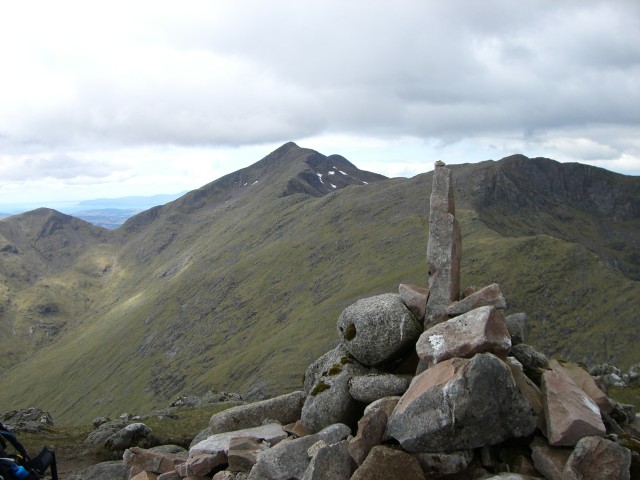 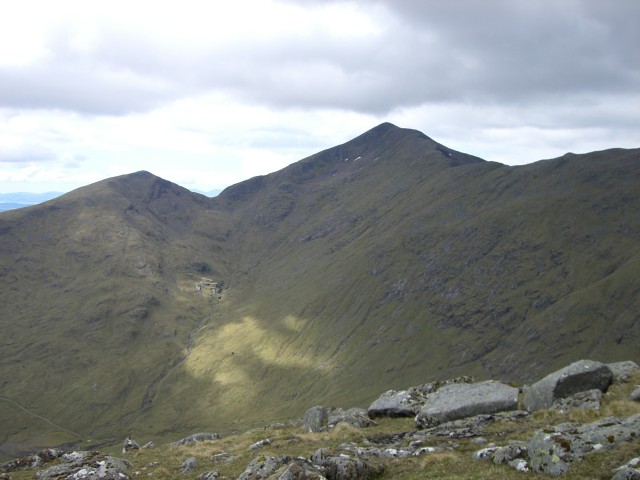 PS
A really good day was ruined with a 20min slow crawl through callander, i swear i saw the same person pressing the button at the lights twice before i got passed them, i doubt the chippy must have been to dear
i think its time for a new bypass

Hi Alan,
Nice report you have there with some cracking pictures. I nearly done the Cruachan horseshoe today but settled instead for the Ben Lui group. Isn't it always the same, 5 minutes after leaving the summit of Ben Lui, the mist lifted

The corbet can wait for another day

we've been there for 8 years now and we don't go out on a bank holiday due to the roads and queues. If we do go out its on foot or bike along the cycle path.

Hi monty, we were actually passed by one guy who was running up ben cruachan and i actually gave it a thought that it might have been you

i couldnt believe it when james took off his fleece and he had the same top on as me again as this happened the last time with the 3 of us. 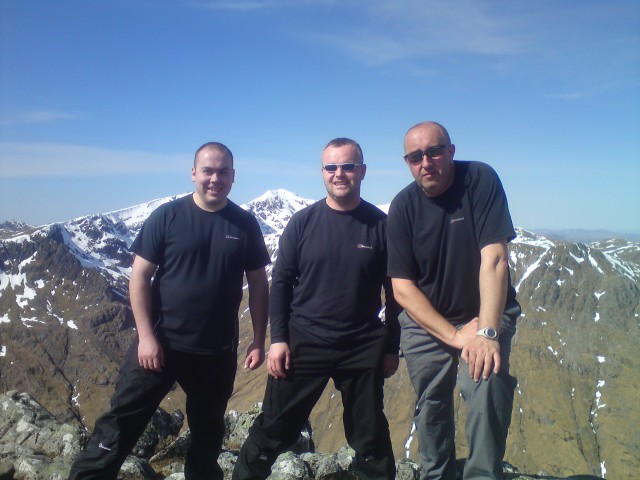 Thanks for posting this report as my little band of baggers & I are doing these two at the end of June.

Great pics of the ridge.

Was the parking easy i heard that since you can no longer park in the power station car park its a bit tight.

Thanks Jonny616
There were around 15 cars parked at the side of the road when we returned from our walk with others down the road
I did try to add a link to google street view showing you this but i cant get it to work, you should check it out just drag the marker over the road

Hi Alan and James,
it was a fantastic day on the hills, and timed perfect for a clear top on Ben Cruachan and the ridge walk.
Thanks again for taking my pic!
Here's to many more days like that!
Kevin. 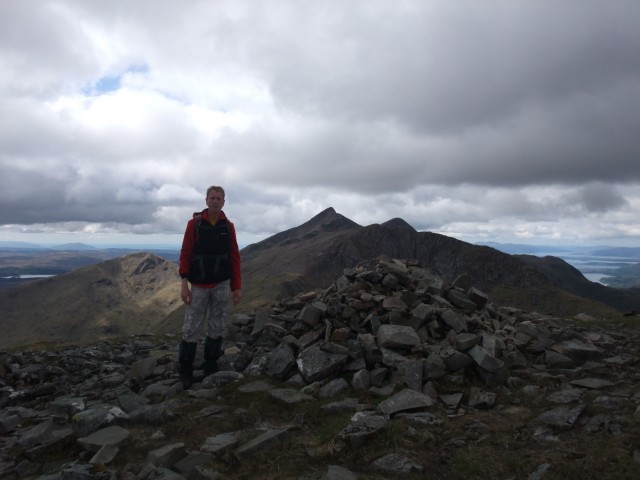 Yeh it was a good day the last i saw you, you were lying on your back on a big boulder enjoying the sun

I didn't think you could ever park in the Power Station parking? I thought you parked in the layby along the road near the underpass of the railway (near a station?)?

Good report and pics - nice to see it as we never did when we did it! I too thought the Corbett ascent looked scary from the ridge when we got to it and my walking buddy was also after his tea and his evening pint so we had to leave...

Callandar certainly is a nightmare for driving though (and I can understand it will be worse to live there - we have a steam railway which makes our village a nightmare of tourists and noise on a weekend) - I decided last time I drove through there, I'm never going to drive through it again - I take an alternative route now which is much quieter!

) where i thought the parking was limited but there was a few cars squeezed in there with some edging out to the road.
Im glad now i never tried the corbett as my legs have just recovered

must get out more

Well it's quite some day the Cruachan round so I'm not surprised! I'm probably going to do the Dalmally Horseshoe sometime in the next year or two so will do the Corbett then - you're welcome to join me... if you can stand whimpering cowards!

Whats the dalmally horeshoe again ? im sure i read about this somewhere, is it stob daimh and the tops and does it include ben cruachan.

you're welcome to join me

It's the eastern end of the Cruachan horseshoe - doesn't actually include Cruachan itself... looks a nice round though... I also need to do Taynuilt Peak at the opposite end of the range too - really want to do that one - seems awful to miss out such a great peak!

alrite mate,good report feels like im there again reading that and looking at your photos

,i only wore that t-shirt cause thats the only one i could squeeze into,must cut out the beer at weekend and do more of this stuff

alan s wrote:I read a report on these hills by Graeme Dewar recently with the title nemesis nailed and i cant think of a better title for this walk today as i have planned this route so many times and always cancelled due to poor weather so was really chuffed to get this done today and glad i did as it was a cracker.

Yeah, I can't remember how many last minute call offs I'd had with this route Alan before finally "nailing my nemesis" back in March. In the end, I'm so glad 'cos it was definitely one of my top 5 hill days. Very different conditions when you did it, but nice to see that side of it.

alan s wrote:Hi monty, we were actually passed by one guy who was running up ben cruachan and i actually gave it a thought that it might have been you

Did the guy have dogs with him? When I did it, we were also passed by a guy running up, quite near the summit of Cruachan. He said it was the first time for one of the dogs, but the other had been up many times - can't recall exactly how many times he said. I got the impression he was local and this was his rather hardcore dog walking routine!