Decided to try this via a train journey. First time I've been to Huntly station and the first obstacle, parking for the 7.12am train to Inverness, proved to be no obstacle at all.
An hour and a half on the route to Inverness was spent pleasantly enough watching the world go by. Then there was a bit of tension at Inverness on hearing that the Kyle of Lochalsh train was delayed. This wasn't looking good for getting the 3pm train back from Achnasheen.
Arrived at Achnasheen half an hour late, leaving me four and a half hours for the walk with the 6.25pm train as a plan B.
Set off up the WH route and decided to cut off north towards the more easterly burn, having read a few folks' opinion that staying beside the first burn too long leads you to more boggy ground. Having tried the alternative on the way up I'd definitely recommend this change of course -the ground is pretty good compared to what I experienced on the way down. No great hardship either way though.
I caught up briefly with a couple ahead of me by virtue of my "shortcut" but they were soon way ahead of me again. I did try to keep pace with them for a wee while but it was clear that we had different fitness levels! It was good to have a pacemaker of sorts though what with my aim of catching the 3pm train if possible.
The couple had been here before and confirmed to me my suspicion that I could possibly contour up the side of the southward projecting spur in front of us. Whilst they opted to go over that spur, I took the more direct option of aiming on a diagonal for the low point on the main ridge. The going was pretty good I have to say though it was a little dispiriting to see how far ahead the couple had got and how far away the summit ridge seemed. I am nothing if not donkey like though in my quest for a view so went at it bit by bit taking short rests and feeling little energy in my legs.
Still, I made it fine onto the ridge and that did the usual psychological trick of producing energy from nowhere. Wow, what a spectacle the cornice adorning the northern slopes was. I took in the views and made my way slowly up to the summit where I met the couple again. The MWIS forecast of freezing level rising to 1000m was borne out by thawing ice patches all around and the fact that I hadn't had to put my hat on at any point. It felt positively summery in fact.
Quite a view point it has to be said -good and / or unusual views of Torridon, Fisherfield, Fainnachs and of less familiar land to the south.
I made good time on the descent -really good going for most of the way. It was a mistake though to try to follow the upper part of the path at the foot of the hill; quite slippy, so back on to the heather and grass.
Made it down to the station with forty minutes to spare. 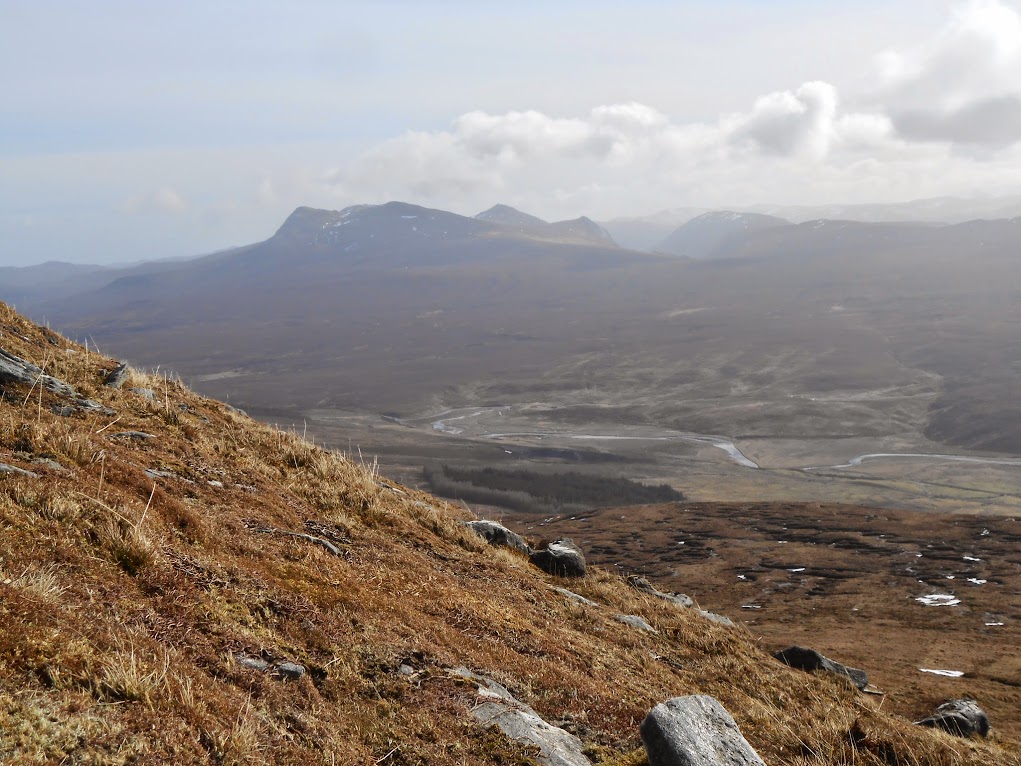 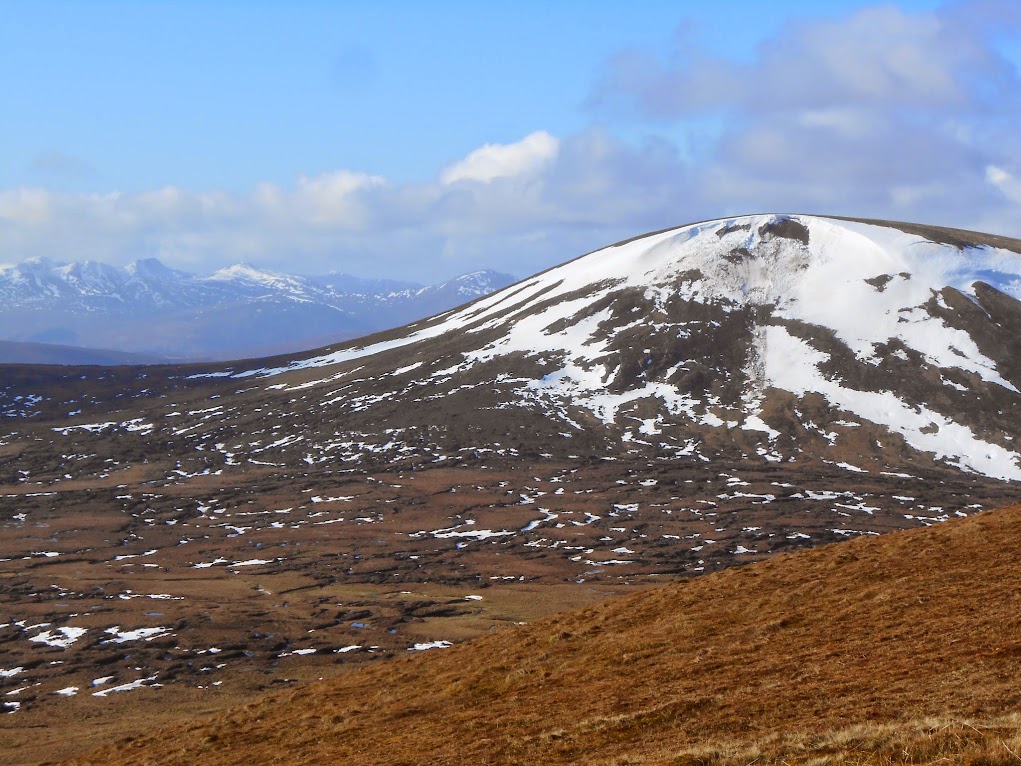 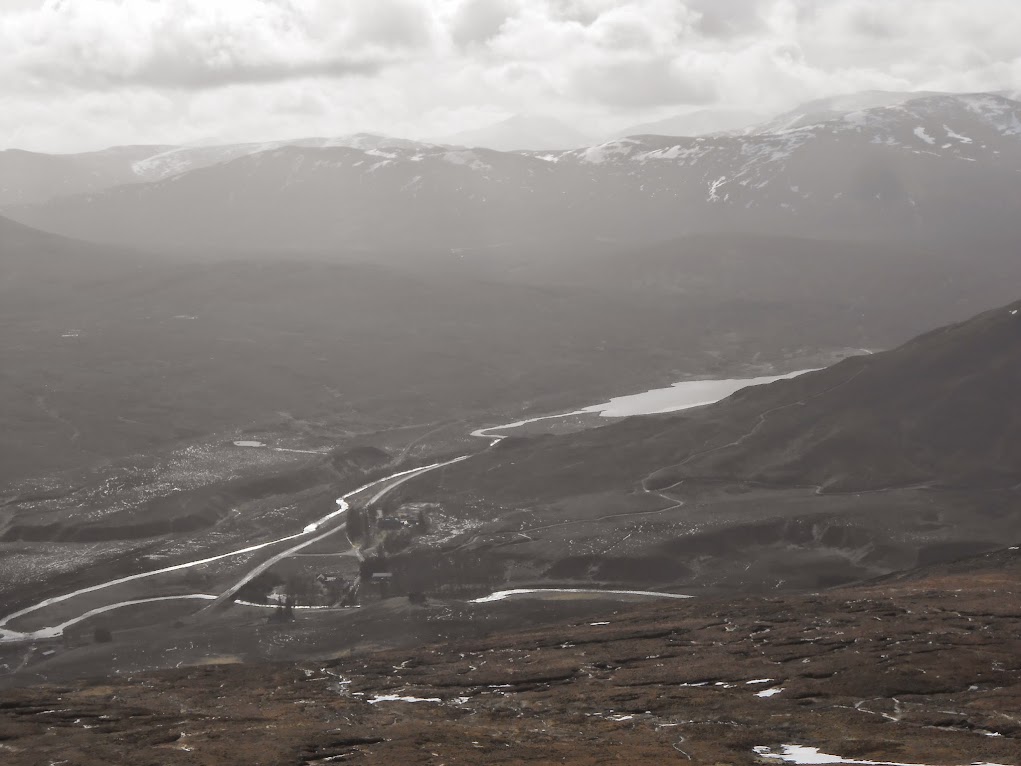 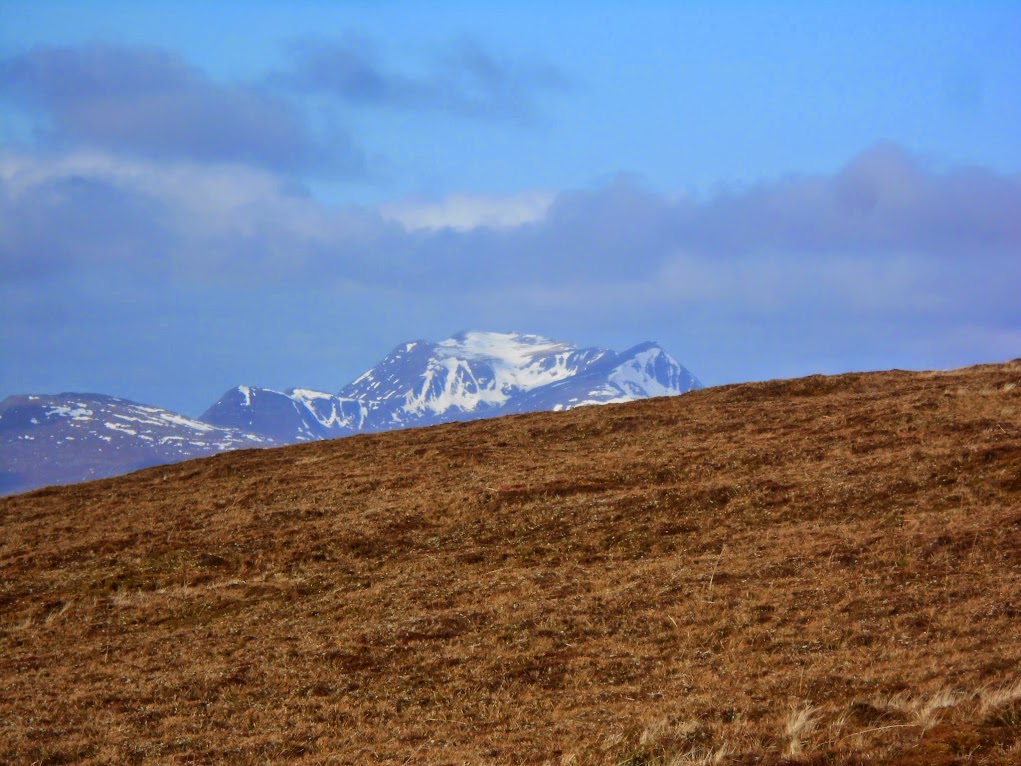 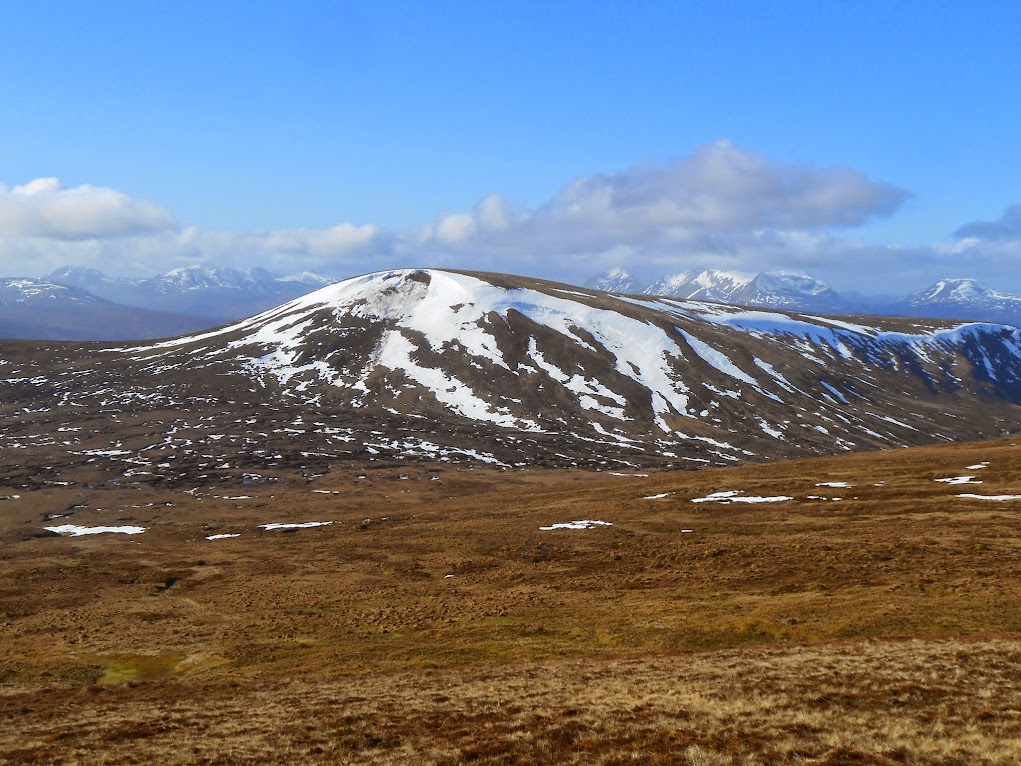 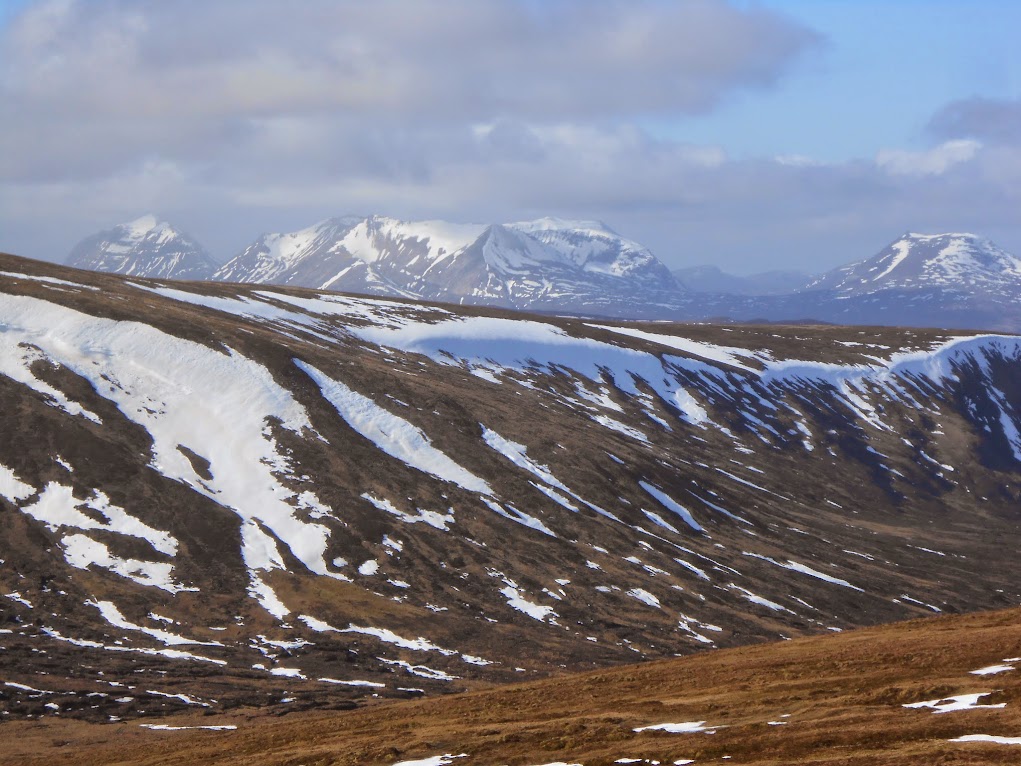 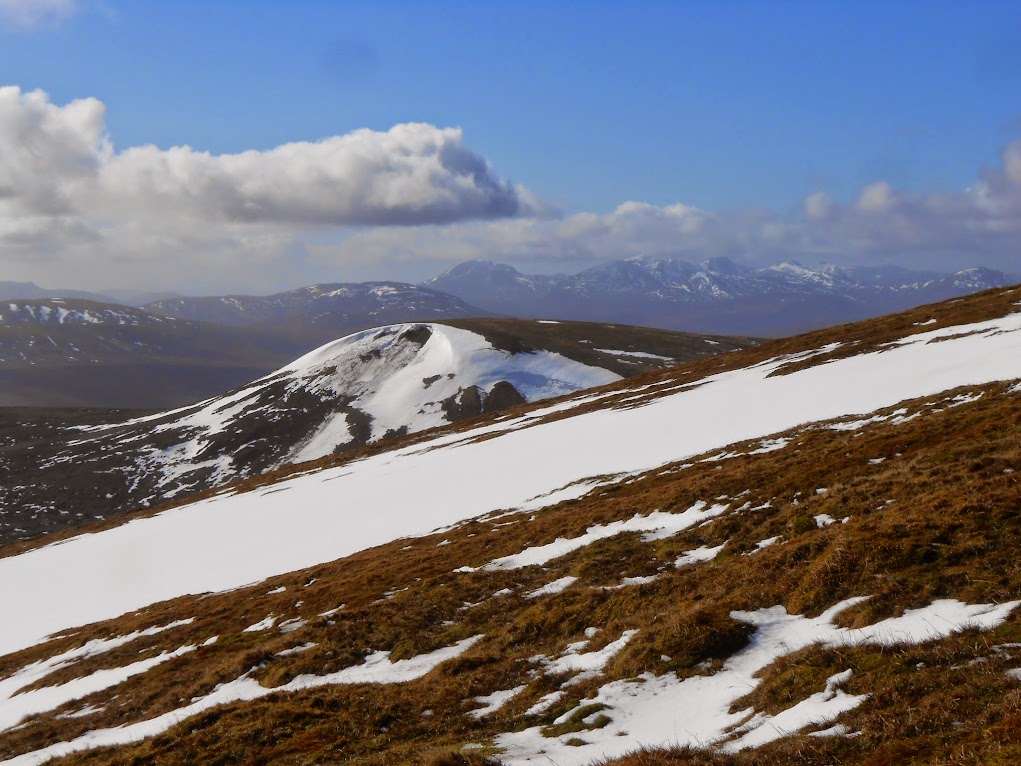 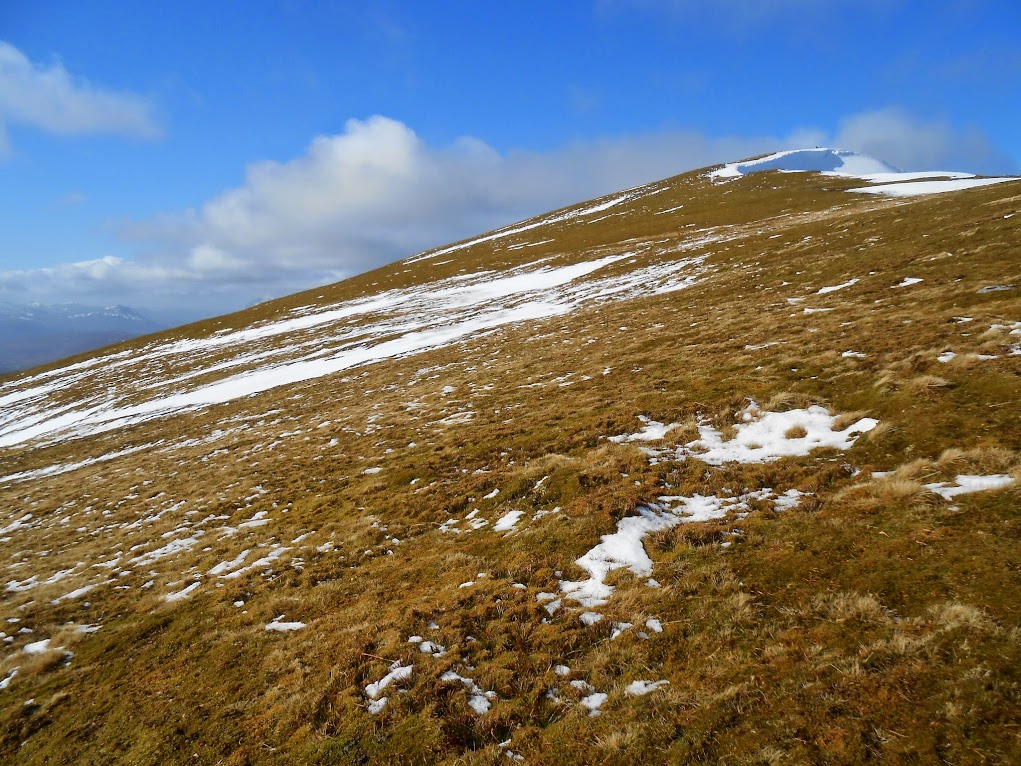 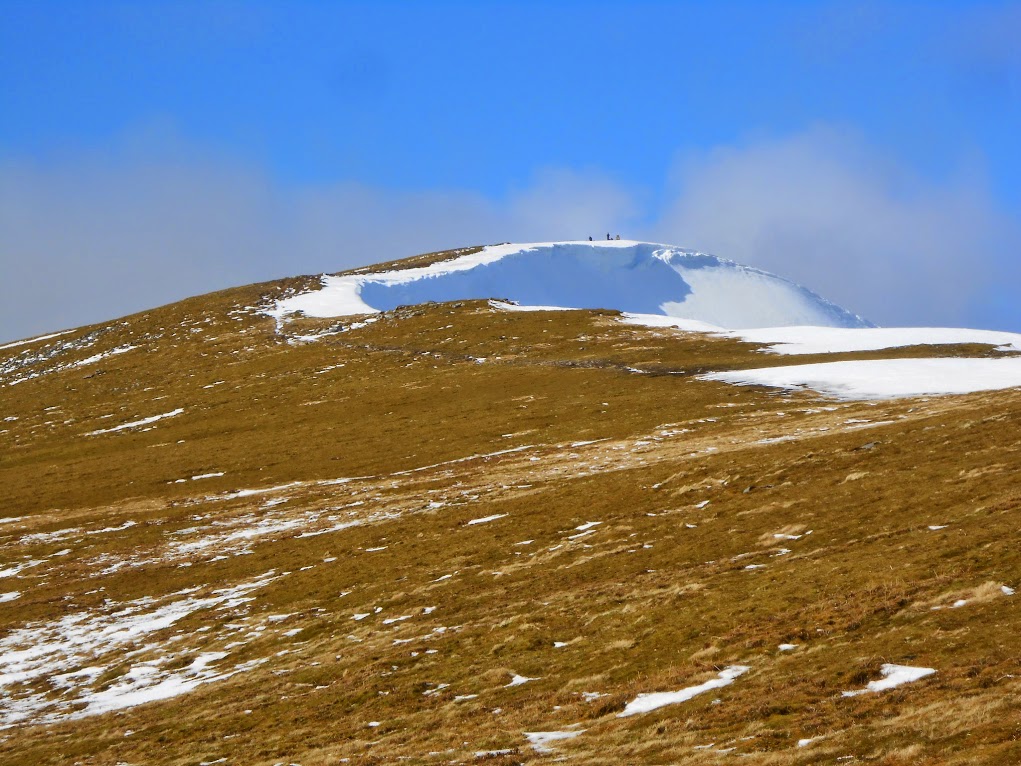 couple at the top, seeming a long way off 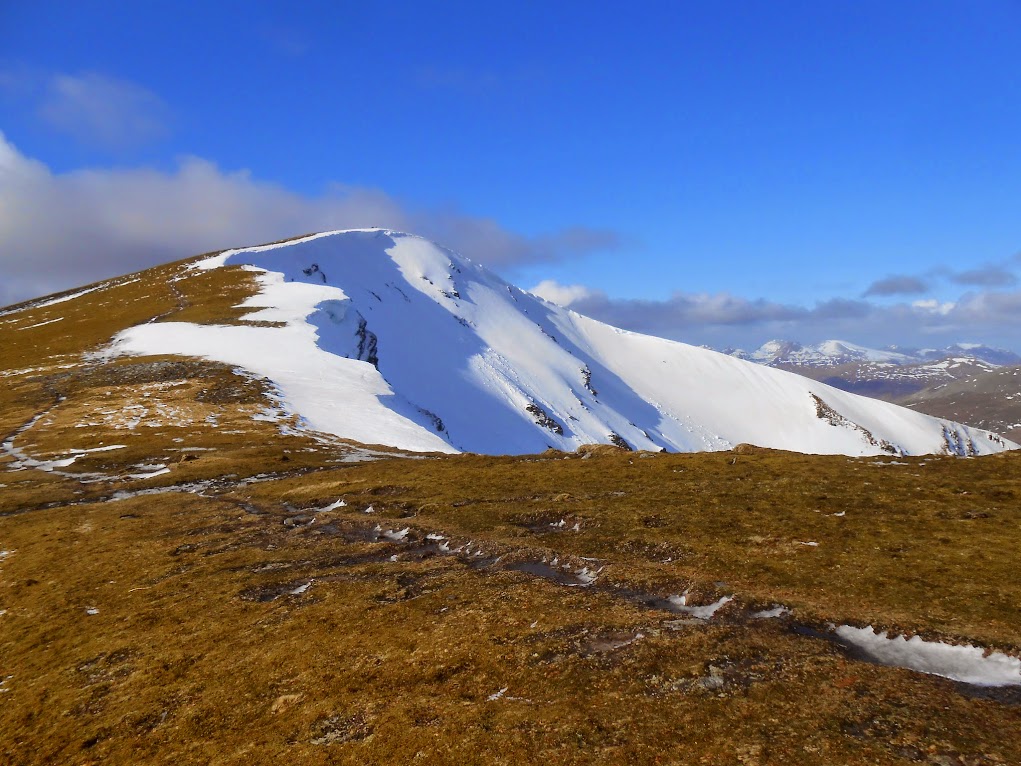 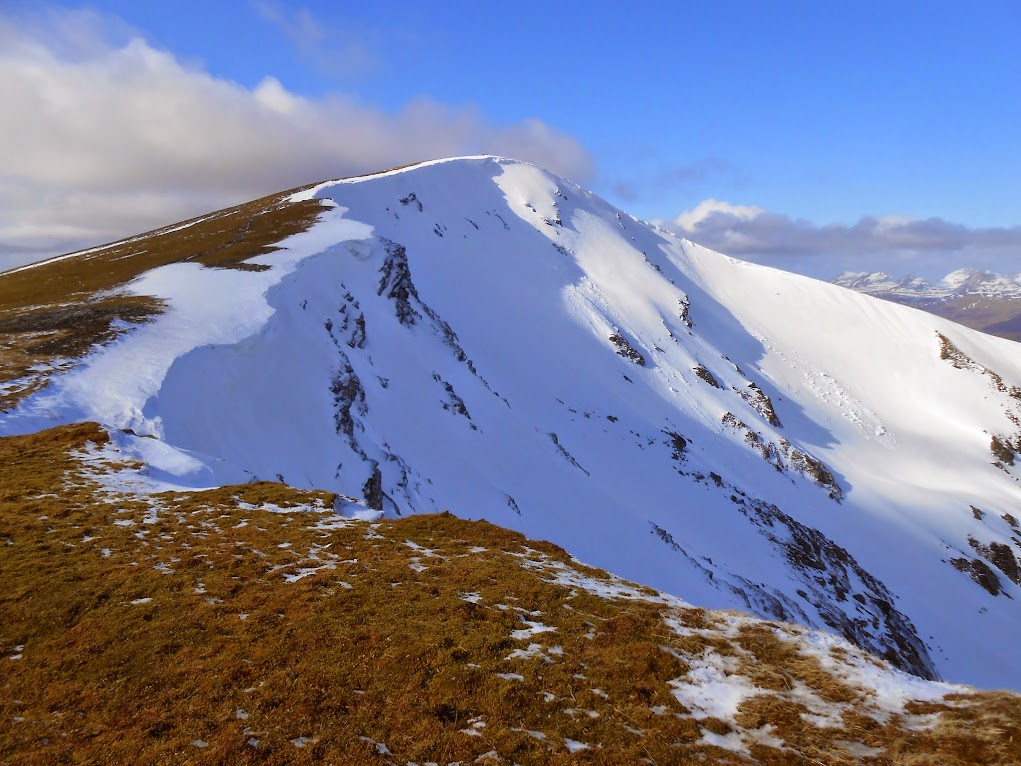 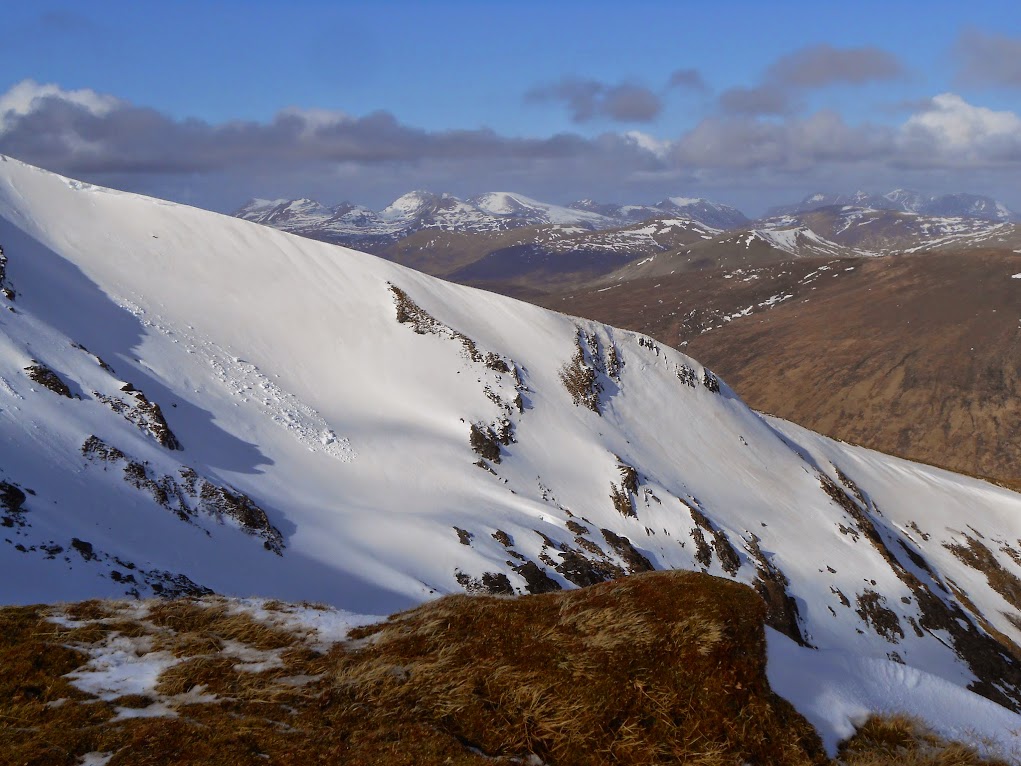 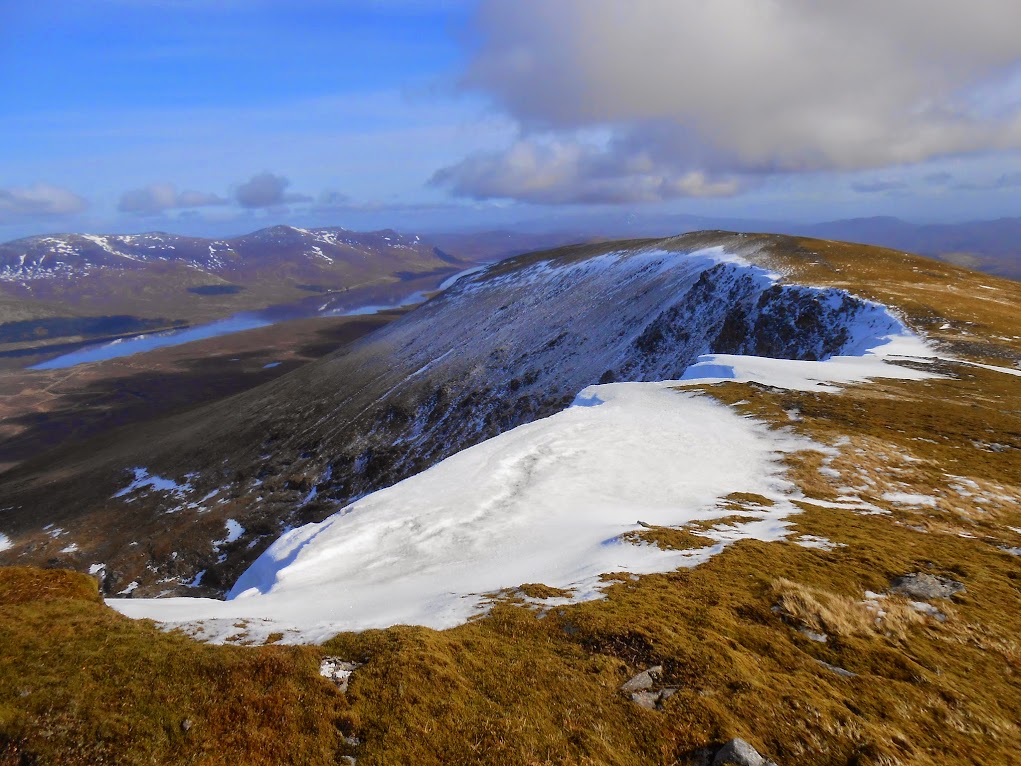 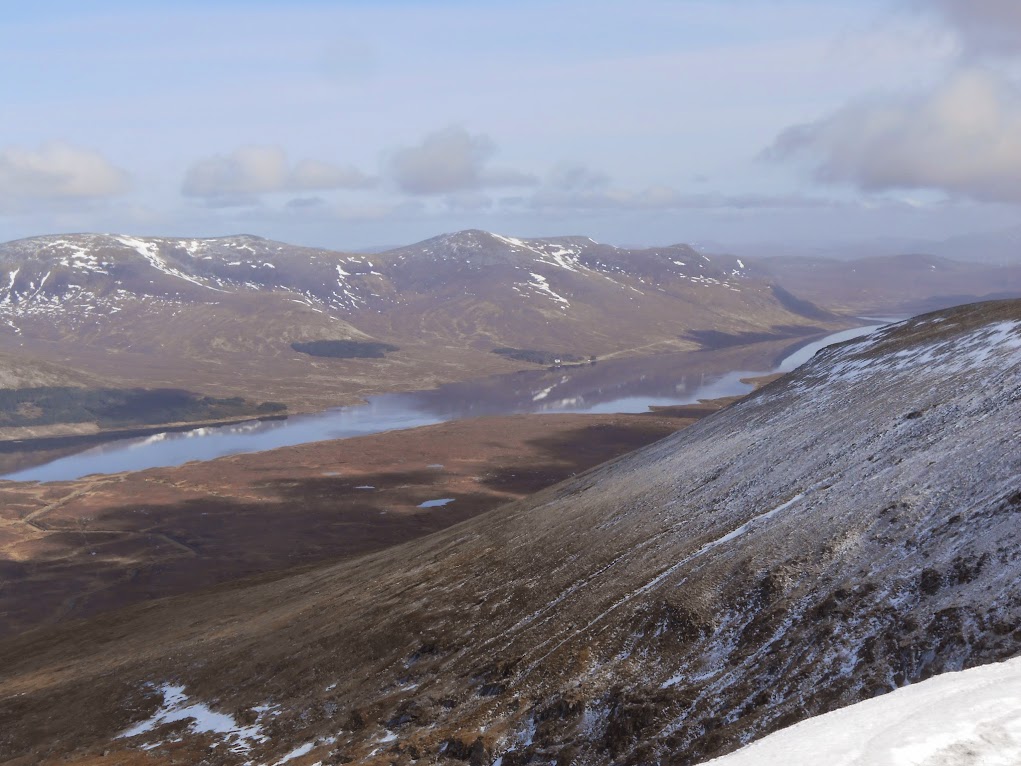 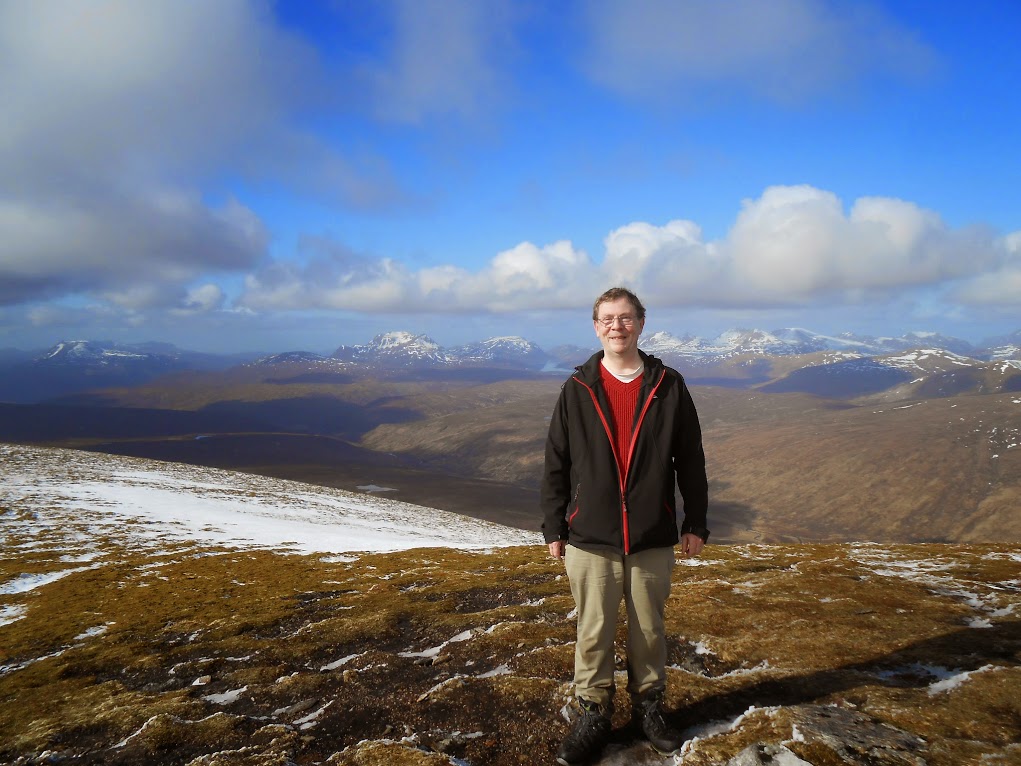 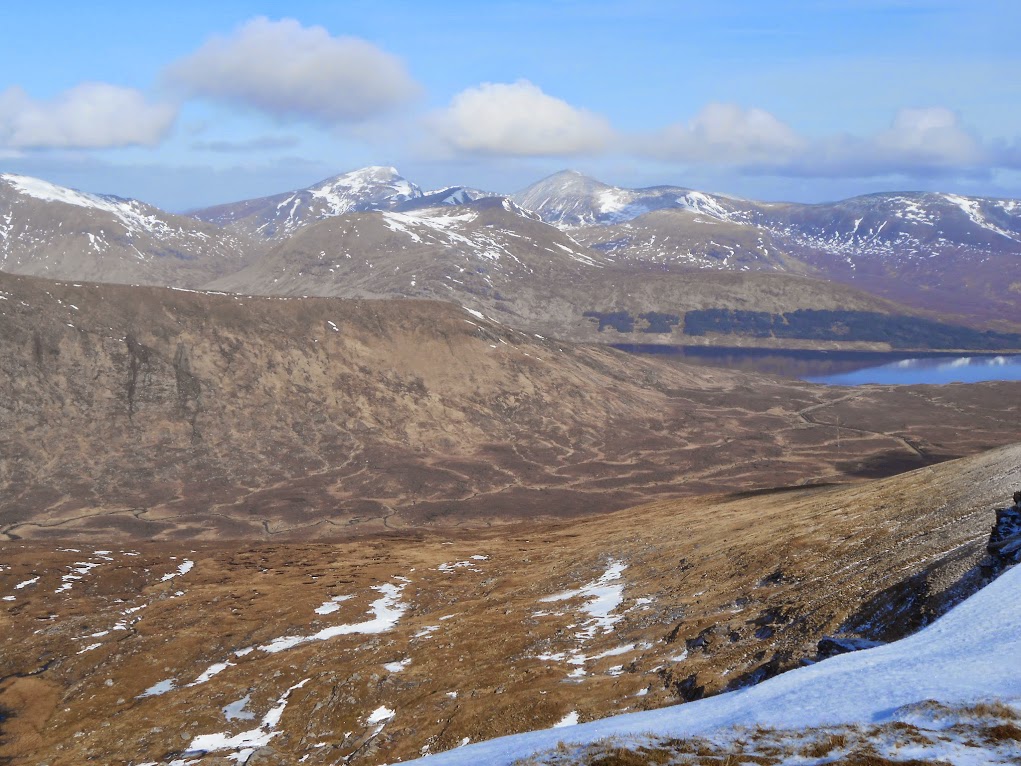 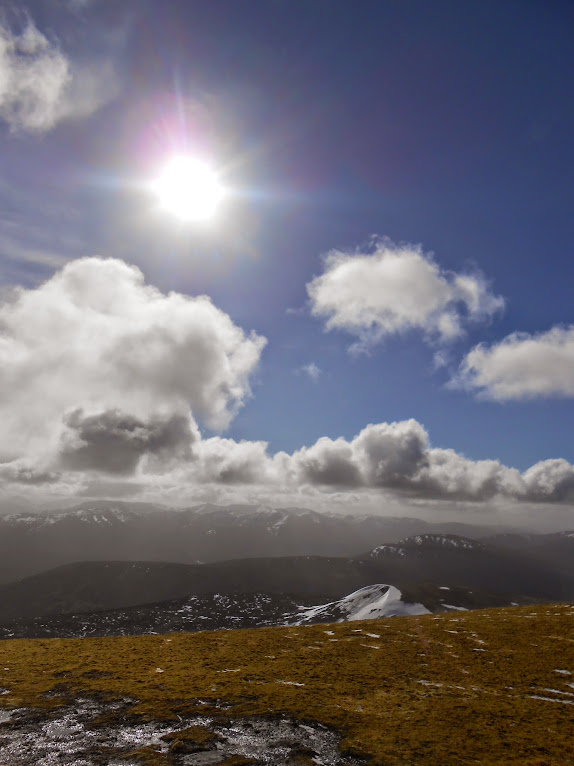 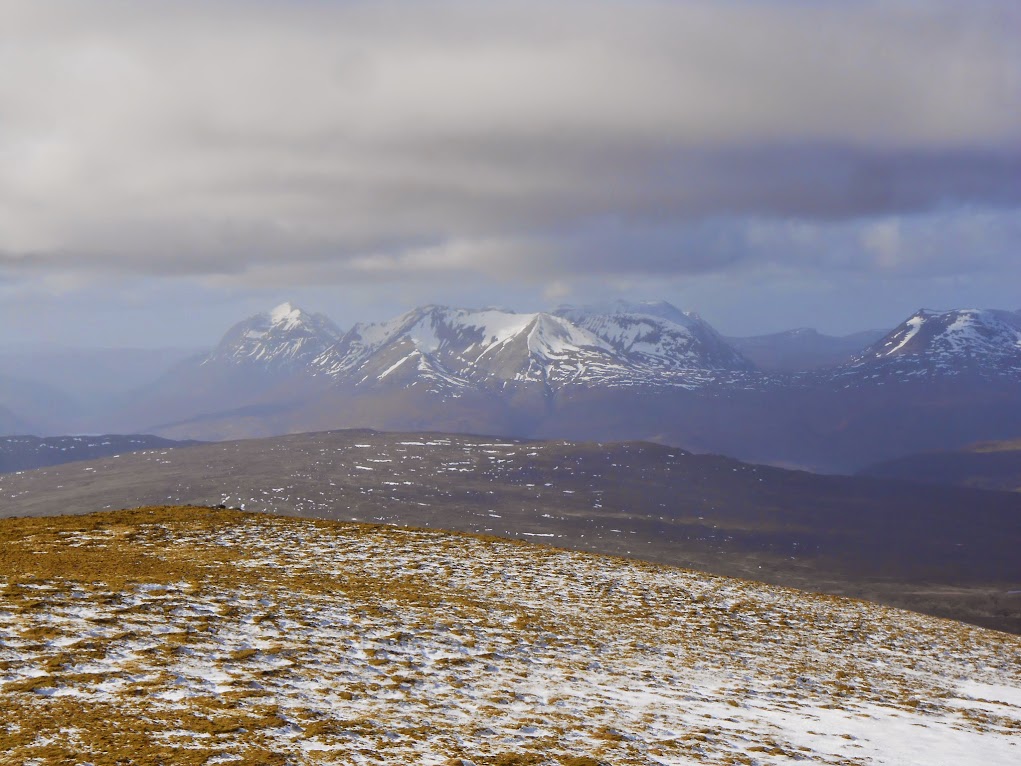 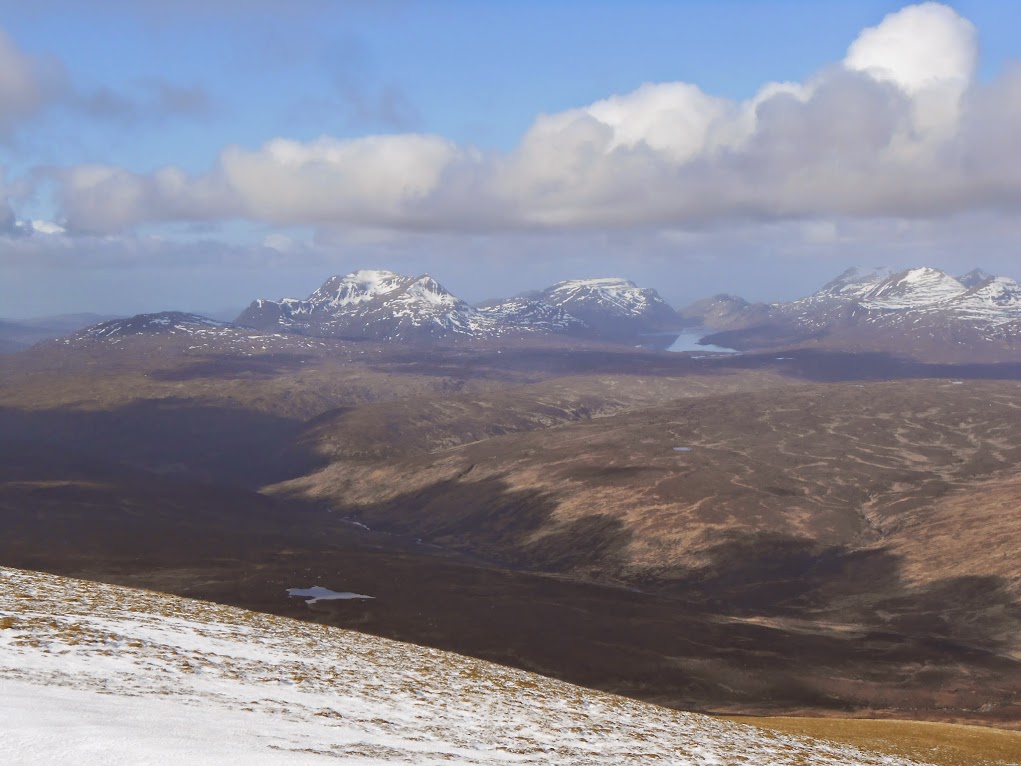 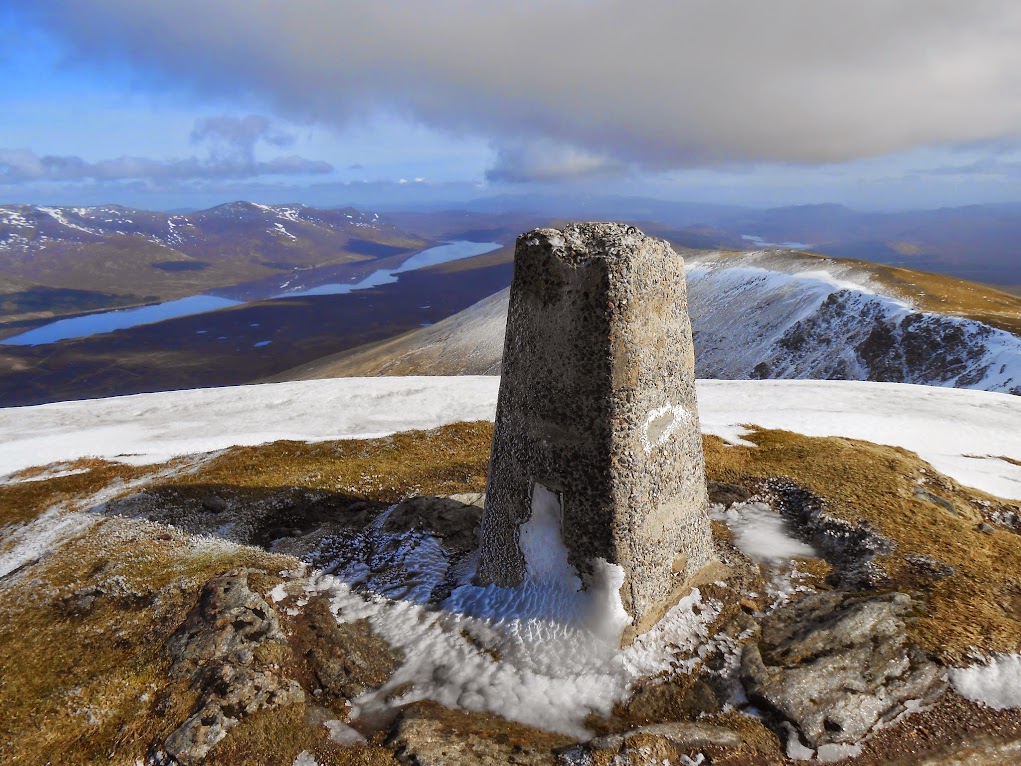 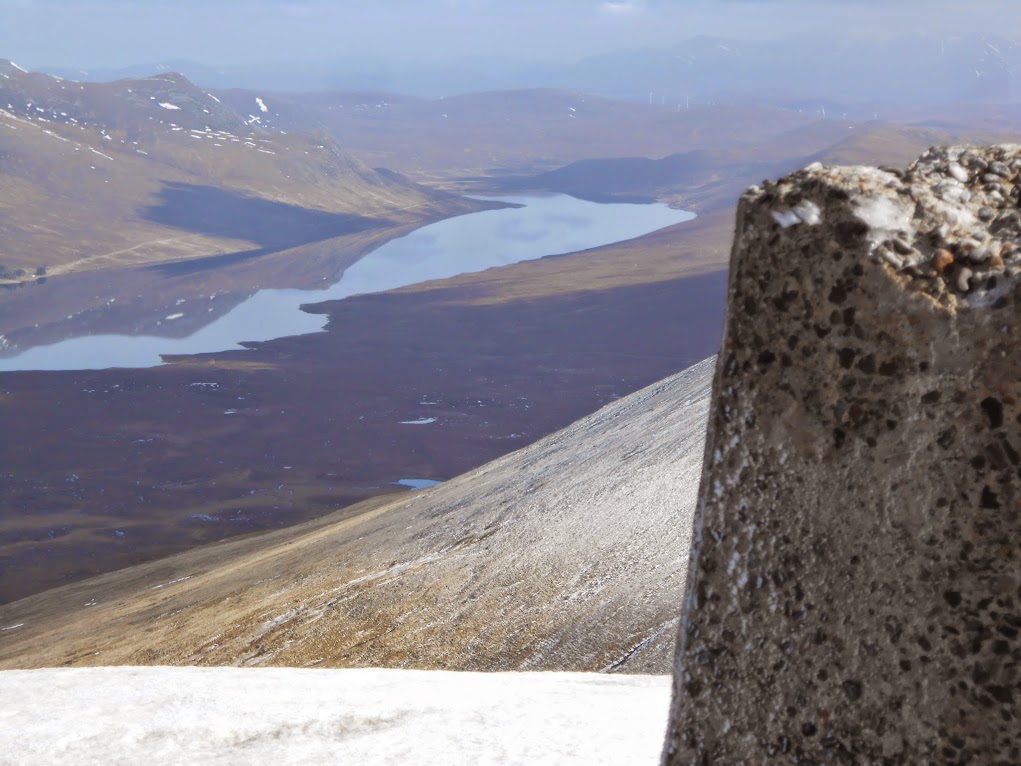 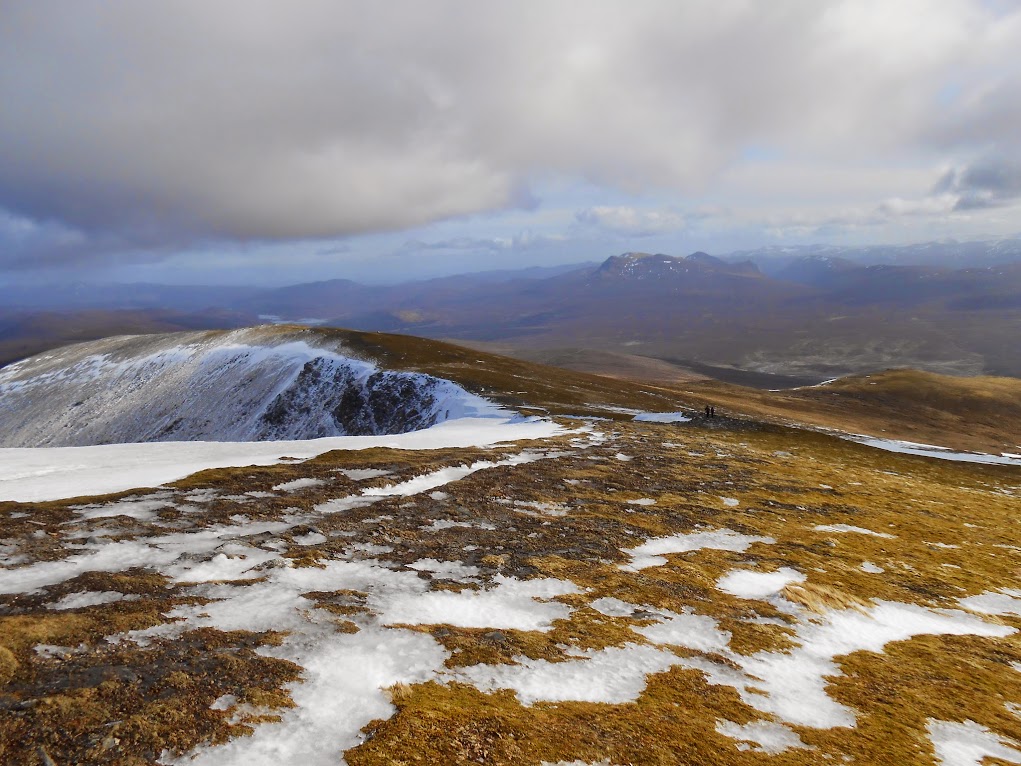 Hello,
great report! I love the contrast of the snow and the grass, almost green!

I will definitely add this mountain on my to do list, thank you:)

Thank you for your positive comment! A veritable avalanche of great snowy spring reports just now brought on by the fine weather so easy for things to disappear unless at least one kind soul stops to say something.

saw nothing myself when here, just rain and clag

Its a long, long time since I was up here - your photos make it look great, and thanks for the update on the snow conditions.

Good to see the use of public transport onto the hills, I'm always worried about missing the last train home

I have to say this is not my favourite hill, but you got a great day with great views. Super pics!

rockhopper wrote:cracking day for it - shows just how good a viewpoint it is

saw nothing myself when here, just rain and clag

I might just be suffering west coast sensory deprivation but yes it seemed a great place to survey that part of the north west from.

Thanks, but point and shoot cannot fail in such weather.

Huff_n_Puff wrote:Its a long, long time since I was up here - your photos make it look great, and thanks for the update on the snow conditions.

Good to see the use of public transport onto the hills, I'm always worried about missing the last train home

I was plenty worried about the trains. The one in from Kyle was up on the board as being delayed by two hours! A lorry had hit the rail bridge at Achnasheen apparently but for some reason that didn't affect my train.

Camera never lies except that ordinarily it does tend to lie its backside off. However, my particular camera's zoomy pics are fairly representative of what you see when squinting at the horizon. So Fionn Bheinn pretty good in that respect I thought; the surrounding groups of hills were pretty easy to make out, not just wee dots on the horizon that emerge on photos as single pixels. Could be the varifocals of course. I'd like to think there was a reason for spending all that money.

AnnieMacD wrote:I have to say this is not my favourite hill, but you got a great day with great views. Super pics!

It is indeed a bit of a lump but a lump with a view.
If the hills could comment back here this one would probably say to me well you're a bit of a lump yourself so I won't be too critical of its aesthetic shortcomings. Do like the views to Torridon and Fisherfield but also north into the Fainnichs. Still trying to untangle that view into the various summits.
A walk that was probably made by the dazzling cornince more than anything but felt good to me to make a return to the vicinity of the west coast and, touch wood, an ongoing return to fitness...

Can't fault this hill - fairly short walk with good views of Fisherfield, and easy to reach without a car as well

. The Ledgowan makes a handy waiting room if you have time to kill as well - there certainly isn't a great deal else in Achnasheen!

Certainly looks much more than just a lump. A Lump with a view possibly.

malky_c wrote:Can't fault this hill - fairly short walk with good views of Fisherfield, and easy to reach without a car as well

. The Ledgowan makes a handy waiting room if you have time to kill as well - there certainly isn't a great deal else in Achnasheen!

I see there's a bunkhouse at Ledgowan too. Not that it looks like much of a base for anything other then Fionn Bheinn, unless you have a bike or car with you or you like walking really long distances. Still, I enjoyed letting the train take the strain so much that I am not ruling out buying a bike but I'll see if I can find something else bikeless first.