Sometime in the depths of winter we had hatched a plan to get wild camping this spring. So after copious internet research, careful financial planning and flogging the family silver, our new home from home had been purchased. With a promising weather forecast, we packed our bags for a springtime expedition and headed into the quiet wilderness behind Dalwhinnie. Having enjoyed a great, and memorable, trip to the area to bag the Aonach Beag hills last summer we were looking forward to camping in a beautiful and remote location. 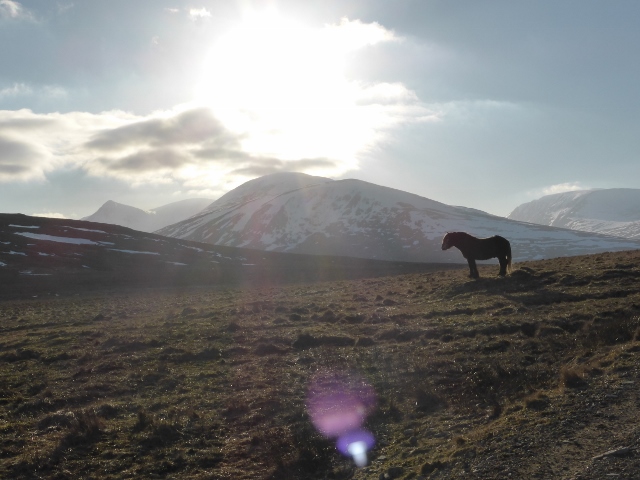 It had been the massive sprawl of Ben Alder that had caught the eye at the time and as we left Loch Ericht behind and walked up passed Ben Alder Lodge it did so again.
We had set off from the car around 2.30pm on Saturday, having made the executive decision not to carry in crampons. We were conscious of saving weight and space for our first wild camp and since we had carried crampons all winter without using them, they were sacrificed in favour of other essentials such as a bottle of Jack Daniels. Turned out we needed them more than we needed the booze.
After 3 hours or so, we were close enough to pick out the fine details of Ben Alder's ridges, looking very icy and packed with thick snow. 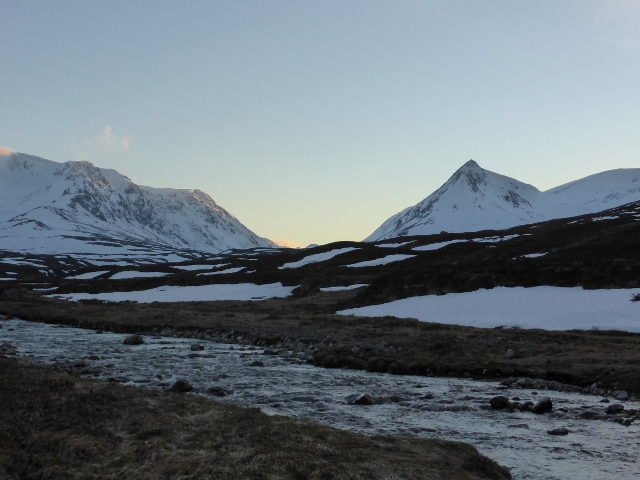 We set up our tent on a fine little spot about 200m past Culra Bothy and settled in for the night. 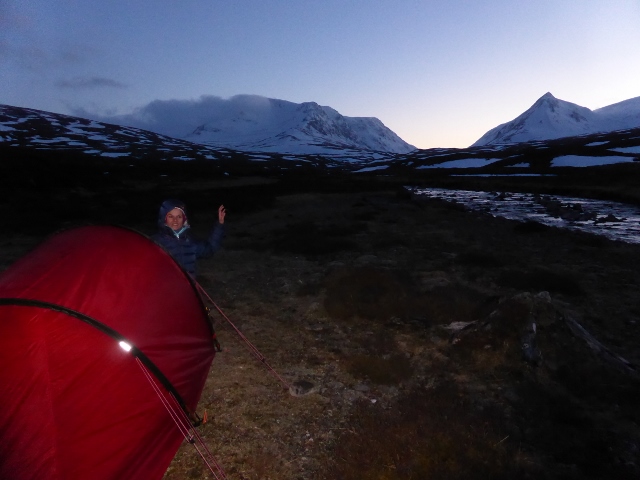 Under a clear sky, the temperature dropped significantly and inside our abode I was positively Baltic. 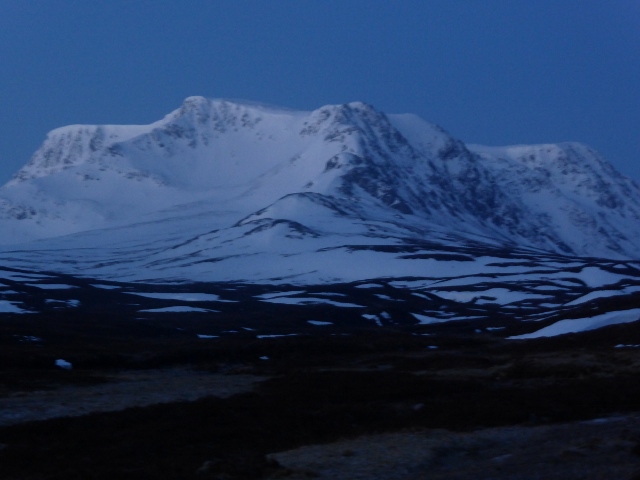 Although the tent is definitely a 4 season one, my sleeping bad isn't so I emptied my rucksack of all spare clothing and layered up as much as I could: spare socks make for "handy" emergency mitts, I discovered.
In the morning, we woke early and peeked out to see a cloudless sky ahead,perfectly framing the white mass of Ben Alder and Gael Charn. Frost on the tent suggested a crampon-less approach up the Long Leachas ridge would be impossible but we were open-minded as we finished breakfast and headed up the path around 7. 30 am. It was just great to be out in such beautiful conditions and in perfect solitude. The only sound other than the crunch of our feet was the occasional grumbling grouse whirring out of the heather nearby. We got as far as the river crossing when we realised we would need to change our plan- in our 3 season gear, both of the big ridges looked impenetrable. Common sense meant a change of plan and the alternative (devised by Leonide) was to tackle the much more straight-forward Bheinn Bheoil first and to leave Ben Alder for another time. All the way onto Bheol's ridge our attention was drawn to Ben Alder, clad in so much more snow than we had expected. Such a shame that it was out of bounds to us...or was it?
Dodging patches of ice as the slope steepened, we arrived at the summit of Beinn Bheoil without any difficulty and from our vantage point, an ascent of the more southerly Sron Bealach Beithe side of Ben Alder looked very doable.
An easy descent to the bealach left around 250m to negotiate to take us on to the main plateau. Ice axe was needed to cut steps at times on the way and plenty of caution was required although the views over Rannoch Moor and far beyond were breathtaking. A perfect winter's day. In Spring!
Massive cornices hung over Ben Alder's cliffs and the plateau was a skating rink. We both lost our footing on the way over but with due care being taken we made it to the summit cairn in one piece and soaked in the amazing views in all directions. The remoteness of these hills comes sharply into focus when you pick out other mountain ranges far away: Nevis and co. to the west, the Monadliath to the north, Lochnagar and others past Beinn a Ghlo to the east and who could miss Schiehallion pointing the way south.
With the terrain still treacherous to our uncramponed feet, we felt that a further traverse of the plateau and a descent of the Long Leachas was not sensible. Discretion is the better part of valour apparently, so, whilst it would have made for a brilliant route off the hill, we opted to retrace our steps and walk out beside the Allt a Bealach Beithe and along the east side of the loch, which was completely covered in snow. We really had awesome views for company, dwarfed as we were between the slopes of Ben Alder and Beinn Bheoil. This really would be a special wild camping spot we mused as we headed somewhat regretfully away from the hills, joined the path and returned to camp. Now the long and winding road back to Dalwhinnie lay ahead and my feet were already protesting at the thought of it. Just the small matter of 15km to negotiate back to the car in 3 season boots that hadn't really been worn in properly from last year. As we made our way back to Loch Ericht my gait changed from a steady stroll, to a hirple then a hobble, and by the time we were passing the Lodge again I must have resembled a hybrid of Grampa Broon and John Wayne from the back. The last time I had been on this road, I was pushing my bike having broken the chain back up at Culra Bothy which turned that trip into a real epic- this day was taking on a similar aspect. As I slowed down to a glacial pace, desperate thoughts flitted by: maybe we could pitch the tent and crawl out tomorrow, maybe we could ride one of the Ben Alder ponies to freedom? All was saved by the generosity of one of the workers from the estate who took pity on us and gave us a lift all the way to Dalwhinnie Station. As she drove us over the remaining ups and downs by the lochside, I probably shed a secret tear of joy. Many thanks!
On the way back home, we reflected on a great first wild camping expedition: you make plans to the best of your ability but you are never quite sure what the hills hold in store. Maybe that's what makes them so special.

You certainly had the day for it.

I harbour ideas of doing these in a single trip - the full walk in, do the hills and then walk back out again in the day

Good luck, think you might need to re-sole your feet afterwards

Was reading your report of Sgor Gaibhre and Carn Dearg from Rannoch today as quite fancy something similar this weekend- how long did it take? I fancy walking up to Beinn na lap on Saturday then a camp and walk back via those on the Sunday but hoping that wouldn't be too strenuous.

Sounds like a good compromise route and what luck to get a lift for the last bit of the walk out! Stunning pics.