our_route.gpx Open full screen  NB: Walkhighlands is not responsible for the accuracy of gpx files in users posts
The day started quite sunny which was promising, and looking round Glencoe only a few of the tops had any cloud on them but with the heat of the sun already I knew that wouldn't last long. I took a shot looking back through the pass, and then up Coire na Tulaich where I was headed, to tackle Buachaille Etive Mor. I was a little bit worried about the snow I could see at the top as I didn't know exactly where the path went. Turns out the path to the top is just to the right of the snow in the picture. It started getting warmer so I shed the fleece and slapped on the suncream, and it was only 9am! It was a long haul up but there is a good path all the way to the top. I, however, lost it near the top as I wasn't looking properly but if you take your time, and you have these sunny conditions, I can't see how it can be missed. I kept looking back to see the view and The Ben was clearly visible, good day to be up there I think. I was glad there was no snow to deal with today after yesterday's escapades on Bidean nam Bian. Got to the top of the coire, 1hr 30 mins after leaving the car, where there is a small cairn. The views all round were pretty stunning so I took a moment to take it all in. A half hour after leaving the top of the coire I was on top of Stob Dearg looking down at the "ant-cars" driving across Rannoch Moor then I took some shots at the summit looking over Beinne a' Chrulaiste towards the Blackwater Reservoir, and looking back to Bidean nam Bian. I went past the summit cairn to have a look over the edge towards where the brave people scramble up. Not for me I thinks. Had a quick bite to eat then set off for the next peak of the day. Took a picture on the way up to Stob na Doire. After almost an hour I had reached the top of Stob Na Doire and took a picture looking back where I'd been. Not until I'd got here I realised how steep that side down to Coire Cloiche Finne is. Then took a picture looking towards Stob Na Broige via Stob Coire Altruim. The path down from this summit is quite steep and rocky so I was glad I'd decided not to come back this way. I reached the top of the path which drops into Coire Altruim (my return route) after 25 minutes then continued up to Stob Coire Altruim which took another 15 minutes. Took an image back along my route. The views to The Ben were now pretty good so couldn't resist a picture. After another 20 minutes I'd reached the top of Ston Na Broige so could settle down to some lunch and a cuppa. Spent longer than I should here as it was quite warm now and so peaceful, no-one else around for such a popular mountain. Eventually tore myself away and headed back towards the path into Coire Altruim. I tried making a snowman in a patch of snow by the path but I gave up because I've never felt snow as cold as that. Certainly different from the snow I had in my garden this winter.

The top of the path into Coire Altruim is quite steep but can be followed quite easily. Passed some guys near the bottom who were repairing the path and doing a very good job. I always feel a bit guilty when I walk past someone doing this as I feel I should be helping out.

There is only one tricky point in this descent, where the path goes close to the river on your right, and you have to do an easy scramble down this rocky bit. The picture makes it look worse than it is, and the rocks weren't wet as they might appear in the picture. 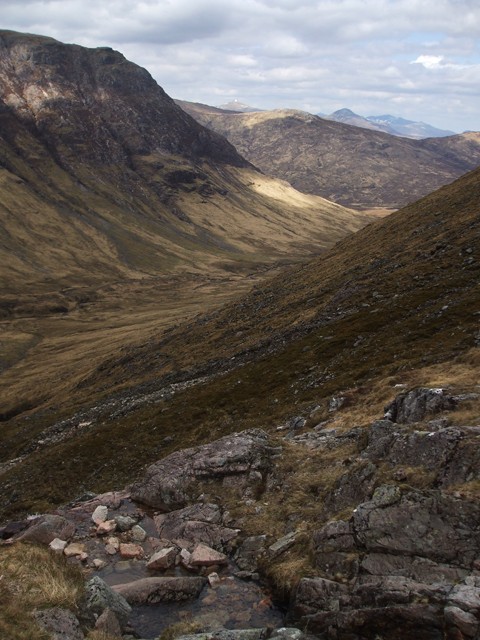 Once down in Lairig Gartain, which took almost an hour from the top of the path, it was a matter of relaxing and strolling back to the car in the sun, with a pit-stop to dip my feet in the river.

Unfortunately I saw the Emergency Helicopter hovering over what I think was Stob Mhic Mhartuin. They were there for about 20 minutes or so but I didn't see them winch anybody up so hopefully nothing bad had happened.

Nice report Skuk007,
Some excellent pictures too. Looks extremely rocky and ridge like in places. Nice