Munros included on this walk: The Devil's Point

So after quite a restless night`s sleep in the bothy, i`m (and probably everyone else is) woken up at 5.30am by my alarm on my phone which i had set for the previous day, and unfortunately is wrapped up in my rucksack at the other end of the room. After switching it off and lying around for an hour or so i decide to get up and prepare for more adventure. Breakfast is a cold baked potato, hard boiled eggs(which i had prepared the night before i left) which of course are shared with Dougie, the black lab, who ate all my oatcakes the night before and a nice juicy orange which i shared with my fellow companions, who are quite glad of the change to oatmeal and cereal bars. First on the agenda is wether or not we`re going to mount The Devil`s Penis

I point out to Jim that our train leaves Aviemore at 9pm that night and the rest of the Lairig Grhu is only going to take us 6 hours max to walk and as it was only 8 o`clock , we could get up and down the mountain and still have plenty of time and energy to get to the end. So we packed up our gear and bid a fond farewell to the rest of the guys and headed up the mountain. 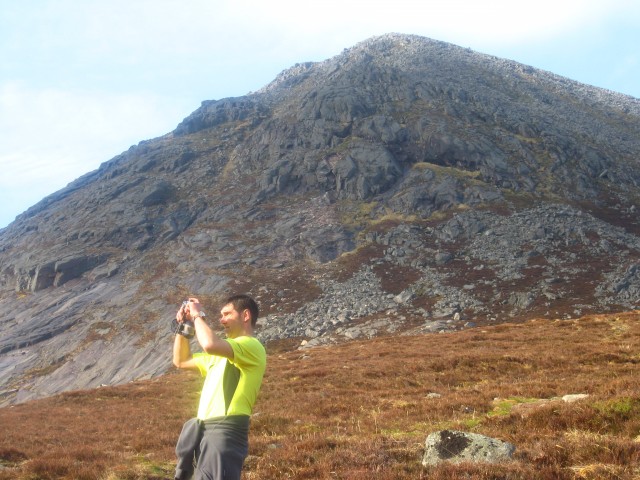 Jim at the bottom of The Devil`s Point

It was absolutely roasting as we walked up the path, but otherwise probably the easiest Munro i have done,once we got over the top of the waterfall and onto the plateau, it was just the huge boulder field to get over and we were nearly there. 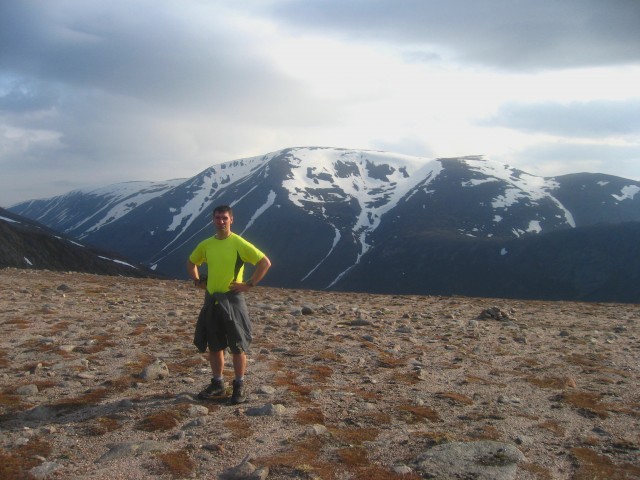 Jim on the plateau

After 45 mins we had made it to the top and it was an absolutely beautiful morning, it was 9am, the sun was shining and there wasn`t as much as a breeze in the air, after taking a few pictures and taking in the wonderful views around us i decided to go mad and celebrate my 7th Munro by stripping all my clothes off and posing on the peak with only my cap saving my blushes. 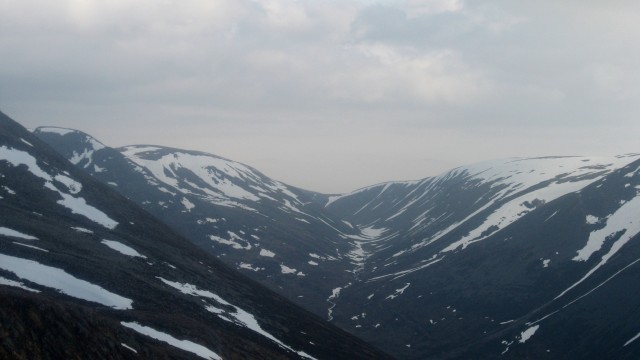 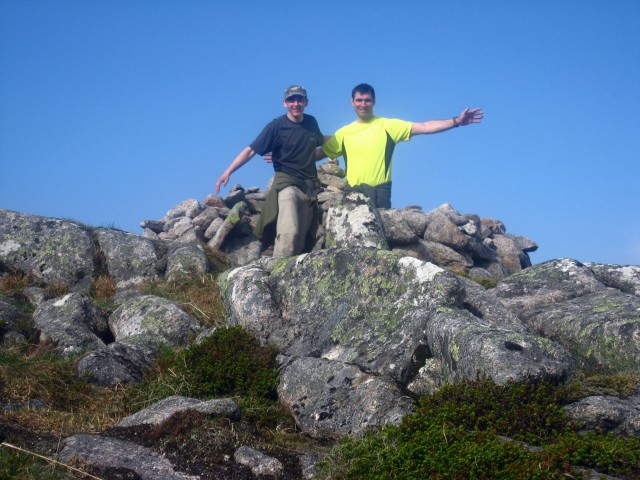 Jim and I at the top

It only took us about 25mns to get back down again and we were ready to head up into the snow towards the Pools of Dee. My feet were still a bit sore from the day before but in times like this you just have to grin and bear it, although it`s something i`ll need to sort out as i seem to get blisters quicker than anyone else. As we headed further north past Angel`s Peak and Ben Macdui, crossing countless streams and waterfalls, the snow patches were getting bigger and deeper, and most of the river was covered in white snow bridges. We noticed a couple of walkers on the other side of the River Dee, who were soon going to find out they were on the wrong side, as a couple of the guys from the bothy had also donethe night before. We stood and watched as the female, not following her male companion any further decided to cross the raging torrent as we waited with baited breath as she plunged in and made it to the other side wet but safe. 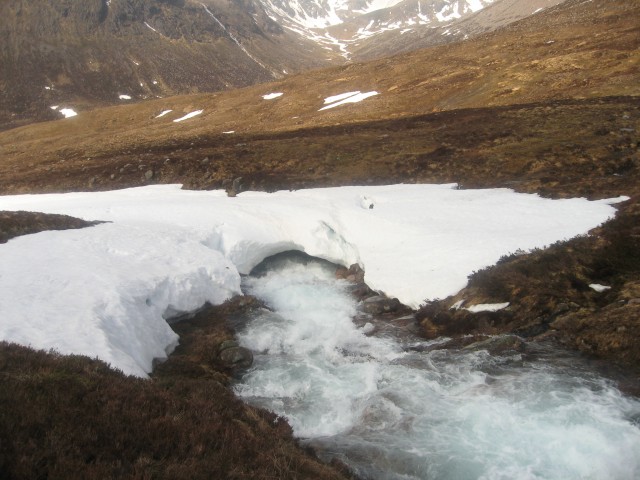 Snow bridge over the River Dee

We decide to stop for lunch about 11.30 when we reached the Pools, which surrounded and partially covered by snow looked awsome. 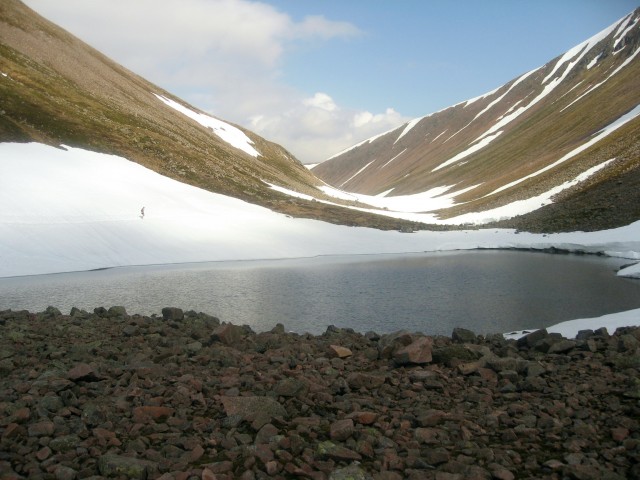 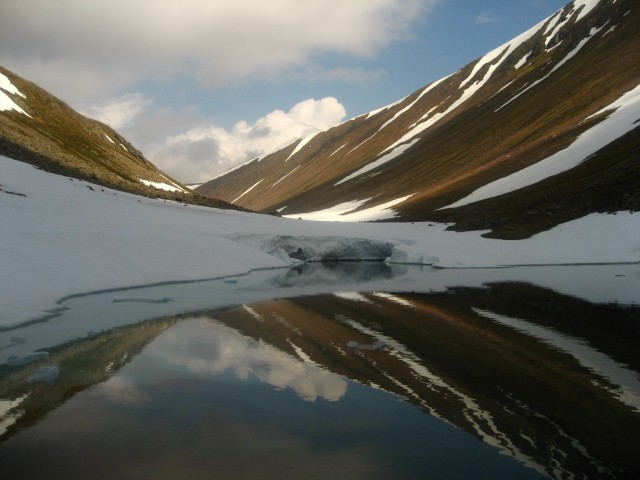 This is one of the most beautiful places i have been and as the sun bounced up off the snow,it was really warm as we slipslided along the packed ice, sometimes falling knee deep through it until we rested on some red rocks which lay in the valley and got ready for lunch , al fresco !

This is were it was time to get silly again.Turned on stove, placed pot on the gas, forgot about water for our boil in the bag meatballs and pasta, screamed when i picked up the pot with my bare fingers

Of course , Jim was in stitches

After traipsing to and from one of the pools for some ice cold water we ate and revelled in the glory of our surroundings and chatted with several walkers coming through in the oppostie direction. 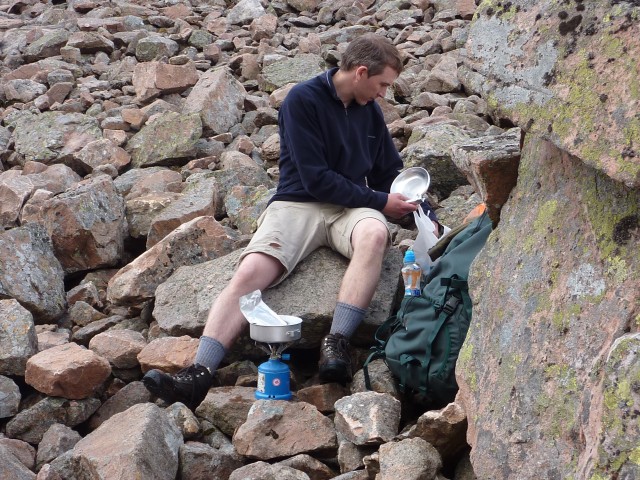 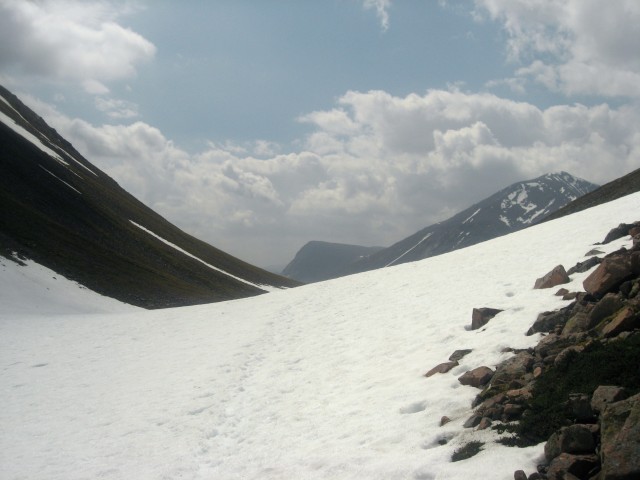 After lunch we headed off for the final leg of our journey, which was all downhill and my feet were really hurting now as we followed the snow covered Allt Driudh, stopping ocasionally to chat to some more walkers and were met with a feeling of slight sorrow as we came out of the mountains towards Rothiemurchus forrest, which is as stunning as it is immense. Now as nice a place as this was, you could have just plucked me out of there, there and then as for me the Lairig Ghru was over and i just wanted to immerse myself in a hot bath. 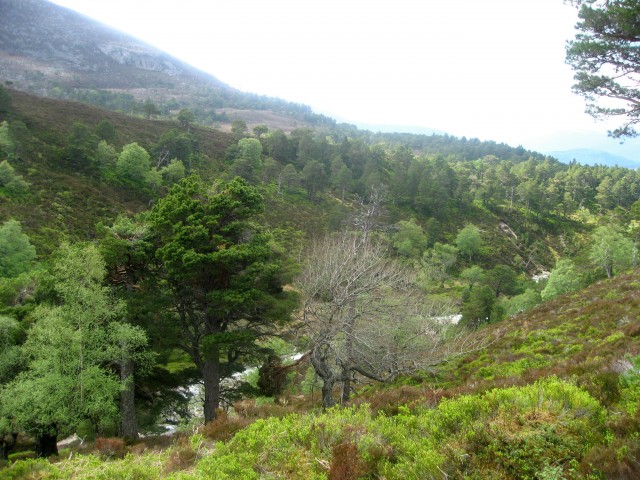 Once we reached ground level, I took my boots off to look at my blistered feet and felt dejcted

at the thought of another couple of miles walk to Aviemore. The path through seemed endless, but we amused ourselves recounting our past two days and watching thousands of ants march along to their nest with all sorts of cargo on their backs. We had many a laugh on our trip but the best was yet to come. Despite arriving with hours to spare we managed to miss our train home !

We celebrated with a pint and a burger, then lounged arround in a park for a couple of hours before heading over to the station. We arrived on platform 1 at ten past eight and we read on the screen that the Glasgow train was due here in 50 mins. As we chatted to a Swiss lady who had been (hitch)hiking around the mountains for the best part of a month a train came into platform 2. Ignoring it for ten mins, Jim then wondered why the trains seemed to be heading in the wrong direction, and again we ignored our instict and waited until our train came in, for Inverness ????? We jumped onto the train "Where`s this train headin for?" Jim shouted at the startled passengers, "Inverness" came back the answer we didn`t want. We raced off the train and asked the driver about the Glasgow train, who merely turned and pointed at the other train heading down the tracks!

The conversation with the guy from Scotrail on the wall mounted intercom was comedy gold itself, but eventually he admitted it was their mistake and arranged for us to travel home in style by taxi.

So all in all it was a great walk, meeting many great people and one I would recommend, but next time I`m out i`ll learn to use a map properly, always trust my gut instict and keep my eyes peeled for snakes. 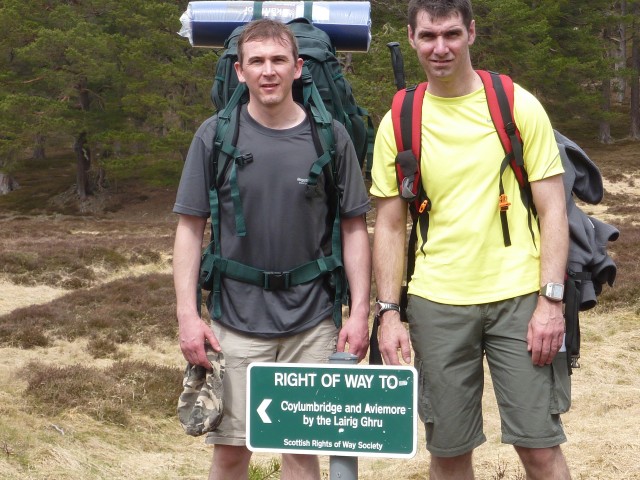 You've just brightened up my very boring night shift with your tales of snakes, snow and woe in the Cairngorms. You should video your next walk and post it here

Looked like you had a great time and the walk itself looks lovely. Was staying up there in February and had a wee wander in the Rothiemurcus forest. Beautiful place, especially at that time of year with plenty of snow around. The wee lochs were all frozen too. Was picture postcard stuff.

Superb two-partner tomboy, really enjoyed that one. Great pics of the Pools of Dee - they look amazing with the remaining snow.

Nice one Tomyboy73,
Great report which i can use when I get around to venturing up that way.

Burnt your fingers then leg

You must be a comedy double act. I am surprised they arranged and paid for a taxi though.

You should try Compeed plasters (unless you're diabetic) - they are excellent in preventing blisters from fully forming once you feel that inital soreness.

Hilarious report - you're worse at cooking than I am - and I'm hopeless!

Was good of the railway company to get you a taxi though - although I gather they told you the wrong platform? I've actually done a similar thing in that when I was coming home from work on the train once, the train sat in my station for 10 mins and I sat calmly reading my book - I'd completely miscounted the stations and thought we were at the previous one. I even looked out of the window at one point and didn't recognise my error. I ended up out in the wilds of the Yorks Dales and had to ring my Mum to come and get me! The conductor thought it was hilarious!

The Pools of Dee look beautiful - thanks for those pics - haven't done the Lairig Ghru yet and was wondering what they looked like.

I'd say Monty's spot on with his anti-blister advice - and the amount he's doing lately, he should know!

Where's the pic of the 'wearing nothing but a hat'?

yeah, we were pretty relieved, to say the least, that they admitted putting up the wrong info, and some lucky taxi driver was £256 to the good thanks to scotrail. and i was pretty amazed myself at the pools, i thought they were just going to be some oversized puddles !
i was too shy to show off my near naked pic, maybe next time, think i`ll make my partypiece

Well, I have to admit that, although I'm not shy about them personally, I've never had any of my 'walking in my bra' pics put out anywhere in case they offend anyone...