A stunning day on Ben Donich and The Brack (first report)

A stunning day on Ben Donich and The Brack (first report)


Been looking for an excuse to post my first report for a while now, and a glorious day in the Arrochar Alps provided it.

Have been warming up to start tackling the munros this year with a few nice wee hills (Beinn Dubh, Ben Venue and Ben Ledi among them). Last week I had my first ever kop-out on Beinn an Lochain (too much hard snow combined with lack of experience, equipment and any company on the mountain meant I turned back 50m from the top). I was determined, however, to get back out and make use of the good forecast in the same area, and liked the look of Ben Donich. When you fall off the horse and what not...

Little did I know how good a day it would turn out to be. Apologies for photo quality and if I get any names wrong - I am a novice walker with only an iPhone in my arsenal!

A planned early start was delayed after a mishap with my walking boots and a tumble dryer (I know...). I had had my eye on a nice new pair of Solomon midtops on sale to replace my now obsolete approach shoes anyway, being fed up of getting wet feet despite wearing gaiters. So picked these up in Glasgow and onwards to the layby just past the Rest and Be Thankful, arriving just after 11.30 (not before receiving a warning about pack ice from the guy in Costwolds of which I was already acutely aware!). It was warmer than expected, so hoody and jacket were packed up. Could see the summit from the car park, visbility was good. Beinn an Lochain on the other side was still looking menacing, for another day though...

Walked up the forestry track and took the path to the left through the felled woodland, gaining height quickly. Within 15 minutes I was breaking into a sweat, and although comfy the new added weight of the higher boots took a bit of getting used to. Passed a few people on the way up and spoke to a few early starters coming down. The feedback was it was glorious at the top, hardly any snow and barely any wind. It was at this point I started thinking about also climbing The Brack. Looking back to Loch Restil

The path gets rougher higher up, passing some rocky outcrops, and the views are fine down Glen Croe, with the cobbler and then Ben Lomond coming into view. The Cobbler coming into view Looking back, it being such a clear day, the Cruachan ridge was clearly visible. The ascent was busy and I passed quite a few more groups, all in high spirits, but all as surprised at the heat as me. I was starting to think I should've packed suncream! The ascent flattens briefly at about 600m, then climbs another rough section, before a brief downward scramble (nae bother), and then the climb to the summit plateau. Still very warm and now very hungry, I reach the summit plateau and the views of Loch Long and Loch Goil were peaking through, looking like a dream. I was making good time, only 1 hour from the car, which was surprising because walkhighlands had said 3 to 4 hours up and down. Either way, I broke into a light jog over the knolly area (no fear of twisted ankles with the new boots) to get to the cairn and my lunch. The views were stunning in every direction - Ben Cruachan and Lui to the northwest, Ime and the Cobbler to the north and Ben Lomond to the east. The best viewing, though, was to the southwest, down Loch Goil towards the firth of clyde. Not sure if I pictures do it justice, but I could see all the way to Millport, Little Cumbrae and Arran! Loch Goil, Long and the Firth of Clyde

I spoke to a Spanish couple while eating my lunch, and they commented this was not the Scotland they though they were going to be visiting! I could've stayed there for ages - there was barely any wind - however I had already decided I was going to exploit the weather by climbing the Brack. I was a little apprehensive as this would mean my first ever 'off piste' hill climb (without a discernible path), however I had seen walk reports combining the 2 and the route taken on the site previously, so thought I would go for it.

Headed back cross the summit plateau and turned right about halfway, following a diagonal route of pathless descent towards the bealach. Although boggy in places, you can make some good time down here as it is all soft ground, so can take big leaps and move quickly. I was lucky enough to come across a pair of ptarmigans just above the snow line on my way. I have seen one once before on Ben Lomond, but it bolted fairly sharpish. These guys however were fairly docile and didn't seem to mind me! Looking across to the steep sides of The Brack from here, you can see a faint valley that runs down from right to left, which appeared potentially the easiest way up. I aimed for the area at the bottom of this valley at the bealach. Beinn Ime and The Cobbler from the bealach

The bealach itself is boggy but presents no difficulty. Reckon I got down from Donich in 15-20 minutes, feeling pretty good. That, though, was a complete ruse for what was to come. Climbed over a metal fence at the bottom of the Brack and began to climb, keeping vaguely to the right of the wee valley. Not gonna lie, it was really tough. The lack of path, unrelenting ascent, bog factor and difficult ground, added to the heat and the burning in my legs and back meant I had to stop every minute or so to take on fluid. After a while, I ditched my valley route plan and just zigzagged up whichever way looked easiest! The views back down Glen Croe towards Beinn an Lochain were good. There is a brief leveling off before the final ascent to the summit, which I thought would never come. Coughing, spluttering and out of breath, I reached the cairn and was surprised to be on my own, even if I hadn't seen another sole since the top of Donich. The view in every direction was breathtaking, and again barely a hint of a breeze. 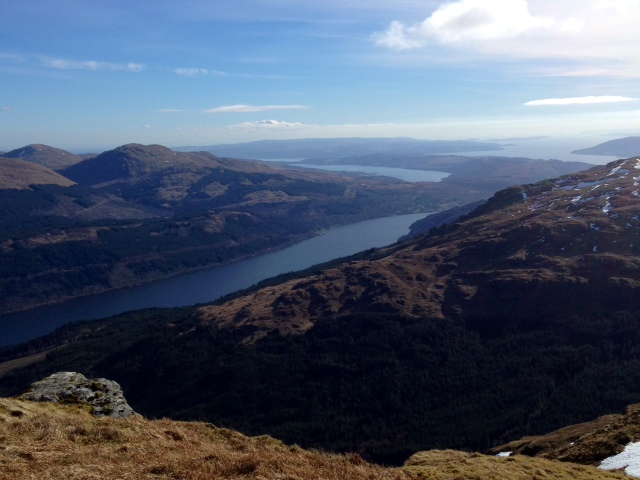 Loch Long and out to sea

After a quick snack and some more fluid, I started heading down, taking the quickest route I could to the edge of the bealach and the Glen Croe forest. The new boots came into their own here, supporting my now very tired calves and ankles. At the bealach, a guy called Chris approached me and asked if I had seen a woman dressed in black (!). He explained he had been coming down from Donich and managed to lose her! I took his number and said I would call if I saw her on my way down or at the car park, but I did not. Maybe she was still atop Donich?

I headed across the bealach and down a brief steep descent to find the forestry path (look for the white markers), which eventually takes you to the forestry road, past some nice wee waterfalls and back to the car park after about 3K. Made it back to the car just before 4pm, so had taken me just over 4 hours, which I was quite surprised and pleased with. All in all, a great day, and one that will live long in the memory. Bring on the munros! Would be delighted to hear from you if you want to leave any feedback or suggestions for similar walks.

Re: A stunning day on Ben Donich and The Brack (first report

What a great account of these two hills - you got a lovely day for it and took some fantastic photos. Thanks for reminding me that Scotland has so many treasures

Re: A stunning day on Ben Donich and The Brack (first report

Thanks Huff, weather has been cracking lately. Looks like you got a great day in Torridon through the week too. Hoping to make the trip up at the end of Summer actually - any recommendations/tips?