What a difference a hour makes

What a difference a hour makes

Carn aGheoidh.gpx Open full screen  NB: Walkhighlands is not responsible for the accuracy of gpx files in users posts
Got the chance to do some work close to Glenshee, and as I've been sitting in front of the screen getting fat, this was a good opportunity to burn off some calories and see the sites.

I wanted a dry walk and looking on google could see there was a dirt road most of the way up to Carn a'Geoidh, so parked the car next to the gate and set off. As you can see there's plenty of space leaving free access. The path climbs steadily with interesting views of Glas Maol, a pretty bulky lump of rock 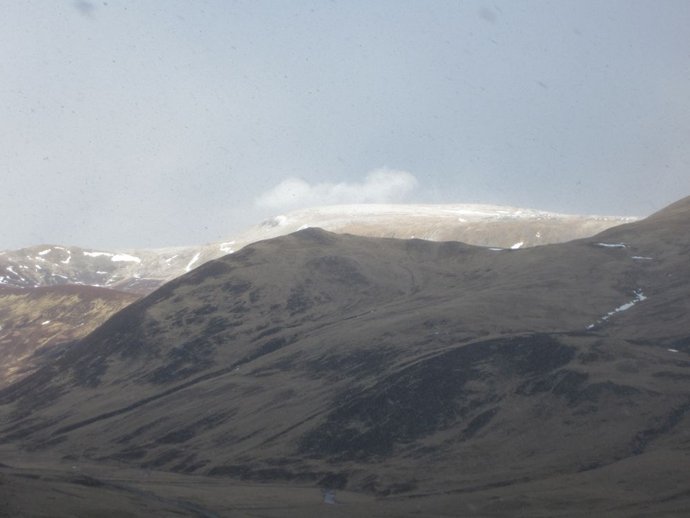 Anyway checkout the clear blue sky, not a cloud to be seen I was getting hot in the warm sunshine and the hat and gloves were off as I strolled along and through the pass below Ben Gulabin, very civilised.
Caught sight of a couple of white dots moving quickly up Ben Gulabin, and thought they weren't the right shape for deer and sheep don't move like that, then it dawned on me, mountain hares, apparently there is a scarcity of them. Certainly I've seen loads of them in and around Glenshee and as they all look pretty fat they must be thriving here.

Some nice views opening up at the end of the pass, with some interesting patches of snow for ski touring. Pity there hasn't really been enough snow for ski exploring this year, so far

Note the clouds in the sky. 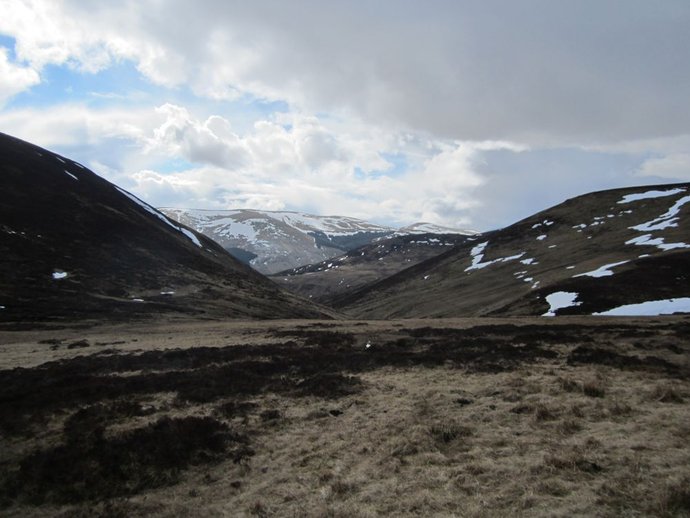 Still a nice day, there had been a very brief and very light snow shower earlier, just a few flakes really although there was a report of a hail storm further down the valley.
Onwards and upwards and a first view of Glas Tulaichean, the sky is getting ominously darker. On up the path and then it starts snowing big fluffy snow that's lying readily. 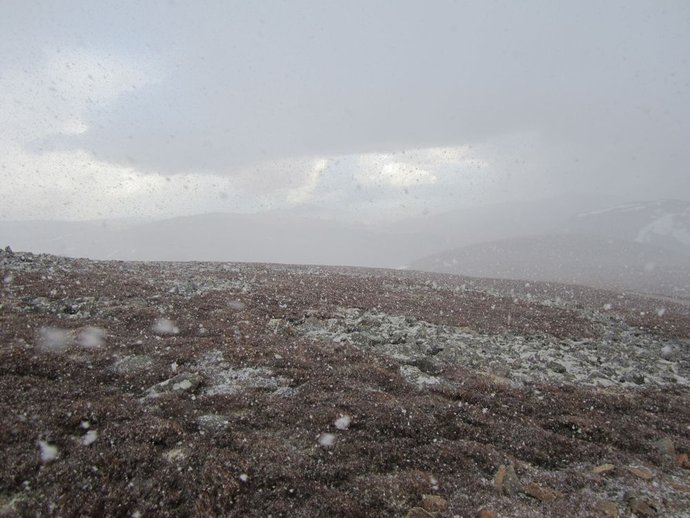 It's getting pretty persistent, so I get the forecast out of the phone after getting the phone out of my pocket, due to last until about 5pm and then it will be a clear and starry night. There's a hut as a marker, I've got the GPS, warm clothes and I'm getting the first sight of Carn a'Gheoidh not too far away. 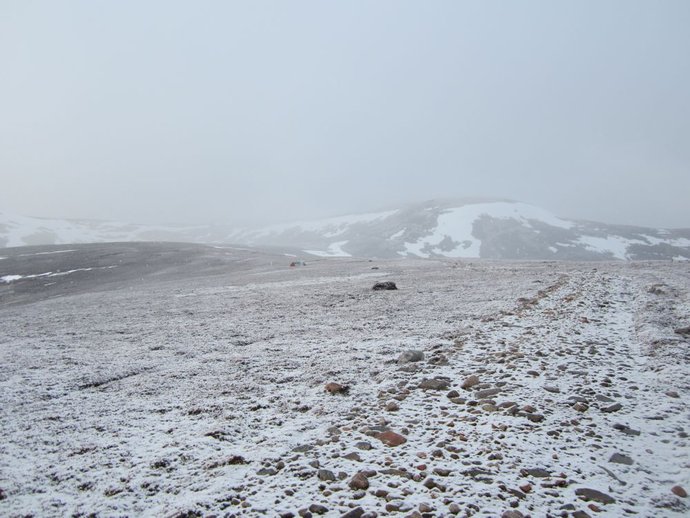 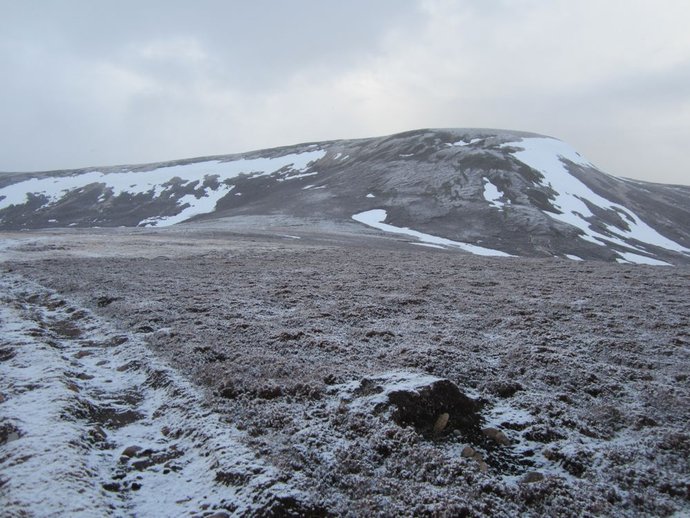 Carn Bhinnein also looks tempting in a completely non sexual way, wonder if I'll manage to include it on this walk. 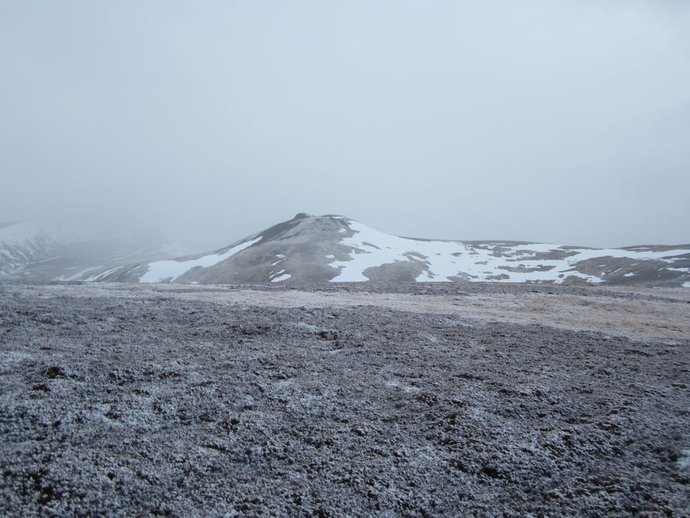 I traversed a bit to take the sting out of the climb up, but it's not a slog and I'm quickly on the summit. There are three cairns, with the one int the photo below with the shelters the summit. I walked on the few tens of metres to the next one and looked back; this is a bit murky and obscuring the views I'd come up here to take in, should I hang around and see if it clears so I can get my holiday snaps

Wandered around for a few minutes and saw some tantalising lighter patches in the sky above, but it doesn't look like I'm going to get a spectacular panoramic any time soon so started down.
I hadn't got far when the cloud lifted and some of the beauty shown through, Carn Bhinnein in the evening sun with Glas Tulaichean behind. 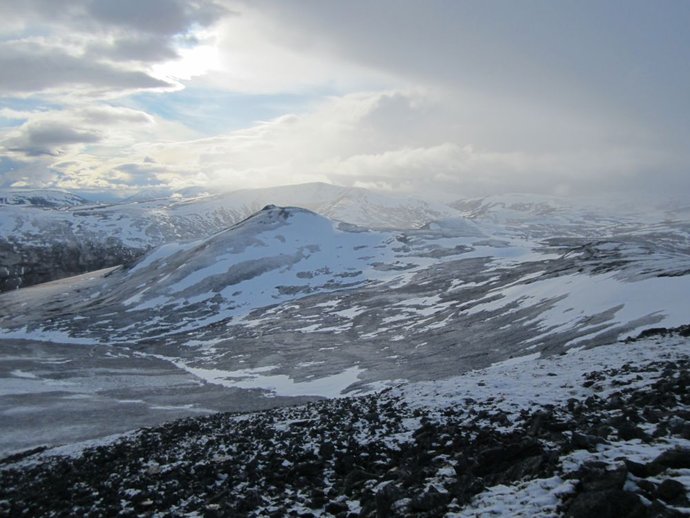 It must have snowed quite heavily again when I was up top, quite a difference from the clear blue sky's earlier. 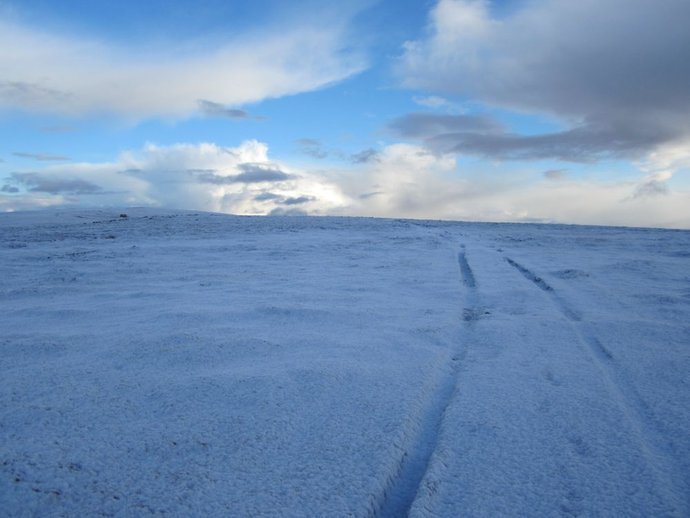 Got down into the pass and the mountain hares were out again pronking along with their amusing way of getting around. I must checkout getting a camera with a better zoom. Picture below proves their existence and take my word for it there were plenty of them around. 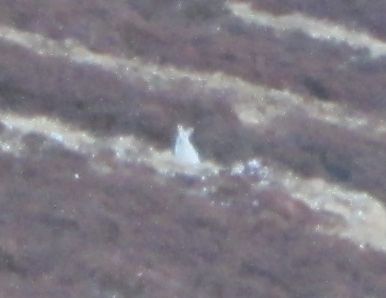 Not too far from the start or finish, depending, of the walk you cross a mountain stream with some interesting patterns in the rocks, 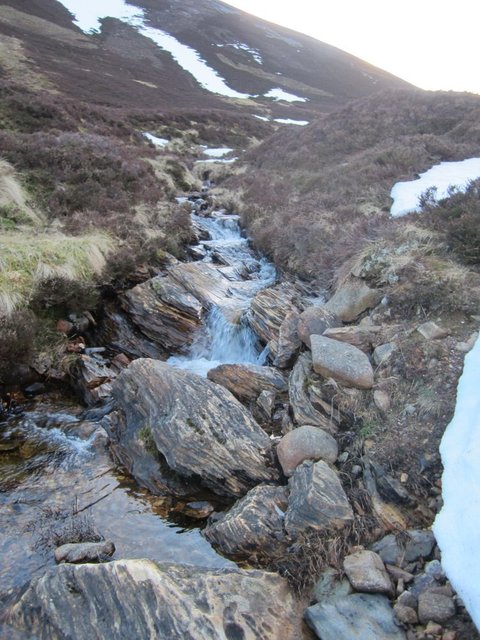 A very pleasant walk finished off with some scenic views up the valley. 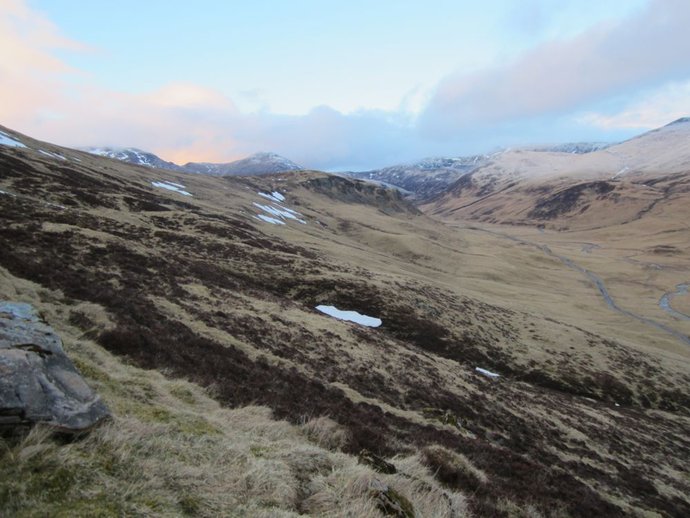 And the forecast was spot on jmarkb wrote:Nice one! The A frame is from an old ski tow, I think...

That's what I was told as well. This used to be a ski area before the developed the current location.

and really enjoyed the walk. I too was transfixed with the white dots moving up and down the hills!!