Route description: Derry Lodge, from the Linn of Dee


We parked at the NTS Linn of Dee carpark (where the toilets were inconveniently closed for maintenance) on a lovely sunny spring day, walked through the trees to the main track, and took the short detour across it to see the salmon ladder. Back on the main track we crossed the bridge and headed towards the wilderness, dreaming of enjoying our picnic lunch in the sun by the river near Derry Lodge. As we admired the mountains we were walking towards they started to disappear under what we thought was rain, and I buttoned up my waterproof ready for it. We were pleasantly surprised when it turned out to be snow, although we were walking into it and I decided wearing my sunglasses was a better option than blinking every 3 seconds. The snow passed fairly quickly and the sun came out again, restoring our view of the peaks ahead. Derry Lodge appeared very suddenly right ahead of us through some trees - amazing that such a big building stays so well hidden. And a shame that it's still boarded up, although from the outside it seems in ok condition, so maybe one day... By this time it was lovely and sunny again so our picnic dreams came true. We spread our picnic blanket on the sand and enjoyed our lunch near what are presumably the remains of a bridge (no longer) leading to the sign enticing walkers on to Coylumbridga and Aviemore via Lairig Ghru. So near yet so far away Although there were FBs marked on the map this was the only trace we saw of any, and the fords weren't tempting either, so that was the end of my plan to try to return to the carpark via the other side of Lui Water. It probably would have been another one of my infamous "short cuts", so perhaps it was just as well.

We decided to follow the water back to Bob Scott Memorial Hut, and since it was snowing quite heavily by then we popped into the bothy for a look. Plenty of signs of enjoyable nights having been spent there, and a photo of Bob himself. One view from the bothy With no sign of the snow easing up we decided to carry on, which was just as well as it continued with varying degrees of heaviness until we were nearly back at the car, even settling a little off the track. The return walk flew by surrounded by the fluffy snowflakes and we only made a couple of stops, firstly to eavesdrop on the animated chat going on between what we think were two grouse. A bit rude I guess, but they were quite loud. 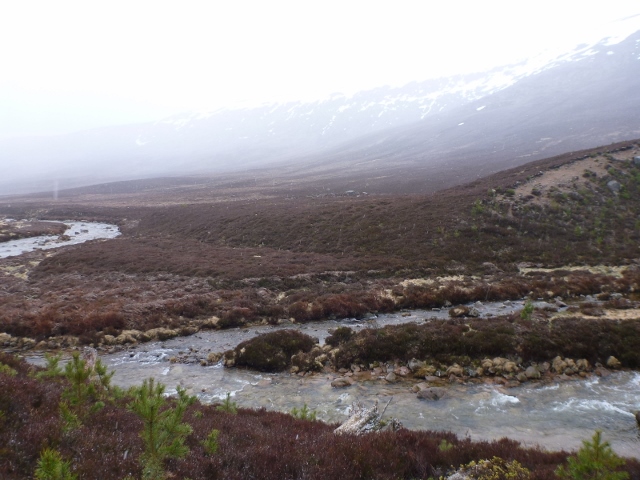 We also chatted to a couple near the carpark who were visting the area. The gentleman asked if Derry Lodge was still there and said he'd stayed in the bothy in the late '50s and had known Bob Scott, so it was nice to meet someone with history in the area.

We carried on to the Linn of Dee, which was worth seeing. No doubt this track is just a means to an end (or a start...) for hardier adventurers, but we had a lovely afternoon out and thought the walk was well worth doing in its own right.