Had been too busy of late to get anywhere near a hill but managed to find a space on Saturday. Was also very unfit which would show itself throughout the day.

Nice drive up to Glencoe in the early light.

Parked in the wee lay-by down Glen Etive just at the end of the first wooded area.

Walked down the road a short way to try to find a faint path. Then steeply up the hillside towards Beinn Maol Chaluim. Had to negotiate a craggy section before the ground levelled off a bit higher up.

Some snow patches here and there most of which could be avoided or were OK to walk through. Didn’t need spikes but took out the ice axe for a couple of harder packed sections which sloped off quite sharply.

Ridge walk for the final section to get to the summit cairn. 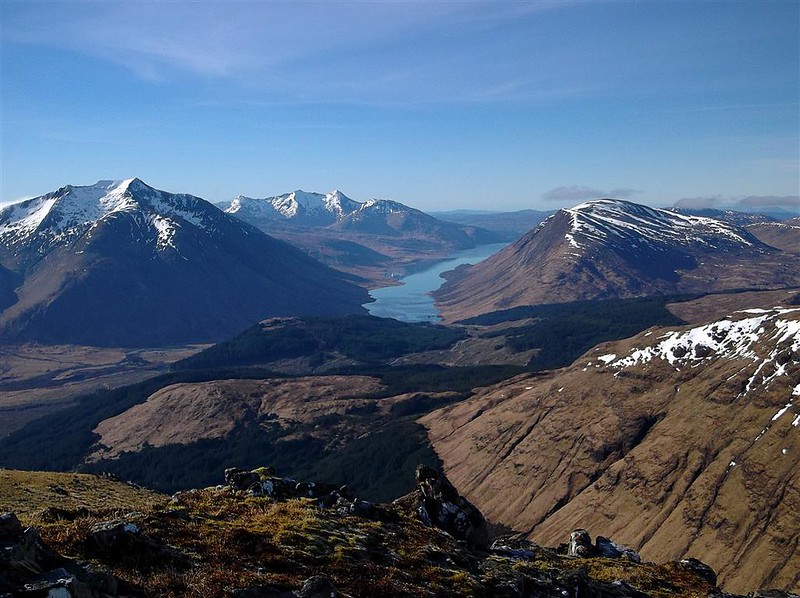 Some mist rolled in and partially obscured the views. Waited a bit to see if it would clear but gave up and started back down. As usual, it then cleared.

Used the microspikes for some sections on the descent and took a bit of a detour – didn’t fancy descending through the crags.

Had spotted a good section for glissading on the way up so took advantage on the way down – forgot though that my trousers weren’t waterproof.

Quite a bit of noise from frogs on approaching various small areas of water but they then rapidly disappeared when they saw me approaching.

Back down to the car trying not to slip too often.

Then drove up to Glencoe and the Altnafeadh car park. Very busy by this time but managed to get parked. Sat on the bench to have lunch and got talking to a couple up from Gloucester – they’d tried climbing Stob Dearg but couldn’t get up through the snow cornice so came back down – were going for a low level walk instead.

Had a longer break than planned – too nice to rush. Eventually got ready and set off along the road to find the start of the track for Beinn a'Chrulaiste.

Quite steeply up the hillside and was starting to find things harder than usual – very unfit so had to stop fairly frequently.

Again there were some snow patches but no need for any winter gear.

Got to the top where the wind was a little chilly – sat in the wee shelter to have some food.

More photos then started to head back down. Right knee had been playing up over the last couple of months and starting to get worse. Opted for the direct descent back the same way instead of carrying on for the loop.

Some big holes in the snow.

Snow at the head of the corrie

Back down at the car, the couple from Gloucester had had a good walk and found a good viewpoint. They were pondering what to do the following day so we had a bit of a discussion. Got changed and headed back home for dinner.

Nice photos there and a good effort

You had a great day there...Well done !

You unfit??! Is that even possible?

Great set of photos and a reminder of needing to return to Clen Coe soon.

Stunning scenery made all the better by your photos.
Thanks rockhopper I enjoyed your report.

Great photos of a good day out. We all know how quickly the weather changes! Etive looks glorious in your report. I'm in Connel at the moment and it's quite pleasant, but yesterday I was defeated by Beinn Sgulaird due to a gale with snow and clag.

Those photos are great, what a day.

I wish I got your views when we climbed Beinn a'Chrulaiste. Those pictures!

Excellent stuff. Good to see you back in business!

Great stuff. I aspire to be at your level of unfitness.

Nice one RH. I really enjoyed Beinn MaolChaluim when i climbed it as the views over to Glencoe and beyond were stunning

This is a definite for later this year (the ridge). Hope I get weather even a quarter as good as you did.

A stark reminder to keep blue-sky days for this area! Aside from one stunning day on Bidean/Sgreamhach, all other days I've had in glens Coe and Etive have been less than perfect.