Hitting 40 on Ben Chonzie as the IT band strikes again

Hitting 40 on Ben Chonzie as the IT band strikes again


First published on my blog a few weeks ago. Some of you may have already seen this. Thanks to Karen for great company on the day. I hope that it won't be long before I'm in form again. Fingers crossed.

Mountains and the mind

Friday gone should have been a moment for celebration. But as I turned from the summit of Ben Chonzie, my 40th munro, I knew instantly that something was not right. The familiar knee pain that had plagued my early forays into the mountains - and that I thought I had banished - had returned with a vengeance. Approached from the south, Chonzie is not a steep hill - more of a broad, flat topped lump. Yet even the gentle slopes of this popular Perthshire munro proved enough to set off my knee.

Early on in my hill walking days, I learned that tightness in my calves and hamstrings, and weakness in my quads, hips and glutes were causing inflammation of the ilio-tibial band (a long band of connective tissue running down the outside of the leg). This would often lead to excruciating knee pain - but only ever on descents, and only in my right leg. A course of physio and a regime of stretching and strengthening exercises seemed to resolve the problem. I was already using poles religiously and had started to wear a knee support. By February 2014 I was climbing big hills with nary a care in the world. Over the course of the year I built up to longer, harder days, covering greater distances and much more elevation gain. I’ll never forget the elation that I felt in May 2014 on completing a 21km route over three munros near Crianlarich. Part of the wave of positive emotion I experienced that day was relief. During a long, testing descent in driving rain and darkness my legs felt absolutely great. My hand ached a little as I had cut it quite badly slipping on wet grass and smashing it into a rock near the summit of Beinn Chabhair. But who cares about a bit of blood? The cut was bandaged. What mattered was that I had beaten the knee pain. The following month I climbed all the munros on Skye’s Cuillin ridge and over the rest of the year just went from strength to strength - even managing to whizz up and down an active volcano while on holiday in Japan.

The very first sign that not all was right with my legs was on my final walk of 2014, a big day over 3 of Snowdon’s western outliers and culminating at the icy summit of Wales’ highest point. I had almost reached the car when, on the very last stretch of the Llanberis path, I noticed that familiar twinge. This time however, it was my left leg. During subsequent walks in January and February that small murmur of complaint seemed to grow louder and louder. Still, it was nothing like the levels of pain that I had experienced when first battling IT band problems in my right leg. In February I had a couple of fantastic winter days in Breadalbane including a 22km route that involved substantial descent and re-ascent between munros, with a total of 2500m elevation gain over the weekend. It was in mid February, on a far easier route in Snowdonia (recounted at Walkhighlands) that I knew I was battling something more serious. The pain was now significant enough to interfere with my descent. Later that evening a gentle downhill stroll to a restaurant in Betws became an awkward hobble. The IT band knee pain that had first attacked my right leg was back - but this time in my left leg.

I had a month to sort things out before my next trip up to Scotland. Flights, car and B&B were all booked. Having cancelled two trips earlier in the season due to winter storms I wasn’t keen on scratching my plans for mid March. So I restarted the stretching and strengthening routine that I had foolishly let slip. But my month of hasty preparation wasn’t enough. The pain I felt coming down Chonzie was all the confirmation I needed. My plans for the remainder of the weekend had been to do the Tarmachan ridge on Saturday and then 2 more Perthshire munros on Sunday (Ben Vorlich and Stuc a Chroin). But this was now all up in the air. I wasn’t sure that I would be able to do anything else for some time. I decided to drive from Comrie up to the Ben Lawers car park to recce the start point for Saturday’s planned walk and to gather my thoughts. The road climbs to over 500m but was now largely clear of snow. Some distance beyond the car park I stopped the car, startled by the sight of a large crow picking away at the carcass of a young deer resting by the road. The poor creature did not appear to be long dead but already the crows had had their fill, leaving black, empty eye sockets and bloodied bone protruding through flesh and fur. 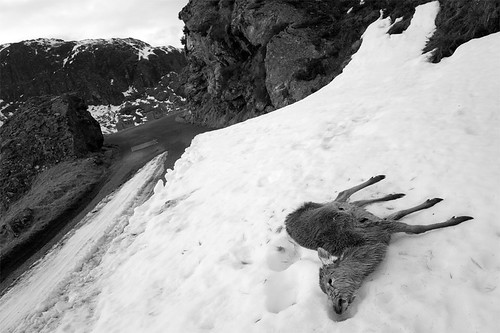 The morbid scene reflected my mood. I felt absolutely crushed. Even walking a short distance from the car caused searing pain in my knee. I knew that I would not be bagging any munros for a while. Standing on the summit of the Inaccessible Pinnacle had been the mental apogee of my first year of serious hill walking. Now this moment on the Bridge of Balgie road was the absolute low point - I felt like I was staring into the abyss. The sensation of being right back at square one was an enormous psychological blow. Later in the evening, sitting in the Real Food Cafe in Tyndrum my demons really surfaced. I have battled with both depression and anxiety in the past. Hill walking is actually great medicine for the mind. But now, just hours after completing my 40th munro, a wave of emotion swept over me: anger, frustration and almost despair. Only negative thoughts entered my head.

By Saturday morning my mood had lifted a little. Slowly, I was beginning to think more rationally. Yes, it was a setback. But I had overcome a similar problem before so I could do so again. I drove out to Oban then up to Ballachuilish. En route I telephoned BA to switch my flight to Sunday. No point in hanging around - the sight of snow capped mountains in warm spring sunlight would only frustrate me, stuck at sea level. Driving back through Glencoe to Crianlarich the conditions were superlative. I scanned the Bidean massif that I had summited the previous November and my eyes drifted across to the crest of Aonach Eagach. Not a cloud in the sky. I thought jealously of all the avid hill walkers and mountaineers enjoying this wonderful playground. Further down the road I glanced up and saw the ski centre car park completely packed. I felt like the kid with his leg in plaster, stuck at the touchline watching his mates play football.

I suppose like any sport, there is an enormous psychological element to mountain climbing. And climbing mountains from a base several hundred miles south of the trail head involves time, expense and careful planning. I never thought that climbing the munros would be easy. I confess I did think that I would be able to climb them more quickly than is likely to be the case. I’d hoped to hit 75 by the end of 2015. I realise now that I have all the time in the world and that setting intermediate targets is pointless. Done quickly or slowly, this endeavour is still going to take years. IT band syndrome is an over use injury and my experience in March is a warning, to take my foot off the gas and to rethink my strategy (such as it was) of simply going hell for leather. I lost the battle on Chonzie but I can still win the war. One step forward, two steps back. It’s going to take time (of which I have plenty), patience (something I’m invariably short of) and and a proper routine of exercise and physical therapy but it can work.

One of the less wholesome aspects of mountaineering, and peak bagging in particular, is its obsessive nature. On the one hand, it takes a certain amount of focus and dedication to climb mountains. But when anything becomes an obsession, that’s not a good sign. Obsessive drive in mountaineers can lead them into dangerous, even life threatening, situations. Witness the “summit fever” dimension of many of the more recent and well documented disasters on Himalayan giants such as Everest and K2. More prosaically, mountain madness can lead us to neglect other aspects of our daily lives. Aristotle was right to argue that happiness truly does lie in the “golden mean”. Too much of something is as bad as too little. The right amount of courage is a virtue. But its surfeit - recklessness - is certainly not. Time will tell if my new strategy will pay any dividend. I will cancel my planned trip to the Highlands in April. Instead, I will fill the next 8 to 10 weeks with proper physical and mental rehab, perhaps taking in some smaller hills before a week in Kintail in June. Having hoped to pack maybe fifteen or twenty munros into that single week I will scale back my ambition accordingly. I don’t care how many more or few munros I climb this year, so long as I climb them pain free.

chonzie.GPX Open full screen  NB: Walkhighlands is not responsible for the accuracy of gpx files in users posts