Only a hill: earth set a little higher
above the face of earth: a larger view
of little fields and roads: a little higher
to clouds and silence: what is that to you?
Only a hill; but all of life to me,
up there between the sunset and the sea.

from 'A Hill' by Geoffrey Winthrop Young

Due to bad weather and illness I haven't been able to get out since my last outing on the 22nd March so my proposed two walks a week have had to go on the back burner. I'm not good at being ill so I'm bored, fed up, and have got a bad dose of cabin fever. Consequently to while away my time I have decided to post another of my past walks.

Bow Fell.gpx Open full screen  NB: Walkhighlands is not responsible for the accuracy of gpx files in users posts
Myself, Joe, and Nelson (my dog) set off from Seathwaite in Borrowdale for Stockley Bridge and then took the path which would take us up Grains Gill, and then, much higher up alongside Ruddy Gill from where it picks up the main path at the base of Great End. Upon reaching Great End we then continued roughly northeast for around 220 metres then south on to the path to Esk Hause and the shelter cairn. From there to the summit and still walking roughly south the Esk Pike path is good but rough apart from the wet section in the bottom just before starting the climb proper. It's fairly rugged near the top but all in all a nice, steady, decent climb to the summit. After taking photos of Glaramara and Allen Crag we continued down the far side of Esk Pike and the mile long walk to Bow Fell passing through Ore Gap which is another of the main 'crossroads' of the fells.

On reaching the summit of Bow Fell photos were again taken of the surrounding fells. Another walker who was on the summit offered to take mine and Joe’s picture at the cairn, of which we readily agreed. After having lunch on Bow Fell I was feeling cold due to the breeze and below freezing temperature so it was on with the gloves. Harrison Stickle and the Langdale Pikes. We then set off for the Three Tarns - still in a southerly direction - which is at the top of the Band Route leading into Langdale, with the intention of then accessing Bow Fell by the alternative route of the Climbers Traverse. After we had dropped approximately 250 metres (800ft) I mentioned to Joe that there were people on a path which was a lot higher than we were and looked suspiciously like the one that we should be on. Upon this observation we then set off back up the fell - oh, dear says I, or words to that effect - until we ourselves was on the high level path. Joe on the Climbers Traverse. 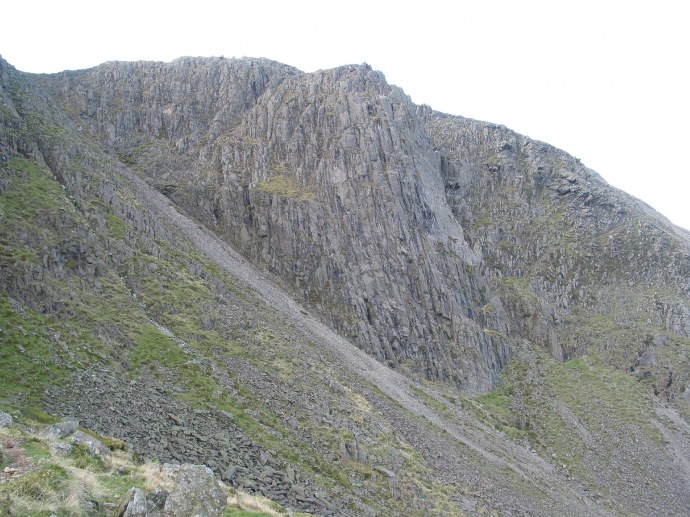 Joe had climbed the Buttress when he was in his twenties and spent a few minutes reminiscing and looking at it in awe. Joe with Bow Fell Buttress in the background.

Following this path we eventually came to the Traverse which was rough and had slippery scree in places but was negotiated without any problems. On our left was the massive of Great Slab which we crossed by way of one of the many grass filled cracks that run across it to bring us to the top of the Slab, Bow Fell Knotts, and The Buttress. We are now back on the summit of Bow Fell and the next step was to set off for Allen Crag and Glaramara. The Great Slab on Bow Fell. The Scafells from Bow Fell side.

So we headed off north in the opposite direction that had brought us here at lunch time and upon reaching Ore Gap we descended north down to Angle Tarn and picked up the trail heading southwest for Allen Crag. This meant yet another climb out to reach Esk Hause and the route to Allen Crag and Glaramara.

We reached the summit of Allen Crag after a short sharp pull up the south ridge and then set off on the path to Glaramara. This is a big hill and it is roughly 3 kilometres distance between the top of Allen Crag and the summit of Glaramara with a height gain of around 164 metres between the two. It's a deceitful fell as it taunts one into thinking that 'this is the last top' but no, get over this one and another one rears its rocky top. I bet this one's had some laughs in its time. Should be called Glaramara for the Gullible. The way over to Glaramara seemed endless what with all the ups and downs of all the intermediate fells the climbing seemed relentless. Walking on Glaramara with Great Gable behind.

We eventually reached the summit where I took a couple of photos and then it was time to head off home. There was a couple having sandwiches in the shelter cairn, which bemused me, as I would have thought that a person would be wanting to be getting back down at this time of year with the daylight failing fast. After leaving the summit we had to negotiate a rock drop of some 30ft which was covered in ice and therefore difficult to clamber down especially with the dog, which did remarkably well in truth. Speed was of the essence now as we were losing daylight fast so it was best foot forward. Joe didn't fancy going off by the Hind Gill route as it's almost dark, so instead we set off down the 4 kilometre ridge path which was covered in ice. Although there was a clear and starry night with a full moon it was made rather more difficult as we only had one torch with us as we passed Combe Head and over Thornythwaite Fell to arrive at Strands Bridge on the main road. We reached the car park after a further 2.5 kilometre walk down the main road back into Seathwaite and the car at 18:00hrs having taken just 1hr and 10minutes to descend. Once we had got past the ice line it wasn’t too bad underfoot. The moon was shining which made the going a lot easier with the assistance of our head lamp.

If I had had a Josephine with me instead of a Joe it could have seemed rather more romantic walking amongst the glistening ice, the crisp clear air, and the moonlight settling its silvery aura over the landscape.

This was a good walk on which we covered approx 13 miles in 9hrs with total ascent of 5400ft. The weather was sunny but cold with the temperature not getting above freezing point the whole day. The breeze made it seem even colder which I suppose it did with the chill factor and all that.

My old pal Nelson was quite stiff after his long walk but he did well for an 11yr old Labrador and did not hold us up at all. It took him 2 days to recover from this one.

Another beauty Trailmasher with some lovely shots of a long round, I feel for your poor dog (isn't 11 dog years close to 77 in human years) ...recovered in two days, I've got 27 years on him and I'd still be a week recovering

ChrisW wrote:Another beauty Trailmasher with some lovely shots of a long round, I feel for your poor dog (isn't 11 dog years close to 77 in human years) ...recovered in two days, I've got 27 years on him and I'd still be a week recovering

Thanks Chris and he did well on the fells. Unfortunately he has now gone to doggie heaven and I haven't had the inclination to get another one yet. BTW, I read your reply on MiniRambo's report on Wansfell so wondered if you hail from the Ambleside area!

trailmasher wrote: BTW, I read your reply on MiniRambo's report on Wansfell so wondered if you hail from the Ambleside area!

No mate, I actually started out in Leeds and have been fortunate to move all over the place since hitting working age, Canada is the current location of choice, we think another 5 years and we'll both be retiring and coming home

trailmasher wrote: BTW, I read your reply on MiniRambo's report on Wansfell so wondered if you hail from the Ambleside area!

No mate, I actually started out in Leeds and have been fortunate to move all over the place since hitting working age, Canada is the current location of choice, we think another 5 years and we'll both be retiring and coming home

Like you I was a bit of a gypsy myself and was fortunate to find my new home in the LD - or very near it - 20 miles from Blencathra and loving it.