Had planned to get away for two days at Easter - Friday’s forecast wasn’t good so held off for Saturday and Sunday. Late change as well from camping in the north west to somewhere more easterly due again to a better forecast for the latter.

This was day 1 - didn’t turn out as nice as expected until late in the day. Tomorrow would prove to be somewhat better.

Parked in the layby just past the start of the track to the mine. Light rain started just after setting off up through the forest.

Quite steep up through the forest before getting out into more open ground.

Got to a bend in the track - stopped to put on a waterproof more to keep in the heat as the wind was getting up than for the rain which was light on and off.

Heading back down could just make out Farragon Hill in the distance. Weather closing in a bit.

Some deeply banked snow to the side of the track in places - didn’t hang around long at these points.

Track descends towards the mine workings.

Then on to the end of the track. Down over the outlet from Lochan Lairig Laoigh and eastwards up towards Farragon Hill.

Weather closed in - no view at the top.

Wet slippery snow on the descent - tried the microspikes to see if they would help - did give some grip but they clog up frequently as you’d expect. Wee waterfall on the way back.

Got back the car then drove up through Tummel Bridge to join the B847 and drove down a short way to the layby east of Beinn a’Chuallaich. Had a break and some lunch.

Through the big gate after wrestling a bit with the chain. Past a wee bothy to get to the start of the hill track.

Saw two walkers with their dog coming down the track but branched off steeply up the hillside before they arrived. Clear enough at this point to be able to see down to the reservoir.

Not long after that, the clag was down. Some steep snowy sections - mostly soft snow but got the ice axe out just in case.

In clag the rest of the way to the top. Substantial cairn beside the trig point.

Had some more food - didn’t clear up so headed back down. As usual, weather started to clear on the descent.

By now the sun was coming out and it was starting to clear up. 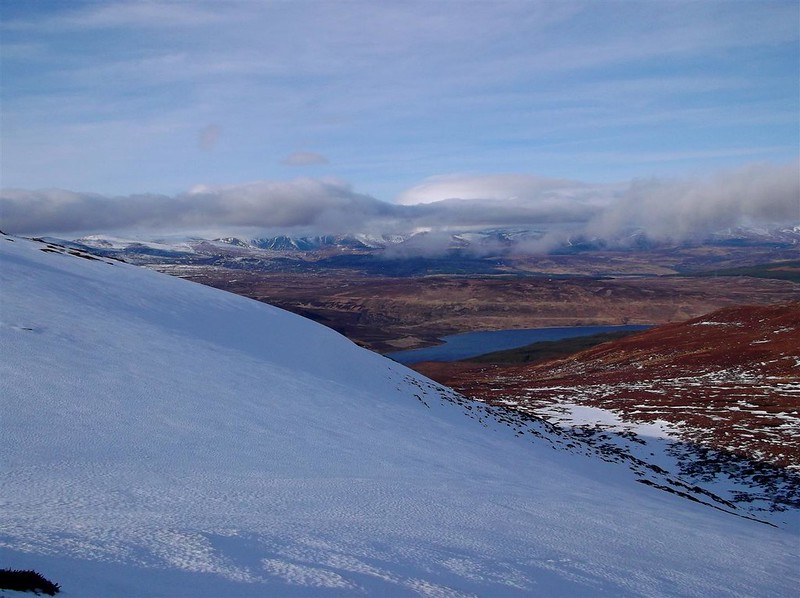 Final descent with the car in the layby -had taken a bit longer than expected.

Some of them first few photos reminded me of Siberia...not that I've been like, just the starkness! Looked like conditions improved in the afternoon though, still it is 2 more hills walked. I'm now looking forward to seeing day 2 as surely you must have got some glorious sunshine

Great read Rockhopper. Are you sure this was the same day....that descent on Saturday afternoon looks so different to the ascent in the morning

A real mixture of weather and conditions in this report RH

Loved the big snow wall pic, I wonder what size it is now after the hot and sunny weekend??

PS Is it just me who finds it weird to be out on the hills and then suddenly find yourself in the middle of a building site??

We were in the area as well, did Meall Corranaich and Meall a'Choire Leith on Saturday and Lyon circuit on Sunday. You were lucky on Corbetts, they were just below the cloud so at least you got some views... We got zilch on the Mealls, but it was a good test in navigation skills.

Just like you, we hoped that Saturday would be better than the forecast, but sadly it wasn't. Still, we enjoyed it. Sunday was much better and we almost got cooked alive

Two for the bike, rh? What do you reckon the bike would do for the timings on MT & Farragon?

Corbett count fair motoring up now RH! The morning on MT and FH reminds me of the conditions when Kev and I did them a wee while back.

That was sum lump of snow near the quarry.

A good couple of hills these but the climb up through the woods at the start was a bit on the steep side.

Still to do your 3rd hill of the day - it looks good.

BoyVertiginous wrote:Two for the bike, rh? What do you reckon the bike would do for the timings on MT & Farragon?

Had thought about taking the bike as I've cycled some of the tracks further down round Loch Farleyer before but decided against it due to the snow and the track being very slippery in places. Not sure how much it would save as you go off the track for the latter part to Farragon Hill but maybe 10 - 12km. Likely to need some pushing as there are some very steep sections esp at the start and coming back up from the mine - cheers