Met Jac the Lass in Edinburgh at 6:40 and we headed off to Blair Atholl to tick of a few more Munros.
Weather was looking OK as we left, bit cloudy but dry. Can’t ask for much more in Scotland! Nipped into SPAR for some water and then to the public toilet down the road – never been in a toilet with a maximum stay before!! 20p for 15 minutes, and the clock starts ticking. We did wonder what would happen if we overstayed…

On the advice of another WH member we decided to do the route in reverse to get the boggy bit out of the way first. We hit the road at 8:45, and promptly went half a mile down the wrong road! Take the first gate you see on the right folks – about 2 minutes from the car.
We about turned at the farm and did see a couple of others who’d overshot the gate so didn’t feel so bad.
Carn Liath looms above as you head off up the path. Couldn’t quite see the top at this stage.
[ Carn Liath looming as we get started

The path round the back of Carn Liath & Beinn Bhearg up to Allt Bealach an Fhiodha was pretty easy to find and follow and provided nice views as we made our slow, steady ascent. Up the valley towards our first summit

Then it’s just a case of following the stream up and then a final push up to summit number 1 of the day at Carn nan Gabhar. I didn’t encounter too many bogs – mainly because I was behind Jac who identified the worst bits!


There was a bit of snow about but all quite soft. Had to pop the brand new crampons on for 5 minutes or so, not much of a first outing for them! By the time we reached the summit, the wind had really gotten up and visibility gone down! The kind of wind that makes your eyes and nose stream. Needless to say we didn’t hang around. About all we saw for most of the day

It was getting a bit chilly, and it was about now I reaslied that I’d lost my fleece somewhere en route  As we were doing it in reverse through I thought we might get lucky and the 4 or 5 others we saw on our travels might have spotted it on their way back.

So back down to the bealach, following in the footsteps of those we’d passed and checking the GPS as we couldn’t see much at all! Had a quick hello to a few people we saw (even said hello to the dog in the hope he was sniff out my fleece!), but the conditions were a bit blowy so we pushed on to unpronounceable summit 2 - Braigh Coire Chruinn-bhalgain. There was a bit of soft deepish snow which maybe made it feel like a longer trudge up than it really is. Still very little visibility and a bit blowy so we quickly headed for Carn Liath, again following in the footsteps with the odd check of the GPS to make sure we were on track.


Wasn’t a difficult walk to Carn Liath and the wind was significantly lower so it wasn’t too bad.
Again, didn’t stop long. Quick sandwich and off we went. As we descended the cloud was lifting and with every zig and zag down we could see more and more. Had a couple of photo stops along the way, including a selfie that taught me that mascara and blustery munro summits don’t go! Had walked around like a panda from Carn nan Gabhar on. almost back at the car

Glad you had a good day (despite the clag): hope you get your fleece back!

Cheers for the company!

You defo got better photos than I managed, lol 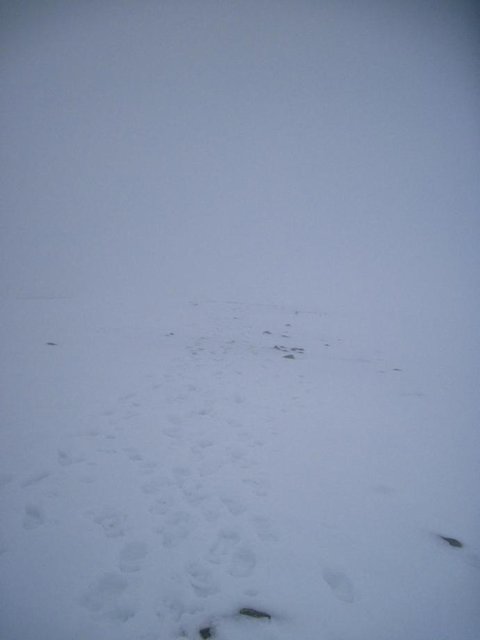 Cheers for the advise jmb! Was defo better getting the bog out the way with and easier to route find that way round with poor visablitity!

jac the lassie wrote:Cheers for the advise jmb!

No problem - you're very welcome!

Your pic sums up the majority of the day Jac!!
See - I told you it was my mission this week to get a walk report done. And I took your advice and sorted the pics out first. About to submit report 2 - no stopping me now!

Nice walk route. I was there in December between Christmas and New Year

Good to see it in different condition without so much snow

Congratulations to your 1st report Wow - what a day you had for it!! Beautiful