Met up with fellow forum member Stomper for these 4 munros. A longish day with good weather and clear views - especially north and west.

Leaving the car, we initially followed the estate sign "Beinn Liath Mhor Fanniach, suggested route" but changed our mind to follow the path by the Abhain an Torrain Duibh. This was a nice approach with good views of the 3rd and 4th Munros and not too boggy, despite a wet Saturday. We branched away from this watercourse to follow the Allt an Loch Sgeirich which we crossed with slightly damp feet to reach the dry ridge of Creag Dhubh Fannaich. The going was easy here and we stopped for a bit of lunch overlooking the impressive northern corries of Meall Gorm and An Coileachan before the last push up to Beinn Liath Mhor Fannaich. 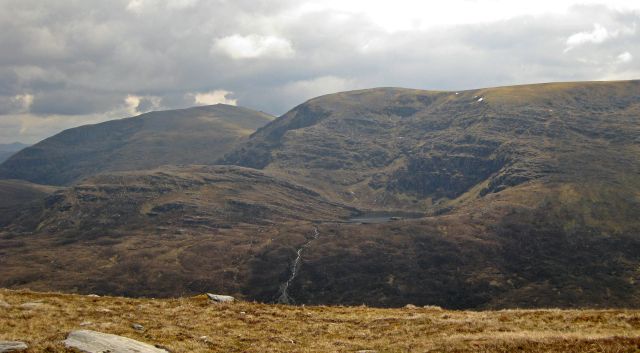 Sgurr Mor was already drawing our attention - what an impressive looking peak.

The views were improving all the time, N to Beinn Dearg and Suilven and W to An Teallach. 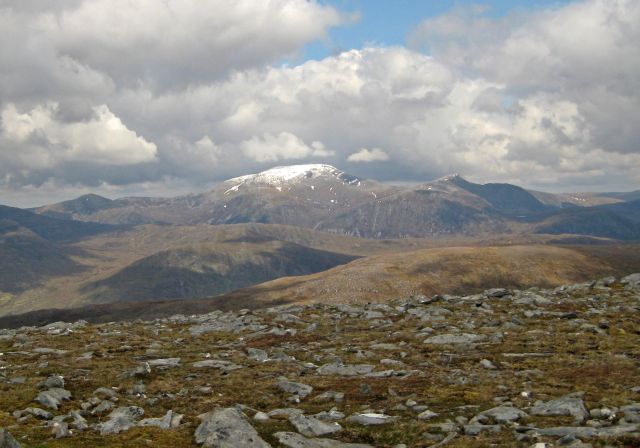 We headed carefully down the bouldery slope to the col beneath Sgurr Mor and climbed steadily up to the 1110m summit of Sgurr Mor. There was still a long way to go but most of the ascent had been done. Just the last small patches of snow remained on this lofty peak. The western Fannichs were the next hills to show their qualities. 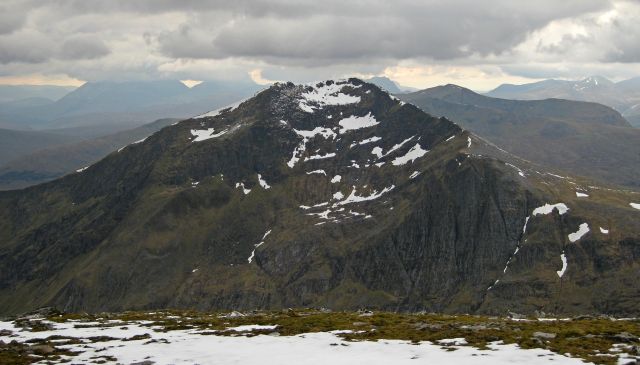 The next 2 Munros don't need much description. The ridge is about 6km over easy ground with just 310m ascent involved - we almost didn't realize we had reached the summit of Meall Gorm as it is little more than a lump on the route from this aspect (not from BLMF, I should add). 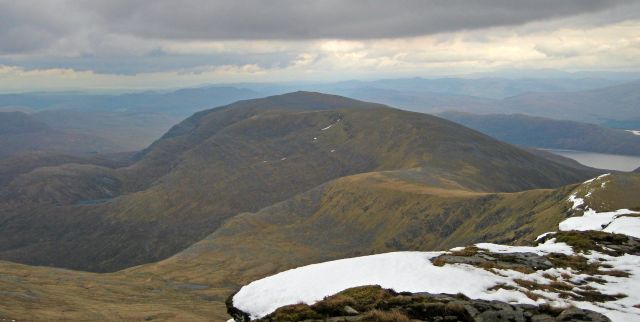 From the summit of An Coileachan, we knew we had the much maligned long walk out ahead of us. However, the ground was not too damp and the heather not too deep so the going was ok. Still, we had had enough of trudging and chose the landrover track through the plantation on the E side of the Abhain an Torrain Duibh instead of the outward path.

This is the route we would have taken had we followed the estate "suggested route" in the first place. This did involve about 70m extra ascent but it was well worth it to be on solid ground and the final 3km were covered in half an hour. From the last Munro to the car was about 2hr 15mins in total.

A great day out

and cheers to Stomper for being such good company.

Nice report & photos - having done Sgurr nan Clach Geala in the clag in mid-April it is good to see its true nature.

and some excellent pictures. the views look tremendous. Nice to have another walkhighlands member as company as well.

Yeah views were great. As ever with a bit of haze and high cloud, it is hard to properly capture views with a compact camera. The long distance ones - Suilven etc. and An Teallach needed quite a bit of post production to bring them to an acceptable level of clarity. Maybe one day I'll carry my DSLR but I've been saying that for a while now...