I was a dog down through a paw injury, almost put off by the risk of cows in the field on the tourist route but I today I decided me and my remaining doggy, Millie, would tackle our third munro, Ben Lomond (with Dottie coming along to claim her second munro). As Fly was going to be absent from this one and Millie was far fitter than her sister (who suffers from arthritis) we took the option of taking the Ptarmigan Ridge path up to the top. We started at around 8:30am and when we arrived mine was the only car in the car park, though there were a few cars over in the hotel parking bit. Expecting a bit more of a breeze, I soon ended up taking off my jacket as away from the loch the sun was blazing down and there was barely a breath of wind. I was certainly pleased with the route, the views were amazing despite the haze that and I saw very few people. We weren't rushing and I took plenty of time to take photos. It was fairly steep going but the path was clear and easy to follow and we were soon high up above the loch. We reached the ridge and followed it along to the lochan where we stopped for an early lunch, this was where the wind was starting to pick up a bit, before continuing on to tackle the climb up to the top of Ben Lomond. This bit was steep, and it was hard work up, but I was glad I was going up it and not down as I would much rather have a hard climb up than down! There was a little issue with a Westie who wouldn't get away from Millie's rear end when we were just metres from the top, I ended up having to pin her against the rock as she was trying to sit down to stop the harassment but the westie was pushing underneath her and she was starting to lose her balance (and patience). Eventually the guy got his dog when she made it clear she was not happy! At last we could continue on to the top, and I must admit I was taken by surprise to see the summit marker right there ahead of us! We had made it to the top! And what was more, we were alone on the top! We reached the top at 11:50am and started heading down shortly afterwards.

Another walker came along as I was taking photos of Dottie and Millie and very kindly took a photo of us at the summit, a rare photo of me! I had been assured by several other walkers that there were no cows along the tourist route, so I descended that way. It wasn't a patch on the Ptarmigan path, but got us down. We reached the car at 2:15pm, and Millie got to finish her walk with a swim in Loch Lomond. Start of Ptarmigan path, not signposted just straight over a concrete bridge next to a house and follow the path up. 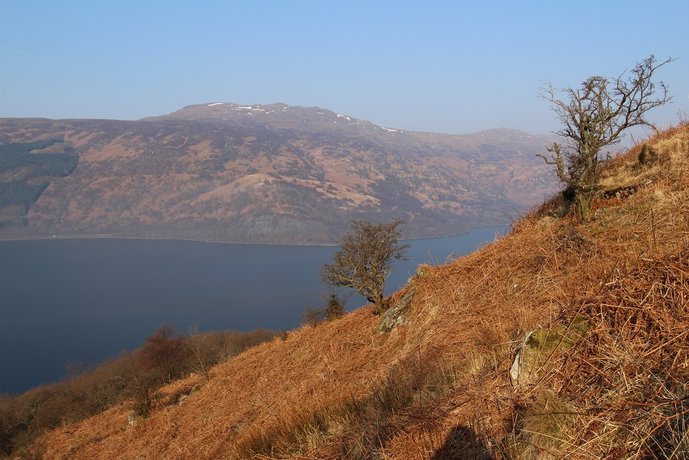 I just liked the trees... 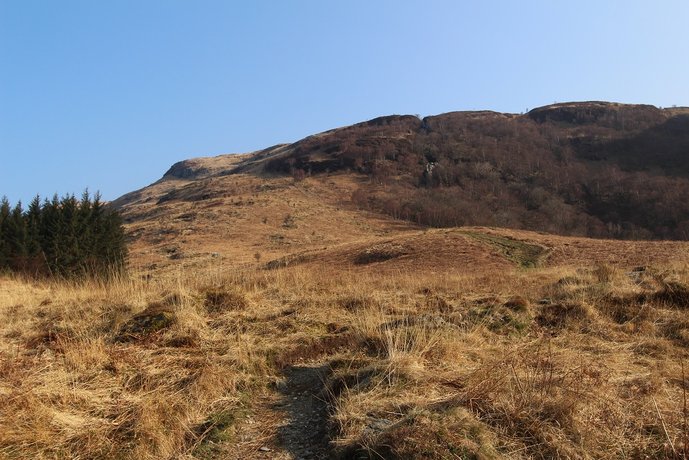 A couple of sheep, but no cows phew! 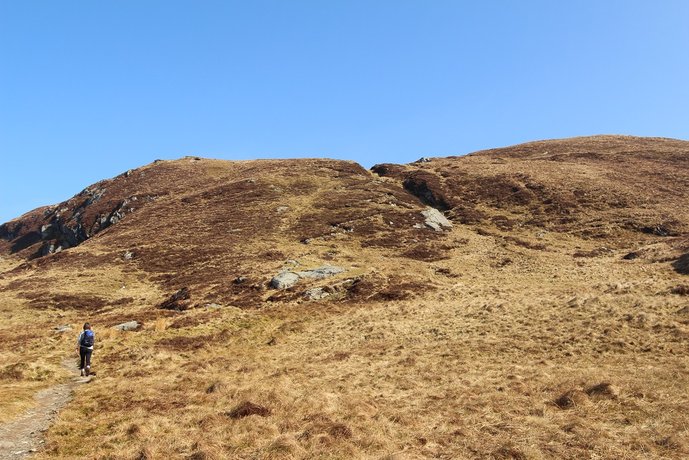 Zig-zag bit of path leading up 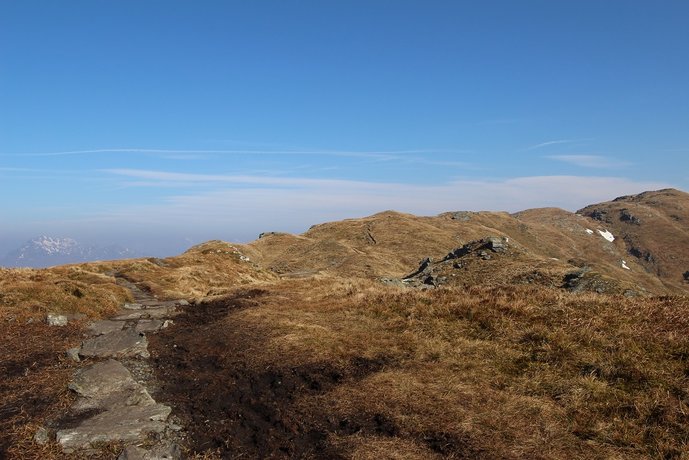 Cool rocks, I took a few photos of rocks! 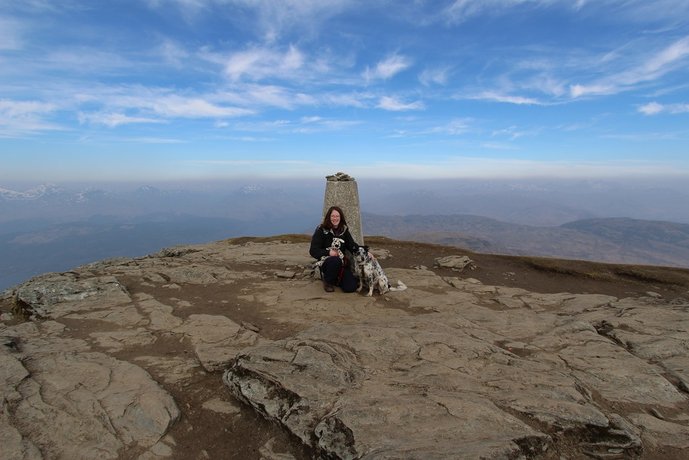 Hope Fly is back out with you soon.

Today was a great day to be in the hills but still pretty cool when I set off on my walk at 6am. Like you it was flat calm until above about 1000ft when at best there was a gentle breeze.

Been up Ben Lomond twice and couldn't see a bloomin thing, not a problem for you today - that looked great.

In all honesty I don't think she could have done Ben Lomond regardless, she may well be out of the munro walks, unless they are easy going (like Mount Keen, she can still do that one). But hopefully she is able to go for any real walk soon as she is going bonkers having to rest!

The wind was blowing stronger on the tourist path up to Ben Lomond, but only for a short stretch. I was expecting stronger wind than what there was to be honest, I wasn't really expecting it to be so calm! I think I timed it right though as the forecast was for the wind to pick up later on. I was just amazed to have a few moments to myself at the top as from the other reports, and considering it was a very nice day, I was expecting it to be mobbed up there!

Well done, I was up there in February when there was still a lot snow

Just a little bit of snow there today, though may well be a different story tomorrow as snow was forecast for tonight!

Nice day for it - certainly more interesting going up one way and down the other. Last time I was up here was with my younger son on his second munro - we descended via ptarmigan which he seemed to enjoy as well - cheers

Definitely got lucky with the weather today, I was asked to swap my days off this week and initially it looked like I was going to have to abandon the walk as every night snow was forecast and then moved back and back and back...leaving Friday with nice weather! I don't have a clue about winter hill walking and have no experience of the area to chance going up with snow cover.

Nice report, when I did it a few years ago From lower down I thought I heard pipes on the Ptarmigan and when we reached the flat section (your photo 9) on the ridge wencame across a guy in full kilt and playing the pipes

What a strange place to come across a piper! No pipers there yesterday, was only a few other walkers so it was nice and peaceful.

Well done on getting out and it feeling isolated, no mean feat on Ben Lomond.

Amazingly I only just walked the Ptarmigan Ridge a few months back, I descended it, and found it to be brilliant.

Great photos of the hills, and your doggies

Hi Katherine, Great to see you on Walkhighlands

Some lovely photos from The Glasgow Ben

Looks like Millie and Dottie enjoyed the experience as well. I'm sure Fly would have loved to join you all ! Glen and Arran love Ben Lomond, but we always come down the Ptarmigan

Hi David! Yup, I finally decided to join the forum after using the site to find walks for years LOL Yes, Millie and Dottie certainly enjoyed themselves, as did I

cant believe how little snow there is up there...great walk!

Yup, I was lucky! Most of the snow was easy to avoid and any that wasn't was soft snow so easy enough to walk through.

The Ptarmigan route is definitely the best route up Ben Lomond in terms of views and interest ....but I use the 'tourist route' back down if I'm short of time and just want an easy route back of the mountain :-0 The views down Loch Lomond and over to the Arrochar Alps from the Ptarmigan Ridge are amazing on a clear day!