Windy, but beautiful day on Ingleborough

Windy, but beautiful day on Ingleborough


Having pounded the muddy fields of Essex all winter, Neill and I needed some ‘ups and downs’ in our quest for fitness before we attempt the Skye Munros in May. Picked up Neill [from work] and set off around 2:00 pm. We should have made it to Chapel-le-Dale by 7:00 pm, but the A1 was closed at Colsterworth [owing to an accident], which resulted in a scenic tour through Stamford and Grantham to re-join the A1. It was 8:45 by the time we got to the B&B; only time for tea, snack and bed.

It had rained overnight which had cleared the murk from the air, but it was much, much colder; there was snow on Ingleborough first thing. After a handsome breakfast and armed with an equally handsome packed lunch we left the B&B and crossed the River Doe for a walk along a quiet lane linking several hill farms. We re-crossed the river just above the quarry, crossed the Hawes-Inlgeton road and made up the path towards Fell Lane.

Once on Fell Lane it was a simple case of following the well-made farm track, then path all the way up Ingleborough. The sun was now making regular appearances lighting up the fells with a patchwork of light and shade. On the way up Ingleborough - Fell Lane

We soon reached Ingleborough summit and after the obligatory trig point photo found a place in one of the shelters out of the wind for lunch. 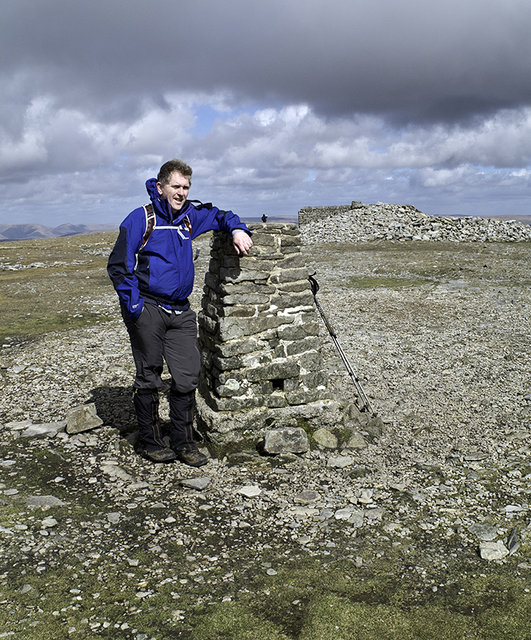 People seemed to be appearing from all directions – just like Charing Cross Station I thought. Most suitably attired, given the biting wind, but some hardy souls in shorts and more than a few in running gear. This was the fourth time Neill had climbed Ingleborough and said it was always much the same.

Before leaving the top we walked across to the NW edge and looked across the valley to Whernside and the Ribblehead Viaduct – amazing views. Then on to do a circuit which would take in the summit of Simon Fell. Walking along the NW edge [of Simon Fell] was entertaining as we were buffeted by the wind and treated to wonderful views to the west and back to Ingleborough. Once back at the three-way junction of paths we made the short, but very steep descent off Ingleborough towards Chapel-le-Dale. By this time there was a steady stream of ‘Three Peakers’ battling with their last ascent; some looking decidedly weary, others as if they were out for an afternoon stroll. I was amazed by the age range and that age was not the deciding factor as to the look; wearied or daisy-like. Somebody had gone to a lot of trouble laying a pavement across the flat boggy region; it certainly made light work of crossing what would have been an arduous part of the walk. Neill commented that was not the case when he first did the ‘Three Peaks’ – 30 years previously.

Before long we were passing through the limestone scenery at the NE end of Raven Scar and down into Chapel-le-Dale. Then past the lovely little church and back along the lane before once again crossing the stepping stones over the River Doe to reach Dale House Farm, our B&B. Dale House Farm and Ingleborough later in the day

We adjourned to The Old Hill Inn on the recommendation of Judith at Dale House Farm – she booked a table for us. Wonderful dinner and great beer.

It was our intention to do Pen-y-ghent on Sunday before driving home, but the weather was vile; horizontal rain, sleet and snow. So we made our way south again only to find the A1 closed at Retford – this time the construction of a new bridge was the reason. By the time we got home it was 18C – we could have been in a different country [weather wise].


Ingleborough & Simon Fell.gpx Open full screen  NB: Walkhighlands is not responsible for the accuracy of gpx files in users posts

Re: Windy, but beautiful day on Ingleborough

Well that was an eventful journey for you guys, shame about day 2 with the weather but still worth the journey if those wonderful shots of day 1 are anything to go by