I tried this hill last September, but the heavy going defeated me - growth is at a maximum at the end of the summer, but Winter's snows flatten the grass so I thought it might be better in April and indeed it was - but this is a hill that requires quite an effort to reach. As I planned to include Beinn Damhain, I wanted to get as close as possible on a track, so I decided on the northern route up Gleann nan Caorann .
The day was clear and sunny, but distant views were very hazy and became more so as the day wore on. There were two other cars parked as I set off up the track, over the railway and past the cows (they always seem to congregate around the first major turn). To straighten the route I took the side track on the R up to a pylon and headed straight uphill to rejoin the track just where the standard route leaves it. The track up the side of glen provides very good going past innumerable intakes. The Graham Meall nan Gabhar with its twin peaks looked very impressive straight ahead, and the whole of the Ben Lui group gradually appeared, the view rather spoiled by the huge pylons that run up the glen - They wouldn't allow wind turbines here so why pylons which to my mind are just as intrusive? - 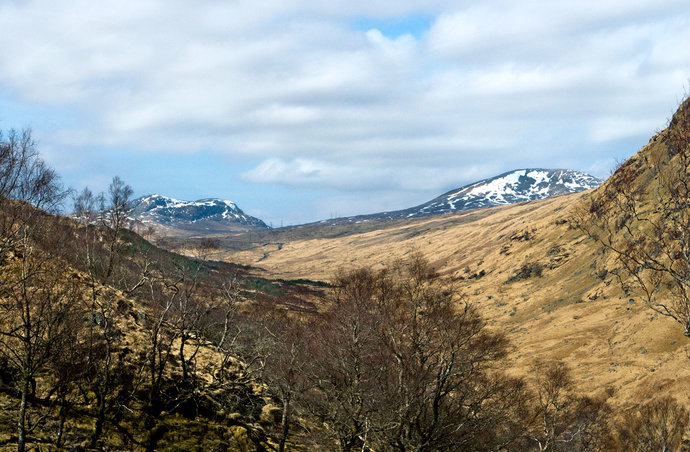 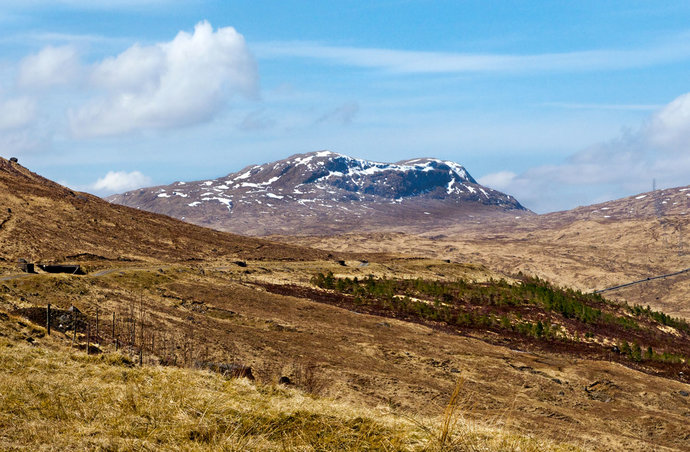 Meall nan Gabhar looks very impressive from this side 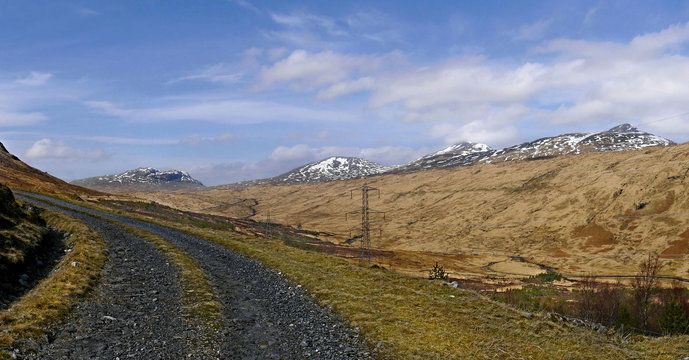 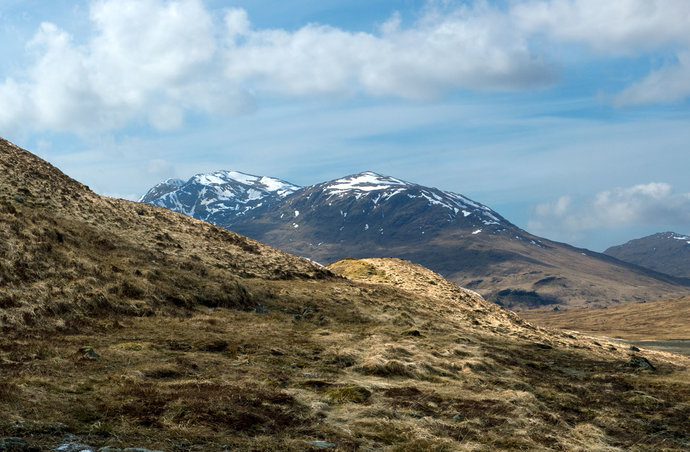 the track deteriorates but Beinn Bhuidhe comes into view
There seemed little point in following this flat track so I headed diagonally upwards over easy angled ground into Coir'an Langart, the broad corrie NNE of the summit.

The whole Ben Lui group from the corrie - no pylons
A number of snow ribbons descended all the way from the summit ridge and I headed up and across to the foot of one - but the snow was soft so I climbed up beside it: nearer the top I ventured back and it was a bit firmer. 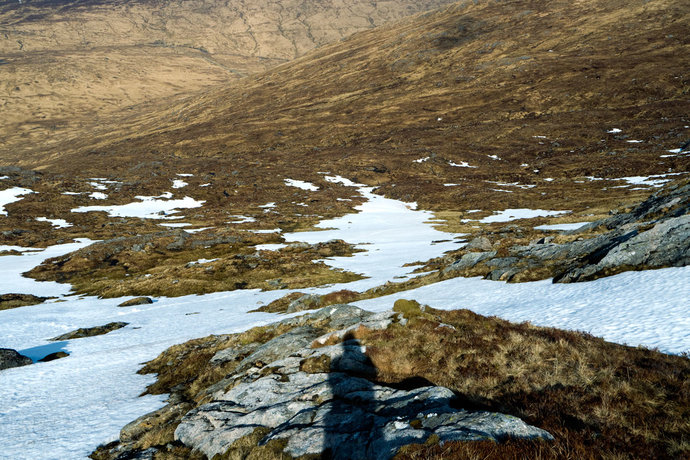 Looking down the ribbon of snow 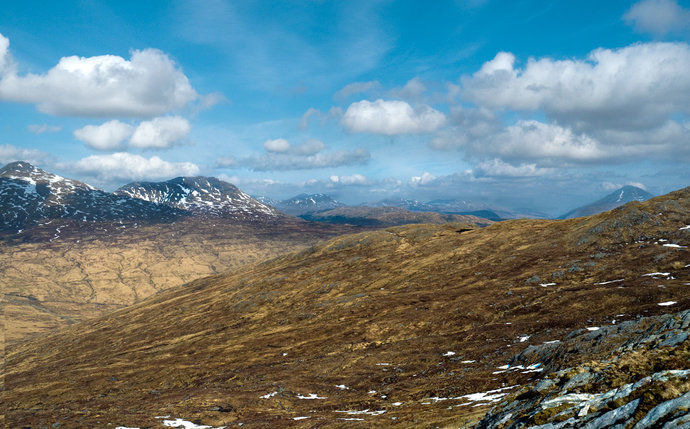 Looking back down to Gleann nan Caorann 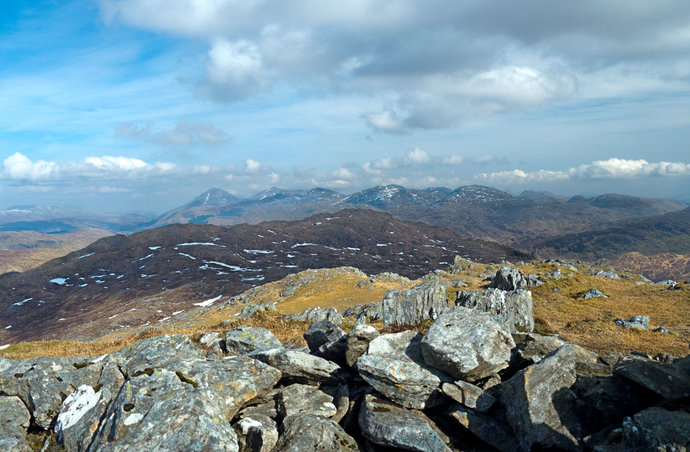 From the summit looking E to Troisgeach - the Crianlarich hills behind 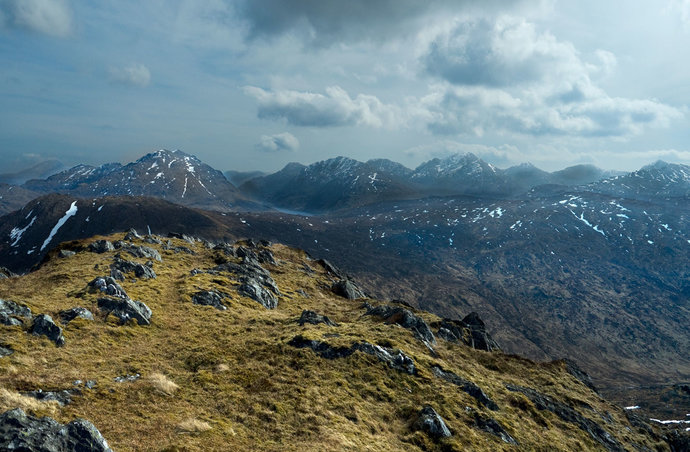 Even in the thick haze the Arrochar Alps look impressive from here. Ben Vorlich and Ben Vane either side of loch Sloy. Beinn Damhain in front 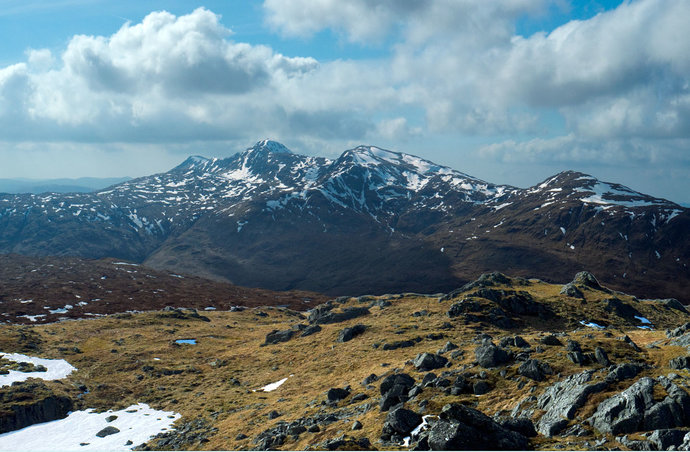 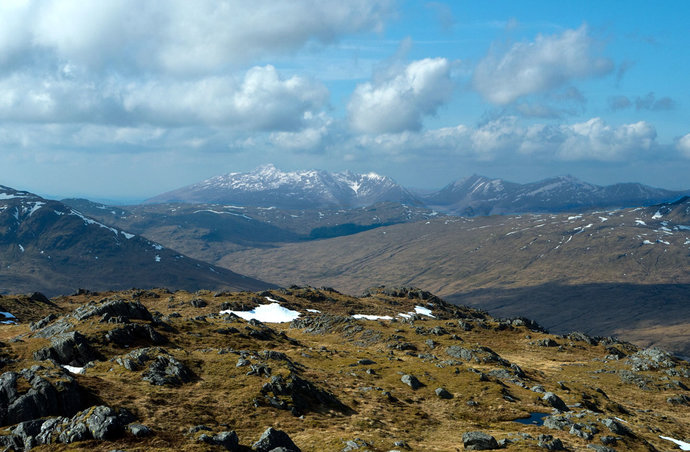 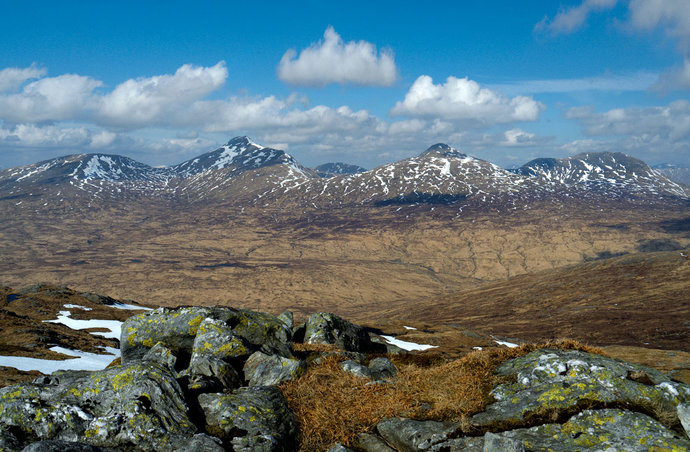 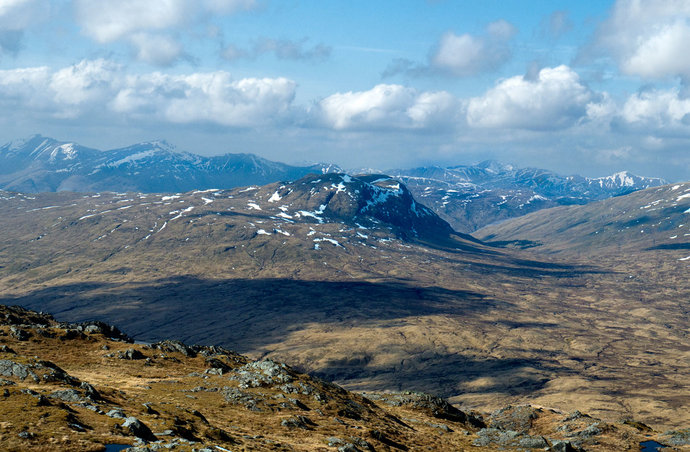 Meall nan Gabhar - the Etive peaks in the distance on the R
I descended the soggy slopes to the col and looked up at Ben Damhain. There is no finesse about this ascent - you just go straight up and I wasn't really looking forward to it. But it was much the best terrain of the day (tracks excepted) and much drier than anywhere on the Corbett. Being a steep N face, the vegitation is stunted and after the intial boggy section I zig-zagged easily up on short grass and heather. I was going so well at the top that I zoomed towards a knoll on the S side not realising the top was behind me on my L

. I got there eventually. 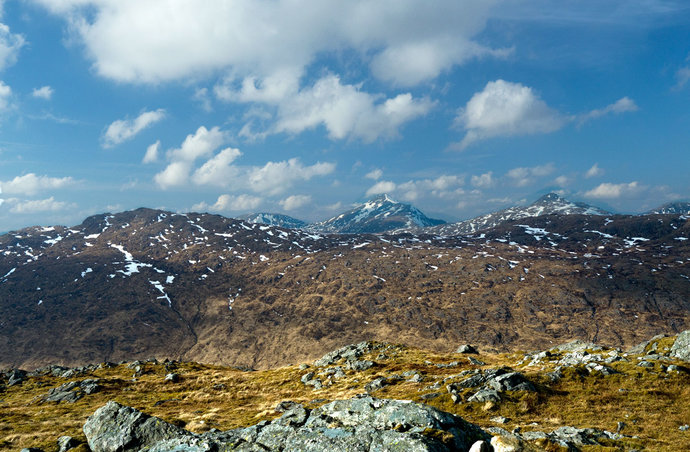 Back to Meall an Fhudair
The lochan looked deceptively close, but there is a lot of dead ground inbetween, sizeable rock outcrops and steep soft snow that I steered well clear of - so it turned out to be quite tortuous and somehow I ended up at the wrong end of the lochan 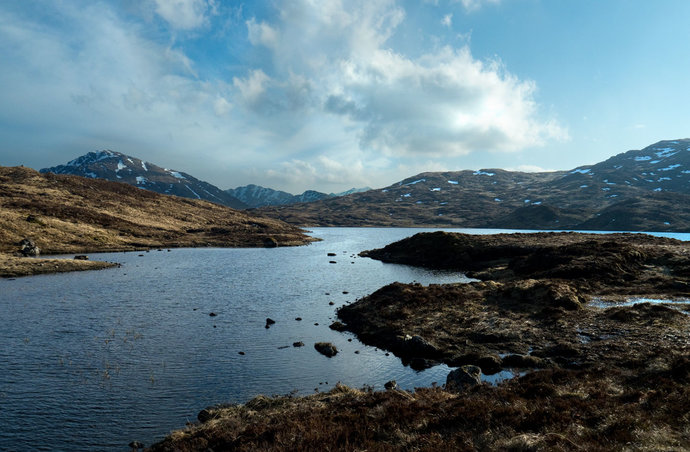 Lochan Beinn Damhain and Ben Vorlich
From here it was an easy if wet descent beside the burn, over the bridge and back along the track past the "stationary" cows to the car.

Re: Meall an Fhudair a hard won Corbett

Ha. I remember the cows well. I think i done a report on this one too. I done a huge detour to avoid the cows as they scare me

Found the summit a wee bit tricky to find in misty conditions. Nice one

Re: Meall an Fhudair a hard won Corbett

Nice day for it - it's a good walk with some fine views. Did the same trip last year - was interested to see your route as I came off the path earlier and headed more westwards whereas you followed the path further then went more southwards - found it steep in places so maybe your route though longer may be better - cheers