Good physio for broken shoulder on Beinn a' Bha'ach Ard

Good physio for broken shoulder on Beinn a' Bha'ach Ard It was a last minute decision to climb this local Corbett prompted by a window between my son and family leaving in the morning and my daughter and family arriving in the afternoon. After three days of gorgeous spring weather Friday was to be similarly balmy before a swift return to winter. So I wanted to make the most of it while it lasted. Remarkably Rob and Mary were free and happy to do something that would allow me to be back in time for my daughter arriving at 4.30.

This was to be Mary's first hill since an accident cycling to work when black ice left her with a nasty injury to upper arm and shoulder, with two fractures and ongoing physio to restore full function. She wasn't sure how her injured arm would manage a pole and was understandably nervous about walking on hard-packed snow but was keen to give it a go. Considering this Corbett has a reputation for being more challenging than its Munro neighbours full marks to her for determination and bravery!

With this and our time factor in mind we reduced the length of the walk from the WH round to a straight up and down from the power station, driving in from the locked gate when it opened at 9.00. I wasn't sure about parking at Culligran but found a large parking area on the left side of the road at the point where a wide vehicle track turns off to the right and heads in for several kilometres following the course of the Nealy Burn.

This was also my first hill since my mother died, a day I thought I'd struggle with as I'd been out on the hills five weeks ago today, unaware she was so ill. She died exactly a week later, four weeks ago today. But I know she would have wanted me to keep 'climbing mountains' as she used to tell the carers I did... and having the distraction of Mary's come back from injury was a good thing to focus on to stop me being too emotional on the day. It was good to have Rob and Mary's son Matt along for the climb - this being, I think, his first Corbett but not first Munro. We wondered why this track had to be so wide leaving such a visible scar on the landscape, but it did provide us with easy access until the point we decided to leave it to follow a wet path which came and went and came and then went completely. We headed over tussocky grass and heather in the direction of the col between Creag a' Gharbh-Choire and Beinn a' Bha'ach Ard. As we climbed we spotted a few deer starting to cross the wide dip between the hills. I didn't want the dogs to get wind of them so we stood still and watched and a few tentative hinds turned into a steady stream of hinds which just kept on coming. Fortunately the dogs didn't see them, and because they were upwind of us they didn't smell them either. At their age they don't have the stamina for a long pointless chase but they would have felt obliged to try - so this was definitely a good thing! 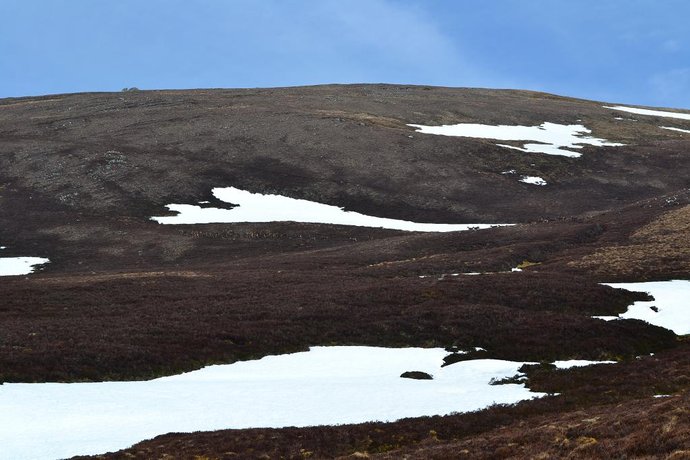 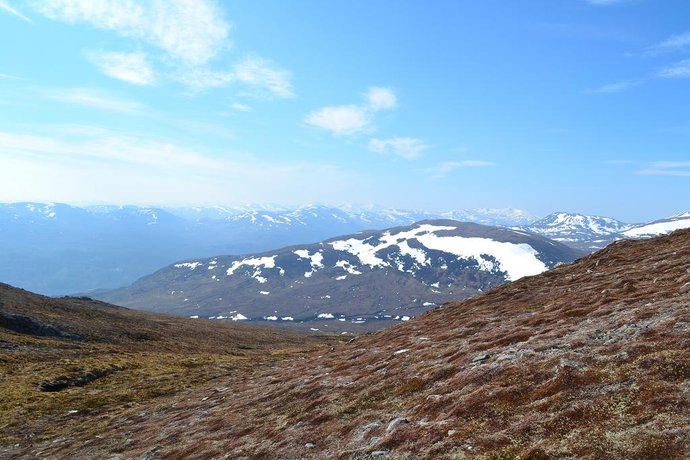 At the col we turned left up the slope which was briefly steep but easy enough going over stones, moss and grass. There was a welcome windbreak at the summit where we huddled out of the wind for hot drinks and ham rolls while the dogs had their carrots and some sneaky pieces of shortbread because geriatric dogs need a bit more for energy - and they seemed happy enough with that arrangement! I'd been looking forward to the views from the top knowing on a good day you can see the Torridons and Fannichs from here. But it was too hazy to see as far as that and we could barely make out the Beauly Firth, never mind see the Kessock Bridge which I think Black Panther had managed to photograph. Oh well you can't have everything and it was a beautiful (if windy) day, despite the lack of crystal clear visibility. North west from top over Strathconon North east from top to Sgurr a Phollain We stayed at the top about half an hour before setting off down the west ridge to vary the descent a bit and enjoy the views to the west. The last hill I was on we were in strong wind and somewhere near the top my map disappeared off never to be seen again. So this time I didn't tuck it into my rucksack waist strap but put it inside my camera case. But whenever I took my camera out the wind was so strong it turned the empty case inside out and buffeted it about and guess what my map disappeared again without me seeing it go. It was only a print out in a polythene cover but I felt guilty about contaminating the hillside (again!) with non biodegradable litter so turned round and retraced my steps up the hill to see if I could find it. But there was no sign of it and I imagine it was already well on its way to Loch Orrin. I will have to work out a more effective way of tethering my maps in windy conditions.

When I turned back down to catch up with the others I noticed a plume of smoke from the hill opposite. This was a slightly deja vu moment after the devastating fire Moira and I witnessed in Glen Lui last June but with all the snow still lying up there it didn't pose the same threat. I didn't know until later there were several wild fires over those few days following the warm spell and spread by strong winds. 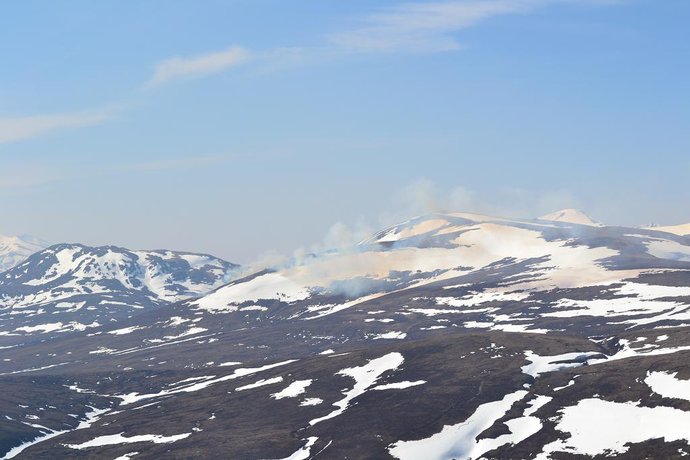 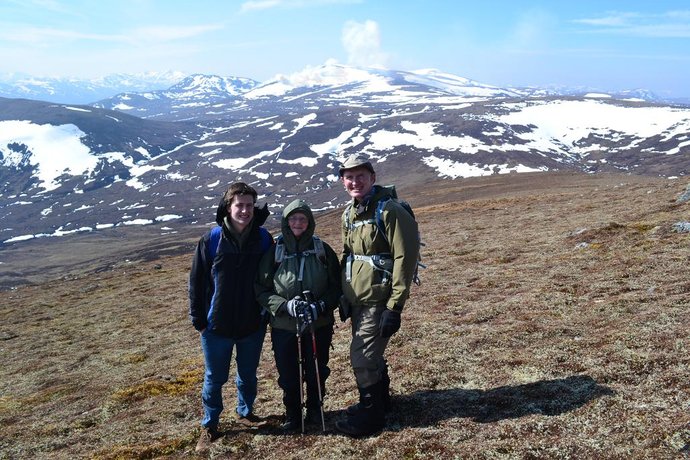 Whenever I asked Mary how she was doing she said she was doing fine and I didn't hear one complaint from her all day. She doesn't have full movement in her left shoulder but was managing to use her pole enough to be useful on the descent which shortly after the next photo became steep, uneven and through knee-high heather. After the steep section the gradient eased and we picked our way through a boggy section before crossing the burn at which point we picked up a muddy track, too wet to walk on but we followed its general direction towards the Nealy Burn until we saw the wide vehicle track in the distance. Once on the track it was a quick march back to the car, in perfect time for me to be home to make the tea for my daughter arriving. 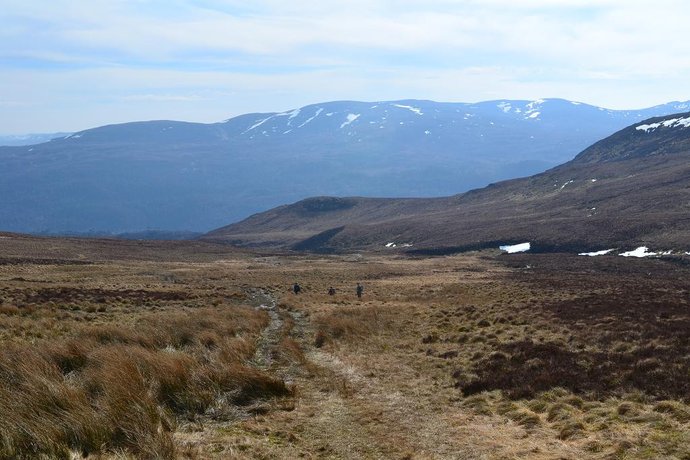 Once through the gate at Inchmore we stopped briefly to take a photo of the hill we'd just climbed. A great hill for a short day and exactly right for the time we had. Mary commented she hadn't done her physio exercises which she was supposed to do three times a day so was going home to do them! She seemed to be none the worse for her adventure, although her arm did complain a bit over the next few days.

Beinn a' Bha'ach Ard from Inchmore Nice day you had there DP

Like Colla I have two that love a pointless chase too

A nice hill to get back into the swing of things DP, good to see you and the dogs out again

Nice to see you enjoying the great outdoors again

You had a lovely day for BBA, the hill is well worth it. It's my fav local Corbett. I never did the whole circuit though, like you, just popped up to the summit using the shortest approach.

The new nasty track is a mess

I used to pick mushrooms in the woods above the Power Station, but no more.

Even if restricted by haze the views look great.

Enjoyed reading this - its another hill on my ever growing list of Corbetts, but at least its close at hand

It sounds like it was good physio for the heart as well as the body - and the dogs look very happy. Wish mine would give up on the pointless chases - but there's always the hope that the next chase will be successful

They're hard wired to chase, whatever the odds.

Like Colla I have two that love a pointless chase too

Aye, they're all the same. I'm convinced my two think of hill walks as their pack going out to hunt and right at the end of the walk Jack found a very dead hind and proceded to drag it down the hill like he expected me to shove it in the car for him to deal with later. The poor old chap when I put him on lead and told him to leave it.... but boy did it stink!

BlackPanther wrote:Nice to see you enjoying the great outdoors again

You had a lovely day for BBA, the hill is well worth it. It's my fav local Corbett. I never did the whole circuit though, like you, just popped up to the summit using the shortest approach.

The new nasty track is a mess

I used to pick mushrooms in the woods above the Power Station, but no more.

Feel I'm constantly following in your tracks BP and always read your reports before heading out.

Agree about the track!

litljortindan wrote:Even if restricted by haze the views look great.

You're right - can't complain at all and fortunate to have this hill so close to home.

Huff_n_Puff wrote: It sounds like it was good physio for the heart as well as the body

Hit the nail on the head there Liz - hills are great therapy for sore hearts.