A DIY project in Dundee that's grown arms and legs has interrupted normal hill service, but as the great Easter weather was drawing to a close we couldn't keep up the painting, joinery and sundry soul searing slavery, so skived off for a day in the hills

. Turning adversity into opportunity we decided to pick up a couple of hills we'd missed when we lived in Dundee (Cruach Ardrain and Beinn Tulaichean) and to do them from Inverlochlarig which would take us to an area I'd never visited.

For some strange reason – perhaps a brain addled by paint fumes – I didn't have any great expectations of these hills. Walk Highlands describes Beinn Tulaichean as an inconsequential Munro, and Cameron McNeish thinks there isn't much to recommend the ascent from the south east. Who am I to disagree? – Well I do, in my opinion you're both wrong, but thanks for leaving me to make such a lovely discovery for myself

The road to the start of the walk seemed obvious enough – a left at Lochearnhead then a right off the A84 at Kingshouse for Balquhidder – only there wasn't a right off the A84 … we didn't have a magnifying glass for the map so didn't notice it's actually a left off the A84 that goes under the main road to get to Balquhidder. A quick detour to Strathyre and back along a very slim single track road through some forest – very picturesque – to find the road we should have been on. From Balquhidder to Inverlochlarig along the side of Loch Voil was beautiful, people wild camping by the loch – beautiful calm reflections in the water in the gentle hazy light of an early Spring morning.

A taster – we hadn't even started and this was just stunning 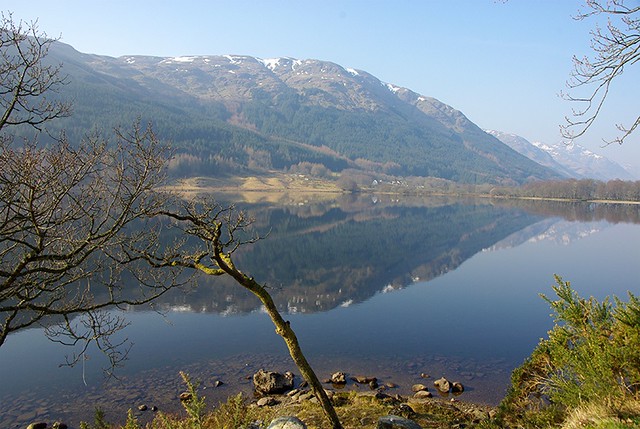 For 5 mins ours was the only car in the spacious car park, but before we'd booted up 2 other people joined us, also heading up Beinn Tulaichean. We all left the car park about the same time and headed off for the path to the west of the farm. For once there was a very good map at the start of the route showing exactly where to go so none of the usual faffing about getting to the start of the walk. The Walk Highland description mentions hydro works, we didn't see any sign of them and the route through the farm steading was very well signposted. There were lots of livestock around so B&B were duly on the lead – where they had to remain for a long time – there were sheep quite high up the flank of Tulaichean. They took this indignity stoically and gave Roger a helping paw up the hill until the sheep danger was passed.

. The other walkers continued on the path – and we didn't see them again.

Cattle blocking the path to Tulaichean 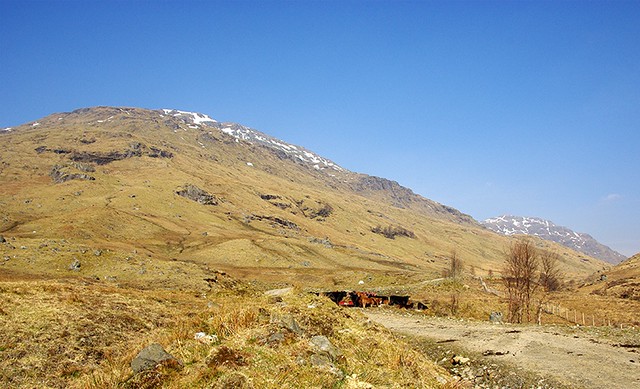 Initially it was straight forward climbing, a warm day soon had us shedding layers and I was just wondering if we'd get down to the base t-shirts when we got high enough to feel the wind – a very welcome breeze – to begin with.
As the landscape opened up we started to get good views … 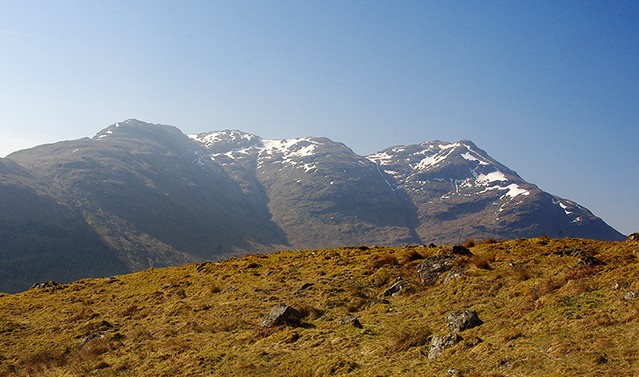 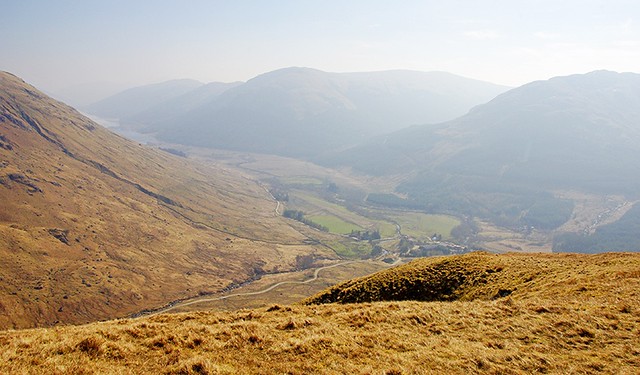 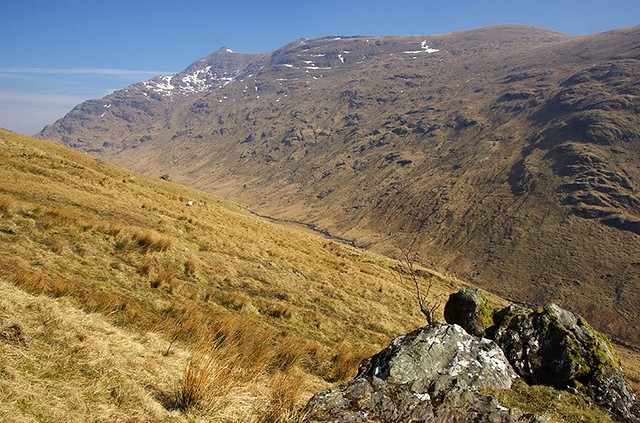 As we got higher the going got steeper and the wind got stronger and colder. The layers came back on and the steepness made me realise how foolish I'd been to forget my walking poles and to believe that all the running up and down stairs and step ladders would keep me hill fit – it didn't. This walk was proving "challenging" – for want of a more accurate phrase.

Still there were compensatory photo stops … 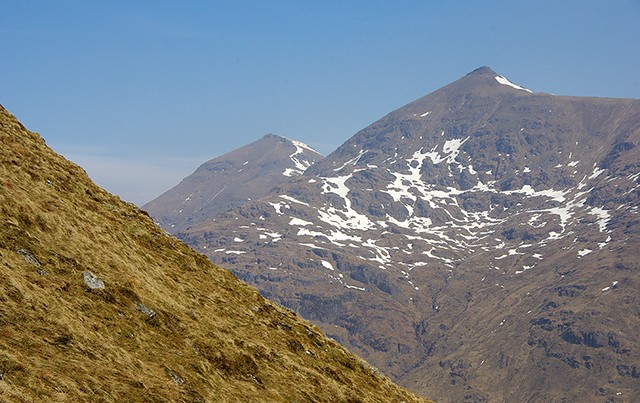 Looking back to Loch Voil 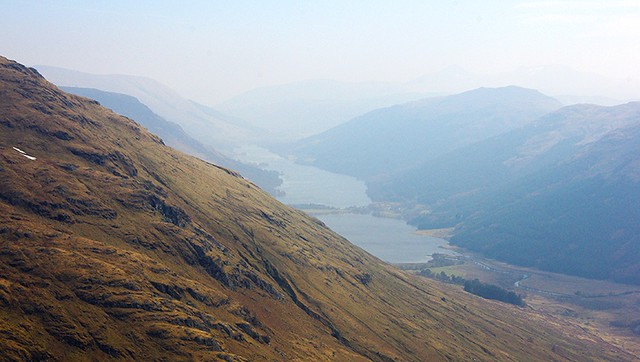 Once onto the ridge a path appeared, which skirted the cornices (fortunately since we'd decided not to bring the crampons and ice axes) and led onto the summit of Beinn Tulaichean. 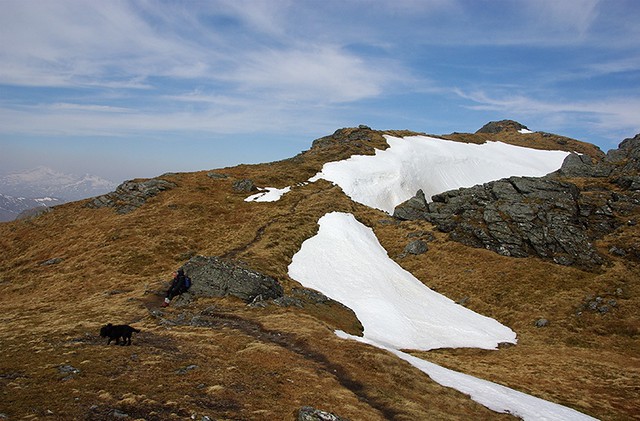 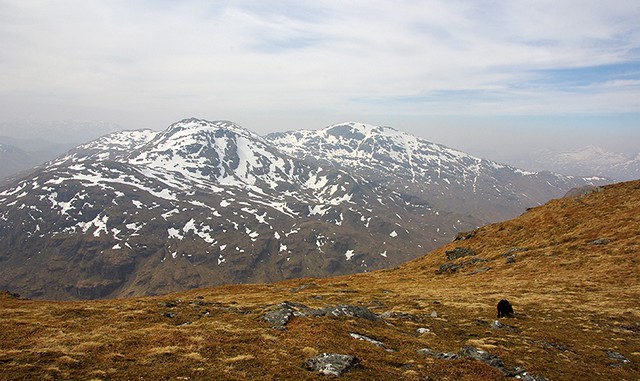 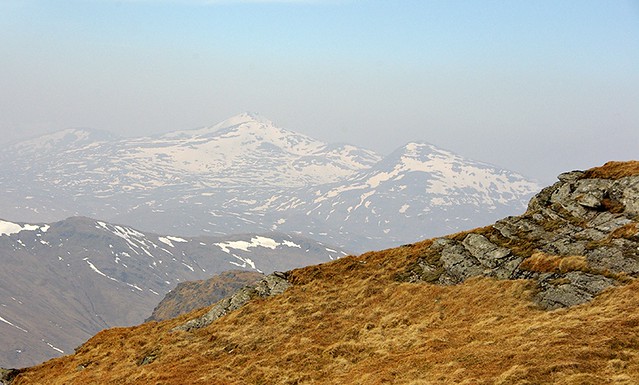 Lazing on the summit 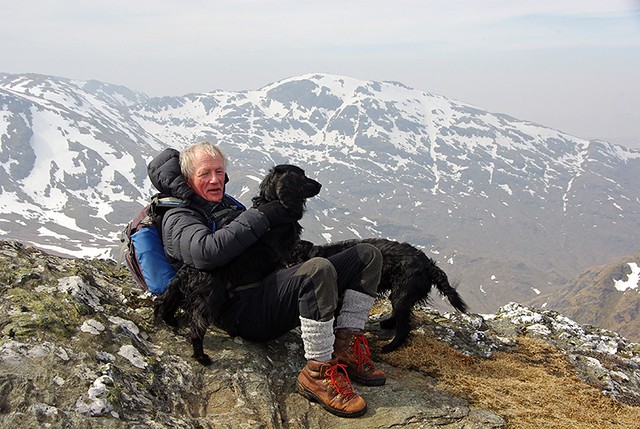 Posing with the big boys 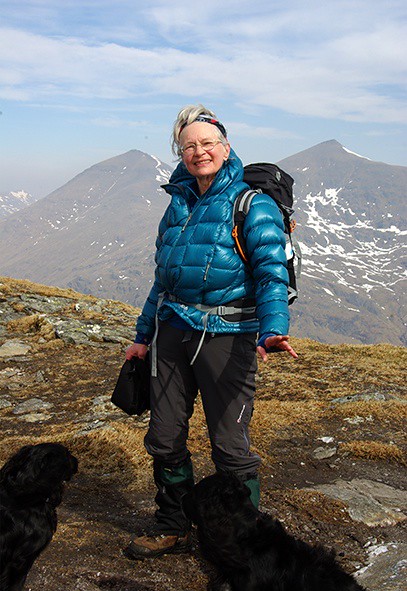 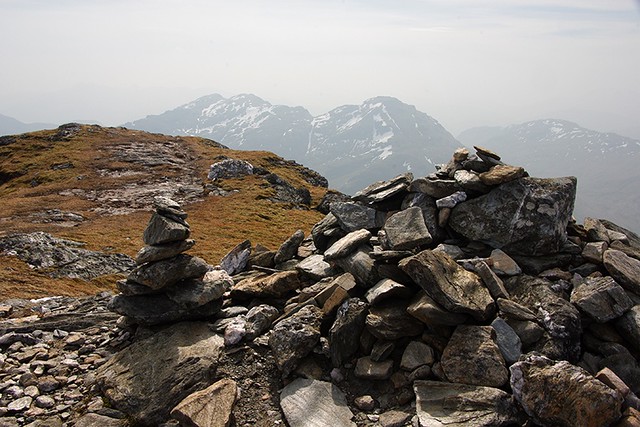 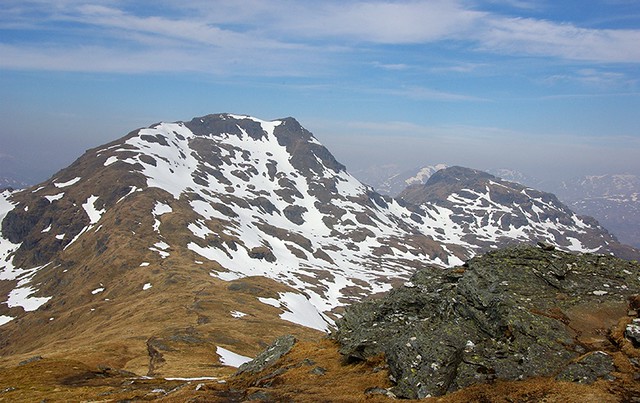 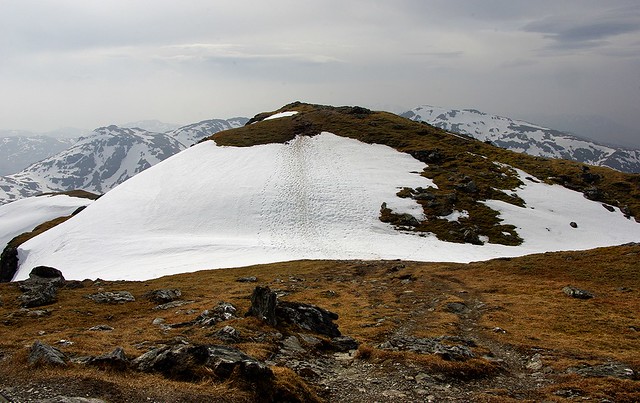 We headed out of the wind and down to the bealach to find a sheltered spot for lunch. The route to Cruach Ardrain looked very straightforward – as long as the snow patches didn't require anything clever. They didn't, the snow was soft and not deep and we took things carefully. As we neared the summit of Cruach Ardrain we met someone who was just heading off, the only person we'd seen since leaving the 2 walkers we'd met in the car park.

On a clear day the views from here would be superb, with vast areas of the west central highlands in view – but the day had become increasingly hazy and the views were limited. Clouds were moving in from the west and our good Easter weather was drawing to a close. 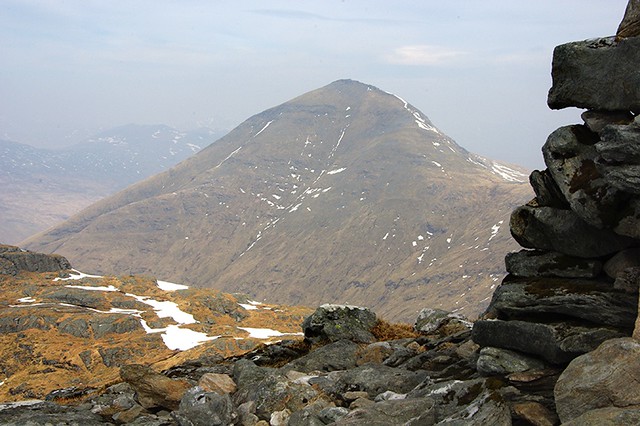 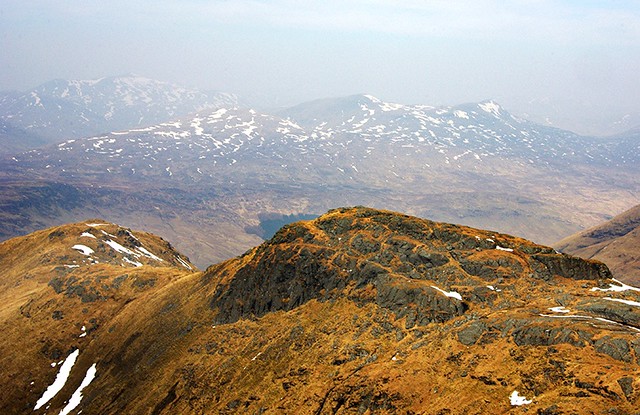 Looking back to Beinn Tulaichean 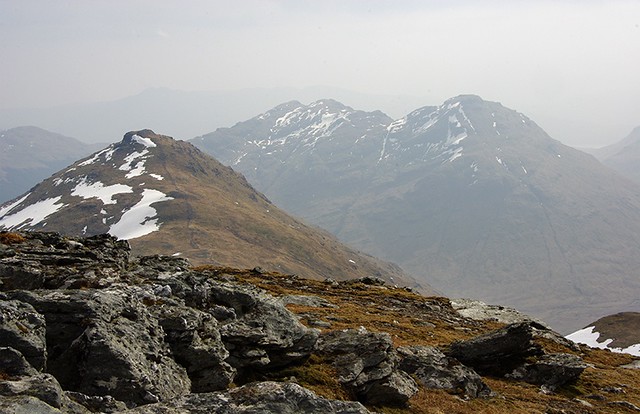 We went back to the bealach between the 2 hills to head back down to Inverlochlarig Glen. There was considerably more snow on this side of the hills than we'd encountered all day, so we zig zagged our way down between snow patches, probably resulting in a more time consuming descent than would otherwise have been necessary. We soon caught up with the high grazing sheep and the dogs lost their freedom once more.

A final view of Cruach Ardrain 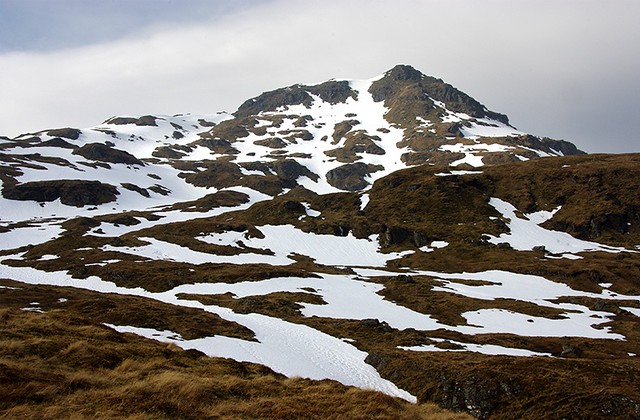 Once in the glen it was an easy stroll back to the car park, then back to Dundee and a quick change before spending the evening with friends over a great meal and a few (???

A fitting end to a day that had exceeded expectations.

Don't understand why these two are so under-rated. Even with nil visibility I enjoyed them and for that reason appreciate your lovely photos to see what I missed!

That looked most enjoyable despite the haze

Thank you for the great photos and report. I will be up there tomorrow, hopefully ticking these ones off. DIY projects are a drag. Spent many a day doing DIY when I should have been outside enjoying the great outdoors.

Borderhugh wrote:Thank you for the great photos and report. I will be up there tomorrow, hopefully ticking these ones off. DIY projects are a drag. Spent many a day doing DIY when I should have been outside enjoying the great outdoors.

Hope you get a good day for these two, I think RH is right about the bogginess, the route we took was relatively dry. Thanks for the commiseration over the DIY, one of life's less interesting chores

rockhopper wrote:That looked most enjoyable despite the haze

We once had an abortive trip from Glen Falloch many years ago and I have memories of the boggy trudge out. When we did get up there it was worth the wait

dogplodder wrote:Don't understand why these two are so under-rated. Even with nil visibility I enjoyed them and for that reason appreciate your lovely photos to see what I missed!

Thanks Kathleen, they certainly gave us a great day.

Nice! Thanks for sharing, these two have been on my radar for years, as I drive south after trips further north, good to see what they're like properly.

I guessed the date you did these without looking, as I drove south through most of the west highlands from Ullapool that day and the haze was pretty remarkable.

Mal Grey wrote:Nice! Thanks for sharing, these two have been on my radar for years, as I drive south after trips further north, good to see what they're like properly.

I guessed the date you did these without looking, as I drove south through most of the west highlands from Ullapool that day and the haze was pretty remarkable.

Yes - the haze gives a magical appearance to the hills, but makes hills identification difficult

I'd really recommend these two from Inverlochlarig - its a lovely route in. Enjoy them when you get round to them

Nice area this, just home from a couple of days down there. Heaps of sheep and newly born lambs about meaning dogs were leashed up a lot. Sare shoulder now

Great photos and a lovely account of your day in the hills
thank you very helpfull for a novice.