Arranged to meet up with my old mate Andy and his employee Richie for this twin munro swoop. It was a Tuesday so Richie wasn't complaining getting a day away from the building blocks, however Andy did tell him near the summit he's be working Saturday. Being from New Zealand Richie took it in his stride much like the walk in general, kitted out in caterpillar boots and a works jacket!
0900hrs and we met in the car park and got after it along the road and skirting the River Traligill. Andy had been as far as the caves previously but had turned back due to weather, I had good intentions of having a look on the descent. 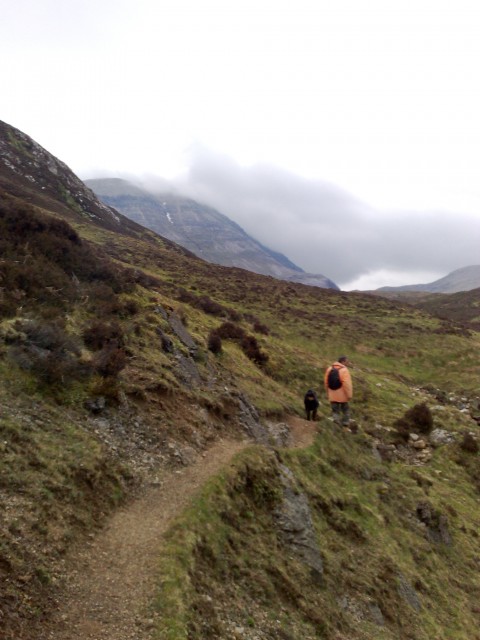 Andy's dog Isis was on the team for this one. This 4 year old Rottweiller was sniffing out the trail ahead, either that or the scent of fear from the walker ahead. Behind her you can see the low level cloud surrounding the peaks that prohibited our views for the day, it was to get worse. 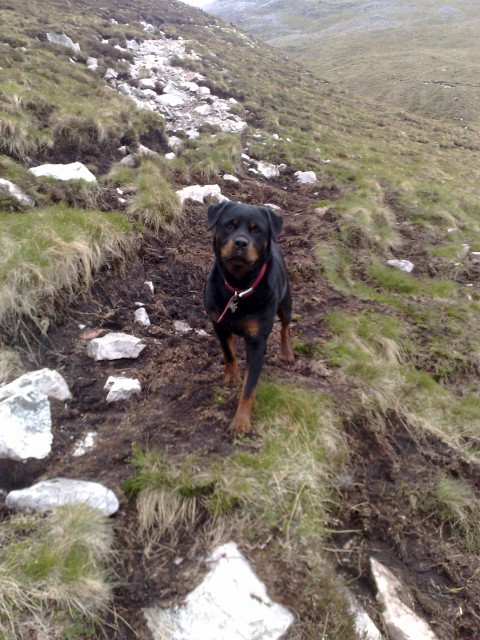 As we swung north east and the gradient increased we saw some nice wee waterfalls. 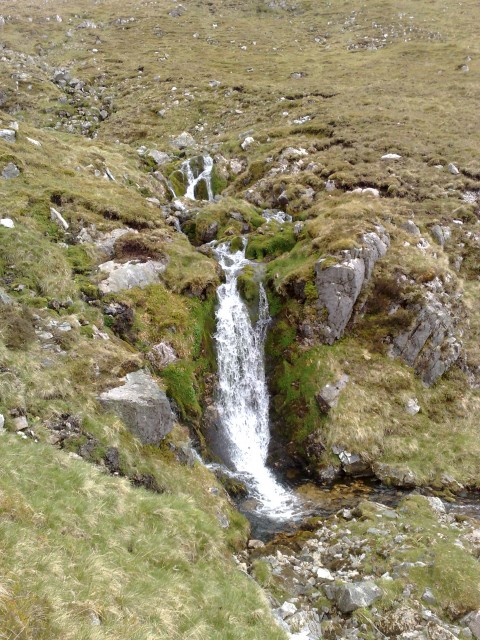 Isis was now conserving energy at every opportunity, as instructed by Andy! 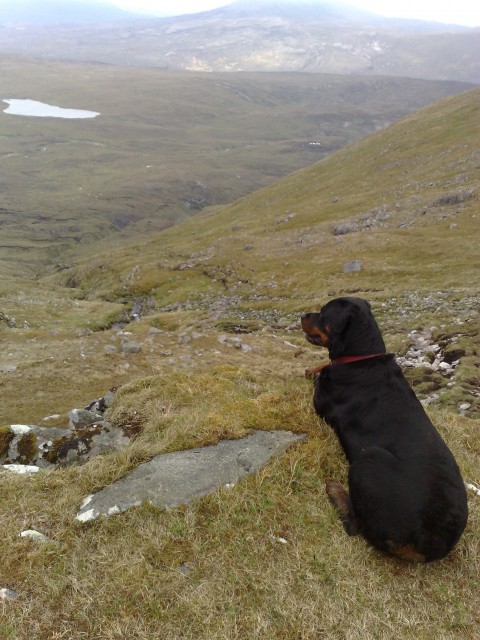 Up ahead we could see what looked like a descent scramble onto the ridge between Beinn An Fhurain and Conival and wondered if we might have to offer Isis some assistance up, but as often as is the case it wasn't as bad when we got there. We gathered our thoughts when on the ridge and our mascot got a drink. 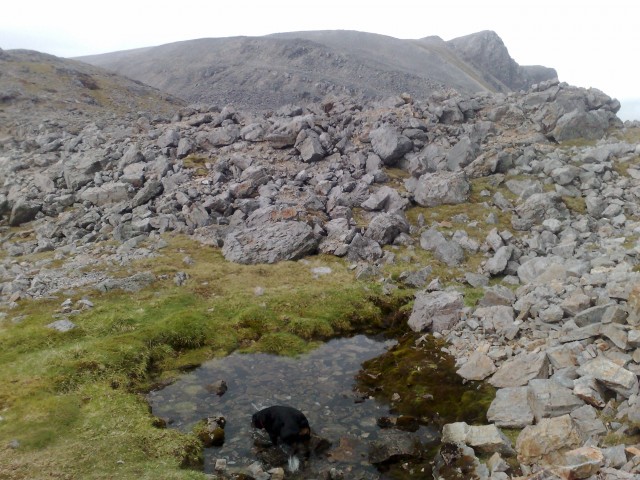 So around a kilometre of rough ascent to the summit of Conival and there is a path of sorts which takes the edge slighty off the hard going rocky terrain. Looking back down en route up. 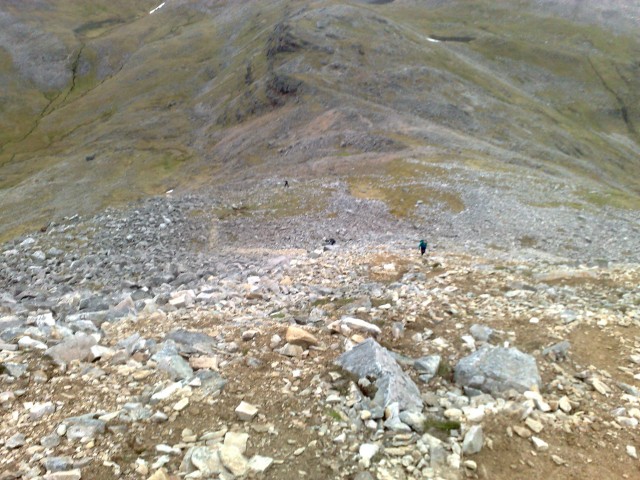 Curling round below us at the start point was Loch Assynt. 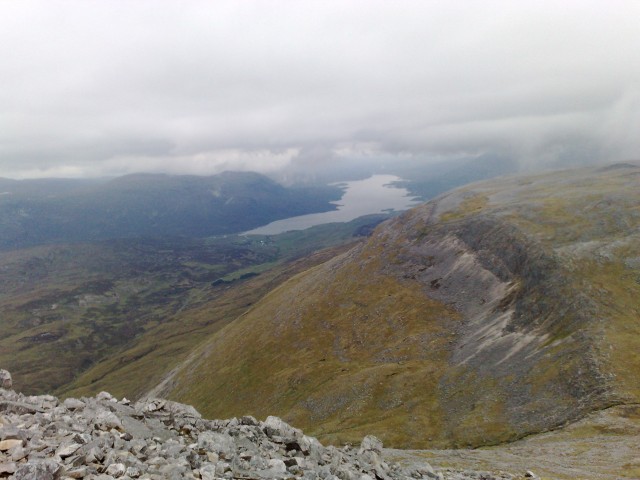 We were soon engulfed in the low cloud. Approaching the summit it was a bit easier going with a defined path. Care was taken with the western crags and poor visibility. 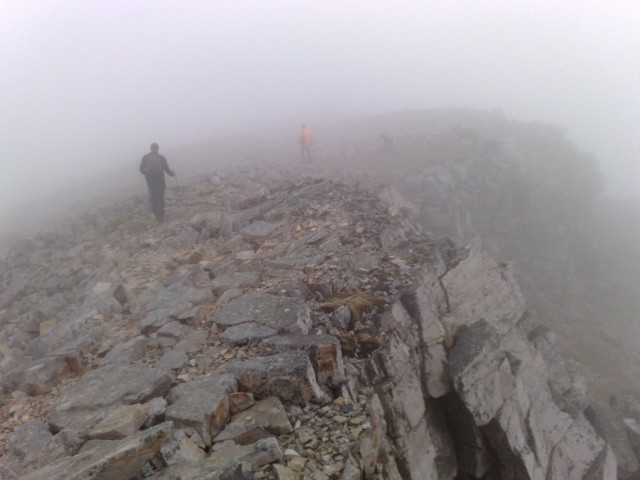 Three hours of slog and we hit the summit of Conival with its wind shelter. We had a sandwich and checked the dogs paws as we saw blood on a rock. Her feet were a bit raw (worth thinking about if taking a dog with the rocky surface). 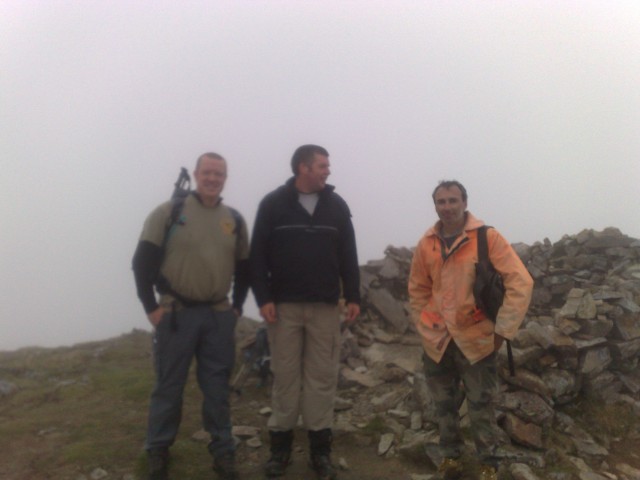 Not much to be seen so onwards along the ridge to Ben More Assynt. 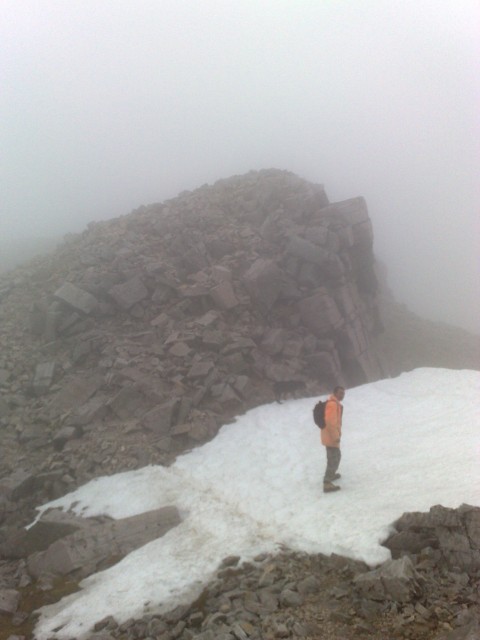 Not the kind of image you want when coming through the clouds lol. What a lovely dog she is though, really.. 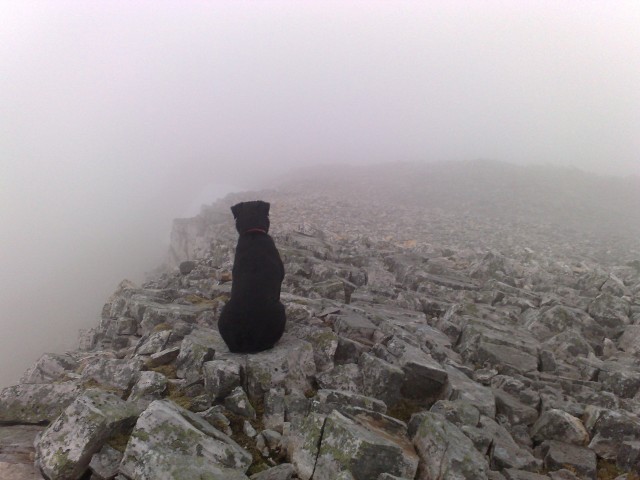 Another hour of hard going walking and we were on Ben More Assynt where we had lunch. I've seen bigger piles of dog mess than this cairn. 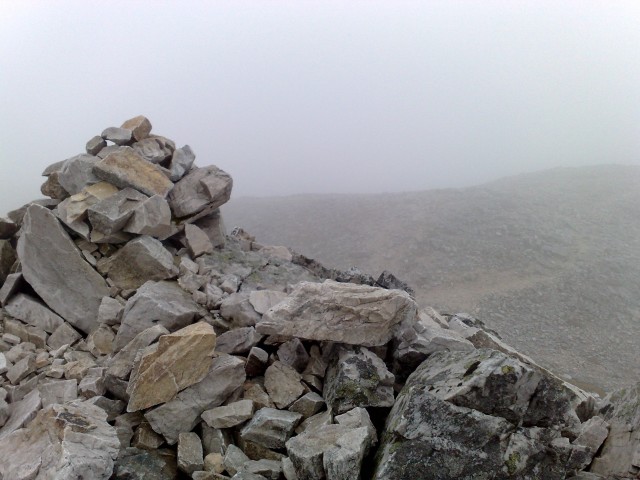 On the way back down we could sense the type of day it would end up, beautiful! Typical! When you get down off the hill and all that jazz. Unfortunately the blanket of cloud hung around until around 1700hrs. 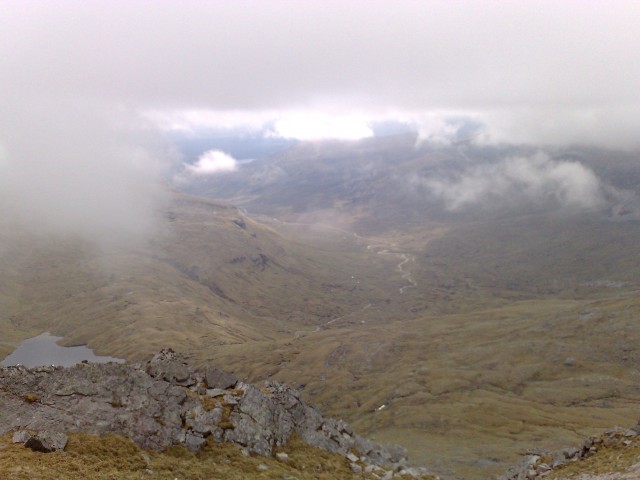 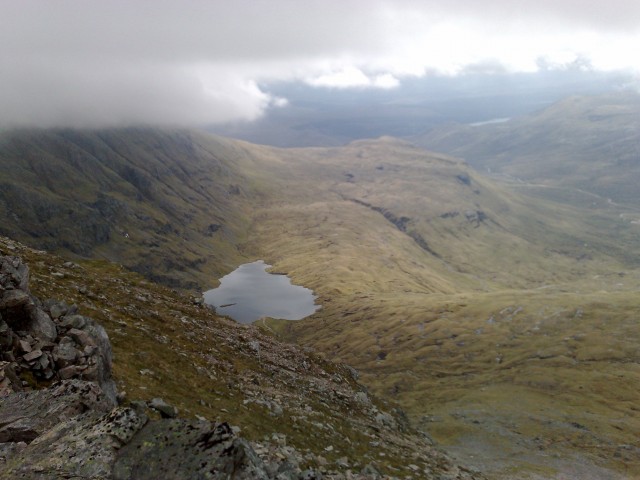 Our feet were a bit tender on the way back along the river so we took a rain check on the caves. Like I said, around 1700hrs and the sun was beating down on the Inchnadamph Hotel and surrounding hills. 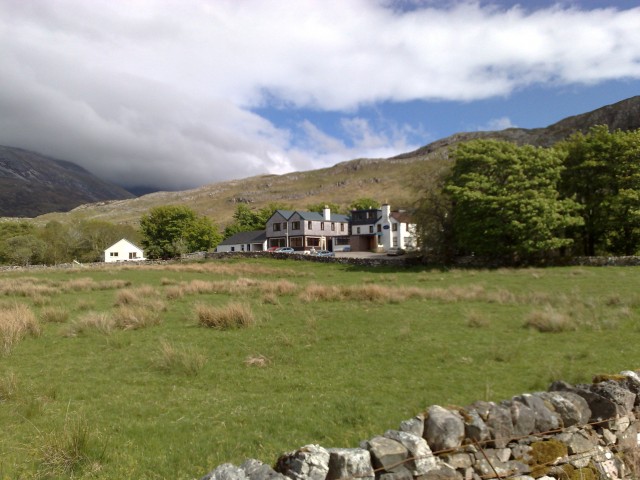 We sat in the car park and admired the views before the lads and Isis went off back down the road. 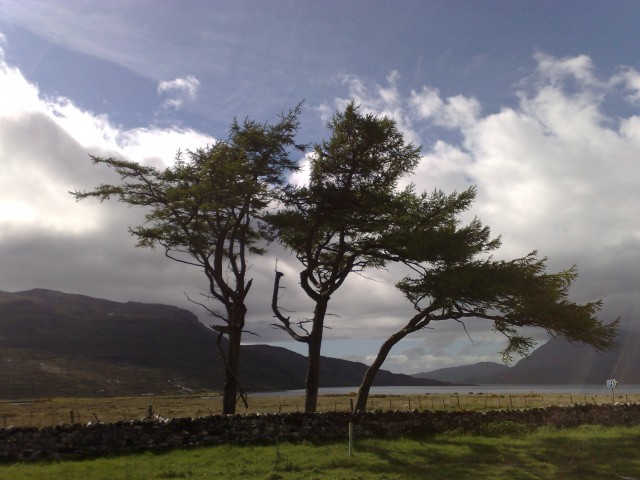 My intention was to do Canisp in the morning after a night in the hotel but the cider put paid to that! Stac Pollaidh was much more achievable!

Nice report sid.
Brings back memories of me doing these two in the clag last year. I remember looking up at the butresses in picture 6 and thinking I would have to climb that but in the event it was an easy walk up through the rocks. The walk between Conival cairn and Ben hope was horrible underfoot and there was a cold wind blowing and I was in the clag

I was glad to get back to conival. Similar weather to yours

Nice pic of the hotel

Cheers Monty,
Aye the terrain certainly leaves you vulnerable to an ankle injury if you don't literally watch every step!
Not sure if you've stayed at this hotel but I would highly recommend it due to the service and easy going nature in the place. I'll be back for sure to get these pesky Corbetts!!

Thanks for those pics and report Sid - I'll hopefully be doing those 2 in less than 2 weeks so very useful and timely info for me! That dog must have given a few people a turn really looming out of the mist!

Hi MC,
You better get some extra stiff insoles for your boots because the terain underfoot between the two summits is the worst I have ever been on

boulders and rocks all the way.

Ugh - boot shredding stuff? I heard Foinaven's like that... Still, it's gotta be done! Looking forward to the Sutherland stuff though - not so sure about the Glen Shiel stuff on the second week - not my fave area - wayyyy too steep!

Preceeding every meeting with other walkers shouts of "she'll no bite" were heard in Assynt!

You'll enjoy these two, I hope you get the right weather!

We're doing the glen shiel ridge on the 26th June, REALLY looking forward to it!

I'll certainly be trying to get a look in the caves that's for sure! Still laughing at the dog looming out of the mist at people though!

With the size and weight of those things, they were probably more worried about being pinned down than bitten!

good stuff Sid...
the caves are well worth checking out if you find yourself back up here... the sound and the roar of the water as it disappears deep underground at one point is particularly impressive...

aye, will check them out when I return with the hot dog crew during the next decade! We did see a couple of folk soley checking the caves out. They were looking at us weird and we were doing the same...cave baggers??

Great report sid. I think I should be able to join the South Glen Shiel Ridge..will get in touch.

I bagged my second cave of the year last week

Good to see that the Drumochter folks are still getting out and about. Long before I visited the two tops I was taken down into the caves and passages by some folks from the Speleo group in Edinburgh. Interesting place for a visit with tight squeezes and some wet bits. I believe that the system of passages has been greatly extended since our visit in the '60's.? Didn't get back for the tops until 1973.

Good news Scott, I'll pick you up if you want in town. Gaffr south glen shiel ridge with the hot dog brigade on 26th June?

I'll be back home by then unfortunately - would have been nice to have a group walk!