Weather set fine so caught the 08.21 train from Queen Street to Falls of Cruachan arriving just shy of 11.00 where we met George the Scotsman (to accompany this Englishman and Irishman up the hills). Bright sunshine in the short climb up to the dam. A large dumping of the white stuff leading up to the coll made us suspect it would be quicker to hoof it the more direct route up to the ridge, due north from the reservoir head. Mob at the reservoir Compacted snow on the last ridge to the summit made it a bit of a nervy final few metres to the cairn (especially as I had to go back for my stone to place on top). Enjoyed sunshine and views to Mull and the Nevis range as well as the 3 targets ahead of us which looked a long way indeed. The top Stob Dearg looked very enticing but we had no time for that given our intentions to do all 4 munros. Most enjoyable ridge walk taking in top Drochaid Ghlas and on to beast number 2: Stob Diamh. It was decision time now, the wind was picking up and we had 4 and a half hours until the train. George sensibly decided to head back to Falls and take his car to Oban whereupon he would arrange our refreshments for the evening. The remainder of us decided to go for it, preferring a hard day today than return to do the Dalmally brace tomorrow.
First step was to knock out another top: Sron an Isean. Way down from Sron an Isean

The route down from here to the River Noe was tricky. A bum slide seemed the best option but stopping before the rocks was an issue. It took about an hour to get down due to the steepness and snow and ice. Once on the Lairig Noe it was hard graft up to number 3 Beinn A Chochuill and the forecast winds were really picking up now. Another 50 minutes of slog and we were atop of number 3 but no time to hang about - our train was at Garelochead and heading our way! Choichuill to Beinn Eunaich would be easy enough if it weren't for the now worrying wind which was threatening to carry us away. I wasn't overly worried given there is little exposure on this section but wouldn't have fancied it much crossing the Cruachan ridge in winds this strong. Eunaich summit was topped with a celebratory swig of Talisker but no time to hang about, train now leaving Ardlui! 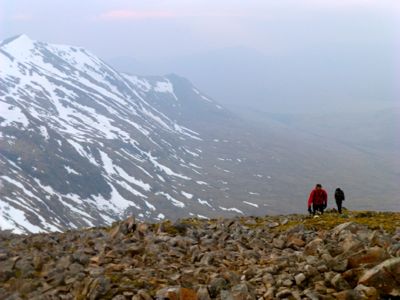 It was easy going down the gentle slopes towards Castle Farm although we had to get a jog on once we hit the farm track. Views back towards Cruachan impressive. Jogged along A85 to Loch Awe where we made train with 7 minutes to spare. George had the gaff ready and his reckie deemed that Wetherspoons was the venue for the evening mainly due to it being the only place still serving scran at 22.00.

Nice report. Planning these 4 this coming saturday but going the other way round starting from Castles Farm.

Which way do you recommend and is going up Sron an Isean form Lairig Noe without crampons going to be a challenge?

We didn't have crampons and I'd rather go up it than down it. It's pretty steep. When you are on top of Beinn A Chochuill aim for the brown patch of river in the Lairig Noe, this is the highest point of the pass. Head straight up the other side from there but avoid the river which is hard to cross, stay to the left of it in the direction you are going. Best of luck!

Thank you for that. I will go the route as intended from Castles Farm.