White out on Beinn Bhethir

White out on Beinn Bhethir


The weather was quite apparent while we we were trying to kip in our Oban hostel, it was actually trying to get into our window! An early MWIS check was not promising: more chance of a lightening strike than a cloud free munro. We clung to the hope it would clear up later, it's a long way from Woking to the West Highlands and I didn't fancy another rest (drinking) day. We decided to drive up towards Fort Bill and see how the day panned out. The sun came out as we approached Ballachuish so given the strong winds were emerging from the SW, the northerly approach to Beinn A' Bheithir was given approval by the committee having been almost blown off Beinn Eunaich on Friday.
The rain we'd endured on Mull yesterday had obviously fallen as snow here as we emerged from the forest to find a beautiful panarama of thick fresh snow ahead of us. The route ahead from forest It was tricky going with no path to follow and just one pole between us. Anything is better than rain though and we trudged through the snow towards the coll which separates Mr. Dhonuill and his ginger haired brother, Mr. Dhearg. There is a steep bit before the coll where we were on all fours just trying to get a grip, it was quite often, one foot up, two down! Struggle up to the coll

Made the coll in around 2 hours and the sun even came out, so far so good. The views from the south side of the coll were amazing: Bidean nam Bian in all its scary finery, Beinn Fhionnlaidh shining white and away over to Starav and Lismore and Mull glistening across a clear blue sea. So much for the weather forecast of heavy rain and high winds! Turn right for Sgorr Dunhuill and a thick black cloud tracked us as we climbed up this beauty with a tasty little scramble at the end. Got one photo in before the predictable white out which lasted around 20 minutes during which time we huddled like penguins on the small summit. 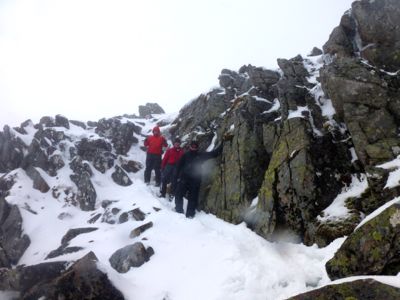 When the cloud passed we hot footed it down to the coll and the sun came out again making for a pleasant stroll up the much more sedate Sgorr Dhearg. Lunch in glorious and wind free sunshine overlooking Glencoe. There are two routes down from here, we chose the one via Beinn Bhan (to bag another top). This was a scenic route with excellent views of Bidean nam Bian all the way and the final destination Ballachuish village. The final 45 minutes is a bit of a drag though, crossing a bog towards the school in the village. 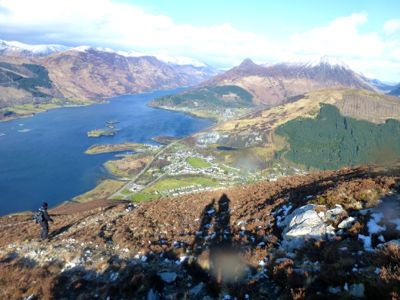 The only moment of joy during this stick boot moment was a lamb who thought I was his mother! Great walk - defying the weatherman is always a winner.

Beautiful. Lovely images of what I think is an underrated couple of hills.

Had one of only two true whiteouts on Beinn Bhethir, between Sgorr Bhan and Sgorr Dhearg, after climbing the NE ridge of the former. Proper step-counting and bearing job. The hardest part was leaving the summit on a bearing when the only thing we could see that wasn't white was the trig point, hoping we hit the ridge. Real trust in your navigation that! Seem to remember it was windy enough to blow our ice axes out horizontally on their leashes too...

Well done, that was a great walk in those weather conditions. I remember the scramble to the top in fine weather - it was where I learnt my canine companions do that stuff better than me

I was up Beinn a Bheithir last Friday. Sunny and warm ( almost ) the whole way. With wee patches of snow below the bealach. Light fleece sufficed me.