Another blast from the past. Not sure why I picked this one out to write up, but I really enjoyed it. Probably that feeling of making it up as you go along again - seems to work particuarly well in the Cairngorms.

With my wife away on the train, I had a day with the car available to go wherever I wanted. In the event, I made a rather late start, so didn't want to drive too far. I realised that despite the closeness of Rothiemurchus, I 'd never been right into Loch Eanich, so decided it was time to visit. I loaded the the bike onto the car and drove down to Coylumbridge.

The cycle up Gleann Eanaich is quite tough. The lower section around Whitwell isn't too bad, but on leaving the forest, there is quite a steep haul. After this the track gets quite rough for cycling, and there are a couple of fords. Still the surroundings are spectacular and you gradually move into one the remoter, less visited parts of the northern Cairngorms.

Loch Eanaich is actally the water supply for Aviemore and quite a lot of this part of Speyside, but the current infrastructure is struggling with the demands of new developments in the area. A friend of mine had once spent a rather bizarre day up here with one of the water board operators, while he used his fishing rod to try to catch an eel which had got into the intake chamber and grown too large to get out! 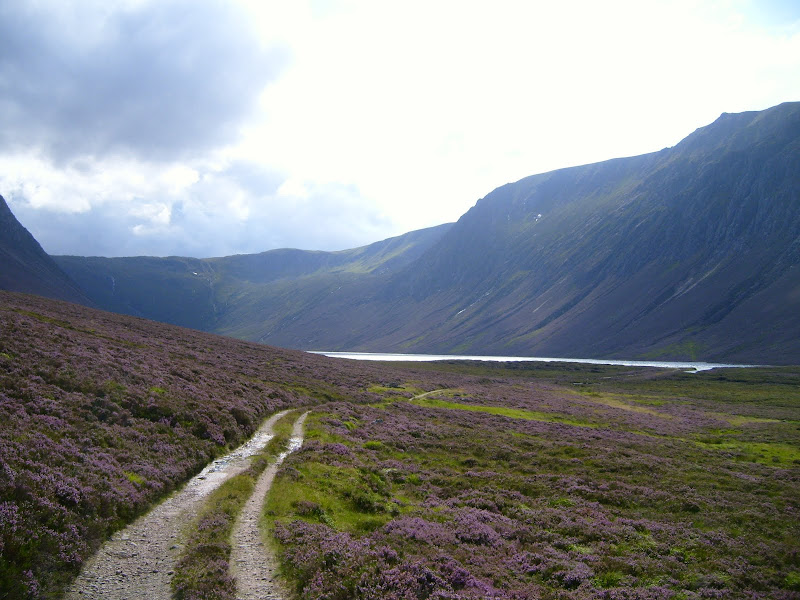 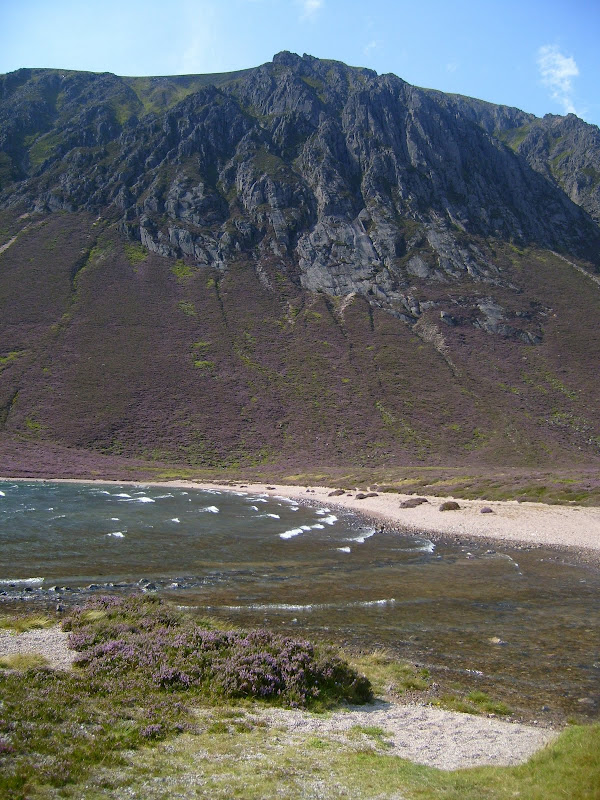 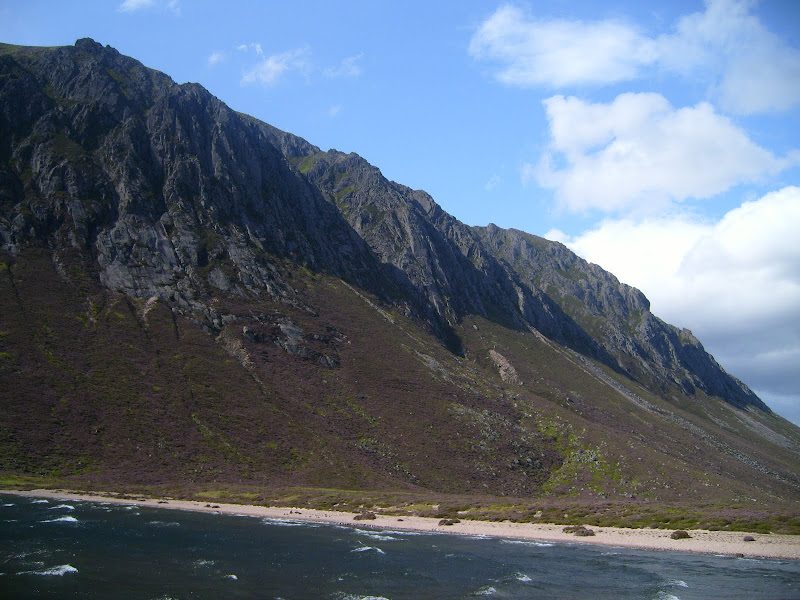 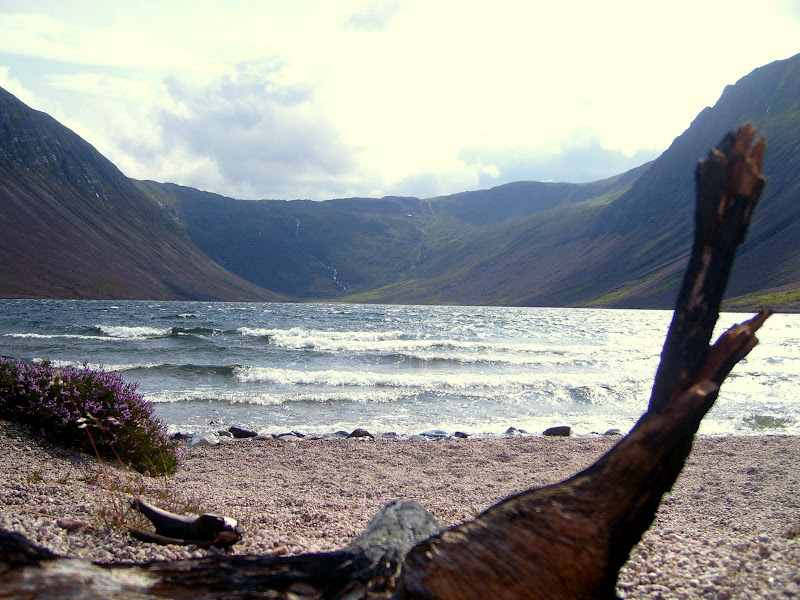 So, I was at Loch Eanaich and it was a pretty impressive spot. I hadn't really got much of a plan for the day, but knew I would be tempted up onto the plateau at some point. I remembered doing a fairly standard round of Mullach Clach a Bhlair and Sgor Gaoith in 2004 while staying in Feshiebridge. A cople of the guys I was with went back the next day to try and find a route up from Loch Eanaich, and had a great day. Inspired by that, I thought I'd do a bit of exploration in that direction myself. I picked up the path along the western shore for a short distance, then struck up through the heather to reach the rocks of No. 3 Buttress. Quite low down, I ended up stuck on some rather unpleasant loose rock and heather, so I retreated a short way and headed leftwards to the edge of the crag. I was able to pick a line onto the arete bounding the left hand side of the crag. This actually provided a fairly easy way up. It was definitely steep, but it was really just walking. Bit of a shame as I'd hoped for a scramble, but it seemed that the choice was between walking or climbing.

Loch Eanich from halfway up No. 3 Buttress: 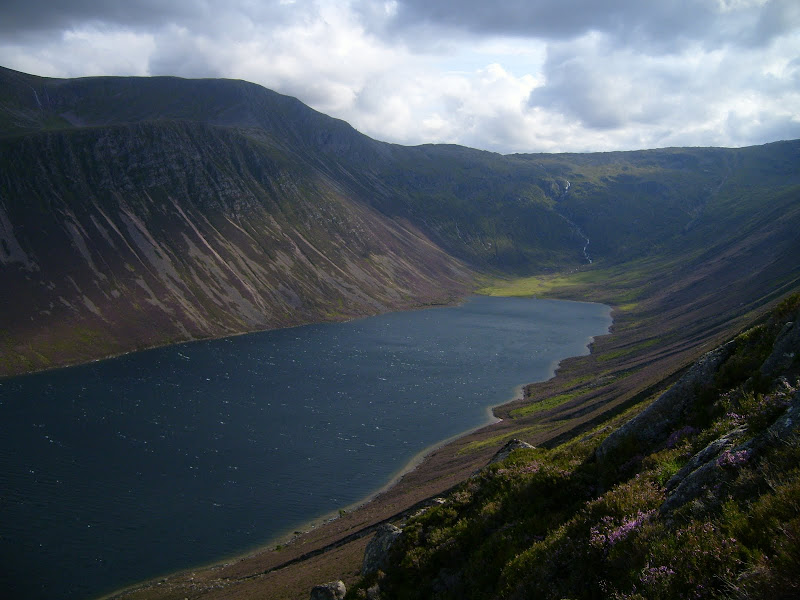 Loch Eanich from the top of No. 3 Buttress: 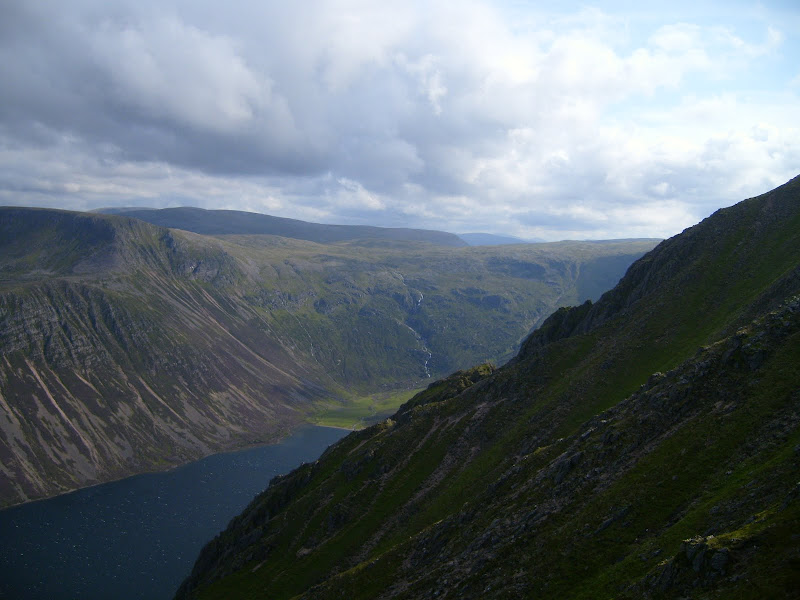 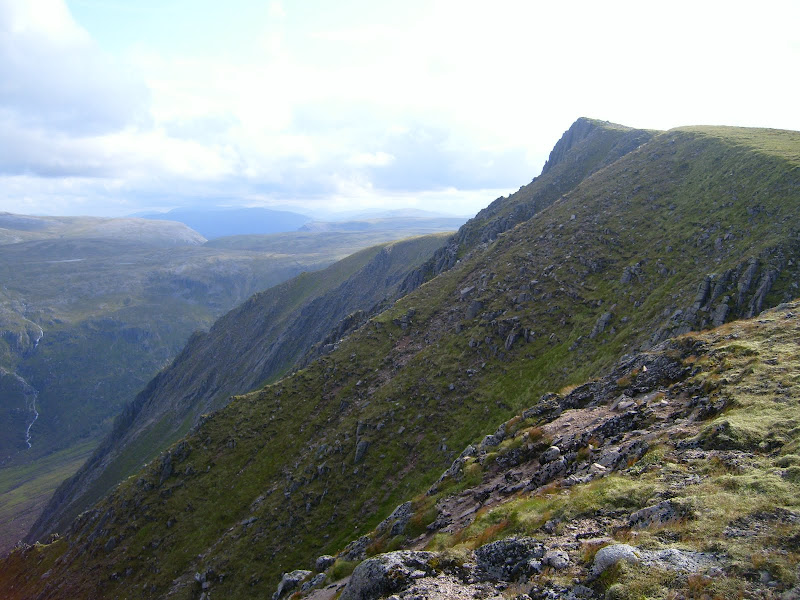 Back down to Loch Eanich: 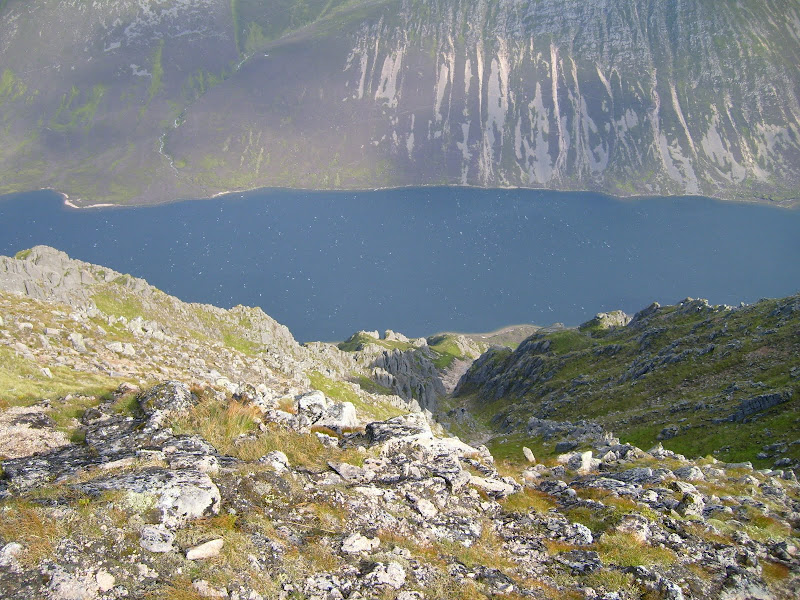 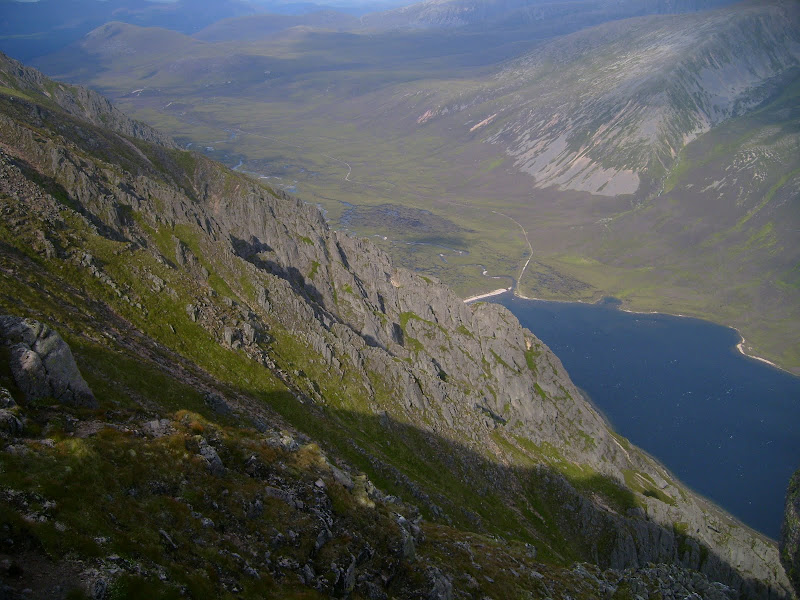 Back to Sgoran Dubh Mor: 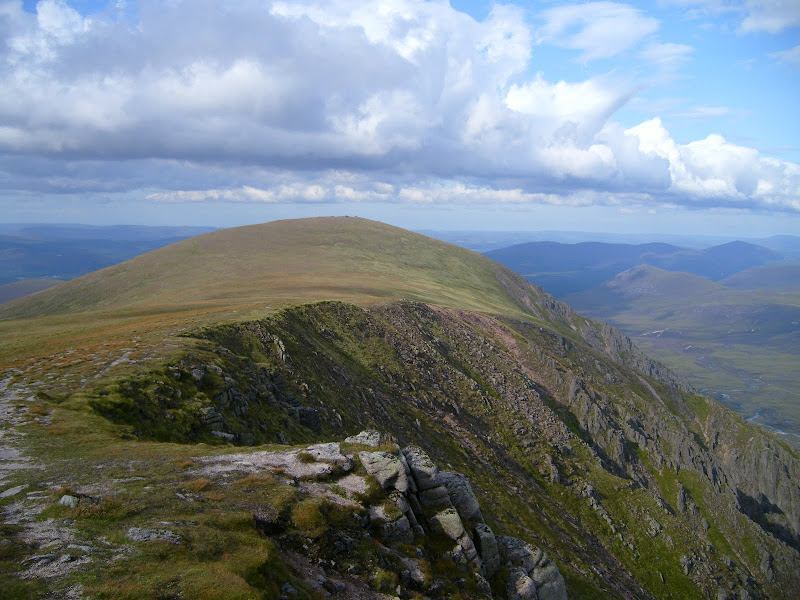 I finally hit the plateau close to the summit of Sgoran Dubh Mor, but didn't bother visiting for some reason. Instead, I headed straight for Sgor Gaoith. The crags hereabouts are really impressive as they drop down to Loch Eanaich, so I stuck close to the edge for the best views. In retrospect, I think the other guys who did this route took a line more directly under the summit of Sgor Gaoith, so not quite the same as my route.

What a great summit - such a contrast between the rolling grass of the plateau and the drop down to Loch Eanaich. One of my (many) favourite spots in the Cairngorms. I hadn't really decided where to go next, but though that a stroll in the direction of Braeriach was in order. Initially I fancied exploring the headwall of Gleann Eanaich, and maybe dropping down next to the waterfalls which cascade down to the loch, but I changed my mind and decided to head for the Munro top of Tom Dubh, remembering Irvine Butterfield's description: 'the most pointless, distant top in the Cairngorms'. I think he was being disparaging, but for some reason his description has always inspired me to visit one day. 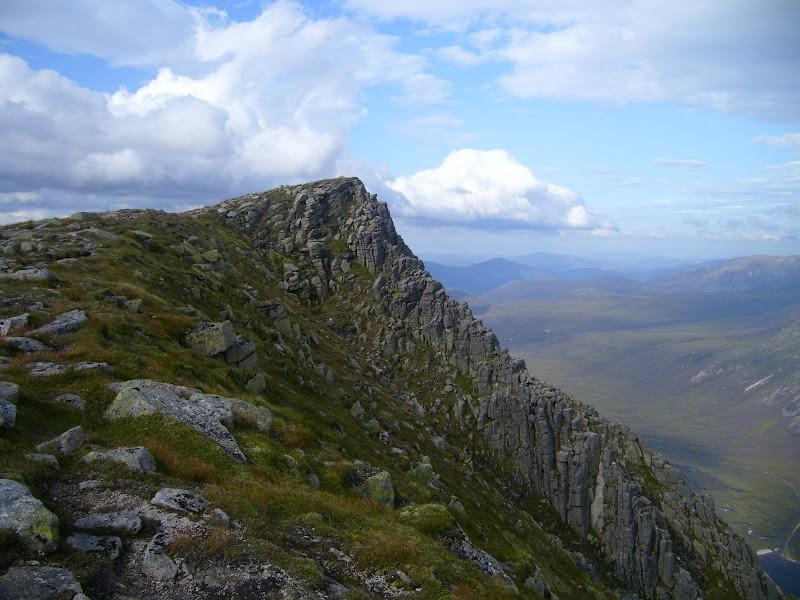 Further south, the views over the eastern cliffs of Sgor Gaoith expand: 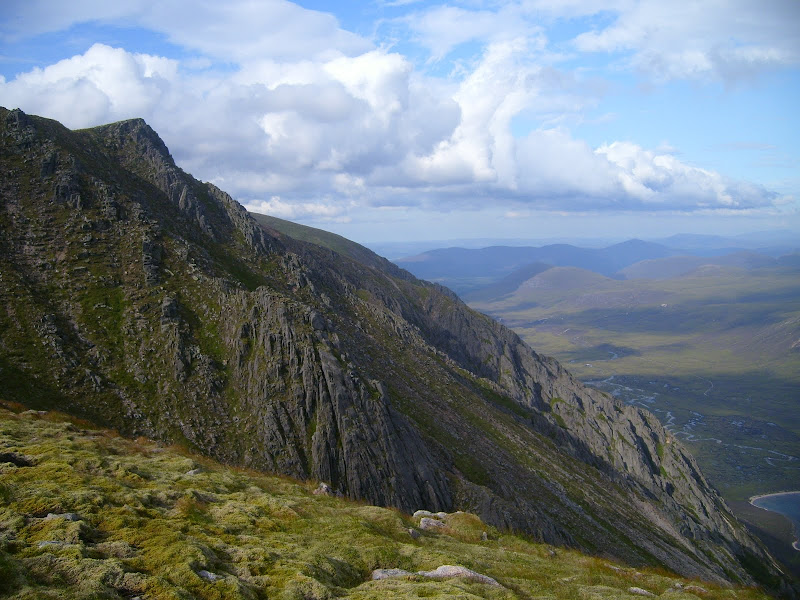 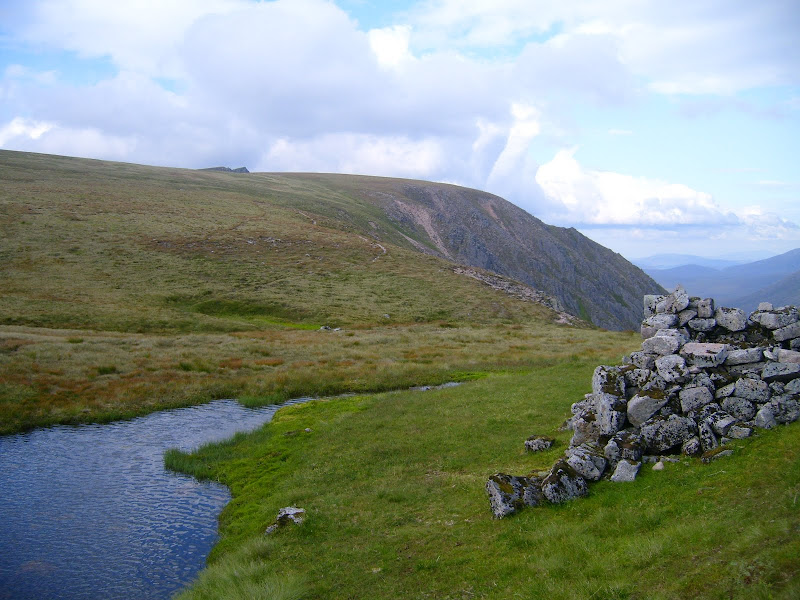 The first part of the walk was really easy underfoot. I passed the small pool of Fuaran Diotach (the breakfast well - some great info about the history of these old bothies in this article), where there are the remains of one of the highest bothies in the Cairngorms. As the cliffs petered out, I veered towards Lochan nan Cnapan. This part was a bit rougher, and there was no path, but it was still quite reasonable underfoot. In fact on the final approach to Tom Dubh, there is actually a faint 4x4 track. Not an area to be wandering aimlessly in the mist this, as you are miles from anywhere. I was fine though, as I had some lovely late afternoon/evening light. I rather enjoyed the solitude of this smmit, despite the lack of features. One of the strangest things is the Allt Luineag. At almost 900m, this is already a fairly large river. With the even higher hills of Cairn Toul rising behind it, you really don't feel the 918m that this summit is at.

Sgor an Lochan Uaine and Cairn Toul across the Moine Mhor: 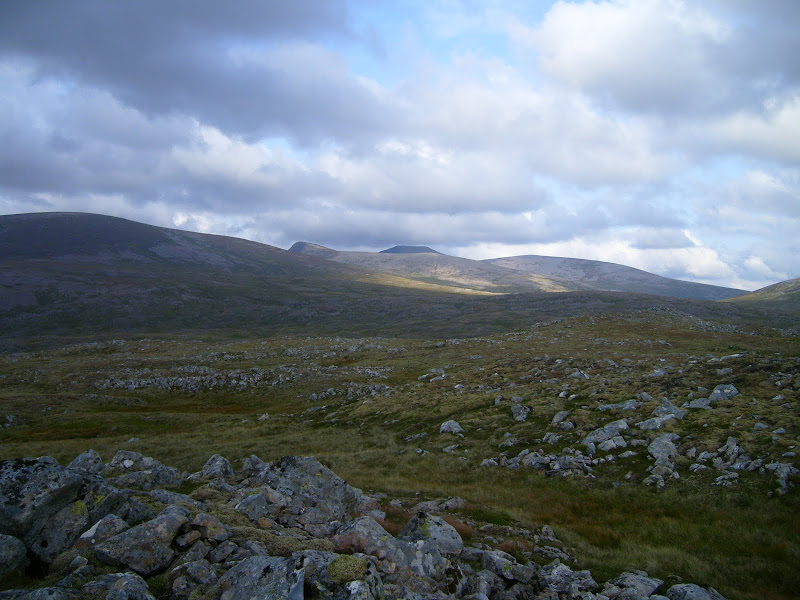 Braeriach and the Allt Luineag: 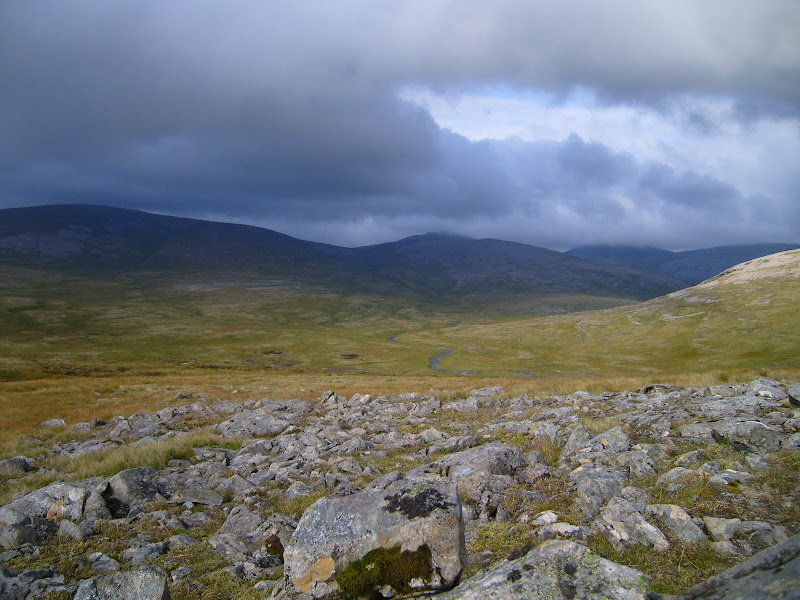 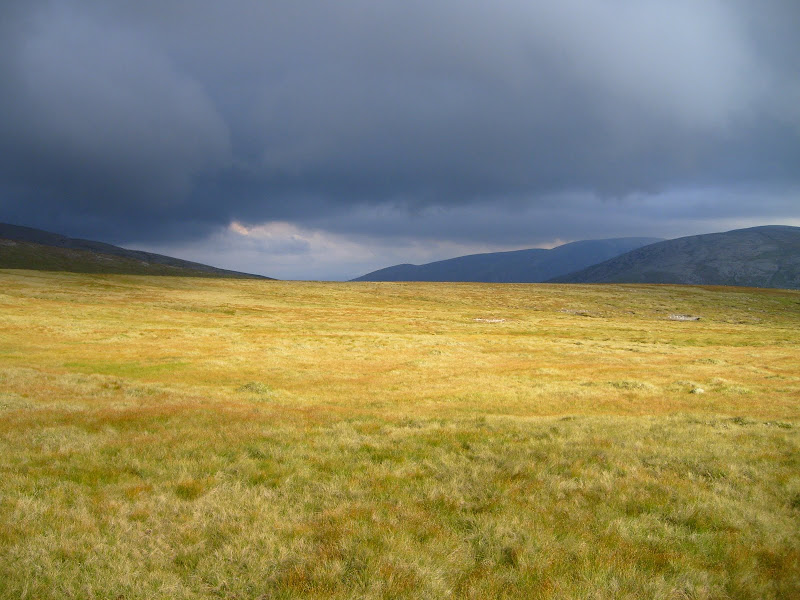 From here I headed towards Carn na Criche, the SW shoulder of Braeriach. Time was ticking on though, so I opted for a return to the bike. The evening light made the grass appear golden - I love the high plateaus of the Cairngorms and the Mounth. I climbed towards Braeriach briefly then picked up good path down Coire Dhondial. This passed some waterfalls higher up, and remained really good until the final half Km, where it disappeared into thick heather. However it did point me directly to the part of the track where I had left the bike. A couple of spots of rain confirmed that I'd made the best decision, and I set about the long cycle back to the car. While the downhill bits were welcome, a lot of the route is flat, so you don't get back out a great deal faster than you get in. 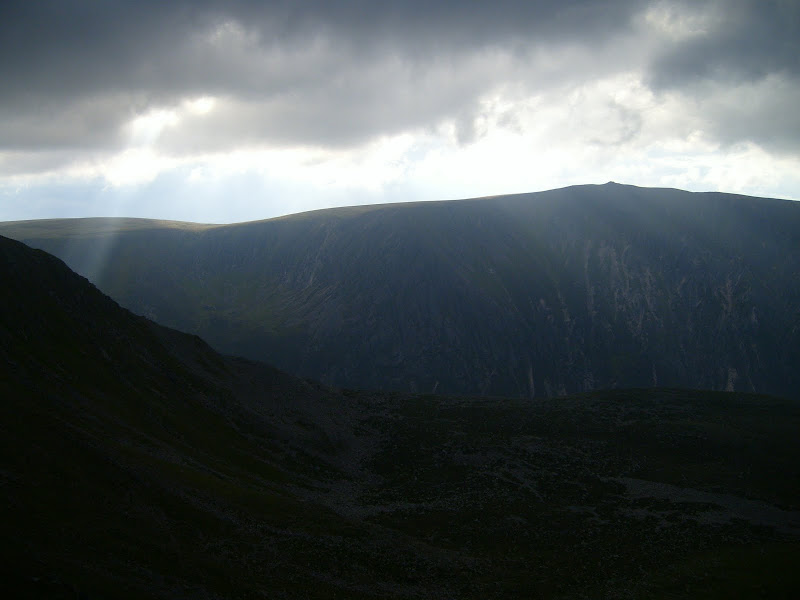 The path returns to the track in Gleann Eanaich: 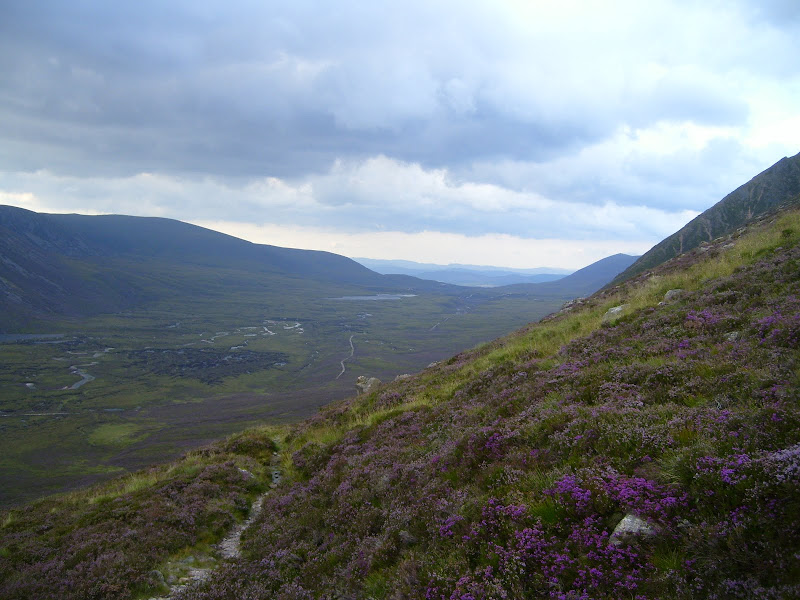 Hmmm - that was a brave looking line up to the plateau! I wanted to do Loch Einich on the way back from Braeriach but the weather was so awful, we just went back the same way in the end

Excellent description and pictures, I've always wanted to get up there but never got round to it. You really captured the wide open spirit of the high Cairngorm plateau. As for Irvine Butterfield's desparaging description, I met the man and found him appallingly opinionated and basically full of crap. I wouldn't pay much attention to his opinion.

Users browsing this forum: Alan B and 49 guests