Clachan Yell And The Adder

Clachan Yell And The Adder


With the weather set to be lovely today, we decided to head out in to the furthest depths of the Glen Tanar estate. We devised a route that would take us up around the back of Clachan Yell and bring us back via the Mouth Keen path.

We arrived at Glen Tanar and set off at 9:45am. When we left home at 9am, it was only 1C, but as soon as we had started walking, the sun was making itself known and the temperature started going up quite quickly. We passed by St Lesmo's Church and set off along the lower path towards Knockie Viewpoint. We carried on along this path until we reached the bridge that starts the return journey of the Pinewoods walk. After a short while, a path appears on the left hand side and we took this and started climbing up quite gently towards Clachan Yell. There is a small ford to navigate past once it flattens out, before the path climbs quite steeply for a short distance. 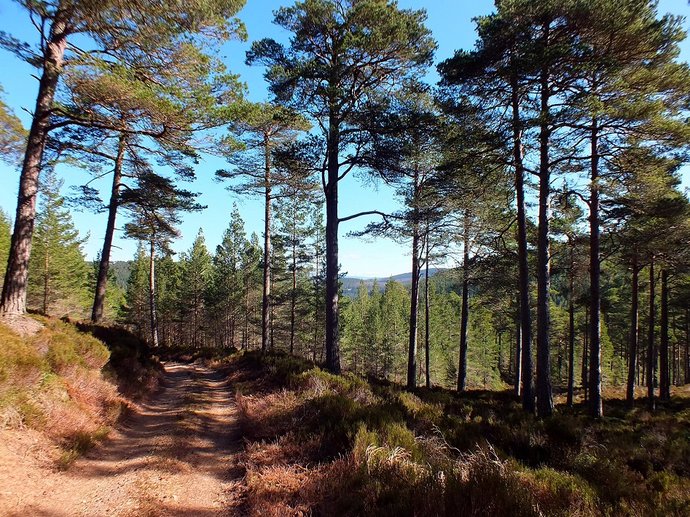 The path eventually flattens out as it heads through a forest. There is a large gate that we passed through and the path descends a bit before we came out of the trees and hit the moorlands at the edge of Clachan Yell. The sun was beating down on us still, but a breeze was cooling us nicely. We caught out first glimpse of Clachan Yell and discussed whether or not we should climb it, but as this walk was 23km long already, we decided against it and followed the path as it wound its way along the back of the hills. The view down the glen was stunning. There are hardly any trees in the moorlands, but the ones that are standing contrast so well with the brown land. The path curves its way around the back of the next three hills and as we climbed a short, steep section, we came across a small cairn that had some large stones near it which made a perfect spot to sit for lunch. The views from here were stunning. After a short rest, we set off again as the path made its way up and down behind the hills. As we came over the top of the crest, we were greated by Lochnagar in all her beauty. We reached a fork in the path and took the path that leads to the right and started to head downhill in to the glen to rejoin the path that goes between Glen Tanar Visitor Centre and Mount Keen. You can never tire of the views up in the hills... As we made our way down towards a small river, we turned to look back at the path we had just descended. As Rick turned around and started walking again there was a hissing sound and Rick launched himself in to the air in a panic. Neither of us had noticed the Adder sunning itself on the side of the path and Rick was unlucky enough to tread on the tip of its tail. The Adder, still hissing, started wiggling towards the heather and Kamila watched it to make sure it wasn't injured, which it wasn't, then checked on Rick. Fortunately, the Adder only hissed and didn't manage to bite Rick, but it was a big scare for us both.

We carried on towards the river and had to make our way across it. Kamila opted for the shoes and socks off approach and walked right through the middle of the water, Rick hoped across the stones and apart from one foot landing in the water, made it across dry. The water was about 1-1.5 feet deep. We joined the main path and set off at a relaxed pace along it. We knew it would be flat, so just enjoyed the sunshine and the colours all around, whilst keeping an eye out for anymore Adders. This part of the walk was long, but there was plenty of wildlife along the way to look at. We saw Mallards, song birds, a deer, a lizard and a buzzard. After what seemed like an age, we reached the Halfway Hut and stopped for a drink. Out feet started to become a bit sore now. This was one of the longest walks we had ever done. We knew once we reached the next bridge on the right that we were about an hour from the car park, but it took ages for us to finally reach it. We wandered along through the trees, our pace slowing until we reached the Trout Loch. We rejoined the original path that we started on and 6.5 hours after we set off, we were back at the car park. What a great (and eventful) day out we had.