If you fancy something a little extra in your day out on the hill why not cross Scotrail Suzie's palm with the appropriate amount of silver, grab the West Highland line train, take yourself off to Corrour, and treat yourself to a Beinn na Lap dance? 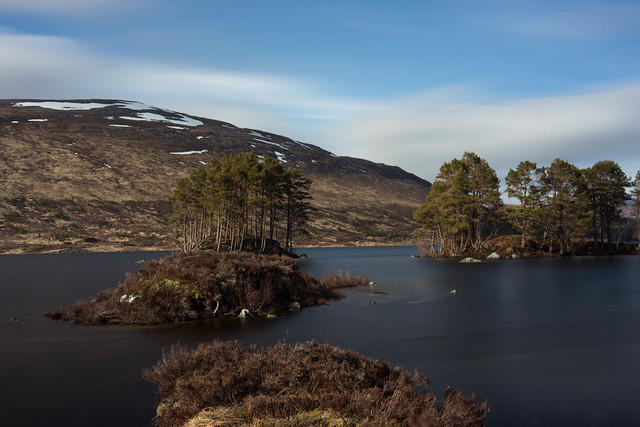 As I was staying near Crianlarich this seemed like a good idea for my third day of grabbing single Munros, and the train trip gave it a certain added je ne sais quoi (remember your auld alliance now...). 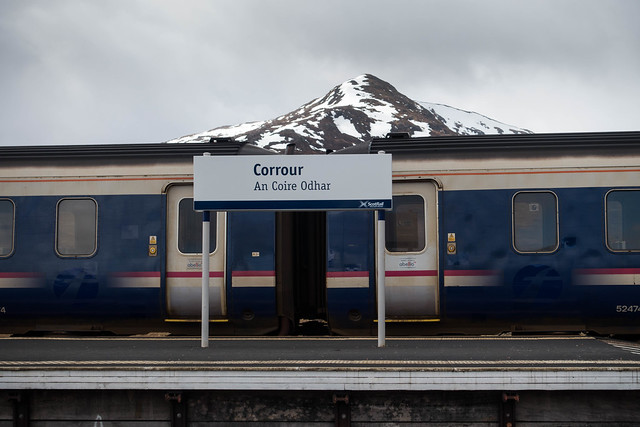 After a beautiful one hour ride from Crianlarich station, getting off at Corrour was like being dropped into some sort of riotous arena of mountains, moor and water. And at about 400m above sea level I had the added bonus of the easier climbs to a summit. 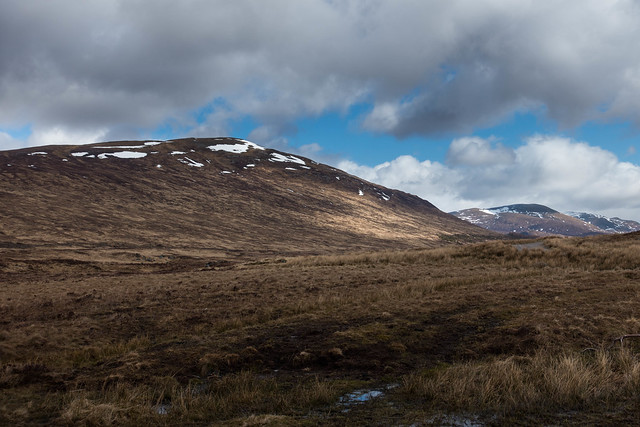 It did not have quite as remote a feel as it may usually have, as there are works going on at the station and over on the estate where enormous pipes are being laid for some hydroelectric schemes. Nevertheless, once off the track down to Loch Ossian and onto the hill, I was quite alone.

The path goes straight up the hillside to the summit ridge and is initially boggy, muddy, indistinct, and seemingly consisting of dead hippies.... 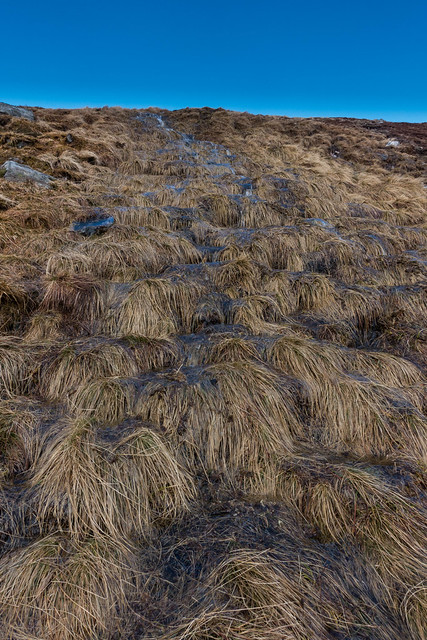 Once on the wide summit ridge, an occasional and unnecessary path leads easily up to the top. It was a real delight, pleasant walking with astounding views all round. What made life more interesting was the fact that I was on the edge of the weather: dry where I was, but with a bitter wind, I was able to enjoy plenty of rain showers passing over the Corbett Leum Uilleam to the south west and over Rannoch Moor: 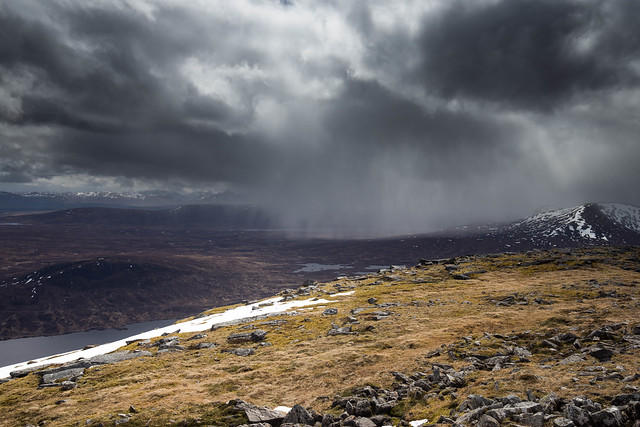 The summit itself is on a long wide ridge, with several well made stone shelters, and wonderful views all round.
Summit shelter: 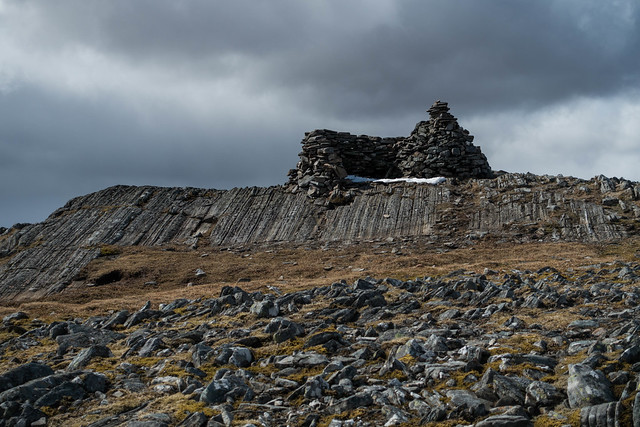 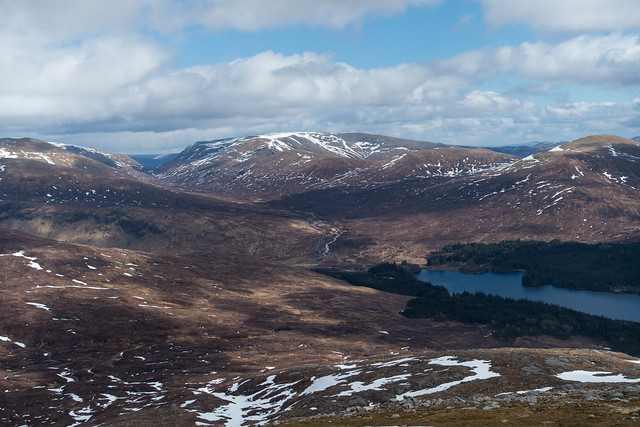 Bidean and Anoach Eagach (I think...): 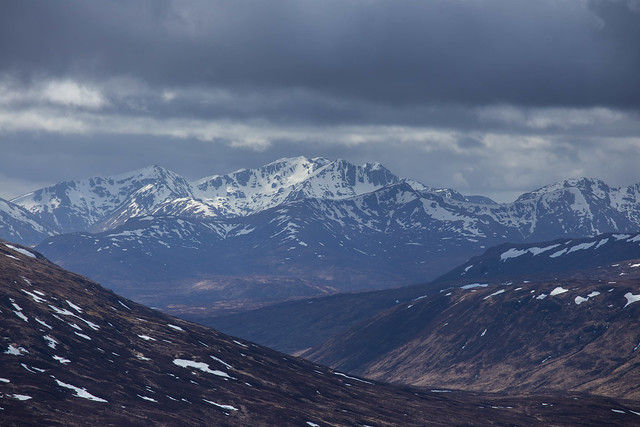 Munros around Loch Treig or somewhere in that direction: 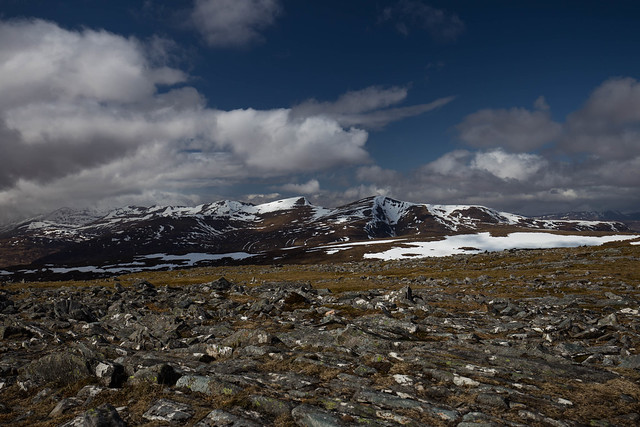 The summit ridge looking back to Leum Uilleam: 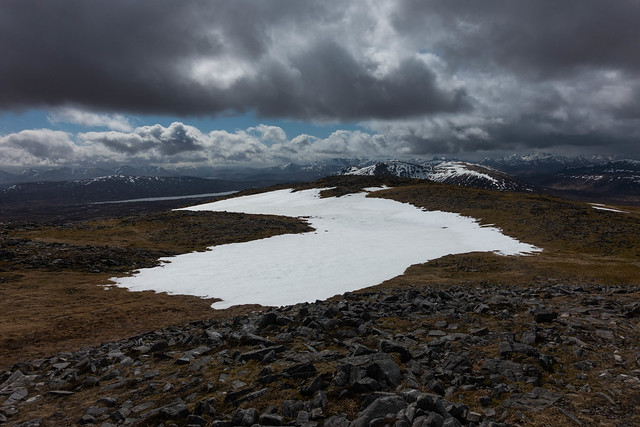 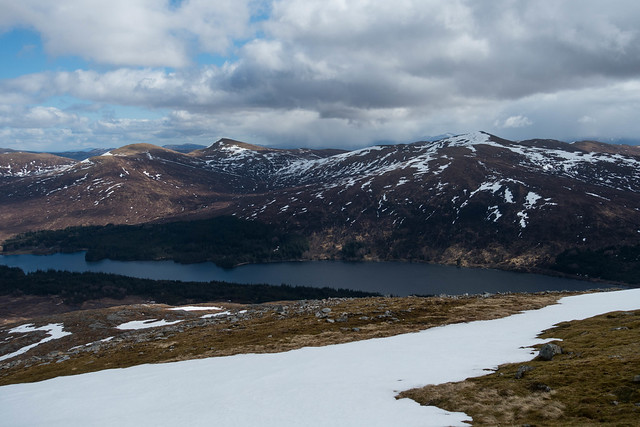 Panorama to the west:

After lingering a while and taking advantage of the stone shelters to get out of the northerly wind, I got down off the hill the same way I came, with the balletic addition of a wipe out on the wet mud.
I had a couple of hours to play with before the train back, so spent those down by the loch trying to be a proper photographer: 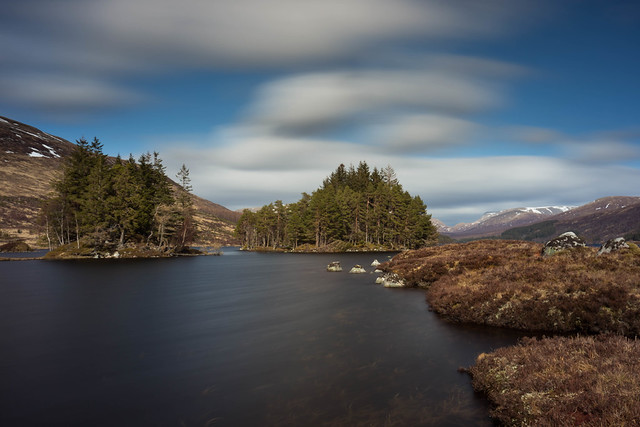 The hostel at Ossian, what a setting! 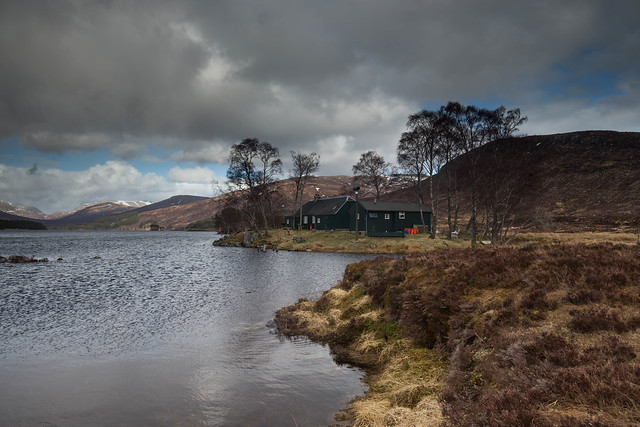 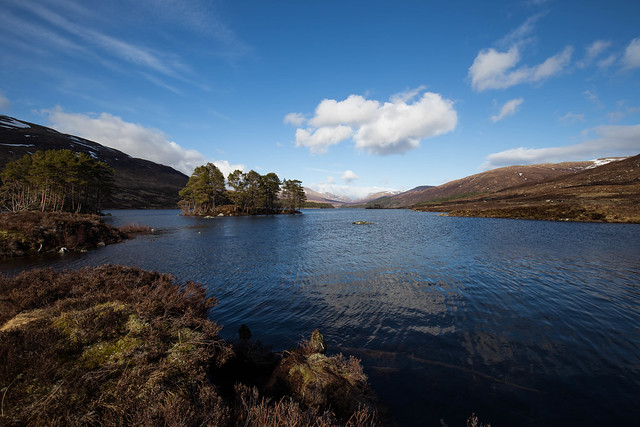 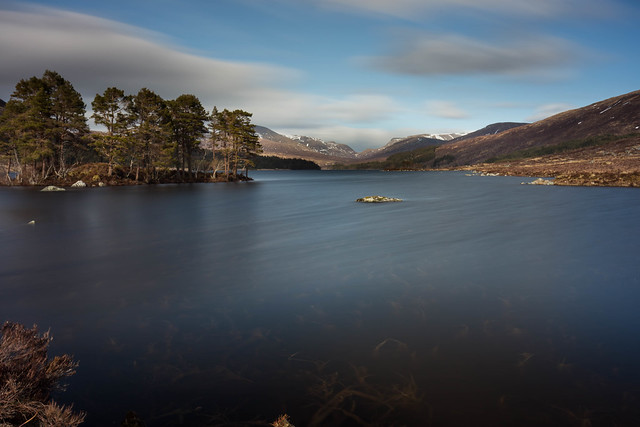 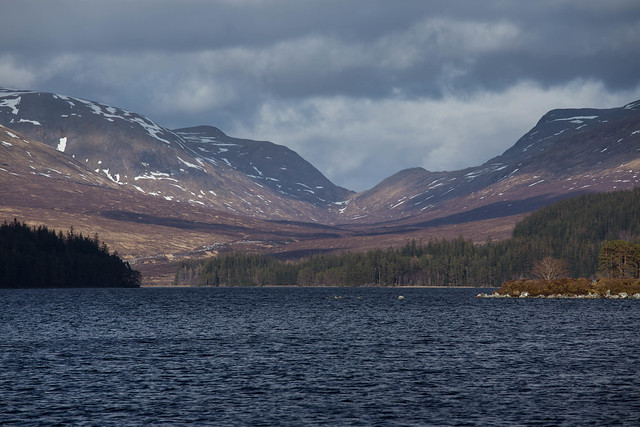 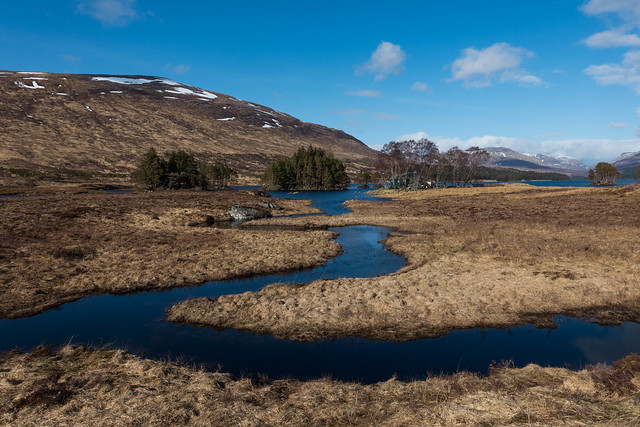 Finally it was time to head off for the station to catch the 18:20 train back, the views didn't give up though. Grey Corries range, and can someone tell me if that's Ben Nevis on the left? 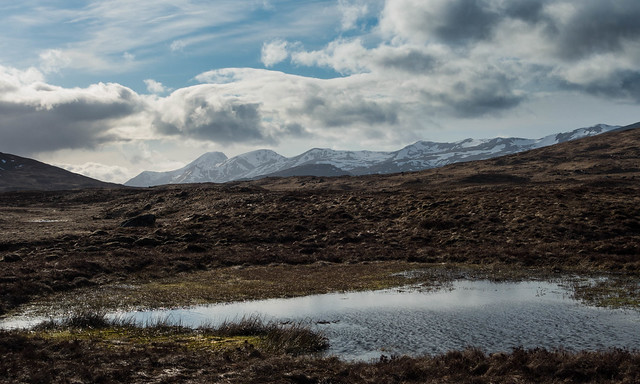 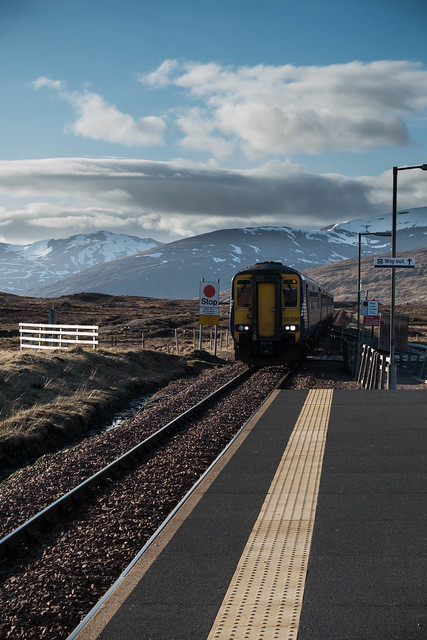 But not without more entertainment through the train window... 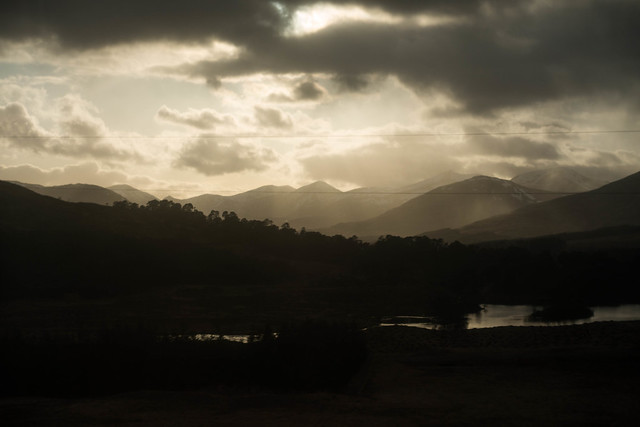 So, maybe not much of a full-on climb for the finely honed athletes amongst us, but stick a "Kiss me quick" hat on and add in a fish and chip stall, and you'd have what folk in my part of the world call "A Grand Day Out".
Let the train take the strain