There are only three hills known with the english name Ben More in Scotland - according to the MCS Munro's book. Which is odd as I'd have expected more. The only reason I mention it is following on today's trip I've decided to climb them all this year - even if that means a trip to Sutherland!

Anyhow to the important matters now...

None of my climbing pals either wanted to or could go on this walk so it was going to be a solo and rather than end up talking to the grass, I brought Sparky who has about 6 or 7 munros to his name. As a matter of interest but not importance, I was following the WH route. We started later than I wanted to not arriving at the verge by the wooden sign till about 8.10 but I was booted up and away by 8.25 - Sparky suitably on his lead at least until I could be sure there were no sheep after the "gate". Up and over the stile and onto the farm track and uphill we went. I had dressed for cool but not cold and so unlike the first two walkers I saw, didn't need to layer down in the first two minutes of the walk. The gate exists but its a ramshackle affair which has no sheep stopping powers whatsoever and so Sparky stayed on his lead much to his disappointment until pretty much the bottom of the Corrie's rim. You've no idea how much slower it is walking with a dog on a lead steeply uphill through mud. A long way up to the pointy bit A zoomed pic towards Crianlarich and Ben Lui Unzoomed and seeming very far away The sun at last appearing over the top of Ben More

The path came and went, but once we reached the drystane dyke it pretty much came and stayed all the way then for the rest of the day although it had its moments. I don't know what I expected of this wall - I suppose I was looking for a 2-3ft high construction of beautifully laid stones. I only realised we had reached it when I happened to notice that the heaps of stones we had sat down near to had some kind of longitudinal pattern to them. It did make me wonder how old it was and then if it was THAT old, how did they carry all those huge boulders all the way up here way back then and why? Was it to stop sheep falling into the Corrie? I doubt it. The mystery remains unresolved.

A bit of more interesting rockiness was next and then just as you thought the top had been reached then came a long uphill traverse across the mountain to the real top. Much cooler but no wind to speak of and views to die for. I quickly put on my outer layer and sat down to first lunch of the day at a shade after 11.30.

I met two chaps there one of whom had done over 600 munros and who kindly took my photograph and promised to email it to me when I told him my camera battery had run out. Which they did and here it is: thanks guys. The trip down from Ben More has an interesting section fairly quickly after leaving the top involving a wee bit of a scramble the second of which I detoured round across the top of a snow field. Its an easy path down to the bealach 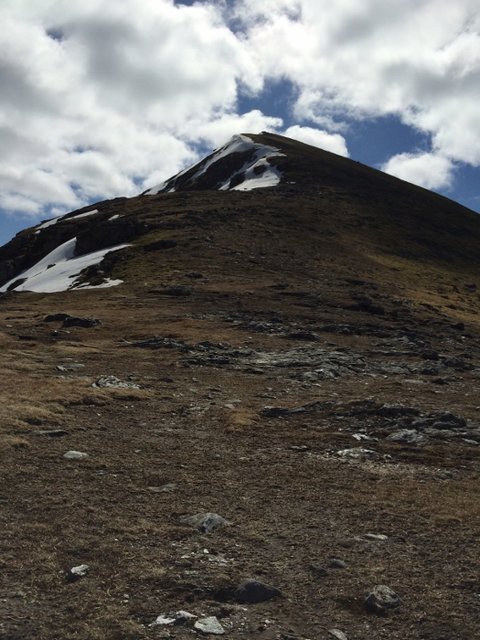 Stob Binnein from the bealach

and after a short stop there we headed up the relatively short stretch up to the top of Stob Binnein. Some more sheep were spotted unfortunately so Sparky had been back on his lead from about 2/3 the way down from Ben More but once up past the first "lump", the lead was off and so was Sparky. Delighted no doubt to be able to explore again including licking the odd bit of snow. With some determination, we reached the top in about 30-40 minutes. Second lunch was spectacular looking round the whole panorama and spotting the munros and areas. The chap who was sitting next to me giving a running commentary! I really didn't want to leave there: sitting on the grass in the bright warm sun. Sparky was in his element - with a constant (and renewing) supply of people to mooch from. He was largely unsuccessful but did score a couple of times and then came back to lie down next to me. It was a fine day

We soon headed off downhill at about 13.40 arriving at the bealach at about 14.20 and pretty quickly set off past the giant boulder and followed streams and downtrodden grass till we (it seemed by accident) found the proper path by the burn. It felt hard going - perhaps because my knee was just returning from injury; perhaps because Sparky was back on the lead (sheep and lambs this time); perhaps, as this was my first two munros since last August, and I felt tired. Anyway we stopped regularly and again just stretched out on the grass by the burn soaking in the sun and listening to the constant gurgling of the water racing downhill. It was one of those good days when time became irrelevant. We didn't get to the farm track till about 15.50 which felt a long time to cover a fairly short distance but soon we were heading back to the car and arrived at about quarter to 5. A bit longer than I had expected but a great day was had. Sparky collapsed into the back seat and was asleep before I had got myself changed and wakened only to have an ice-cream cone in Callender. He deserved it (as did I). I think this is from Stob Binnein looking East-ish