Didn't expect to see Ben Hope and the Cairngorms!

Didn't expect to see Ben Hope and the Cairngorms!


I was about to post this report last night when something happened the result being I lost the part of the text I'd not saved and all the photos were jumbled and not in the positions I'd put them. Today I deleted all the photos and started again. This has only happened to me once before - not sure why - and I'm wondering if anyone else was similarly affected?

Now for the report - take two.

It was one of those serendipity days that nearly didn't happen. Forecast said Saturday would be fabulous, Friday good and Thursday average but the only day Moira could go was the Thursday (before heading off for a holiday in the south of France, poor thing). On the Tuesday I had badly stubbed my big toe leaving it bruised and painful so if she had decided she wasn't bothered about going I'd have been okay with that. But she was quite keen to go and I reckoned that once in my boots my toe would probably cope and if it didn't I would deal with that when I came to it. I should add Moira wasn't fully aware of the toe situation when we made the decision to go and in no way coerced me into doing something against my better judgement.

Carn Chuinneag had been on the radar since I read the WH description of it. We had originally intended doing it with Marion (then living in Ardgay) but the right opportunity never came and she's now living in Bishkek. But I did think about her lots as we stopped to use the facilities in Ardgay and drove up the winding minor road heading west.

BBC Weather had predicted dark cloud with possibility of showers and no sun for just about everywhere so Carn Chuinneag seemed as good a hill as any, but to be honest I wasn't expecting too much. It would just be nice to be out for a dander in part of the Highlands I'd never been to.

The parking area is on the right side of the road slightly beyond the entrance to Glencalvie Lodge and there was one car parked already. We never saw the occupant of said car but the boot prints we followed higher up may have been his or hers. I usually think of primroses as a May flower so it was a cheerful sign of early summer to see these clumps nestling on the bank beside the gorse. We crossed the cattlegrid (first of several) and then the bridge over the River Calvie, with a view to some structural work on the bank up river which I tried unsuccessfully to obscure in the photo. When I was a kid my pal had a tree house in which we liked to sit to put the world to rights - but this tree house is something else! 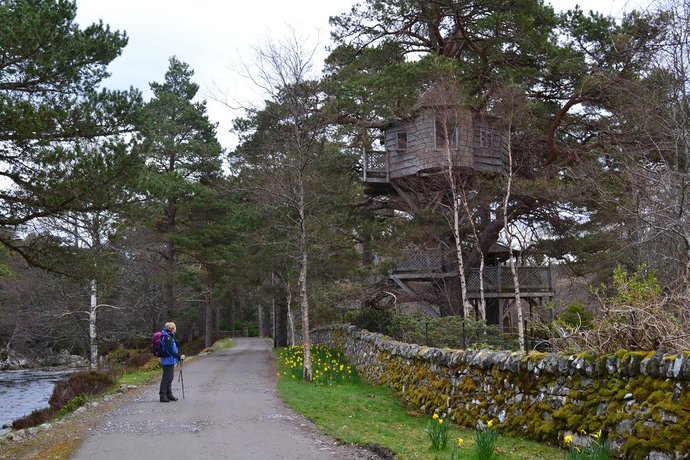 We walked through the gate with lions standing proud on either gatepost, admired the landscaped gardens with pond, waterfall and shrubs and passed the big house on the right. Somewhere about there a gentleman appeared and after the initial greeting asked if we were going to Diebidale. We said we were going up Carn Chuinneag and was that okay and he said yes of course it was and helpfully told us which way to go to get on to the track up the glen. What a pleasant gently spoken man, with something of the landed gentry about him. We saw him later being driven in a 4 by 4 up to the prominent building on the hill at the end of the glen and he gave us a friendly wave as he passed.

It reminded me of Huff n Puff's experience last September when a stalking party gave them a lift so their scent wouldn't move the deer on from where they knew them to be. It shows how with a bit of consideration the managing of deer estates and freedom of walkers can work amicably side by side. If only all estate folk treated walkers like that. After the fenced plantation of birch trees we reached a junction where we turned left and almost immediately right on to a stalker's path which zig-zagged its way up the west side of Coire na Ciche. This was an excellent path which was mainly dry underfoot and made its way up at a very pleasant gradient. I was particularly grateful for it on the descent when my toe was starting to complain.

Looking back down Glen Calvie from start of stalker's path The path led us up the shoulder of A'Chioch from where we had a great view of the way we had walked in along Glen Calvie. Good spot for a sit down 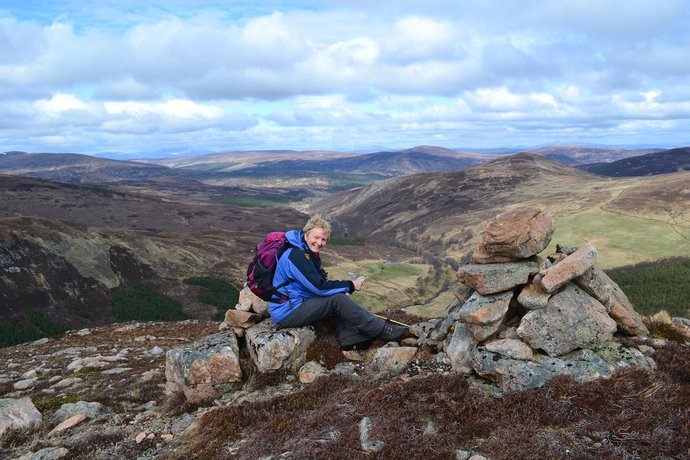 It was at this point we started to pick out familiar hills coming into view - Ben Klibreck from an unusual angle, Ben Loyal up by Tongue - but we couldn't yet see Ben Hope. Then the distinctive shape of Suilven emerging in a gap between the hills across the way. Views to the north and west became more impressive as we gained height. At a cairned junction we turned left to contour round the north side of the hill. The path disappeared under the only snow patch we encountered all day so we climbed above it heading for the col between the twin tops of the hill. 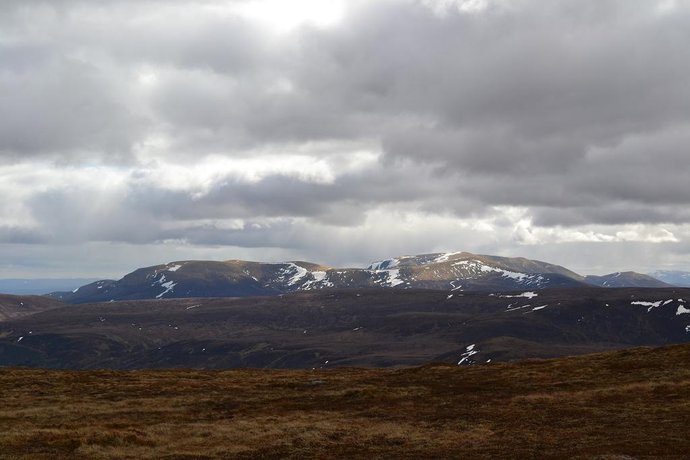 Standing scanning the horizon from the summit we could clearly see Ben Hope and Ben Loyal to the north and the Cairngorm range to the south - which is some distance to be seeing with the naked eye on a dull cloudy day. For all the dark cloud the visibility was remarkably good and I could see further than a week earlier in the haze of a sunny day in Glen Strathfarrar. I didn't expect that at all. Moira has a better zoom on her camera Out of deference to my toe we decided against the option of taking in the western summit since it would involve crossing boulders and instead headed straight down towards the snow patch where we would find the path.

Easy walking from the summit Once back on the track we made good time back to the car. On the way up we had seen a large herd of hinds spread out grazing on the slopes of Carn Dubh and they were still there on the way down. But we saw no stags until we noticed a group watching us from the bank above the road as we walked down the glen. Their interest in us may have had something to do with the appearance of potatoes lying at various stages along the road, some of which were whole, some squashed and some with a definite bite out of them. They hadn't been there in the morning and we guessed they had been dumped along the road to feed the deer. When we were having food in Bonar Bridge later we asked the girl who served us about it and with her dad being a gamekeeper she knew. They're a supplement to the deer's natural diet to build them up at the end of winter.

We were longer in the hotel than we intended and came out into the glow of what (if we'd been a bit earlier) would have been a stunning sunset. Part of me wished we'd still been up the hill to see those amazing shapes with the orange sky behind! It had been a much better day than I expected and despite the heavy cloud cover and general dullness we got some fantastic views - to Ben Hope in the north to the Cairngorms in the south. My toe was none the worse for the jaunt and three cheers for that great stalker's path! Yes that one of Moira's is a cracker! Thanks Jonny.

You have my sympathy walking on a bad toe, ouch! Glad you got good views despite the cloud

KatTai wrote:You have my sympathy walking on a bad toe, ouch! Glad you got good views despite the cloud

Thanks KT - views were so much better than I expected.

Lovely report and pics. This is a grand wee hill, you got some very clear shots. I quite fancy doing this on a clear winter day, next year perhpas

Thanks for the info about deer being fed tatties

A hill I knew nothing about, but now what to climb thanks to your excellent description and photos.

Oh thanks for posting, brought back some lovely memories of when my Sister used to work at the lodge

Re losing your report - after it first happened to me, I started writing them in Word instead. Using flickr means I can also add the photo links in as I go - all saved in Word so then just a case of copy/paste into WH - cheers

, amazing how far you could see, I love the views I've gotten from the few Corbetts I've done.

That is one hellowa Tree house

Hope the toe gets better soon

Huff_n_Puff wrote:Lovely report and pics. This is a grand wee hill, you got some very clear shots. I quite fancy doing this on a clear winter day, next year perhpas

Thanks for the info about deer being fed tatties

A good one for winter and if you bring your chip pan you're sorted.

Mal Grey wrote:A hill I knew nothing about, but now what to climb thanks to your excellent description and photos.

A great hill with fantastic views if you get clear day!

basscadet wrote:Oh thanks for posting, brought back some lovely memories of when my Sister used to work at the lodge

From what I saw looked a good place to work.